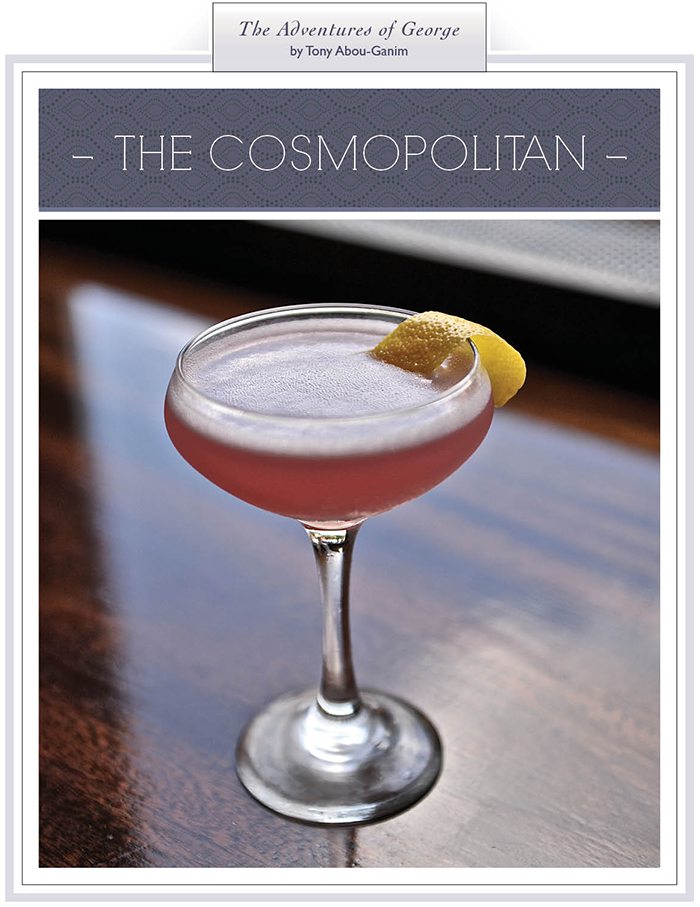 George was in Las Vegas for a convention, and as is his commitment to make time to enjoy the fruits of his labor, he arrived a couple of days early to visit some of his favorite bars, restaurants and bartenders. His first stop was Rick Moonen’s Rx Boiler Room inside the Shoppes at Mandalay Place. George grabbed a seat at the bar, which was bustling with the happy hour crowd. 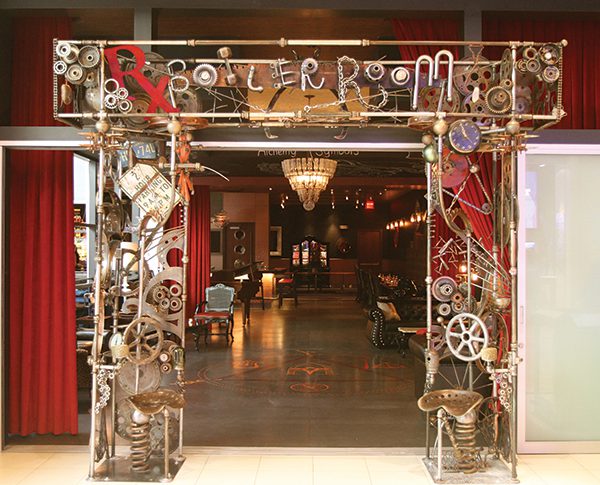 “George, good to see you! Welcome back,” greeted the bartender.

“Hello, Eric! Good to see you, my friend. I could really go for one of your wonderful Negronis and an order of the Bacon Wrapped Bacon-N-Egg, please,” he replied. 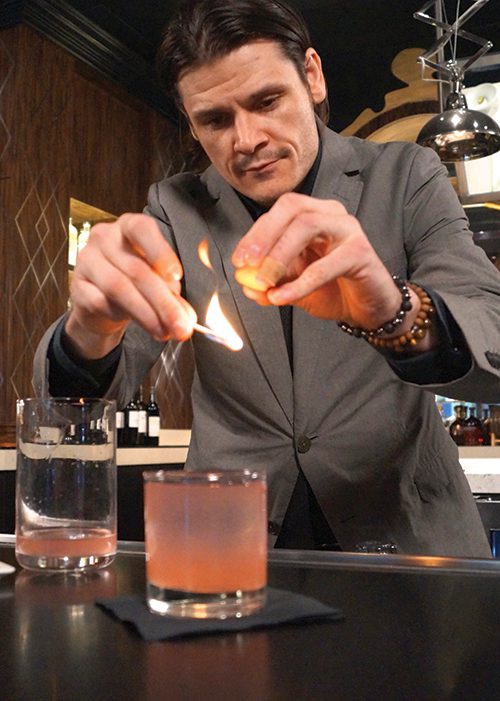 “With pleasure. You may also want to check out our latest cocktails,” Eric replied, handing George a menu.

As George perused Eric’s new cocktail menu, he was served his Negroni, followed quickly by the bar’s signature appetizer. One bite and he was reminded why this was one of his favorite spots in Las Vegas. George was attentively watching Eric prepare a round of cocktails as he took the final sip of his Negroni.

“Can I fix you another?” Eric asked.

“What did you just make?” George inquired. 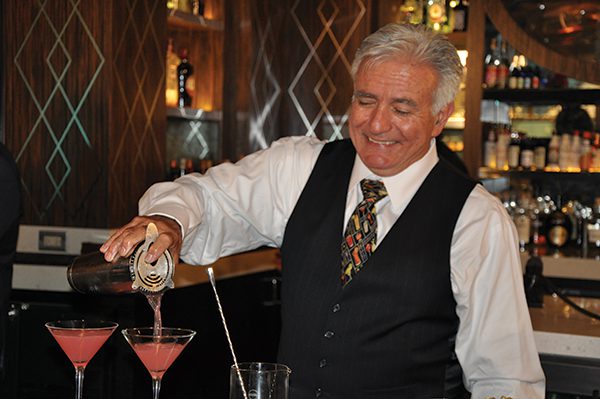 “Made a Cosmopolitan for Dale DeGroff. It’s his recipe, with his signature burnt orange peel garnish,” Eric replied. “He’s sitting with Rick. You should say hello.”

“I’d love to meet him but first I’ll try one of his Cosmopolitans,” George responded.

Eric prepared the drink and led George down to the end of the bar where Rick and Dale were sitting. “Rick, you know George, and this is Dale DeGroff,” Eric said, introducing them.

“Hey, Rick, good to see you. Dale, it’s a pleasure,” said George, shaking hands. “I’m having one of your Cosmopolitans. I forgot how good they are.”

“Well, thank you but I didn’t create the drink, but I did have a hand in perfecting it. As the story goes, it was supposedly first mixed by a bartender named Cheryl Cook in South Beach. Absolut launched Citron in 1988, at the height of the ‘Martini craze’ and she mixed it with a splash of triple sec, a few dashes of Rose’s Lime Juice and some cranberry juice to turn it pink, and called it a Cosmopolitan,” Dale explained.

“I discovered the cocktail a few years later at the Fog City Diner in San Francisco. In 1996, I put it on the menu at the Rainbow Room, where I tweaked the recipe slightly to Absolut Citron, Cointreau, cranberry juice and fresh lime juice, along with a flamed orange peel garnish. It’s wonderful – very well balanced, complex and just plain tasty,” he continued. “I have not had one in years. It truly is a delightful cocktail when made well, and Eric makes them very well,” Dale continued. “If you want to know more about the evolution of the Cosmopolitan, you should track down this cat Toby Cecchini, who runs a joint called The Long Island Bar in Brooklyn.”

George finished his Cosmopolitan, paid his check, thanked Eric for his hospitality and said goodbye to Rick and Dale. He was now very curious and thought that a trip to New York would not only be a way to learn more about this elusive tipple, but he could also take in a Broadway play and eat at one of his favorite restaurants, Mario Batali’s Lupa. He arrived in New York the following week, checked into his hotel and immediately grabbed a cab for Brooklyn.

“Great old spot that just re-opened a couple of years ago. Definitely worth the trip,” replied the cabbie.

He arrived just as the bar was opening and was still rather quiet. He grabbed a stool at the long, vintage bar and was quickly approached by an attentive bartender who presented him with a menu and a glass of water. 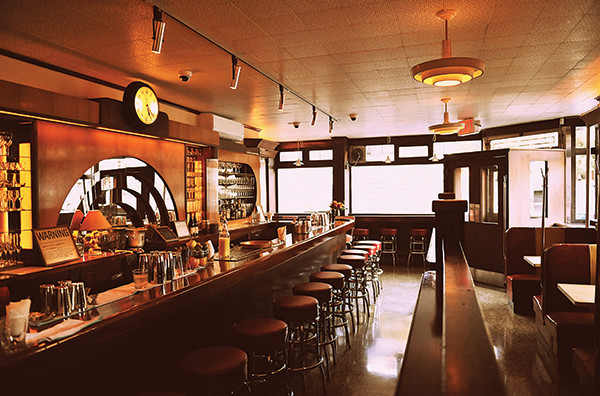 “Welcome to the Long Island Bar. What can I offer you?” the bartender inquired.

“I would love to try your Cosmopolitan and I’ll also be having dinner,” George answered.

The bartender prepared George’s cocktail, working skillfully yet quickly, and placed it in front of him. George immediately noticed the lemon twist adorning the drink. “This truly is a lovely bar,” George commented to the bartender, as he perused the dinner menu.

“Thanks. It was originally opened in 1951 by Ramon Montero and then was run for over 50 years by his daughter, Emma Sullivan. In 2013, Toby Cecchini and Joel Tompkins restored and re-opened it,” he explained. “How’s your Cosmopolitan?”

George found the Cosmopolitan to be bright, crisp and very well balanced. “It’s delicious. I believe I’ll have another, as well as an order of the Grilled Octopus and the Merguez Frites,” he responded, adding, “Any chance Toby Cecchini is available?”

“Let me check,” he answered.

The bartender served George his second Cosmopolitan and the grilled octopus as a gentleman approached him. “Hi, I’m Toby Cecchini; nice to meet you,” the man said, introducing himself.

“Nice to meet you, Toby. I just met Dale DeGroff in Las Vegas and he suggested I pay you a visit if I wanted to learn more about the history of the Cosmopolitan,” George explained.

“And you came all the way to Brooklyn to get my story? Well, I am flattered. First of all, I did not invent the Cosmopolitan, but I did have a hand in developing the recipe everyone knows today.” He continued,
“I was working at a bar called Odeon in 1987 with a woman named Mesa, who drank a drink called a Cosmopolitan at the Life Café in San Francisco. It was made with vodka, Rose’s Lime Juice and grenadine. I didn’t like the drink but I did like the way it looked, so I attempted to improve it. My version was made with the newly-launched Absolut Citron, Cointreau, fresh lime juice and cranberry juice, finished with a twist of lemon.”

“So your recipe is very similar to Dale’s, except for the difference in garnish,” George clarified.

“Very close. The ingredients are pretty much exactly the same but our proportions are slightly different – that, and the garnish,” he explained. “Back then, there was no social media but the drink really took off when Madonna was pictured sipping one at the Rainbow Room Grammy party; and, of course, there was ‘Sex and the City.’”

“Well, your version is fantastic and it works great with the Merguez Frites,” George praised.

“Glad you’re enjoying yourself. I sure hope your visit was worth the trip,”
Toby replied.

“It sure was. I not only have a newfound appreciation for this fantastic libation, but I also discovered a wonderful new bar with a wonderful host!”

George returned to Las Vegas with a better understanding of the creation of this contemporary classic cocktail, even if it may ultimately be impossible to say for certain who is responsible for its invention. There is one thing for certain: This is a drink that truly benefits from using the proper top-quality ingredients. To substitute inferior products is to cheat one’s self of the experience it was designed to provide. 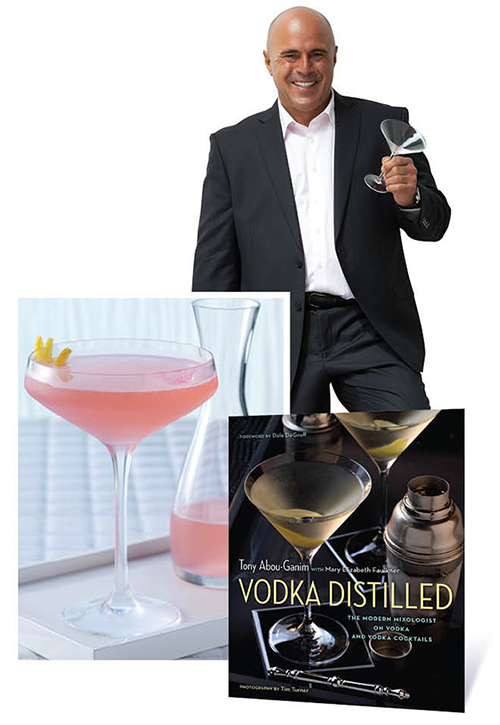