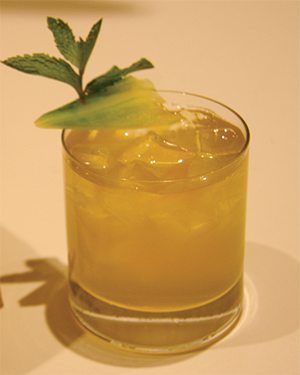 Clark Gable was known as “The King of Hollywood.” Gable played famous roles such as Rhett Butler in “Gone with the Wind.”  He also starred in “Mutiny on the Bounty” where parts of the movie were filmed on Catalina Island, a popular local SoCal destination for travelers to relax and re-energize! Gable loved rye whiskey and his drink of choice was usually a good rye with ginger ale. In honor of Clark Gable, we have created The King’s Drink, a perfect combination of Jim Beam Rye Whiskey and Fever Tree Ginger Beer, with a modern twist. We use fresh mint from our on-property living herb wall and the cucumber creates a re-energizing crisp note, similar to a SoCal summer breeze.

Muddle mint and cucumbers in a pint glass. Add ice and rye whiskey, then shake and double strain into a rocks glass full of ice. Top with ginger beer. Garnish with a cucumber and mint leaf. Let the kings enjoy!