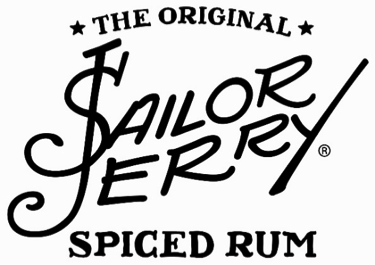 (New York, NY – September 28, 2015) American originals, Sailor Jerry Spiced Rum and Schott NYC, have partnered to produce limited edition items, a Navy Pea Coat and leather-wrapped flask, to celebrate the U.S. Navy and the upcoming 240th Anniversary of its founding. The two true blue Americana-steeped brands share a naval tradition and authentic history with the U.S. Navy. Sailor Jerry Spiced Rum was created to honor Norman “Sailor Jerry” Collins, a Navy vet who built his rep inking soldiers and sailors in WWII-era Honolulu where he established his legendary tattoo parlor and himself as the undisputed father of American old school tattooing. Schott NYC was commissioned by the U.S. Navy to create pea coats to keep U.S. servicemen warm while fighting for freedom during WWII. The limited edition coats and flasks will be released for sale on October 13, 2015, which marks the 240th Anniversary of the founding of the U.S. Navy. 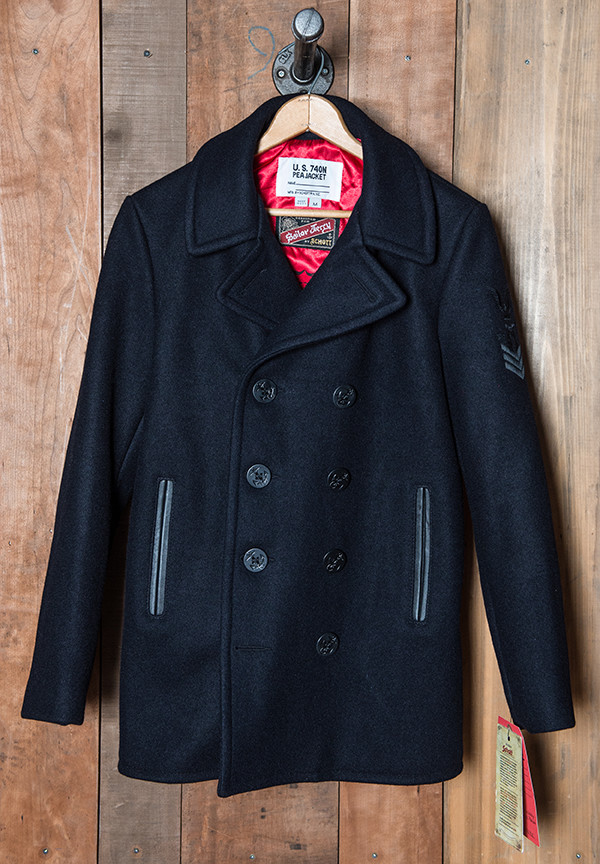 The Designed for Sailor Jerry by Schott NYC pea coat features a wool blend shell completed with goatskin leather trim classic anchor buttons. The red poly satin lining is decorated with Sailor Jerry flash artwork depicting a naval ship flanked by two pin-up style women. Images of ships and pin-ups played a significant role in the work of Norman “Sailor Jerry” Collins because of his time in the Navy. For a sailor, ships are both practical and metaphorical. It’s where they would go for work – but also for meaning and adventure. Collins loved ships and held master papers on every major type of vessel. His legendary clippers represent both the call to adventure and the determination to be “Homeward Bound.” And they’re eminently seaworthy – Jerry always inked his riggings to be nautically accurate. As for pin-ups, these represent the ideal and extremes of femininity – from maidenly perfection to vixen-ish temptation. The woman inked on a sailor’s arm would be the only feminine form he would see for months. Applying his bold, refined style to the pin-up, Collins created what could be argued as the world’s most iconic pin-ups. 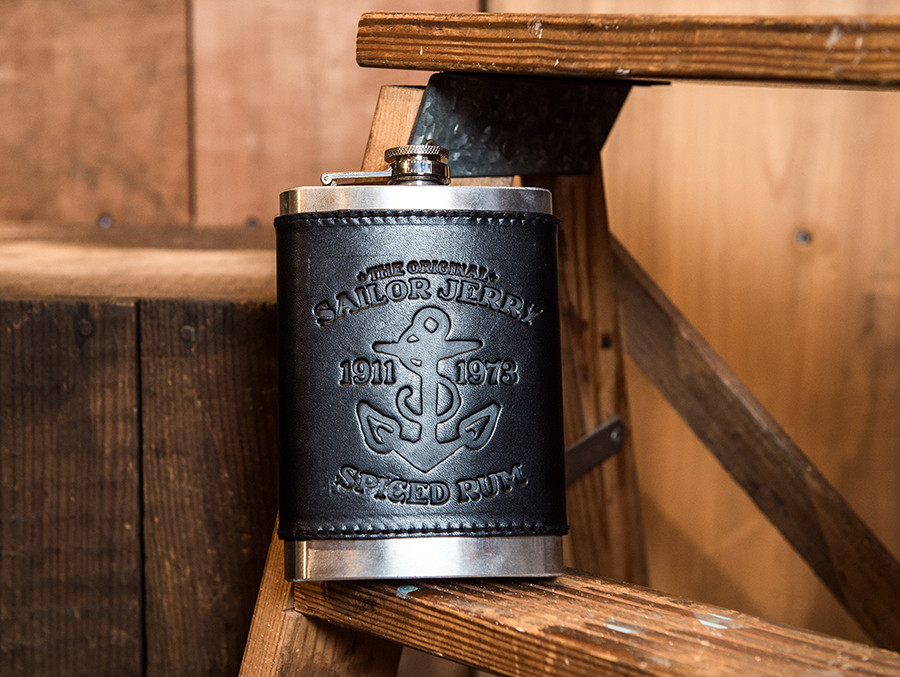 “Norman ‘Sailor Jerry’ Collins was an American original driven by a hunger to originate and create, and to live life according to his own rules,” shared Paul Monahan, Sailor Jerry Spiced Rum Ambassador. “His time in the Navy had a profound impact on his life and work yielding amazing art, breakthrough innovations in tattooing, and one hell of a legacy that continues to inspire similarly forward-thinking individuals today. We created Sailor Jerry Spiced Rum to honor the man, and the brand celebrates all of his personal passions – from the military tradition and inked community, to motorcycles and rock n’ roll, to those people and partners who live their lives according to their beliefs. For that reason, this collaboration with Schott NYC is perfect.”

Schott NYC was founded in 1913 by brothers Irving and Jack Schott when they started making raincoats in a basement on the Lower East Side of Manhattan. By the mid-twenties, Schott NYC was revolutionizing the way Americans dressed for the outdoors when they were the first to put a zipper on a jacket. Eager to innovate, it was no surprise that Irving Schott then set his sights on another American classic in the making – the motorcycle. In 1928, Irving Schott designed and produced the first leather motorcycle jacket. Retailing for $5.50 at a Long Island Harley Davidson distributor, the Perfecto, as the jacket was known, was durable, rugged, and immediately embraced. To this new generation of “bikers,” the Perfecto was a symbol of the excitement, adventure and danger that fueled their fascination with motorcycles. Schott’s association with the military began at the start of WWII when Schott designed and produced a “bomber jacket” for the U.S. Air Force, and the wool pea coat for the U.S. Navy. Rugged and warm, these leather and wool jackets would be produced by Schott for the U.S. Military for the next 60 years.

“Over the past couple of years, we have partnered with Iggy Pop and Paul Simonon to create limited edition items. Like those great artists, Schott NYC has an amazing history of originating and innovating, and their tribe is our tribe,” added Monahan.

Following WWII, the U.S.A. experienced a new rebellion, one that would be fought with fast cars and Rock and Roll. In 1954, the now cult classic “The Wild Ones” featured the hot young actor, Marlon Brando, perched on his motorcycle wearing his Schott Perfecto®. It is said that James Dean could hardly ever be seen without his Perfecto®. Throughout the ‘70s and ‘80s, Schott became synonymous with the punk rock movement. The current wave of rebellion came to the streets of downtown New York City through underground music venue, CBGB. The Schott Perfecto® was the uniform for rock stars like The Ramones, Blondie, Joan Jett and The Sex Pistols.

“When Sailor Jerry Spiced Rum called to ask if we wanted to collaborate on these pieces, that celebrated our shared heritage and ethos, we said yes. Norman Collins is an amazing figure, and the brand that bears his name celebrates the same lifestyle, the same spirit of a rebel that embodies Schott NYC and has made us the authentic choice for generations of leaders and rebels, those who choose their own path forward. These pea coats and flasks celebrate that spirit,” shared Jason Schott, 4th Generation and COO, Schott NYC.

The Designed for Sailor Jerry by Schott NYC flask features full grain cowhide leather and stainless steel. The flask is a companion piece to the jacket (though available separately) and is a nod to both Sailor Jerry Spiced Rum and the spiced rum tradition among sailors. Spiced rum is considered the unofficial spirit of sailors everywhere. This goes back to the mid-17th century, when sailors were often paid in rum, and would spice it on board their ships. Around this time, rum became responsible for the spirits term ‘proof’ as sailors seeking ‘proof’ that their rum rations were not watered down would request the shipmaster light the rum with a spark of gunpowder.

For more information on Sailor Jerry Spiced Rum and the Designed for Sailor Jerry by Schott NYC collaboration, please contact: