By Jack Robertiello
Courtesy of “Flavor & The Menu”

Ask any world-observing brewer what today’s beer drinker wants, and the answer is universally the same: new, local and different.

Craft beer is increasingly more important on-premise. According to Technomic, total craft beer sold in bars and restaurants now outstrips retail volume. Craft beer accounts for more than 11 percent of volume and 14 percent of value of the $100 billion 2014 U.S. beer market, according to the craft-minded Brewers Association. While overall beer sales are down slightly, craft brew sales have maintained their annual double-digit increases for some time. As big brewers scoop up mature craft players, restaurant operators can expect pressure not only from their customers but also from suppliers to continue to modernize their flavor offerings.

Much of the growth is coming from the broadening range of beer styles: hoppy IPAs, funky and fruity Belgian types, sours, beers brewed with non-traditional ingredients or aged in wine or whiskey barrels, and shandies and radlers, two low-alcohol thirst quenchers. There are even a handful of adult root beers now being sold.

At the same time, the cider boomlet continues, both in restaurant sales and the opening of new cideries. While the volume is still small, growth of 12 percent or more per year is expected to the end of the decade, according to international research firm Canadean.

The newly opened Wassail cider bar and restaurant in New York offers a dozen ciders on tap, many of them from popular cider-making regions in America.

Operators are finding that the taste for the new is here to stay.

“The macro trends around variety-seeking are touching on every aspect of the restaurant industry, and that’s finding its way to the bar,” says Lee Dolan, senior vice president and chief marketing officer at the Red Robin casual dining chain. “Variety and customization has been a platform of Red Robin for a long time, so we easily adapt. The mainstream trend, compared to a decade ago when beer drinkers were loyalists and craft beer explorers were a much smaller group, has changed. In the last five years we’ve seen craft beer go more mainstream, and our guests are now really open for exploration, which gives us the opportunity to give them a range of domestics, ciders, crafts, national and local, and imports.”

It’s something most beer-focused operations have noted. Buffalo Wild Wings execs have said publicly that beer – the chain’s third best-selling menu item accounting for 75 percent of the chain’s alcohol sales – is now about one-third craft, with unit general managers now given more choice in their brew selections.

Gordon Biersch Brewery restaurants have traditionally focused on pure German-style beers. That is until very recently, according to Tom Dargen, director of brewing operations for the 34-unit chain. “We’re not getting away from that, but we’ve decided we need to open that up quite a bit. The biggest trend is people want to know what’s next, new and special.”

Now most units are producing Belgian- and American-style beers as well, including sought-after craft beer ingredients like citra hops, a signature of the craft beer IPA explosion. The chain has shifted from offering five German styles plus a seasonal, to two flagship styles plus a seasonal, and as many other styles as their taps will allow. Unit brewers increasingly control what is made based on personal and customer preference, including sour beers and barrel-aged brews.

Dolan says Red Robin has loosened mandated lists to allow more local beers to be added at individual units. “We make sure our guests will have safe choices, but now there’s an increasing percentage of folks who come in looking for whatever it is that happens to be their regional brewer.”

This is not to say that the international mega-brewers, while they have been losing their massive share of beer volume, don’t still have an enormous role to play; few chain restaurants operate without a substantial portion of their list dedicated to well-known brands. “For chains, the bottom line is that the major domestics still drive volume, and many are grappling with how many tap handles to devote to craft. In recent discussions about the category, I’ve not heard one chain operator say they’re taking the major domestics off-line to allow for craft brews,” says Donna Hood Crecca, senior director of Technomic’s adult beverage resource group.

Crecca notes that research published in the firm’s On-Premise Craft Beer & Cider Consumer Study shows consumers put amber ale, lager and pale ale atop the list of frequently ordered craft beer styles, with IPAs further down in the rankings. “Interestingly, high IBU (International Bittering Units) can increase the likelihood of a craft beer order for about a quarter of consumers, pointing to interest in hoppy beers for some. Also, an interesting style would make one third of consumers likely to order a craft beer, indicating the importance of a unique style,” she says. 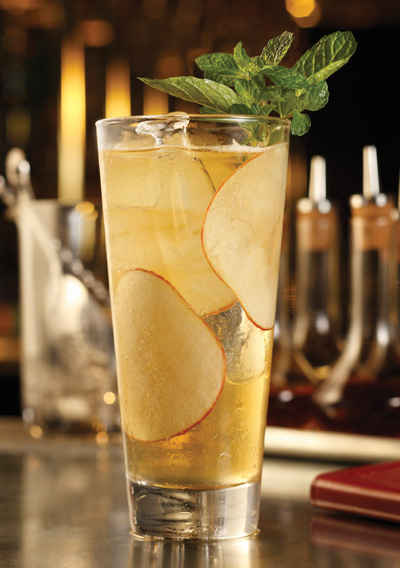 At Bardot Brasserie at the Aria Resort & Casino in Las Vegas, the cocktails are designed to pair well with the rich cuisine. The Voltaire combines a cider base with baked apple bitters and house-made ginger syrup.

Limited-release or house-only beers are making an impact as well. Bardot Brasserie in Las Vegas, at Aria Resort & Casino, has included a beer made just for the operation. “Our goal is to provide experiences that are unique to our outlets for our guests,” says property mixologist Craig Schoettler. “If we offer the same products as everyone else, why should a guest come to Bardot? Having a Parisian brasserie feel, we wanted to include beverages that speak to the cuisine. Hors D’Age is a highly effervescent, clean crisp beer that pairs extremely well with the food from chef Josh Smith.”

Bardot also offers a selection of high-acid, moderately sweet Norman ciders which pair well with some of the rich dishes. “Wine is still king in this regard but the guest is starting to look for new and exciting ways to dine,” Schoettler says. “With the guest becoming more educated about food and beverage, it gives us the opportunity to continually educate on products that may not be as familiar, because the guest is more willing to try new things.”

Josh Fernands, executive beverage director of the three Washington, D.C.-area Pizzeria Paradiso restaurants, carries about 300 beers and ciders at the Georgetown unit to pair with a creative pizza-based menu, and, even there, he’s finding customers looking for more and newer. “The general public who come into our restaurant have always been adventurous, but the palate has wandered further and further to the more eccentric. Sour beers have become far more popular in the last couple of years, as well as Gose, an old German style brewed with salt, coriander and lactobacillus – a tart, refreshing, low-alcohol beer that we sell a lot.” Pizza Paradiso lists some pricey ciders as well as beers, increasingly the case at many beer-focused operations.

Sable Kitchen & Bar in Chicago is currently expanding its beer selection to include more ciders and artisanal beers. Says bartender Mony Bunni, “The cool thing about Spanish ciders is that they are savory, olive-y and have almost a cheesy funk. They’re so much different than most people expect. Ciders tend to get a bad reputation for being sugar bombs, but that’s not always the case.”

While chain operators have added one of the national cider brands, outliers are going all the way. Wassail in New York City is one, carrying about 90 bottles primarily from the United States but also from France, Spain and the U.K., with another dozen or so rotating on tap since its recent opening. Cider aficionados make up a significant portion of Wassail’s clientele, but novices looking to learn have also bolstered the restaurant’s ability to bring in rare ciders. New York state, long an apple-growing center, is awakening to consumer thirst for local, authentic and seasonal. Wassail Restaurant Manager and Cider Director Dan Pucci says, “When we offer ciders from the Berkshire Mountains or the Finger Lakes, it makes a connection with people in a real way, because maybe their family lives there or they’ve visited the region. As for local, the advantage cider has is that all the ingredients are truly local in a way that craft beer, often brewed with raw ingredients sourced from thousands of miles away, isn’t.”

THE NEXT STEP: COCKTAILS 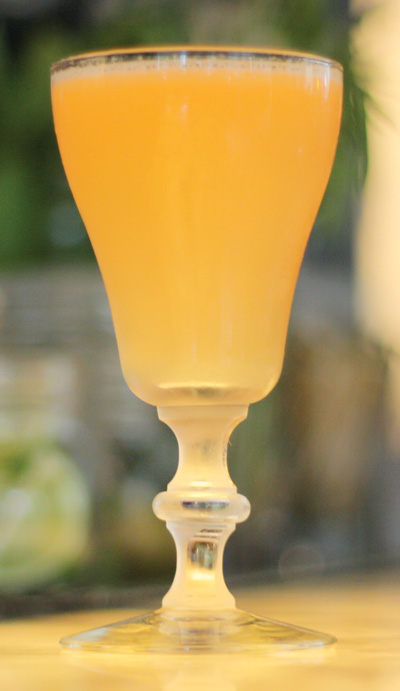 As the ubiquity of craft beer and cider grows, more and more operations are trying their hands at cocktails that include them. Jacob Grier has devoted an entire book to it: Cocktails on Tap: The Art of Mixing Spirits and Beer (Harry N. Abrams, Inc., 2015). After exploring the beer cocktail, starting in 2009 with the bitter and aromatic IPAs being produced in the Pacific Northwest, he started researching historic recipes and developing contemporary twists. Grier says he’s found that virtually everywhere beer has been produced, some form of mixed-ingredient drink became popular, especially as the weather warmed. “It’s the versatility of beer that makes it interesting – from simply adding a shot of something, as in the Picon Biere, to making beer syrup and using that. It’s definitely catching on. I have recipes from all over the country,” he says.

At Bardot Brasserie at Aria Resort & Casino in Las Vegas, cider is often used in cocktails in the fall when apples and pears are in season. “It’s great to add slight effervescence and bubbles to a cocktail and add subtle sweetness,” says Aria’s property mixologist Craig Schoettler.

“Berliner Weisse and Gose-style beers mixed with blackberry or woodruff syrup or something like that is becoming very popular,” says Gordon Biersch’s Tom Dargen. “Shandies and radlers are on the verge of blowing up in popularity. They are a little bit of an acquired taste, but a nice alternative,” he says.

Getting beer cocktails right depends on matching the various elements properly. The goal is either harmony or contrast, with beer serving as the equivalent of soda or sparkling wine or water in a long drink. The traditional German style radler (meaning “cyclist”) calls for half blond lager and half lemonade, though some beer gardens add their own touches of fruit or herb syrups. Probably English in origin, shandies are a loose style calling for ginger beer or fruit juice to cut a beer’s strength. Today, numerous imported radlers are showing up, and even craft brewers are concocting lemon, cherry and other shandy twists.