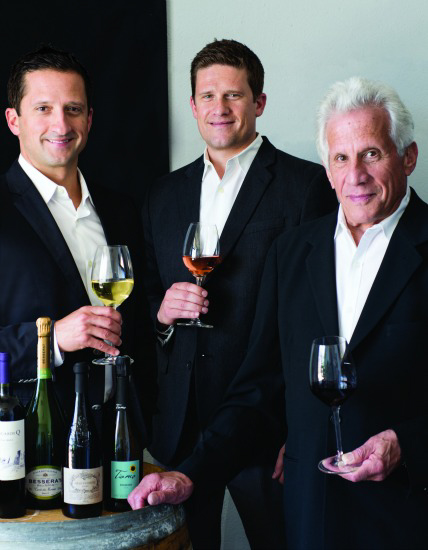 Founded in 1978, this father and sons team celebrates a long tradition of success.

Yale Sager, founder and president of Winesellers Ltd., could not be more proud of his sons, Adam and Jordan, as they assume increasing responsibilities at the Illinois-based importer.

When his sons first joined the company, Yale says he cautioned each: “You’re going to make mistakes. But better to make them earlier.”

“I was absolutely thrilled my sons came into the business,” says Yale. “We have a great portfolio, and a good number are brands that Adam and Jordan created with top-notch people like the Zuccardis [Argentinean wine producers] or Mel Master.”

According to Adam, a third of the importer’s total volume comes from brands he and Jordan created in cooperation with various international wine producers.

“Six years ago, we were selling virtually no Italian or Spanish wines,” says Adam. “Now, they are some of our fastest-growing categories.”

Sales will hit more than 650,000 cases in 2015, according to Adam, vice president of sales and marketing. Jordan, his younger brother and vice president, on-premise, is also involved in major decisions, says Adam, noting all activity takes place “under the watchful eye” of Yale.

With 50 years experience in selling wine, Yale knows a thing or two about the “prescription” for growth. Graduating college with a pharmacy degree in 1962, he joined Walgreens in Chicago.

As a store manager on the city’s Near North Side, Yale worked to upgrade his location’s wine area to include higher-priced fine wines, observing how other area wine merchants catered to affluent customers.

Following a vacation in 1967 where he visited French, Italian and Spanish wine regions, the Chicago-based Jewel-Osco supermarket chain hired Yale as its wine buyer in 1968.

In five years, he built the chain’s wine operation into a $30 million-a-year business. In 1973, he moved to Shaw-Ross, a fine wine and spirits importer, as its Midwest sales representative, overseeing 15 states.

In 1978, eager to run his own show, Yale launched Winesellers Ltd. One of his first sales calls was to Melvyn Master, then a Denver- based distributor. Master introduced Yale to a number of his French wine suppliers, including Georges Duboeuf.

In the early years, Winesellers Ltd. represented Duboeuf. After parting ways in 2003, the company continued to work with many of its longstanding French, German and Argentinean partners, as well as with Master’s wines and many new wine proprietors.

“I am very proud that I have been able to give my sons a base, so that they could fulfill their careers in the wine business and take the company to the next level, which they already have,” says Yale.

Looking ahead, both Jordan and Adam see great potential in the growing selection of Argentinean, Italian, Portuguese and
Spanish wines, as well as the French artisanal ciders that Winesellers Ltd. is now marketing across the U.S.

“These French ciders are a way to engage millennials, mixologists and consumers,” says Adam.

Most of Winesellers’ portfolio is priced between $10 and $20 a bottle at retail, a “sweet spot” for the company, says Adam,
though he adds that additional emphasis is being given to more expensive wines.

Buoyed by his sons’ upbeat outlook, this is sure to be another area for growth, says Yale, and one to make a founding
father proud.

It’s for this tradition of success, growth and expansion that Wine Enthusiast names Winesellers Ltd. its 2015 Importer of the
Year. 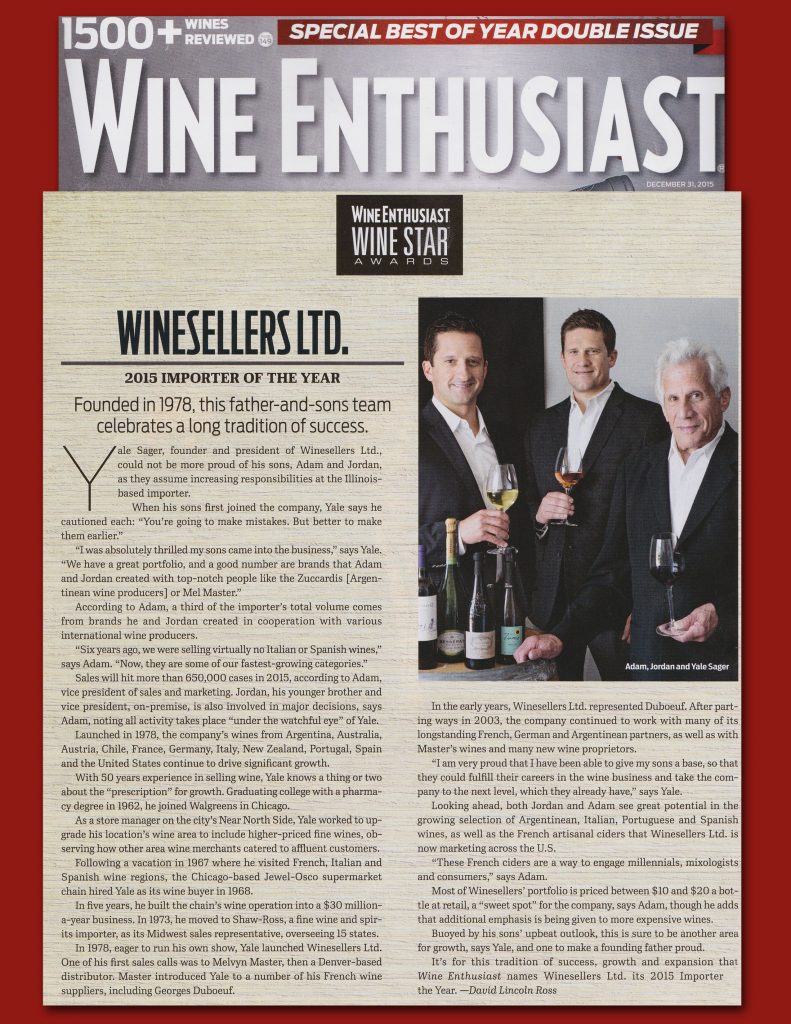