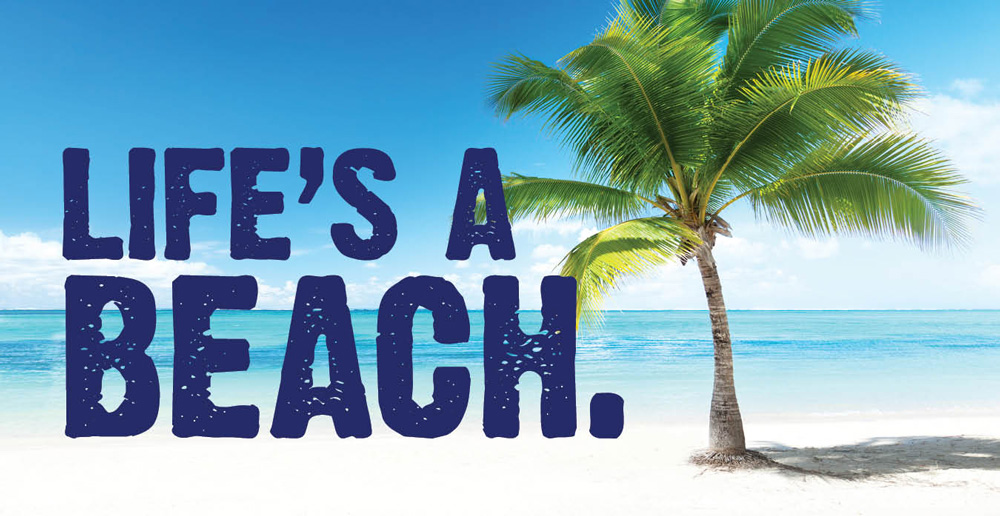 Today, there is no more exciting category than American whiskey. In recent years, the category – led by bourbon and flavored whiskey – has exploded in popularity, and new brands are emerging as craft and major producers alike seek to grab a share of Millennial passion for the spirit. One of the newest premium brands joining the back bar is Beach Whiskey™, launching in Q1 of 2016. We recently spent some time with two of the founders, TV and radio personality Billy Bush and industry veteran J. Smoke Wallin, to talk about their brand. 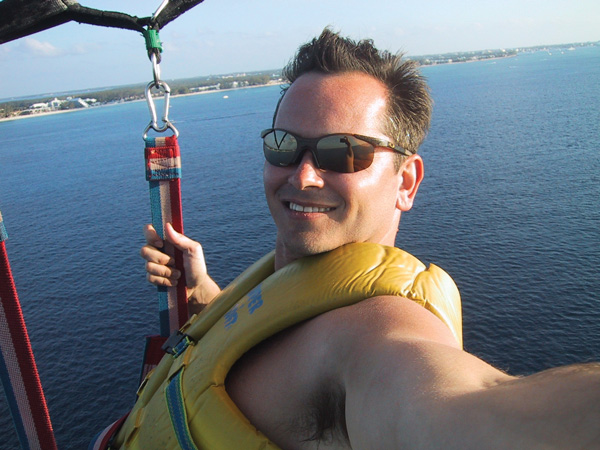 ITM: So why this brand? And why now?

JSW: Beach Whiskey is a whole new take on American whiskey. It’s an exciting time in the drinks industry and the whiskey segment in particular has really caught fire. The tradition of whiskey is interwoven into the American fabric, and the American whiskey craze has captured the imagination of the Millennial generation. While high growth in this segment continues unabated, there are large numbers of this generation of drinkers who want to like whiskey but have not yet acquired a taste for it. Beach Whiskey is made for this generation of new whiskey drinkers while still appealing to the spirit connoisseur.

BB: I love the idea of combining fine whiskey with the beach life. Beach Whiskey celebrates the beach life and all that comes with it: parties, sports, relaxing, good music and having fun.

ITM: How is Beach Whiskey going to stand out from other celeb-backed brands?

BB: The Beach Whiskey partners organically believe in this brand. We’re not just a group of people who are being paid to send out a tweet or two each month. We love the beach and we also all love whiskey! Take my buddy, Andrew McGinnis (entrepreneur and another founding partner) – he is that beach guy. Went to USC, plays volley ball; I think he stand-up paddles to work. His whole life is the beach. He had the initial idea of bringing whiskey to the beach, bringing it to daytime. I knew immediately it was going to be big and very cool, so I said yes. This is one of only two things in my life that I’ve put my money behind. I’m psyched to be in it.

JSW: We have some of the most innovative minds around, including recognized leaders in consumer products, sports, entertainment, media, technology and fashion, as founding partners in this business. They all have an opinion about the bottles, the liquid and the plan. We didn’t give any of the partners a piece of the business; everyone invested. If they didn’t fully believe in Beach Whiskey, they wouldn’t be in it. It’s great to have partners who care. 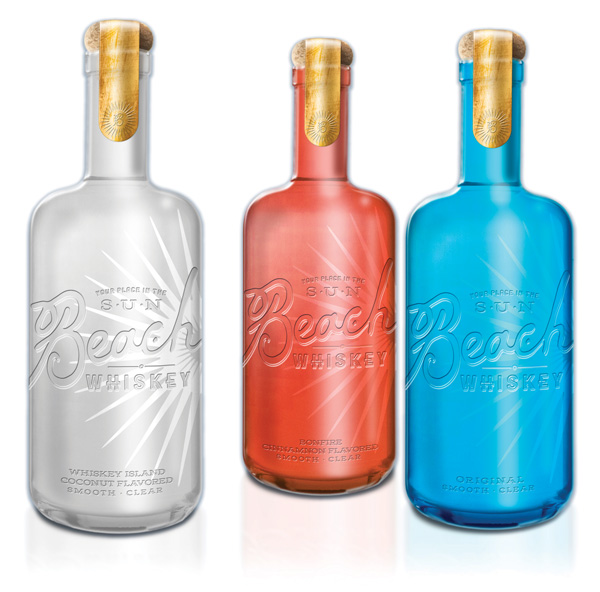 ITM: Speaking of the bottle, it’s really cool. Where did that come from?

JSW: In thinking about packaging, we wanted to create something that would truly be unique and iconic for Beach Whiskey and bring the brand to life. We have all seen beautiful sea glass washing up on the beach over the years, and so the concept of making our bottles out of sea glass was born.

ITM: Sure, the concept of the “beach” works for consumers on either coast, but how are you going to resonate with the folks in the Plains states?

BB: What comes to your mind when you hear “beach”? Sunshine and water, right? No matter where you’re from, the word brings you somewhere. It could be the ocean or a lake, sitting in the sun by a pool or après-ski – you name it. Beach is a state of mind and it usually comes with a smile and friends. Now it also comes with a great whiskey.

ITM: Tell me about the whiskey.

JSW: Our Beach Whiskey Original is 80 proof American whiskey. It is distilled from corn and filtered in a proprietary way, taking out impurities and harshness. The distillation, filtration and blending process makes Beach Whiskey a uniquely versatile clear spirit with significantly more flavor than vodka, while possessing a smoothness that beats traditionally aged whiskeys and harsh un-aged rums. This makes Beach Whiskey a true crossover spirit that can be enjoyed straight up, on the rocks, as a shooter or mixed in cocktails.

Our two flavors will blow your mind. Island Coconut is delicious straight up or in mixed drinks; on the rocks, it’s like a skinny piña colada. Bonfire Cinnamon is what is being called the “adult” version of this flavor. Crisp and clean, with just the right amount of heat, Bonfire is a winner.

BB: The team at Beach Whiskey spent a few months tasting whiskeys and flavors to perfect the recipes and final product. We had more than 250 21+ year-old consumers taste it and vote on their favorite versions. We took their input, tasted everything again and finalized our formulations – it’s been one of the tougher parts of the process, but as they say, someone had to do it!

ITM: Is there anything you can share with us about the marketing plan?

JSW: This is where the partners are really coming into play. We have some great opportunities for visibility through our partners in the music and entertainment industry, and we’re looking at some really innovative platforms with “augmented reality” that will bring Beach Whiskey to life. One of the things I’m really excited about is that we collaborated with Billy’s production company to create a TV show called “Beach Slap,” in which Beach Whiskey is a natural fit. TBS bought it and is producing it during spring break in 2016, giving us national network exposure. 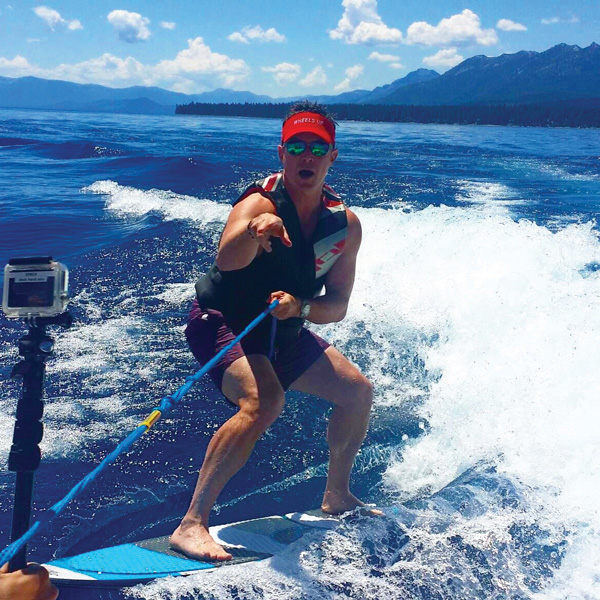 BB: “Beach Slap” is a BIG event reality competition series that pits two new teams against each other each week in a series of fun, sexy, sandy, sweaty and outrageous PHYSICAL competitions at the hottest beach-party-destinations in the world. Think about a combination of Ninja Warrior meets Wipeout during old school “MTV Spring Break.” It will be the wildest beach party in the world and Beach Whiskey will be there.

ITM: What is your favorite way to drink it?

BB: I used to be a martini guy, so I like mine ice cold and on the rocks.

JSW: We’ve worked with a total rock star mixologist out of Indianapolis, and she has come up with some really amazing cocktails. My favorite is the flaming Bonfire Banana Brew.

ITM: You’re on the beach, drinking Beach Whiskey – who’s with you?

BB: Anyone with a really big Twitter following so they can help us get the word out. Failing that, the biggest distributors in the country – I want the world to know about this.

JSW: Consumer desire for a clear, mixable spirit makes Beach Whiskey the perfect new offering for today’s flourishing cocktail culture. Whiskey finally has a place in daytime, in the sun. We take the quality of our whiskey and flavors very seriously, while taking ourselves and our brand with a grain of (sea) salt. Beach Whiskey is fun and whimsical and unlike any other spirit. Join us and raise a glass!

Serve over ice in tiki glass. Garnish with a Mexican cinnamon stick and a splash of overproof rum in a hollowed-out lime wheel. Just before serving, light the rum on fire.