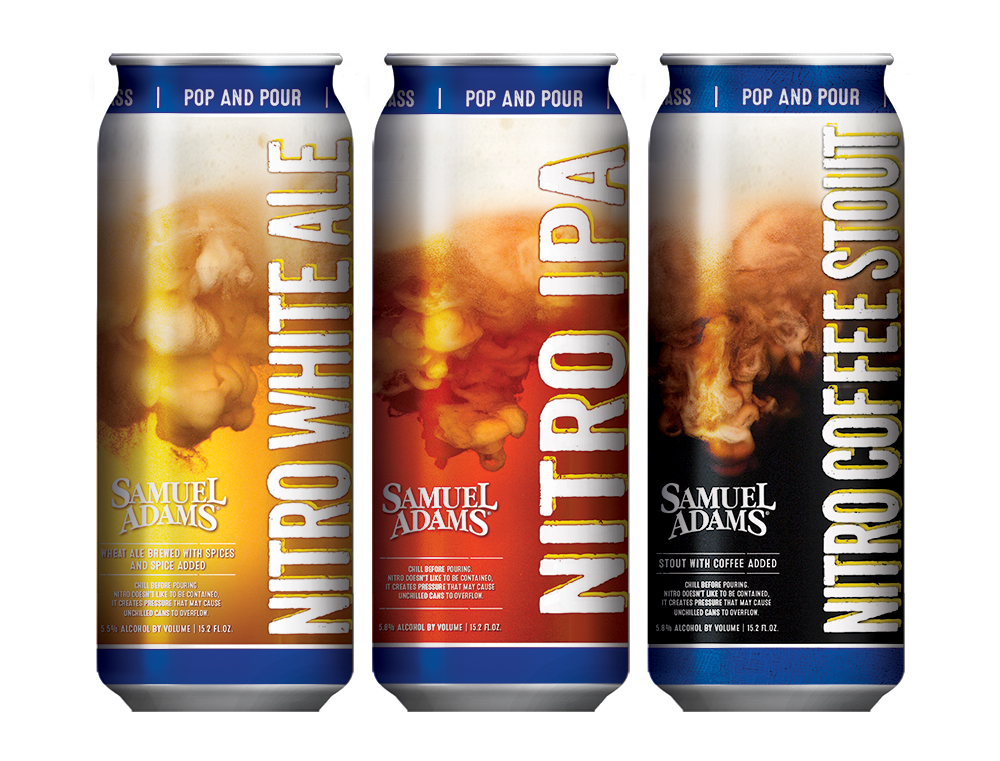 Water. Malt. Hops. Yeast. These are the four traditional ingredients in beer. With the new Samuel Adams Nitro Project, the brewers want you to experience a fifth ingredient: nitrogen, in place of carbonation. After experimenting with countless iterations and test batches in the nanobrewery at the Sam Adams Boston Brewery, the brewers are excited to announce the release of the first three brews from the Samuel Adams Nitro Project – Nitro White Ale, Nitro IPA, and Nitro Coffee Stout. Nitro beers are most commonly associated with stouts, but the brewers stretched the boundaries and started nitrogenating a variety of styles. There are very few breweries that offer nitro beers to drinkers at all, and virtually none that offer a variety of nitro beers in cans on an everyday basis. Nitro beers seemed, to the brewers at Sam Adams, like the perfect way to fundamentally transform the flavor profiles of a variety of beer styles. To fill you in on what makes this project different, the brewers share everything you need to know about the Nitro Project:

What is a nitro beer?

The ‘nitro’, of course, is short for nitrogen gas. All beers contain a significant amount of carbon dioxide (CO₂) when the beer is carbonated as part of the brewing process, but nitro beers use a combination of both nitrogen and carbon dioxide. Nitrogen is mostly insoluble in beer, so the resulting bubbles are smaller and create the rich, creamy texture familiar to nitro beers. On the flip side, beers that use CO₂ generally have larger bubbles and a more pronounced acidity and carbonated texture. Think of the difference between carbonated water and still water. Both are water but the taste experience is radically different. When a nitro beer is poured, it creates a beautiful cascade down the side of the glass, a thick, creamy head and a smooth mouthfeel.

What beers are debuting in the Samuel Adams Nitro Project?

The first three of more beers to come!

Nitro White Ale is a smooth, velvety, medium-bodied brew. Orange peel, coriander and Grains of Paradise lend hints of orange and peppery spice, and the first sip reveals these flavors alongside a light wheat character. When poured, Nitro White Ale shows off a billowing white head and a pillowy body that softly cascades into bright gold. (5.5% ABV)

Nitro IPA is boldly bitter yet smooth. The brew has an initial cap of creaminess, which gives way to hop intensity gathered from Amarillo, Centennial, Galaxy, Polaris, Simcoe, and Zeus hops. The hop varieties lend resinous pine, citrus and floral notes to the amber-bodied brew. (7.5% ABV)

How does nitro work on tap and in cans?

When a nitro beer is poured on tap, it requires a specially-designed nitro faucet. These special faucets have internal plates or “sparklers” with small holes drilled in them, and when the beer is forced through the holes at high pressure, it produces tiny bubbles which create the trademark nitro cascade. The tight bubbles create a creamy, uniform, thick head on the beer. To produce the high pressure, nitro beer is forced out by a nitro gas blend, which is typically 75% nitrogen and 25% CO₂. Because the pour is so important, the brewers stress that nitro beers require a perfect marriage between brewer and bartender. The brewer perfects the recipe in order to gain the desired flavor profile, and the bartender must have the proper draft line and equipment in order to create the cascade and the best possible drinker experience.

In cans, a hollow, cylindrical plastic widget, which the brewers refer to as the nitrogenator, is used to replicate this distinctive nitro delivery. Once the can is popped open, the pressure from the nitro is so intense, the brewers recommend pouring immediately into a glass and pouring straight down the center of the glass for the best possible experience. The result is a mixture of the small bubbles and the liquid in the glass.

What does Samuel Adams founder and brewer Jim Koch have to say about the Nitro Project?

“We started experimenting with nitro beers in the mid 1990’s when we brewed a Boston Cream Ale and over the years, I’d estimate we brewed more than 50 beer styles and worked with 200 recipes to ultimately create these three unique beers. We quickly discovered that you can’t just put any beer on nitro. We needed to develop recipes where nitrogen was the unexpected fifth ingredient and brought out the desired flavor profile of the brew. For example, with the IPA, the lack of carbonation reduces the perceived bitterness by cutting the acidity (carbonation produces carbonic acid on the tongue, nitrogen doesn’t) so without the carbonation we really had to amp up the amount of hops we used. We’re excited for drinkers to finally get a chance to try our Nitro beers and experience the cascade – which is like a science experiment in a glass.”

Where can drinkers find the Sam Adams Nitro Project brews?

Nitro White Ale is available nationwide on draft. Nitro White Ale, Nitro IPA and Nitro Coffee Stout will be available in 4-packs of 15 oz. cans beginning in February for a suggested retail price of $8.99-$10.99 (all prices vary by market).