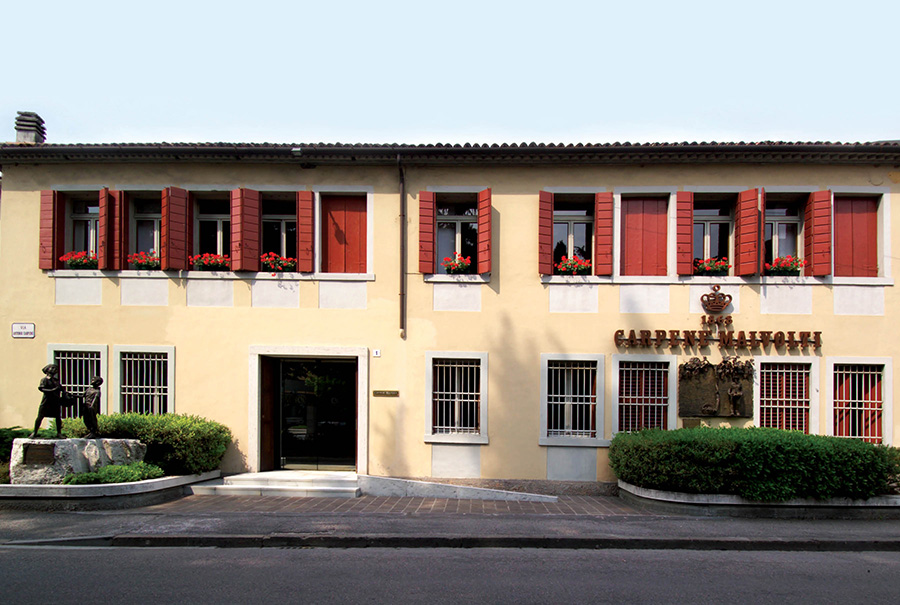 Antonio Carpenè fought to unify Italy under Garibaldi at the Battle of Bezzecca, and then went on to study chemistry at the University of Pavia. It was his love of chemistry and his homeland that brought him to wine. No product more completely expresses the character and quality of a place than wine. Antonio Carpenè dedicated himself to spreading this message throughout his native land.

Carpenè was a remarkable man. Despite having a position as a professor at the legendary University of Bologna, he preferred giving his chemistry lectures while standing on a chair in the local “piazze” (“public town squares”) across the Veneto region, so that everyone could have the benefit of his knowledge. He first founded Carpenè Malvolti winery; then his love of the land, culture and wine led him to establish the Oenology School of Conegliano. Until the Gentile Reform of 1923 (a reform of the Italian educational system), this school was a sort of wine academy and it is still one of the most prestigious institutes in Italy today. 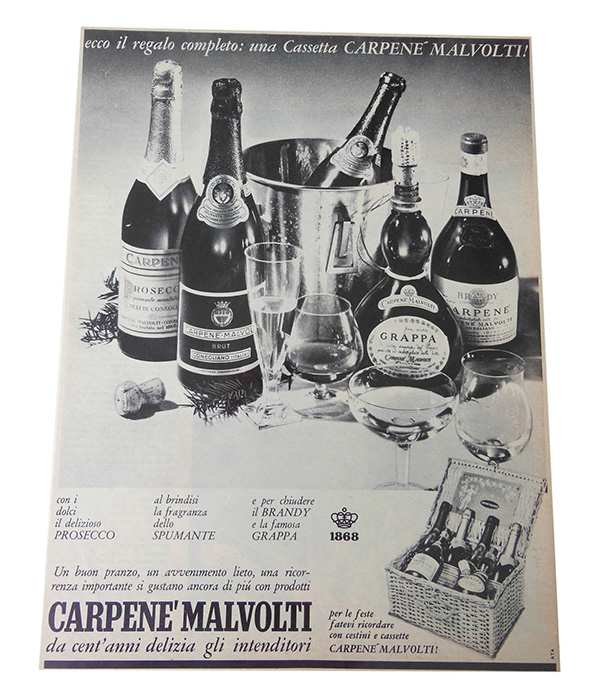 Over the succeeding generations, the Carpenè  family led the way for the wines of Italy in so many ways.

Antonio Carpenè – 1st generation – introduced the Champenoise method in Italy and founded the first Italian School of Oenology in Conegliano in 1876. In 2016, that school celebrates 140 years of training the winemakers of tomorrow. With nearly 2,000 students, it might be the largest technical wine school in the world.

The 2nd generation – Etile Carpenè (Antonio’s son) created the first label reporting the denomination “Prosecco Amabile dei Colli di Conegliano” in 1924, and did the first advertising campaign at a time when the concept of marketing was a distant fantasy.

The 3rd generation – Antonio Carpenè (Etile’s son, grandson of Antonio), who took over the reins in 1934, founded the Consorzio Tutela Prosecco Conegliano Valdobbiadene in 1969 and created “thermical inactivation,” which used cold temperatures effectively in winemaking.

The 4th generation – Etile Carpenè (Antonio the second’s son, great-grandson of Antonio) led the company to its internationalization and played a key role in establishing Federvini, the Italian national wine association. 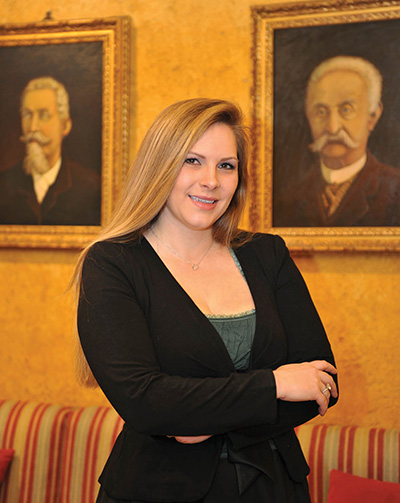 The 5th generation to run the business – Rosanna Carpenè (Etile’s daughter, great-great-granddaughter of the original Antonio), has been working for years in the company and represents a future that has its roots firmly planted in the territory of the Veneto. She continues the family tradition of leadership as well, serving as the president of the ITS, the foundation of the Technical Institute for New Technologies Made in Italy, overseeing the food and beverage sector. Prosecco, born as a dream in the mind of her grandfather, has now become one of symbols of the Italian lifestyle throughout the world. It has also come to mean so much more than a single fine wine.

The original vineyards first used by Antonio Carpenè are now recognized with the highest DOCG quality distinction. Today, the two DOCG zones for Prosecco production, Conegliano Valdobbiadene Prosecco DOCG and the more obscure Asolo Prosecco DOCG, are dedicated to establishing quality and image. The very steep, hilly zone between the communes of Conegliano and Valdobbiadene represents the historical heartland
of Prosecco production, where producers aim for quality by limiting yields, hand-harvesting grapes and
working toward the development of “crus” (“superior vineyards”) in the region. It is from these regions that the highest quality, and most expensive, Prosecco continues to be produced.

In contrast to the DOCG level, Prosecco DOC wines are produced in a more commercial manner and, as a result, are offered at a more reasonable price. With higher maximum yields and less strict production requirements, Prosecco DOC wines have become prevalent on wine lists at bars and restaurants, and as popular additions to cocktails. They represent one of the great consumer values in wine. The combination of bright fruit, bubbles and an affordable price has made Prosecco an international phenomenon in the world wine market.

In 2009, the demand for Prosecco had reached such heights that the region took additional steps to protect the character and integrity of its wines. Tighter regulations concerning the areas allowed to produce Prosecco, the yields in the vineyards and even the terminology used to describe it were introduced. What was once known as the Prosecco grape is now called Glera and all Prosecco must be made from Glera.

Not surprisingly, the production regulations are stricter in the Prosecco Superior DOCG regions than they are in the DOC area, but both are now more firmly defined and protected by the new EU policies for all DOP products. 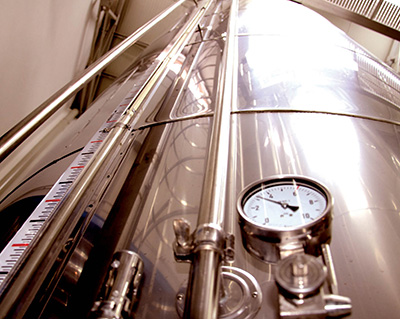 What should you expect from a bottle of Prosecco? The grapes are harvested and immediately pressed with low pressure, extracting very few phenolic compounds and producing very delicate, aromatic juice. This juice is then allowed to settle for two weeks, leaving nothing but the clean juice to ferment. At this point, the juice goes through a first fermentation at about 60 degrees F; then once again, it is allowed to clarify in the stainless steel tanks. Once clear, the wine is then placed in pressurized stainless tanks where it goes through the secondary fermentation that produces the bubbles. It is then bottled and shipped throughout the world.

Pour a glass and Prosecco immediately charms you. The color is pale gold, delicate and clean. The bubbles energetically and persistently rise through the glass. The nose is full of bright citrus, honey and delicate floral notes. And in the mouth, those fresh citrus elements carry through, with a touch of grape-apple occasionally making an appearance as well. And the finish? Bright, lively and refreshing, just inviting you to have another sip and pour another glass. It’s a wine that is obviously and immediately fun to drink, and it has managed to win over millions of young wine consumers all around the planet. 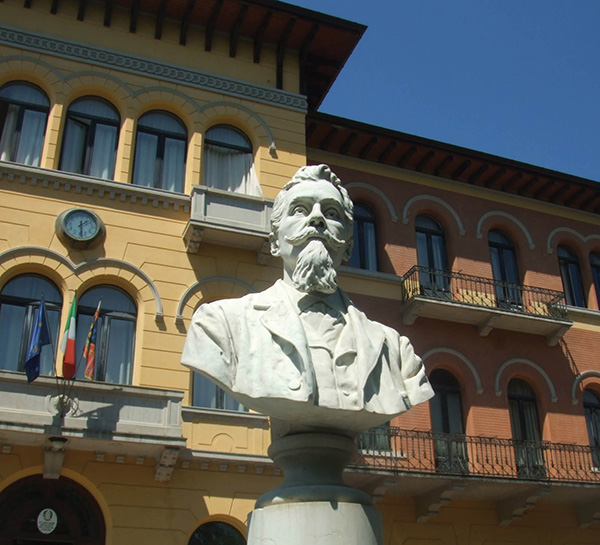 The School of Oenology in Conegliano.

What would Antonio Carpenè think of all of this? He would probably love it. His own company, in close collaboration with more than 100 historical vine-growers, now operates in more than 60 international markets with a selected production of Conegliano Valdobbiadene Prosecco Superiore D.O.C.G., brandy, grappa, and Rosé brut and classic method. The challenge goes on – in fact, it is already moving forward with new initiatives in marketing and communication strategies, trying to anticipate the new trends and consumption patterns. It is safe to say that Prosecco will continue to enjoy a strong following among a new generation of consumers who have come to see it as a delicious expression of joy, as well as the “la dolce vita” (“the sweet life”) of Italy.