In the last quarter’s issue, I provided a primer on wine-based amari, while in this issue I will focus on spirit-based amari and cocktail bitters, which are key components of so many of today’s more interesting cocktails. The category of amaro is confusing because one may find them categorized as liqueurs due to their sweetness levels, but not all amari have sweetness. This article focuses on those potions dominated by botanicals – flowers, herbs, roots and spices – with varying levels of bitterness that are perceived as providing palliative effects on the body. Thus, they are known as “digestivos,” Italian for “aids to digestion,” and have long been a European tradition, especially in Italy. The historical evidence of the origin and evolution of these potions is cloudy, but the tradition of using botanicals for medicinal purposes reaches back millennia. The appearance of industrial amari begins in the late 18th and early 19th centuries.

The botanicals that form the flavor basis to this category of spirits have carminative properties. While the list of botanicals with carminative properties is long and comes from four different continents, the primary ones include: angelica, aniseed, basil, bergamot, cardamom, caraway, cinnamon, coriander, garlic, ginger, juniper, lavender, lemon, licorice, marjoram, nutmeg, onion, oregano, peppermint, rosemary, saffron and tarragon.

Author’s note: There is hardly a village in Italy that doesn’t have a local producer of amari, but my focus is strictly on commercial brands found in the U.S. 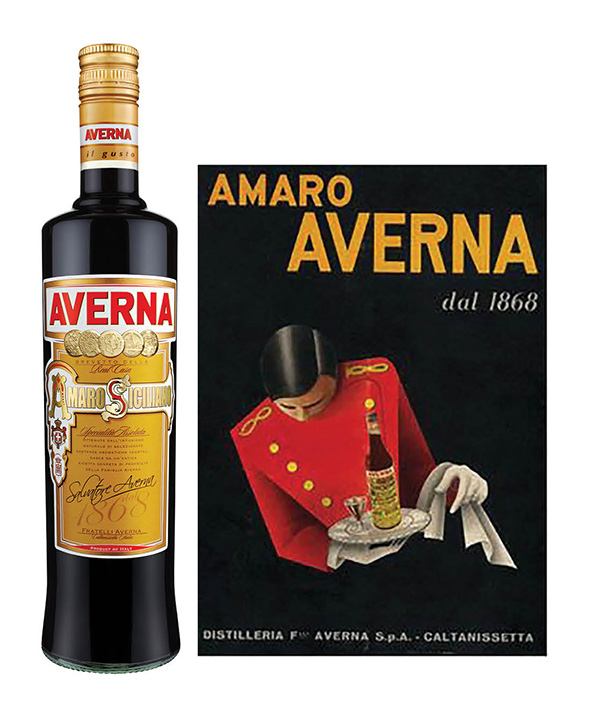 Amaro Siciliano Averna was first created by monks of the Convent of St. Spirito, which gifted Salvatore Averna the recipe for his good deeds. He began producing this amaro in 1868. It is easier for neophytes to appreciate because its bitterness is offset by a full, smooth and sweet component. Because of its sweetness, some categorize it as a liqueur. It has a more cola and sassafras flavor and is more enjoyable neat, but certainly has a place in the mixologist’s repertoire. 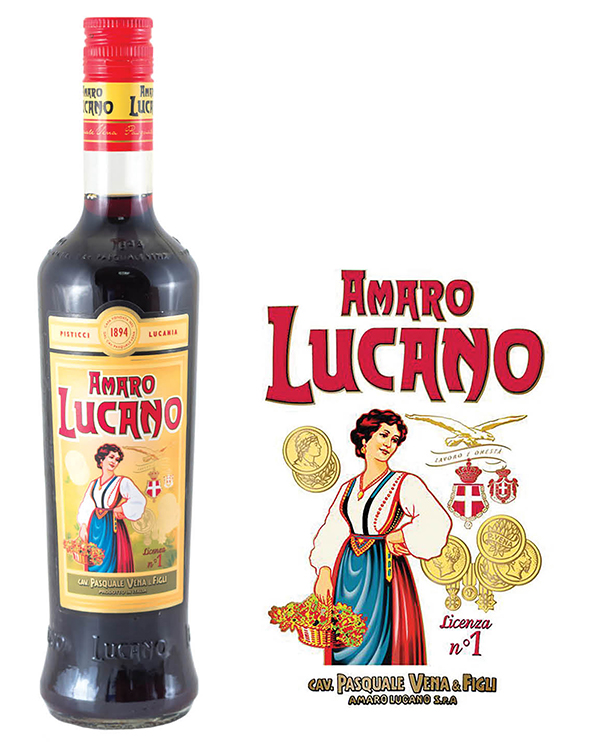 Amaro Lucano was created in 1894 by Pasquale Vena, a pastry chef in the Luciano region of Basilicata. This amaro liqueur’s widespread popularity in Italy was due to its being an official amaro of the Royal House of Savoy. The botanicals, harvested from the surrounding region, include absinthe, wormwood, sage, musk yarrow, gentian, angelica and ruta. The botanicals are macerated in alcohol to extract their delicate aromas and flavors before being decanted and added to a pure spirit/water and caramel liqueur. 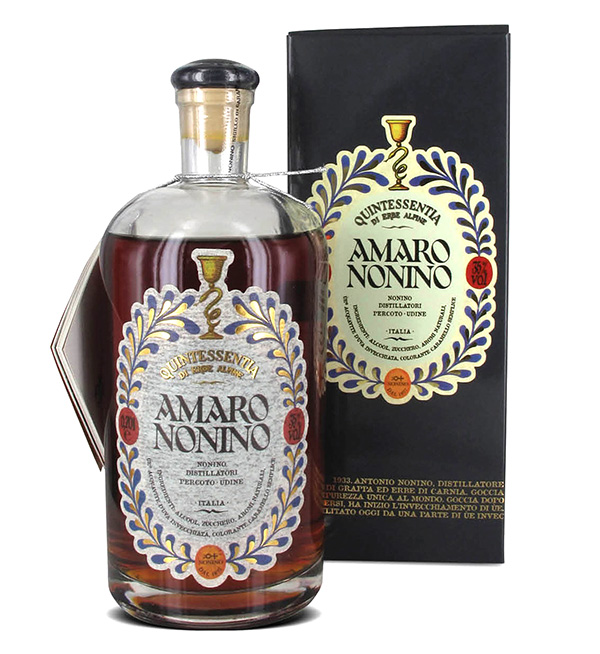 This grappa-based amaro, marketed as Amaro Nonino Quintessentia, hails from Friuli in Northeast Italy. It is an infusion of a blend of botanicals including gentian, licorice, rhubarb, tamarind, cinchona and galangal. It has a reddish brown hue, with bright citrusy notes from the inclusion of sweet and bitter orange peels. It is aged for a minimum of five years in oak barrels, giving it more complexity. It is less sweet, less bitter and has a lighter body than most other amari, making it particularly friendly for  mixologists.

Barrels of Grappa Nonino from 1987 celebrating 90 years of fine distilling. Cristina, Antonella and Elizabeth Nonino each have marked their personal barrels. 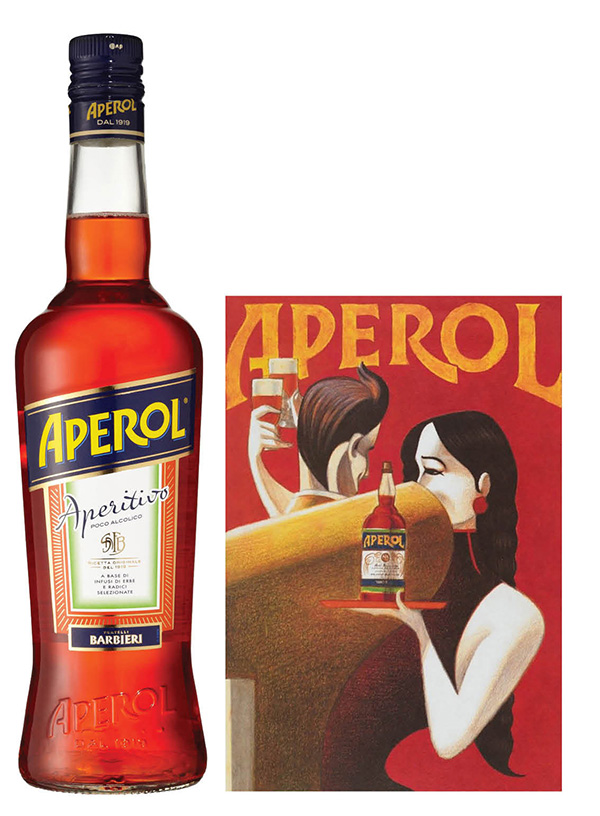 While this amaro was first invented in the 20th century by Silvio and Luigi Barbieri in Padua, Italy, it has become the basis of Italy’s most popular cocktail, the Aperol Spritz. Its low alcohol (11% ABV), attractive orange color, and bright, citrusy notes have been conducive to the pace of modern life. The primary flavors are derived from herbs, sweet and bitter oranges, tangerines, flowers, spices, quina, rhubarb, gentian and vanilla. The classic Aperol Spritz is a combination of Prosecco, splash of soda and Aperol, served on the rocks with an orange slice. This popular Italian cocktail has driven an explosion of interest in the last 10 years in the U.S. 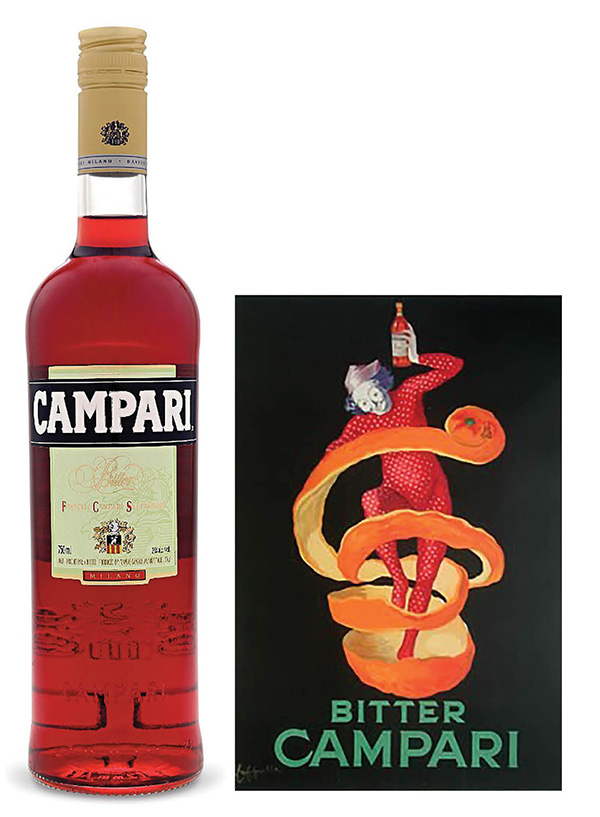 There is no more famous amaro than Campari. It was invented in 1860 by Gaspare Campari in Milan, Italy, using herbs, cascarilla and chinotto (a small bitter orange that grows on a tree similar to myrtle), among many ingredients in this still-secret recipe. It has been recognized for its distinctive red color derived from the use of carmine dye, which was discontinued in 2006. It is Italy’s most popular and widespread amaro, in part for its use in the first Italian cocktail, known as the Americano. That drink was then followed by the classic Negroni, a mix of Gin, Campari and Sweet Vermouth, which defines a bartender’s ability
when made correctly. Why? Because when the ingredients are balanced, there’s a synergy that melds all three seamlessly on the palate. 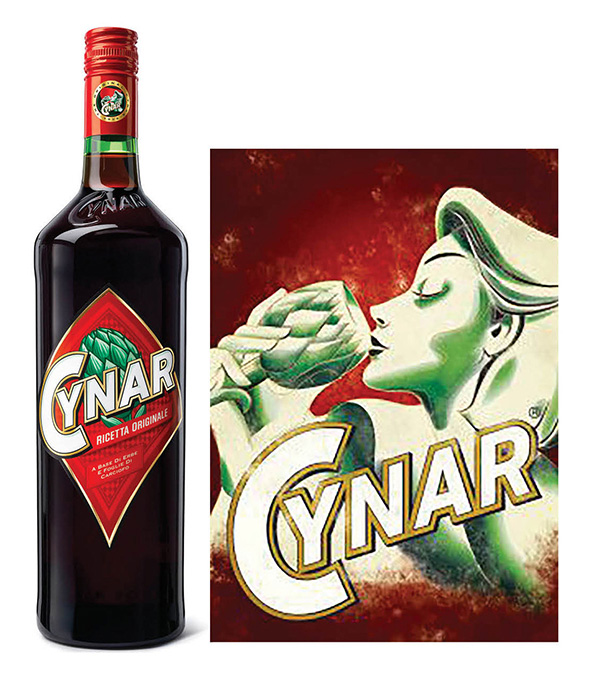 Only recently created in the mid-20th century, Cynar is named for the ingredient cynarine, which is found in in artichokes. It is an essential botanical in this 13-ingredient secret recipe. This amaro is often consumed neat or on the rocks, but mixologists find it useful because it adds a vegetal/herbal element to some spirits with more pronounced flavors. 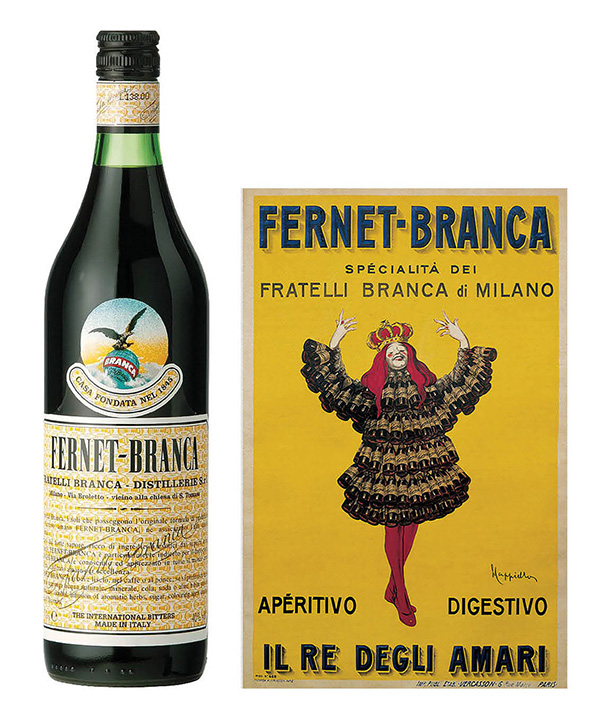 It surprises many to discover that fernet is a category of amari and that there are many producers of this herb-based libation including Cinzano, Luxardo, Stock, and Martini & Rossi, among others. It is Fernet-Branca that is most widespread and has gained an international following, especially among bartenders.

Long regarded as a restorative with intriguing aromas, Fernet-Branca was first produced by Bernardino Franca in Milan in 1845 as a digestive palliative. This complex amaro is produced from a still-secretly kept recipe of 27 flowers, herbs, roots and spices, of which myrrh, rhubarb, saffron, chamomile and gentian are primary components. Its popularity in South America led to a second distillery in Argentina, though the U.S. source is from the original distillery in Milan. The emergence of our cocktail renaissance has resulted in its use in variations of vintage cocktails including the Rye-based Toronto, the Bourbon-based riff on a Manhattan called the Fanciulli, and the sweet Gin-based Hanky Panky. 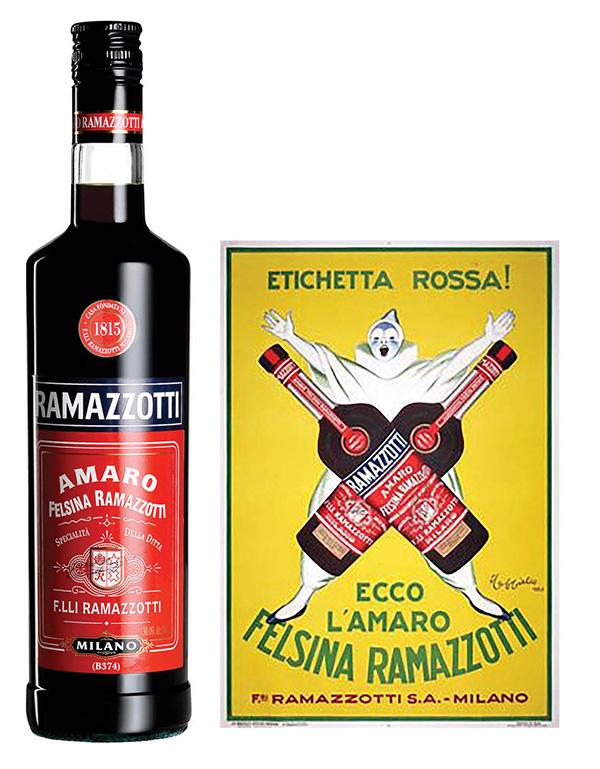 Named for its creator, Ausano Ramazzotti, it is Italy’s first amaro liqueur, invented in 1815 in Milan. While it, too, is a secret recipe of 33 botanicals, there are notes of sweet oranges, star anise, cardamom and cinnamon, almost giving one a sense of cocoa. It is dark brown and opaque and is intense at 60 proof, so needs a deft touch when mixed in cocktails. 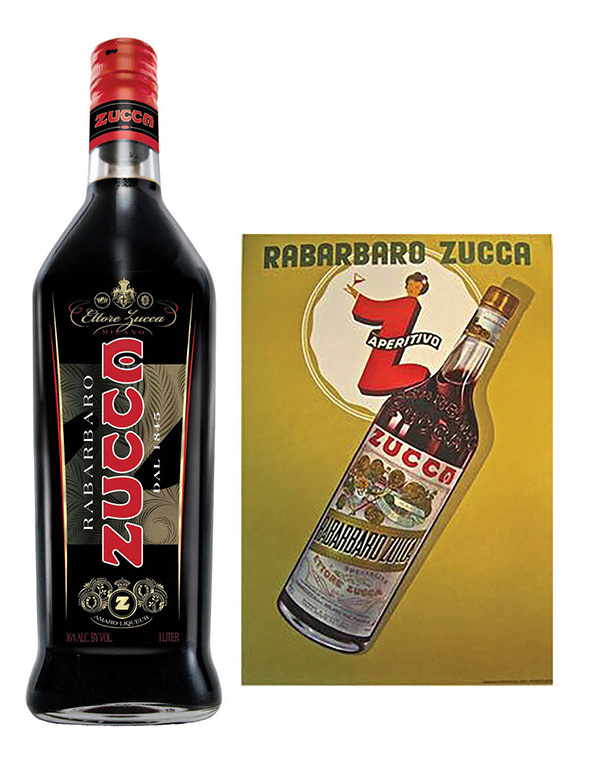 Zucca was created in Milan in 1845 by Ettore Zucca. It has long been used in the more sophisticated cafes and bars in Milan, and gained notoriety when it was designated a supplier to the Royal House of Vittorio Emmanuel. It is a rhubarb-based amaro with herbs and spices. It can be served as an aperitivo because of its lighter alcohol and more intense bitterness, but blends well with Tequila and Gin-based cocktails.

The most notable French amer that is no longer available is Amer Picon. The Amer Picon lends its name to the Picon Punch and the Brooklyn Cocktail. Invented by a Frenchman in 1837 named Gaétan Picon, it was originally a high proof (78%) amer that saw its proof being dropped over the years to 36 proof. Its flavors were derived from infusion of botanicals, primarily dried orange peels, gentian root, quinquina, sugar and caramel. There are a couple of facsimiles including famed bartender Jamie Boudreau’s easy-to-make recipe, or Torani Amer. 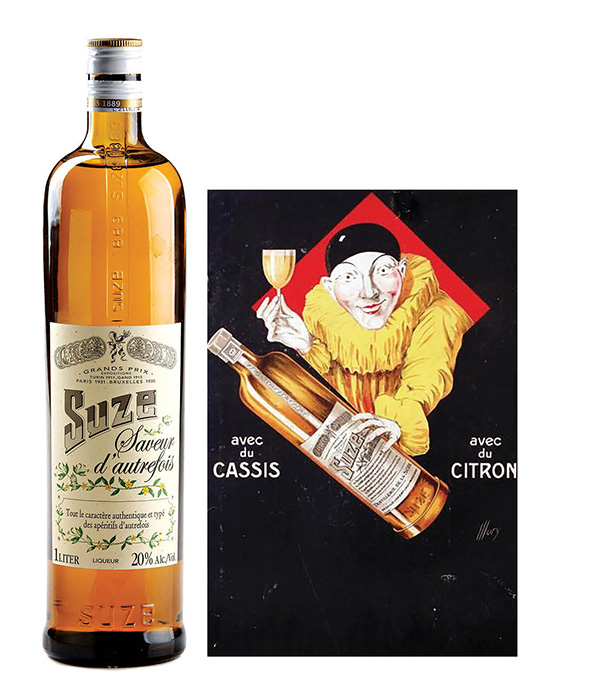 Arguably and based on my logic, one could include in the amaro category such well-known liqueurs as Bénédictine, Chartreuse and the obscure Suze, which is now available in the U.S. I will briefly conclude with the latter due to space limitations, as Bénédictine and Chartreuse demand a section unto themselves, given their long history. Suze was born of Fernand Moreau’s recipe in 1885 but was perfected in 1889 at a time when wine-based bitters were more ascendant. It is made primarily from gentian, with the addition of other Alpine herbs and flowers, and has a 15% ABV. It is floral, citrusy and earthy at the same time, with a bitter backbone offset by very mild sweetness. It can be served as an apéritif, a digestif or as an intriguing component in a cocktail.

So, do you want your bar to provide consumers with interesting “new” experiences by enhancing your cocktail programs and bars? There is a treasure trove of ingredients making their way to our shores and you need only select one or two to differentiate your bar from the competition, stimulate your bartender’s imagination and create a buzz at your bar by incorporating them into your programs. Salute! 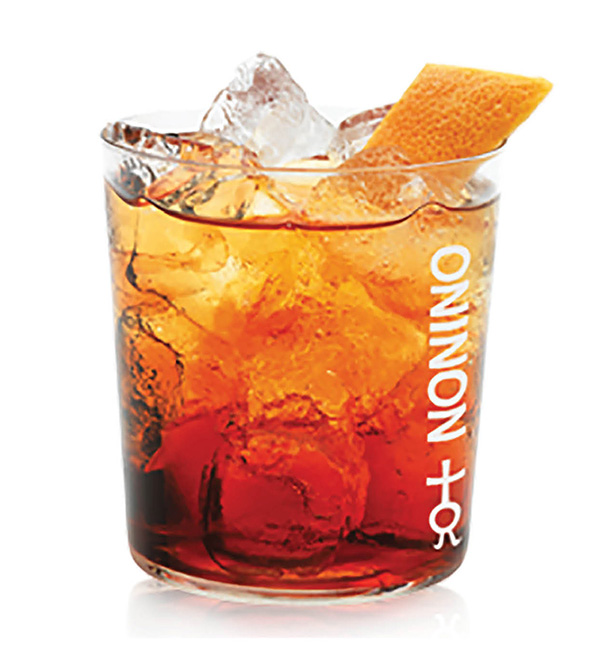 Fill an old-fashion glass with ice cubes. Pour in Amaro Nonino Quintessentia®, Campari, Berry Bros. & Rudd No. 3 Dry London Gin, Carpano Antica Formula Vermouth and then mix them all with a small stirrer.