A Special Place, Rich in History and Quintessentially Chicago 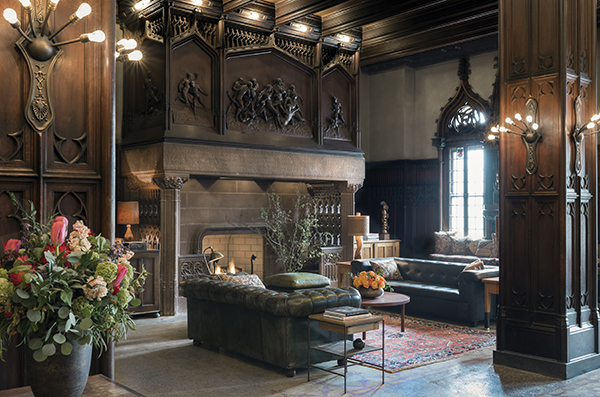 The fireplace in the Drawing Room. 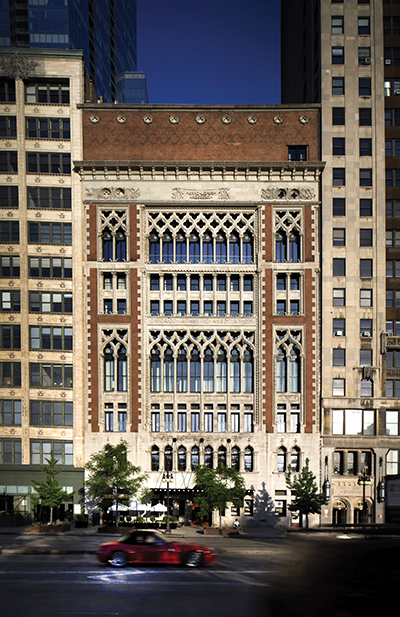 The exterior of the Chicago Athletic Association Hotel. Photos by Thomas Hart Shelby

This 1890s-era Venetian Gothic landmark has reemerged as an incomparable historic downtown Chicago hotel, with 241 rooms. Designed by Henry Ives Cobb and completed in 1893, the building operated as an elite private men’s club until 2007. Past members included five-time Olympic gold medalist Johnny Weissmuller, the original Tarzan. 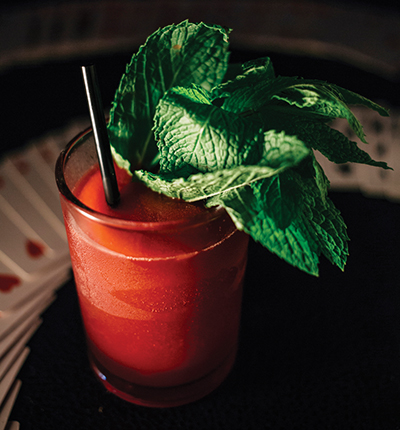 A frozen drink from the Game Room. Photo by Clayton Hauck.

The historic building was saved in 2012 when Commune Hotels & Resorts, AJ Capital and Agman Partners announced their intention to purchase it and transform the former men’s club into a hotel. Some of the best components of the space are the vintage elements saved from the original club, which the owners have preserved so well even while modernizing the building. 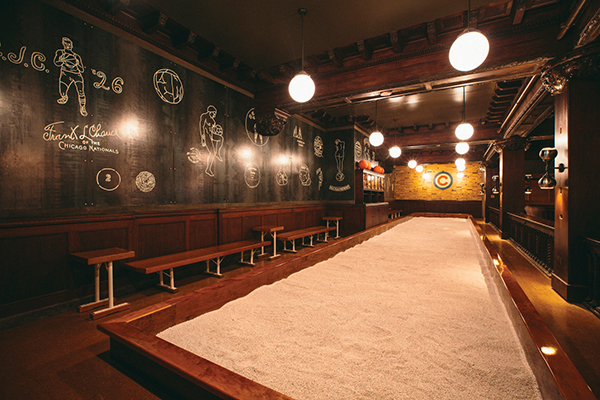 The indoor bocce court in the Game Room. Photos by Clayton Hauck 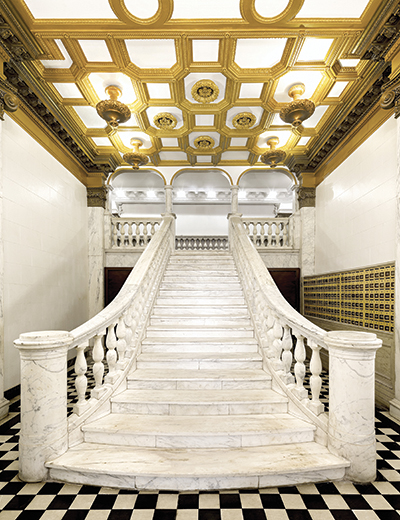 The hotel’s food and beverage scene is as diverse as the hotel itself. One of the more historic outlets is a second floor bar (the second floor is essentially the lobby), named the Milk Room. The tiny bar hidden behind stained-glass sliding doors was once a speakeasy during Prohibition. It is said they poured milk in the glasses, and then, if desired, the bartender added Whiskey to it – a clever disguise. Rare and vintage selections are the theme here, for the cocktail aficionado to savor.

On the same floor, you can discover the Game Room. Well-priced cocktails and beer, along with an interesting mix of finger-friendly foods, create the scene here. Executive Chef Pete Coenen has created a menu of fun, playful items that give a nod to concession classics and street food favorites including smoked chicken wings, wild boar sausage sandwiches, fried pickle pops, fish tacos, hush puppies and more. They are perfect accompaniments for playing pool, tabletop shuffleboard, foosball, chess or a challenging game of full-size bocce. 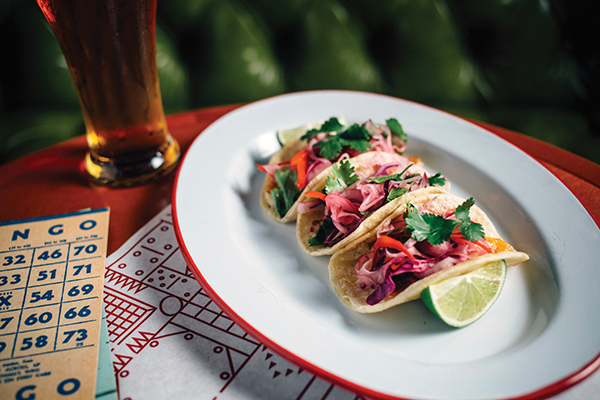 Fish tacos from the Game Room. Photo by Clayton Hauck.

Also in the back of the second floor, is the Cherry Circle Room. It is the reinvention of the iconic restaurant of the same name that serviced the Chicago Athletic Association and its members for generations. The intimate space has been fully reimagined and restoredby Land and Sea Dept., melding the building’s historic original features with modern design elements. Beverage Director Paul McGee designed a cocktail program with an emphasis on American and Scotch Whiskey. They feature both seasonal house cocktails and a menu of specialty drinks inspired by a specific iconic bartender or cocktail book – the first of which is Jacques Straub’s Drinks, written right there in Chicago in 1914. The cocktail program also features tableside drink service that offers preparations of Manhattans, martinis, and old-fashions, as well as an after-dinner amaro and cheese cart. 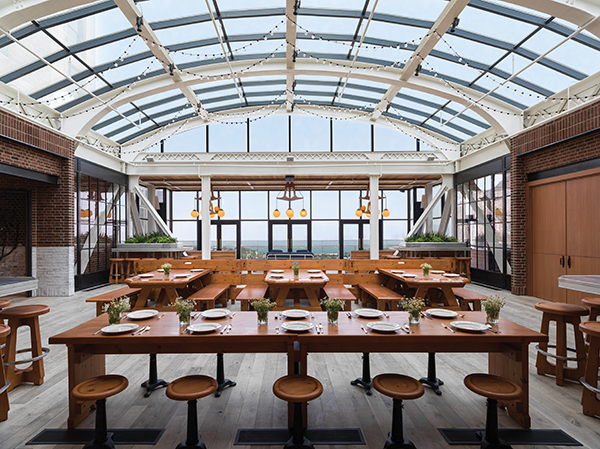 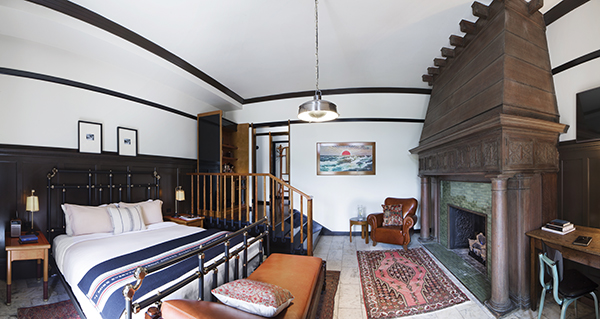 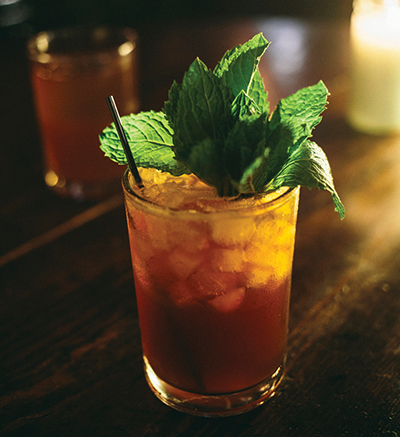 A highball from the Game Room. Photo by Clayton Hauck

Then there’s Cindy’s, the rooftop restaurant that is the crown jewel of the hotel. Cindy’s boasts an amazing selection of specialty cocktails along with a well thought-out wine and beer list. With seasonal freshness reflected in both food and drink, the rooftop offers the relaxed ambience of a Great Lakes beach house with a view of Millennium Park, the Art Institute and Lake Michigan. Cindy’s Executive Chef, Christian Ragano, wanted to offer a unique menu including platters, yummy salads, seafood, pheasant and an array of other meats and accompaniments. Starting at 11:00 p.m., Cindy’s breaks out the late-night menu, featuring a mouthwatering selection of unique bites to satiate your evening cravings.

Well worth a visit for food and drinks for the locals, or for a stay by visitors in the classically appointed hotel rooms, the Chicago Athletic Association hotel is a unique and memorable destination. 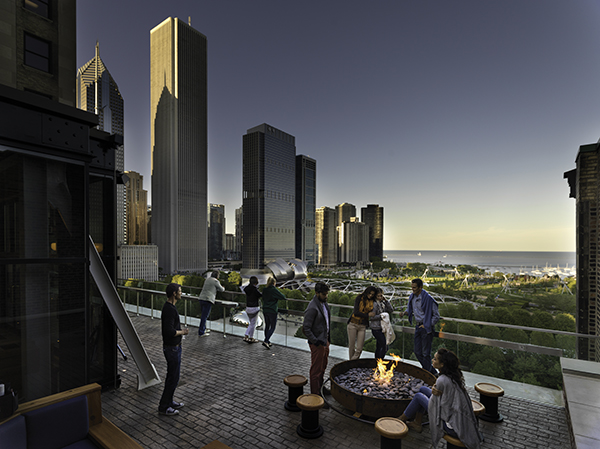