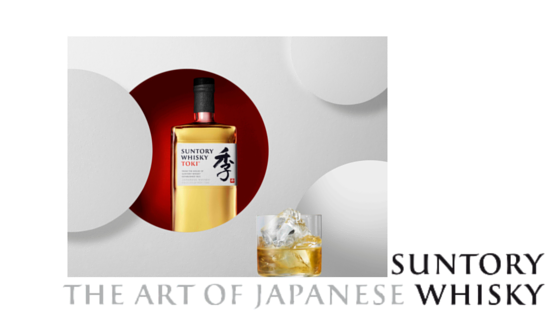 Deerfield, IL June 8, 2016 – Japan is a land of contrasts and paradox: its culture holds a deep reverence for ancestry and heritage, but also a fascination with the future; and its people respect tradition, but they constantly reinvent and reinterpret the world around them. The House of Suntory, the founding house of Japanese Whisky, is proud to introduce a whisky that extends that thread forward: Suntory Whisky Toki™. Respectful of heritage, inspired by reinvention, Suntory Whisky Toki expresses both what is authentic and what is next.

Suntory Whisky Toki, which launches exclusively in the U.S. this month and in Canada in July at a suggested retail price of $39.99, is a blend of carefully selected whiskies from the House of Suntory’s globally acclaimed Hakushu Distillery, Yamazaki Distillery and Chita Distillery. Traditionally crafted according to Suntory’s Art of Blending philosophy,the expression features the quintessential characteristics of a Suntory blend: exquisite balance, harmony and oneness.

A VIVID BLEND, TIMELESSLY MADE

While Suntory Whisky Toki respects tradition, it also challenges whisky convention by rethinking the hierarchy of its components. Suntory blends often use Yamazaki malts as their key component. Inspired by the spirits of innovation, the House of Suntory’s fourth Chief Blender Shinji Fukuyo took a fresh approach with Suntory Whisky Toki, selecting the singular Hakushu American white oak cask malt whisky — with its unique freshness, mellowness and spectacular green apple notes — as one of the blend’s two pillars. To complement that selection, Fukuyo chose Chita heavy-type grain whisky as the blend’s second pillar, adding a clean taste with notes of sweetness and vanilla.

By pairing these seemingly dissimilar but deeply accordant whiskies, Fukuyo’s insight overturned the old relationship between malt and grain and created a blend that is both groundbreaking and timeless.

WITH A SIGNATURE BALANCE OF MALT AND GRAIN

Traditionally in Suntory blends, grain whiskies have played merelya supporting role, acting as a broth or dashi to accentuate key malts. But the unrivalled sophistication and wide range of grain whiskies produced at Suntory’s Chita distillery led Shinji Fukuyo to rethink that role. He saw these whiskies, with their exquisite balance of complexity, subtlety and refinement, not as a scaffold for the heroic malt to ascend but as true heroes in their own right.

The smoothness of Suntory Whisky Toki allows for exceptional versatility — the expression can be enjoyed neat, on the rocks, as a highball or mixed as a cocktail. The Suntory Whisky Toki highball is recommended for those interested in experiencing how whisky is enjoyed in Japan today.

The highball is an artful blend of whisky and sparkling water over a generous serving of ice. In the 1950s, the highball was a favorite of whisky drinkers in Japan. The Japanese praised this simple, stylish cocktail as a refreshing way to drink whisky. They also loved how well it paired with Japanese cuisine. Since then, Suntory has played an important role in reestablishing the highball as a popular cocktail for a new generation of whisky drinkers.

To make the Toki highball in the proper Japanese serving ceremony, fill a tall glass to the brim with ice. Add one measure of whisky. Stir to cool the whisky and glass. Again add ice to the brim. Pour three measures of chilled sparkling water along the side of the glass to avoid melting the ice or bursting the bubbles. Add a twist of lemon. Enjoy.

Finish: subtly sweet and spicy finish with a hint of vanilla oak, white pepper and ginger

Since 1923, as the pioneer of Japanese whisky, Suntory Whisky has been renowned for its House of Master Blenders and for their Art of Blending. The founding father of Japanese whisky, Shinjiro Torii, built Japan’s first malt whisky distillery in Yamazaki, near Kyoto—a region known for the purity of its water, where the traditional Japanese tea ceremony was born. Torii dreamt of creating an authentically Japanese whisky by choosing a terrain and climate completely different to that of Scotland, thereby cultivating unique conditions for maturation.

In 1972, Torii’s son Keizo Saji, Suntory’s second master blender, built the Chita grain distillery near Nagoya to produce more of their own high quality grain whiskies. In 1973, Saji founded the Hakushu distillery amidst the deep forests of Mt. Kaikomagatake in the Japanese Southern Alps. Its high altitude and lush environment is what differentiates Hakushu from other distilleries.

With three distilleries and a great diversity in whisky making (different still shapes, five types of cask, and three varieties of wood), Suntory produces over 100 malt and grain whiskies which amounts to the whole of Scotland’s production.

With respect to heritage and a commitment to innovation, third generation master Blender Shingo Torii, and grandson of Shinjiro, now leads this most highly awarded House of Japanese Whisky. Today the House of Suntory Whisky has been named four-time Distiller of the Year at the International Spirits Challenge in London, UK (2010, 2012, 2013, 2014).

Beam Suntory was created in 2014 by combining the world leader in bourbon and the pioneer in Japanese whisky to form a new company with a deep heritage, passion for quality, innovative spirit and commitment to Growing for Good. Headquartered in Deerfield, Illinois, Beam Suntory is a subsidiary of Suntory Holdings Limited of Japan. For more information on Beam Suntory, its brands, and its commitment to social responsibility, please visit www.beamsuntory.com and www.drinksmart.com.

All trademarks are the property of their respective owner.