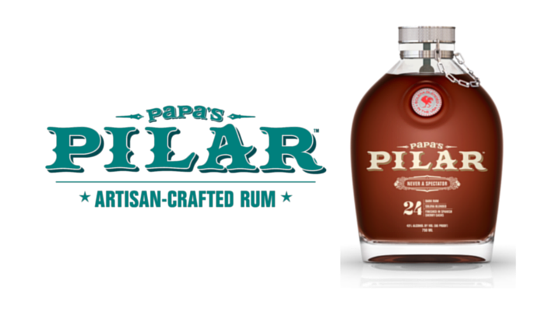 Key West, Florida June 6, 2016 – Papa’s Pilar®, the award-winning, premium sipping rum inspired by Ernest Hemingway, will release 2,300 cases of custom barrel aged dark rum in time for Papa’s Day (aka Father’s Day) in select markets. The team of Master Blenders created two special edition expressions of custom barreled Papa’s Pilar Dark, which, after solera aging in American oak bourbon barrels, port wine casks, and Spanish Sherry Casks, were further aged in bourbon barrels for an additional 90 or 120 days, respectively. Upon introducing the barrel program, the “Account Distiller” can select to custom barrel age Papa’s Pilar Rum for an appointed set of days, while receiving notoriety in the account for their craftsmanship. A custom side label with account logo and barrel number will adorn every bottle.
Papa’s Pilar Dark is a bold and complex sipping rum, which is both pot and column distilled and boasts hand-selected rums up to 24 years old, and a long, velvety finish. At 86 proof, it is comprised of rums that are hand-selected from ports-of-call in the Caribbean, Central America and the U.S.A. for their age, character and maturity. The expression was named “Best Rum in America” by the Caribbean Journal in 2014 and won a “Double Gold” Medal at the 2013 San Francisco World Spirits Competition.

“In our quest to get rum back to its roots, we further aged Papa’s Pilar Dark rum in bourbon oak, which adds a spicy finish on the back of the palate,” said Ron Call, Head of Rum Production. “The flavor is magnitudes more complex and the longer we age, the more the sweetness drops. Each sip reveals a new discovery.”

In addition to the two new expressions, Papa’s Pilar will host a picture contest on its Facebook page for Papa’s Day, with three chances to win, beginning on June 4. Participants are asked to submit a photo of their Papa’s Pilar Custom Barrel bottle. Entries must include the hashtag #PapasDay.

No purchase necessary to enter or win. Participation is limited to legal residents of the continental U.S. and must be 21 years of age.

Papa’s Pilar is meant to rekindle a sense of adventure in us all. “Papa” as Ernest Hemingway was known, lived an epic life full of perpetual motion, and Papa’s Pilar was crafted to accompany rum enthusiasts as they sink their teeth into life. Named for his muse and one true constant, Pilar is the vessel that allowed America’s literary giant to reach beyond the shoreline, feast on life and remind us to never be a spectator.

Papa’s Pilar custom aged barrel rums are available in 750ml bottles in both on- and off-premise accounts in California, Florida, Georgia, Illinois, Indiana, Kentucky, Louisiana, Massachusetts, Michigan, Minnesota, Nevada, New Hampshire, Rhode Island, Tennessee, and Texas. The suggested retail price for both the 90 and 120-day product is $39.99. Prices may vary by market.

Papa’s Pilar was developed in conjunction with Ernest Hemingway’s estate. The Hemingway family donates 100 percent of their royalty profits from Papa’s Pilar Rum to charity. The brand is the “official rum” of the Coastal Conservation Association of Florida, partner of the International Game Fish Association, and works with local charitable foundations and causes dear to Hemingway and his heirs.

Every aspect of Papa’s Pilar is thoughtful and purposeful. The distinct bottle evokes Papa’s exploits through a form factor reminiscent of an iconic WWII canteen. The etched compass closure reflects that same sense of adventure on either land or sea. The lion heads represent nobility while the Rooster on the Medallion pays homage to Key West, where Hemingway and his boat Pilar once resided and remain celebrated fixtures within the community.

Hemingway Rum Company, LLC is a distilled spirits company based in Florida that’s dedicated to producing super-premium multi-sourced solera blended artisanal rums. The Company’s inaugural offerings are Papa’s Pilar® Dark and Blonde rums, incepted and crafted by a seasoned team of best-in-class partners. The Company encourages consumers of legal drinking age to Live Courageously and Drink Responsibly and proudly supports local organizations that serve Ernest Hemingway’s adventurous, literary and conservational legacy. Papa’s Pilar plans to break ground on a new distillery and experience center in 2016 in Key West, Florida, further honoring Hemingway’s contribution to the classic spirit of the city in which he once lived. Papa’s Pilar® is a proud member of the Distilled Spirits Council of the United States (DISCUS).