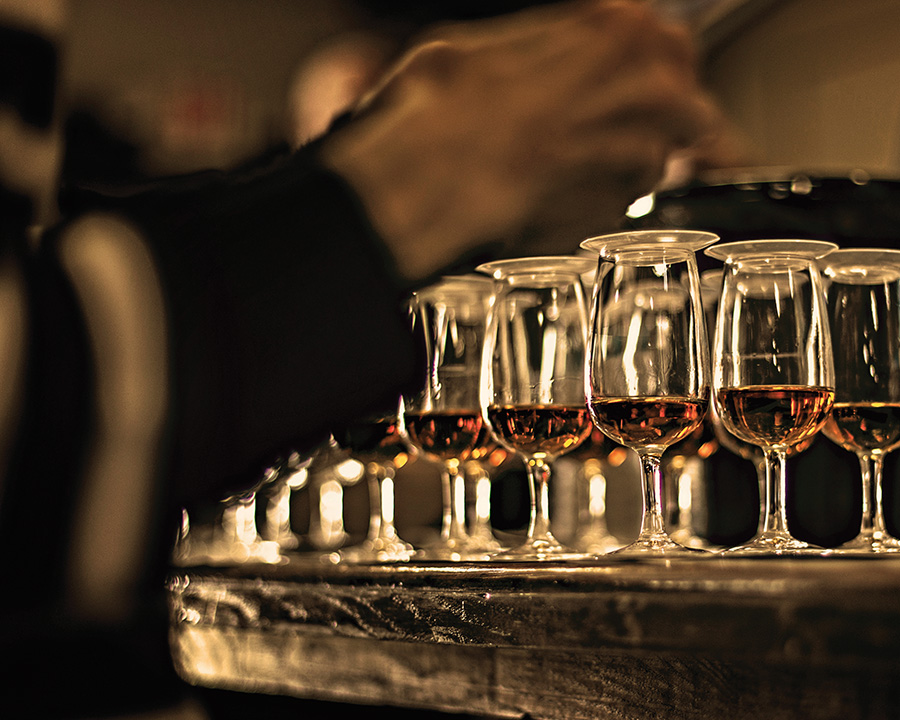 June 22, 2016   |   By By Edward M. Korry, CHE CSS CWE,
Department Chairman at Johnson & Wales University,
and President of the Society of Wine Educators 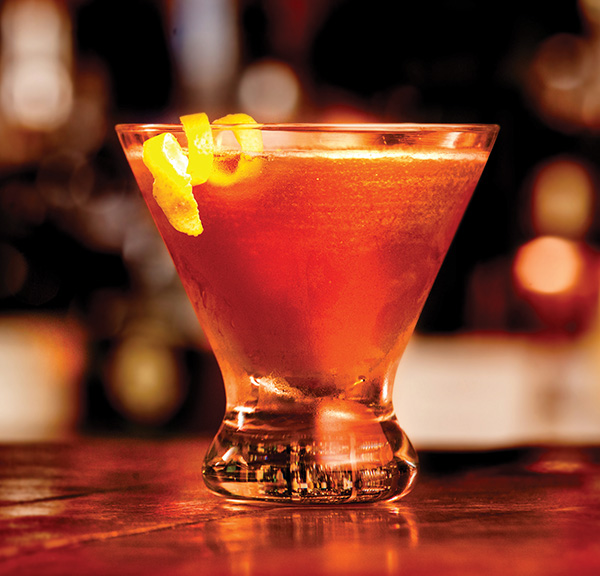 We are undergoing a Bourbon renaissance, the likes of which we haven’t seen in decades. This was brought even more vividly to light when I attended the Society of Wine Educators (SWE) mini-conference that was held in Louisville this past April. With excellent seminars and instructive visits to distilleries, one could gain firsthand appreciation for what is transpiring. It wasn’t my first visit to this city, but I found a palpable sense of excitement and energy present everywhere I turned, from speaking to professionals and seeing the renovation of downtown Louisville, to spotting new distilleries. The other marked difference from my last visit eight years ago is not only the growth in craft distilleries in Kentucky but also that The Bourbon Trail has developed so quickly, to augment the growing public interest in both traditional distilleries and craft distilleries. Craft distilleries are defined as producing under 100 barrels. And I also learned that craft distillers aren’t viewed with enmity by the large distillers, but are mentored and helped with both standards and navigating the complex regulatory system.

Overall, Bourbon production has increased 170 percent since 1999, with the rise from 455,078 barrels to 1.3 million barrels in 2014 being the highest since 1970. Super-premium Bourbons have increased by 124 percent. Export sales exceeded $1 billion last year.

Why this spectacular growth? 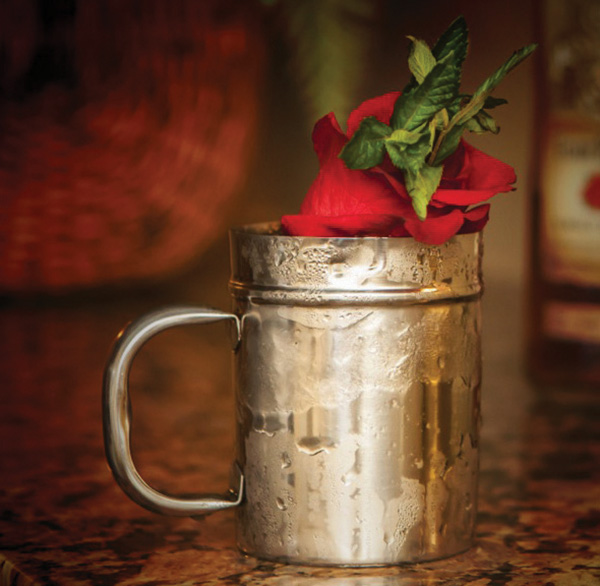 roducts and trends are cyclical by nature. Brown spirits, including Bourbon, dominated the U.S. market until the ‘70s when their decline reflected the rise of Vodka. Younger consumers don’t remember the days when Vodka was viewed as countercultural, with the perception of it being “cool.” It was associated with détente and the new importation of Stolichnaya from the Soviet Union. It was also a time when consuming those paradigms of industrialized and manufactured food and beverage, be it TV dinners or Tang, seemingly reflected all that was good about modern society. Drinks that included sodas and juices from the soda gun, for speed and convenience, ruled the bar practices of those days. Vodka was the perfect base for such fruit-based sweet drinks. It wasn’t a spirit to contemplate and sip, like Bourbon. Bourbon has an authenticity and American quality that speaks to its fans. 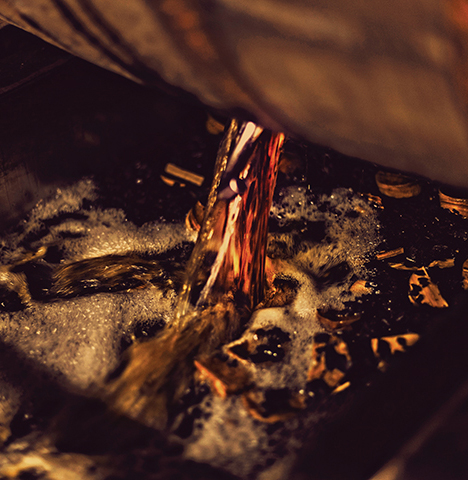 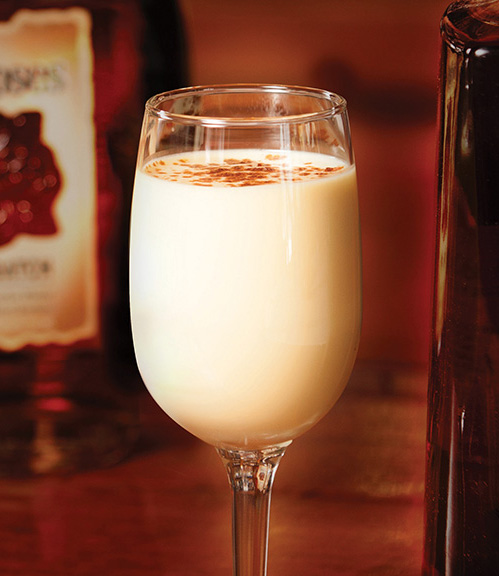 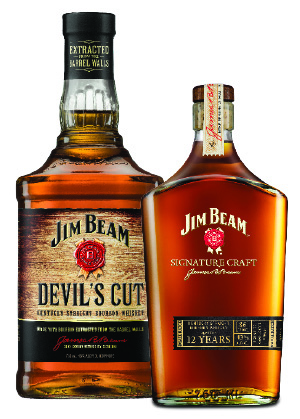 Jim Beam was the first distillery we visited, though I had the fond memories of a private tour on a previous visit that included a private guided tasting with Fred Noe, the President of Jim Beam. Jim Beam produces 13 million gallons at three different distilleries and it has one of the widest arrays of blended Whiskeys and Bourbons. The American Stillhouse, which has been added since my previous visit, provides tours with an intimate and comprehensive scale of what transpires at the larger distilleries. All tours end with a tasting. I will include some of my favorites, not limited to the tour visit because tourists are limited to two tastes.

Jim Beam Kentucky Straight Bourbon Whiskey is a great value for any bar, having a soft red-fruit component with aromas of fresh corn and sweet toasted oak spice.

For not much more cost, considering its minimum eight years of aging, Jim Beam Black Bourbon offers a beautifully soft caramel expression, which lingers with its warmth.

Another favorite of mine is Rye, which is especially good in Manhattans and old fashioneds. It has a nice bite and edgier acidity that help the spirit shine through in cocktails. 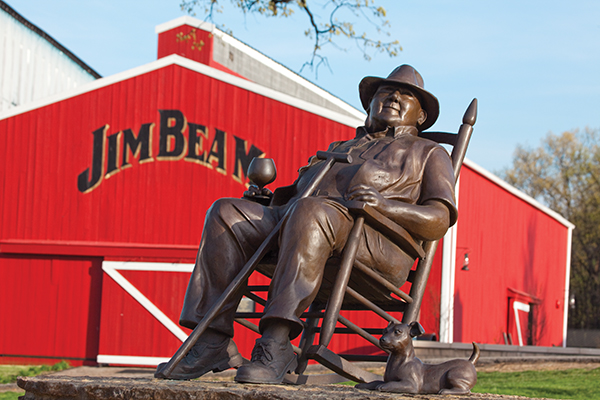 The Jim Beam Pre-Prohibition Rye was a new iteration of Rye Whiskey for me. It is a little softer and sweeter than I had expected, with a long nutty, caramel quality, but still finishes dry.

For the full Rye effect, and one that I would sip neat on a cool autumn night, is the Knob Creek Rye. It is an amazing Rye with the full rye grain, spicy aromas and taste but with a smoothness that belies its 100 proof.

The Jim Beam Signature Craft Quarter Cask Finished Bourbon is also part of the Jim Beam premium series, along with their Single Barrel program. There is a more defined oaky toastiness with coconut and caramel but, given the added five years of aging in smaller barrels, it is still surprisingly soft and round with a smooth dry finish.

I have always been a fan of the many small batches such as Basil Hayden’s, Booker’s or Knob Creek, but a fair review of Jim Beam’s small batch programs requires another article.

In contrast, the tour at Four Roses, with its distinctive Spanish Mission architecture and much smaller scale, was almost intimate. Its twenty rackhouses or warehouses are located 70 miles away and are very unique and non-traditional because they are single-floored with 15 sets of  barrels stacked six high and wide. So the impact of the floor level doesn’t apply, which is the point in that there is consistent aging or maturation. Like its larger brother, Jim Beam, it is Japanese owned (purchased in 2002 by Kirin Brewery), resulting in focused efforts for continuous improvements. Most Americans who remember Four Roses in the 1970s will not be aware that all its premium Whiskey was sold in Japan at that time. Four Roses had been the number one Bourbon in the 1940s until Seagram’s purchase in the 1960s. They re-introduced the Yellow Label in 2003, the Single Barrel program in 2004 and small batch in 2006. 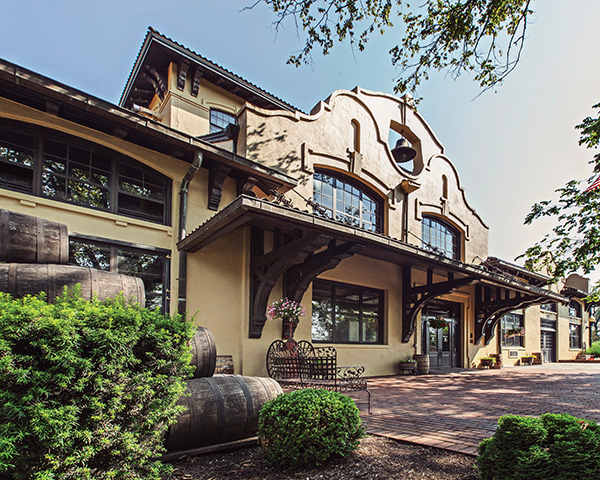 Four Roses’ focus on quality has successfully allowed it to reestablish its reputation in the U.S. I learned from an excellent tour guide that they source non-GMO corn from Indiana, rye from Denmark and Germany, and barley from Montana and Wyoming. There was an emphasis on the role of yeasts, and we were informed that there are basically two mash bills: the sweeter, with 75 percent corn, 20 percent rye and 5 percent malted barley; and the second having 60 percent corn, 35 percent rye and 5 percent malted barley. There’s nothing like walking between large cypress wood fermenters with their cooling coils, and smelling the sour, yeasty and ester aromas wafting from the bubbling mash. We tasted the following Bourbon Whiskeys, all of which were delicious in their own way:

The Four Roses Yellow Label, at 80 proof and aged 6 to 6½ years, was fruity with apple, pear and honey notes, and was light on the palate with a surprisingly smooth finish. 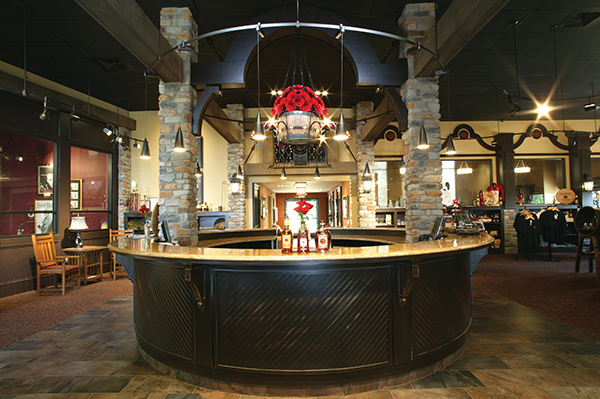 The Four Roses Small Batch Kentucky Straight Bourbon, at 90 proof and aged 7 to 7 ½ years, was spicy with more butterscotch and caramel notes. It was rounder on the palate with a smooth oak finish, and struck me as not only being a good sipping Bourbon but also great in some classic cocktails, such as the old fashioned.

The Single Barrel Kentucky Straight Bourbon, made from the second of the two mash bills, at 100 proof is aged 9 to 9 ½ years, and had deeper fruit notes such as plums and black cherries, with a slightly spicier component. It had a long, smooth maple and cinnamon finish.

Bourbon has a long history in the U.S. In 1964, Bourbon was declared by Congress as a “distinctive product of the United States” in order to give the name legal international protection. It subsequently passed a resolution offered by Kentucky’s Senator Bunning in 2007, declaring September to be Bourbon Heritage Month and further citing that Bourbon was “America’s Native Spirit.” 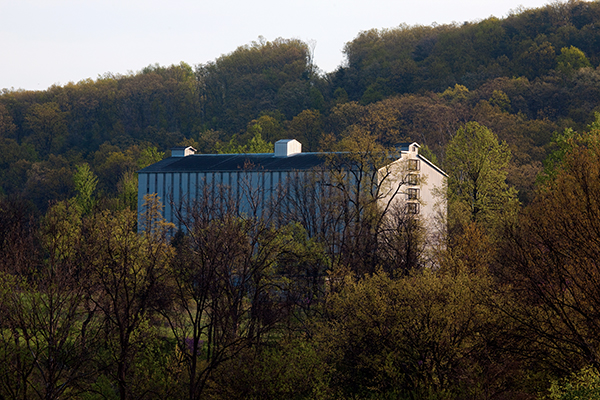 Many historians and authors dispute the origin of Bourbon Whiskey’s name. It may reference Bourbon Street in New Orleans, where it was sold as it travelled from Kentucky down the Ohio River to the Mississippi River, or it may well have been a way to differentiate the Whiskey sold as having come from Bourbon County, unlike other spirits such as Cognac.

Early English, Scottish and Irish settlers who pushed farther west in the late 18th century held traditions of making Whiskeys that were malt- and rye-based. Rye grew easily in New York and Pennsylvania and Whiskeys were based on those ingredients. But it was corn that grew exceedingly well in the rolling hills of Bourbon County, Kentucky, named after the French royal house. Another key factor to successful distillation in this county was the pure quality of the limestone-filtered water, with its iron-free content. Soon, Whiskeys displaced the slave trade-based Rum as the American spirit. Whiskey also provided the tax resources for our early debt-ridden nation. The excise tax placed on distilled spirits resulted in the Whiskey Rebellion, which needed federal troops to suppress. And let’s not forget that beverage alcohol was the main source of federal tax revenues until Prohibition. 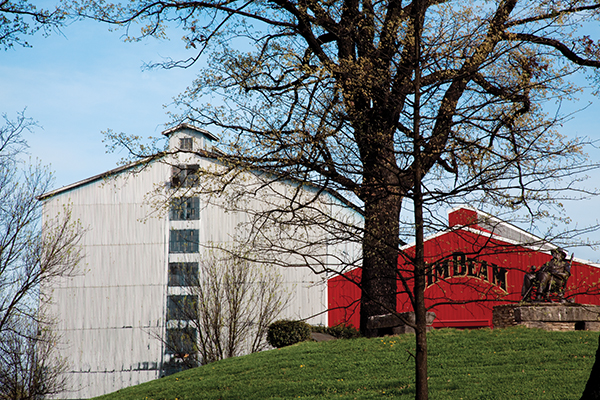 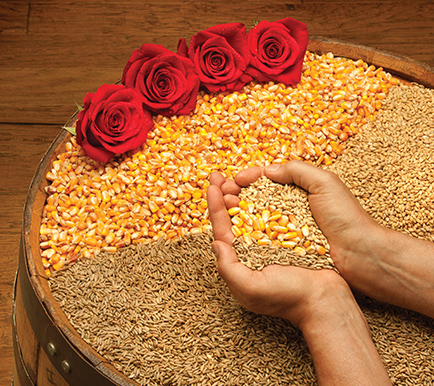 The base corn can vary from 51 percent and may be as high as 70 percent or more. The grain recipe, known as the mash bill, may include rye, wheat or malted barley. Sour mashing, a process distinctive to Bourbon making, is the inclusion of the previous distillate’s backset or residue of spent grains. The backset maintains a consistent pH to offset the high alkaline water, so that yeast perform in a similar manner from batch to batch while discouraging bacteria at the lower pH. 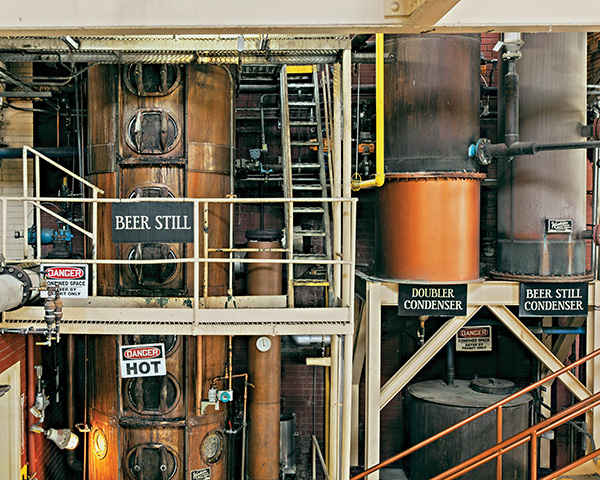 Aging takes place in new American oak charred barrels, making Bourbon Whiskey unique. The complex flavor-producing process – in which color, taste and flavors emanate from the barrels – occurs in traditional rackhouses (also known as rickhouses), where the natural changes of temperature may be allowed to occur from summer to winter, or heat cycling may be employed. The rackhouse may hold over 20,000 barrels. The aging process for barrels on the 11th and 12th floors, where temperatures may reach 130 degrees Fahrenheit, may take six to seven years, while barrels on the bottom two floors may take 11 to 13 years. (Single barrels, also known as “honey barrels,” are selected from the sweet spots in the rickhouse, usually on the seventh through ninth floors.) Small batch Bourbons such as Booker’s or Basil Hayden’s, may comprise as many as 150 barrels, while the normal blend may incorporate over 500 barrels from the different floors. 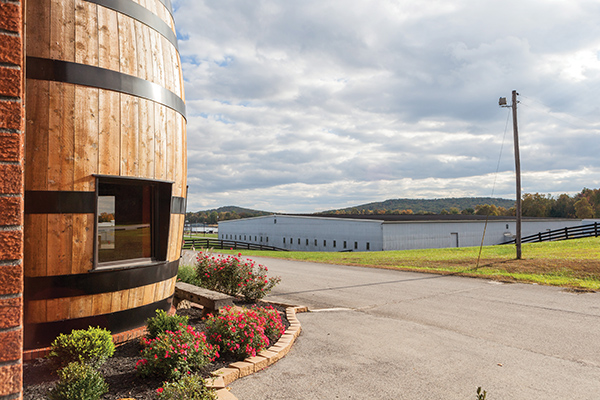 The “Angels’ Share” may represent as much as 5 or 6 percent annual evaporation from the top floors, while the bottom floor may be 1 percent.

The one takeaway from this tour and mini-conference is that there is always so much more to learn and so many styles that are represented by large and small producers alike. The bigger houses, such as Jim Beam and Four Roses, have the resources to experiment and test multiple products and do an exceedingly good job at bringing new Whiskeys onto the market that may well be revivals of traditional recipes. There is something for everyone – whether neat or in a cocktail, from a classic Manhattan to a julep, boulevardier or bombino.