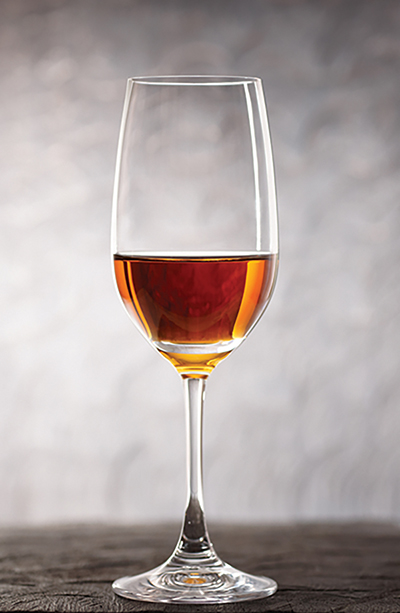 “Fortified wines seem to be working at other establishments – it kind of goes along with the trendiness of craft beer,” one operator told us, in our Spring TIPS research report. “Everyone is doing it and everyone loves it.” Like craft beer, fortified wines or wines to which a spirit has been added (typically brandy), have also seen quite the uptick in recent years, with publications such as The Wall Street Journal and Eater reporting on the resurgence and comeback of fortified wines like vermouth, port and sherry. The Wall Street Journal specifically calls out port, saying the wine has “found a second wind as a cocktail ingredient,” and that bartenders are “discovering that it offers many of the same characteristics that make vermouth and sherry so attractive for mixing, along with enough natural sweetness to replace the simple syrup commonly used in cocktails.”

What exactly is fortified wine?

Some fortified wines, such as vermouth, have long been used as a key ingredient in cocktail staples like martinis and Negronis, but the recent resurgence is also driving interest in antique fortified wines like sherry, served straight or in a cocktail. Fortified wines are split into several categories and subcategories with varying characteristics. Vermouth is actually an aromatized wine that can be sweet or dry, while sherry (which has its own subset of several varieties) is defined by the location where grapes were produced, in this case, in an area known as the “sherry triangle” in southern Spain. Other fortified wines are similarly named after their production center. Port, a rich, sweet wine fortified with unaged brandy, hails from Duoro Valley, Portugal; Madeira is from Portugal’s Madeira Islands; and Marsala is from the city of the same name on the island of Sicily, Italy. Because these wines are fortified with the addition of other spirits, they tend to be higher in alcohol content than traditional wines, with an average of between 15% and 22% ABV (still well below spirits like whiskey or gin). The alcohol not only gives the wines more flavor but also helps with the wine’s stability in preventing any further fermentation.

How can fortified wines add to your beverage program?

Fortified wines are some of the fastest-growing varieties on alcoholic beverage menus today. Vermouth is up 79 percent in the past four years, sherry has increased 47 percent and Madeira has grown 31 percent. According to Datassential’s MenuTrends Keynote Report: Alcoholic Beverages, more than 40 percent of operators who offer alcohol include fortified wines such as sherry and port on the menu. Multiple operators told us they like fortified wines because they create a more well-rounded wine list, giving customers additional unique options and choices. In some cases, fortified wines have made the jump from primarily being on food menus to now starring in cocktails. For example, Marsala, known for flavoring Italian dishes like veal or chicken Marsala, has in the past four years, decreased more than 10 percent on food menus, while on beverage menus, Marsala has increased over 200 percent. And if an operation is already using wines like sherry or Marsala on food menus, why not cross-utilize ingredients and offer consumers a unique beverage option?

At Dante in New York, a traditional list of by-the-glass wines and beers is augmented with a selection of vermouths and sherries, including what they call “Vermouth Service,” a cocktail featuring on-tap Noilly Prat vermouth from France, frozen grapes, Perrier and lemon oil. Vermouths, sherries and other fortified wines/aperitifs are also interspersed throughout the beverage menu, putting a unique spin on cocktails like the Sherry Cobbler, with fino and Amontillado sherries, dry curacao, marmalade, bitters and lemon.

Single-spirit bars, like Chicago’s 300-whiskey strong Longman & Eagle and Los Angeles’ 250-bottle Cana Rum Bar, are also popping up across the country, and fortified wine aficionados are getting in on the action. In Washington, D.C., you’ll find sherry-obsessed Mockingbird Hill, which pairs Spanish small plates with a vast sherry selection. The bar’s passion for the Spanish fortified wine shows both in its website URL, drinkmoresherry.com, and in its extensive sherry list, available à la carte, in tasting flights and in cocktails. Also in D.C., you’ll find The Royal, which offers a variety of cocktails and alcohols but is known for its house-made vermouth available on tap.

With some of these new craft options, bartenders have also been using fortified wines in place of high-proof spirits, either on “low-alcohol” sections of the drink menu or at bars and restaurants with a limited liquor license. Vermouth, sherry and port are flavorful options that open up new drink possibilities beyond saketinis and white wine margaritas. At Pearl & Ash in New York, which doesn’t serve hard alcohol, you’ll find a wine list that spans nearly 100 pages, along with low-proof cocktails made from fortified wines. An example is their Spiritual Americana with blood orange juice, Lillet rose and lime juice.

Though there are opportunities for operators to expand beverage menus with low-proof cocktails and fortified wines, consumers for the most part aren’t that familiar with these concepts and even with wine in general. In Datassential’s Alcohol Keynote Report, one in four consumers said they don’t know much about wine. To mitigate the intimidation factor for consumers, operators can take the opportunity to educate and engage with consumers, whether it’s taking the time to explain different wine and flavor pairings, or offering samples or tastings (30 percent of those surveyed said samples would help lessen any uncertainties on choosing a particular beverage).

For more data on fortified wines, low-proof cocktails and many more beverage insights, contact Datassential for products like TIPS and the nearly 200-page Alcoholic Beverage Keynote Report, which includes everything from consumer perceptions of beer, wine and liquor, to flavors and innovations within the industry.

This article has been provided by Renee Lee, Senior Publications Specialist at Datassential, a leading consulting firm and supplier of trends analysis and concept testing for the food industry.