After years of crafting ‘artisanal ice’ in shapes of spheres and spears, squares are hip. 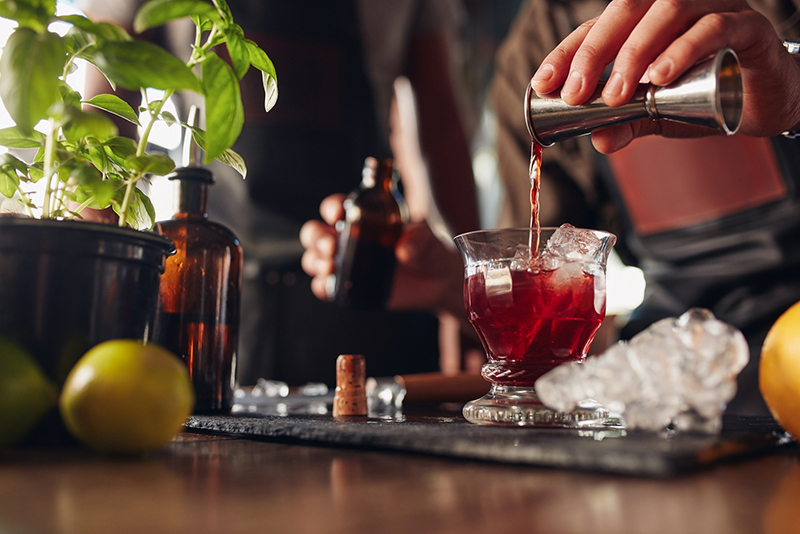 The world of high-end cocktails is being stirred by a development that would have been unthinkable in years past.

Bartenders want to put ice cubes in the drinks.

They have tried giant balls of ice, or ice in the shape of a diamond or a 5-inch spear. To the surprise of craft fans who have been loading up drinks with so-called artisanal ice, however, even restaurants that boast of having an “ice program” to go with their “cocktail program” are turning back to the traditional cube.

“Ice spheres are so seven years ago,” said Joseph Ambrose, owner of Favourite Ice Co., a hand-cut cocktail ice distributor in Washington that provides to about 30 bars in the area. “It’s the 2×2 cube that bars want most often.”

“We have drinkers who are really picky about ice,” said Drew Hairston, bar manager for Bar Charley, in Washington, D.C., which makes artisanal ice in-house. While some customers like smaller ice cubes because they melt faster, he said “we have other experienced bourbon drinkers who specifically require the cube.”

In recent years, an entire industry of artisanal-ice makers has carved out a niche, distributing to hundreds of bars in cities such as New York, Los Angeles, Chicago and Washington. Unlike ice sculptors, who create giant mermaids or entire bars from blocks of ice, these artisans focus on hand-carving a few small shapes of ice for drinks.

The business is often based on experimentation, which can have chilling effects since makers can only produce so much by hand. Ice distributors say the shift back to the plain-old cube reflects both economics-cubes are cheaper to make than other shapes-and the realization that to most drinkers, size matters. The trendy cubes are bigger than regular ones; most glasses can only accommodate one.

Like many upscale watering holes, Bar Charley only serves its cube in high-end drinks, like an $18 cocktail that involves first setting a piece of wood on fire, then placing a glass over the smoke when the fire is put out. The customer then puts the cube in the smoked glass and pours bourbon over it.

“If I was on a date, at least the giant ice cube would give us something to talk about,” said Susan McCarthy, a recent patron.

Mr. Ambrose, 38, who started his ice company four years ago, says a sphere is harder to make, which means it is more expensive. His average price per ice cube is 70 cents, or roughly $3 less than the ice sphere.

The entire artisanal-ice making process really boils down to patience and precision.

Ice makers use a special machine that purifies and freezes a 300-pound block of ice over a span of three days. Mr. Ambrose calls it the “temperamental” stage because the lengthy freezing process can sometimes cause the machine to malfunction overnight or the block can shatter if the room temperature is too warm when it is removed from the freezer.

The ice block is then cut down into cubes or spears with a chain saw or a waterproof machine with a butcher serrated saw. To make a sphere, the ice is first cut into a cube shape, then placed in an aluminum press with a hollowed-out center. From there, the cube slowly melts into the shape of a sphere.

“It’s a pain,” said Mr. Ambrose, who left his mixologist career at a high-end bar in the W Hotel in Washington to open a tiki bar called Archipelago in March as co-owner.

It is difficult for ice crafters to justify the labor cost of a sphere since many have to deliver the ice later that day, typically in coolers in the back of their own cars.

“I know this is going to sound crazy but you can form a relationship with each of those individual cubes” as they melt, said Mr. Avery, who pulled back from selling wine in January to open a craft ice company, Melt New Orleans. “You’re literally seeing the effects of the thermodynamic properties and you don’t get that in some of the other shapes in taller glasses.”

One way to know if a cube has been crafted by an artisanal ice maker versus at a bar using a mold, he said, is whether there are bubbles or fog in the ice. Specialty ice makers produce crystal-clear ice that is hardly visible when looking through the glass-something that is difficult to do by simply freezing water in a mold, he said.

Using a mold “is like somebody buying a kit car that looks like a Ferrari but it’s not a Ferrari,” Mr. Avery said.

“Personally, I don’t care about the clarity of the cube,” said Adam Walker, a structural engineer and patron at Bar Charley. “Although I did have a crystal clear cube once and it was cool because it was like putting a magnifying glass over a newspaper.”

Some restaurants, such as Bar Charley, have long made their own specialty ice in-house using molds, PVC piping and even a thermos. Having an ice program has allowed the bar to experiment with freezing cherry purée in the shape of a sphere or an edible orchid in a cube.

Not many bars can craft their own ice in-house because they lack the space and labor required, said artisanal-ice distributor Eric Alperin, a partner of Penny Pound Ice in Los Angeles. He moved from crafting ice at his own bars to starting a separate business delivering the ice to others four years ago.

Penny Pound Ice, which operates in the basement of a brewery, now distributes to more than 30 restaurants and bars.

Mr. Alperin said ice cubes are their best seller, although they altered the shape into more of a rectangle to fit the glass better. They call it: “The Rock.”

“The Rock is our bread and butter. It’s what a lot of people want,” he said.

At his tiki bar, Mr. Ambrose offers his ice in certain drinks, such as high-end rum, but not in the “flaming pineapple” drink. With more artisanal ice makers cropping up in markets that are limited, ice makers are concerned their markets could become oversaturated.

“I’ve already set the price as low as I can go and I’m barely making a profit,” he said. “If someone could find a way to mass produce this and sell it for 15 cents, it would probably kill us all.”