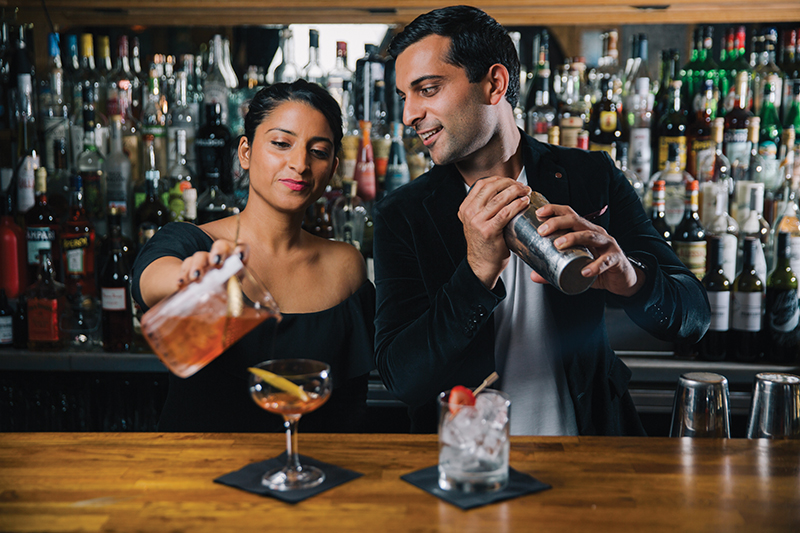 When Georgetown Marriott’s Director of Hotel Operations, Mike Wilson, signed up his hotel for Partender, he was just trying to find a system to keep over-pouring at his hotel bar in check. Two years later, with the help of Partender, Georgetown Marriott is now leading the way in which inventory, ordering, trend analysis and accounting are done for the Marriott brand. According to Wilson, “It takes us just 15 minutes to do inventory, which we do at least twice a week. We stopped running out of things; and thanks to Partender, we managed to get beverage costs down from 45 percent to 20 percent in a matter of months.”

Partender is an effective, efficient, automated advancement to taking inventory. The conception of Partender stems from the need to save time and money, and create transparency within a process that big enterprise business doesn’t have the visibility into today.

Currently, the industry counts inventory – its most valuable asset, often worth hundreds of thousands of dollars – once a month or maybe once a week, while the till is counted every shift. Unfortunately, because inventory isn’t counted as accurately and as frequently as the cash in the register, 23 percent of liquid cash disappears. One out of every four drinks – 23 percent of profits – walk out the door unaccounted for.

Thus, when inventory is 10 to 50 times more valuable than the cash register, it makes sense to count it as carefully as the till. However, due to the antiquated, painful and inaccurate pen/paper, or 10-point “guesstimation” process, this has been impossible to do. Enter Partender.

Partender’s founders, Nik and Anjali Kundra, are determined to make doing inventory as easy as using your iPhone or Android. And their approach of easy, powerful technology seems to be working. The mobile-first system is in over 15,000 venues worldwide, and it gets rid of inaccurate guessing and data entry. To do inventory and ordering in minutes, all the user does is tap on the image of the bottle to be counted, then swipes to the next bottle on the shelf. 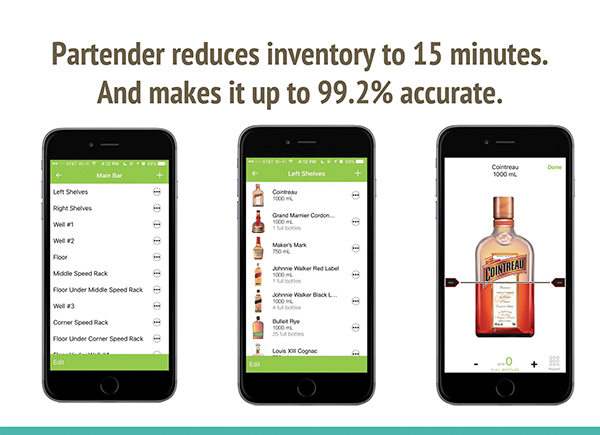 Reduces Inventory to 15 minutes with up to 99.2% accuracy.

In addition to Marriott, respected brands like Tilted Kilt, Top Golf, Mellow Mushroom, United Airlines and many more have picked up the system to make employees’ lives easier, order just the right amount (so they never run out/over-stock), streamline accounting metrics, and see trend data like never before. With the ability to see exactly what’s moving in near real time, operators and executives can build better beverage programs with suppliers and distributor partners.

Mellow Mushroom’s Spring, Texas location went from fluctuating liquor cost (all the way up to 29 percent) down to a consistent 16-18 percent. “For the first time in years, the P&L on the accounting side is actually beginning to match up with the inventory reporting/analytics side,” says Alek Relyea, the location’s former bar manager, who launched Partender at the Spring location.

“Partender helped me catch a thief! After a few months of utilizing Partender, I became suspicious of a certain bartender – the same bartender that initially introduced me to Partender – about his individual pour cost. With the help of Partender’s usage report, I was able to pinpoint specific shrinkage and catch my employee over-pouring/stealing on the spot. Our liquor cost dropped a full percentage point the week after he was fired.”

Inventory and Insights from Coast to Coast

This year, United Airlines implemented their largest and most visible change in nearly the last 20 years of operation, with a massive rebranding and remodeling of their Club Lounges. At the focal point of the update was their bar program. United needed a cocktail culture to set them apart from the growing aviation segment and immediately impact the million+ members who travel through their doors annually.

With the assistance of their operating partner, Sodexo, it was evident this heavy lift would require tools and support to update the existing efforts on many levels. “It’s such a unique environment in which products are both complementary and for sale. As you can imagine, the need to actively move process and thinking toward a more aggressive sales philosophy, required incredible visibility into 50+ locations, all in real time,” says Jayne Portnoy. Enlisted by Sodexo to implement this rollout worldwide, Portnoy sees data access, trends and site level support tools as the key benefits of Partender.

“When sales and profits aren’t your primary target, inventory management isn’t critical. But United flipped a crucial switch within their brand strategy, and Sodexo had the foresight to access the best tools possible to make the shift a success. With Partender, we have been most immediately impacted by utilizing Par Level forecasting to our benefit, speeding the inventory process and having access to live trend analysis. I look at this polling data monthly to determine promotional activity and assure each location is operating at their most efficient level. We simply could not have achieved this standard of efficacy so quickly without Partender,” said Portnoy.

Each United location has management support unique unto its environment. The ease of Partender allows for simple implementation with support staffs from 5 to 50. Each location is on-boarded with a 1-1 WebEx session, role assignments and on-going follow-up to support the most effective use of the Partender tool. “We simply could not have lifted this program into place without the above average commitment by Anjali, Nik and Tara to this partnership,” said Dave Hatcher, Vice President of Operations Sodexo. “This has been a strong partnership for all parties.”