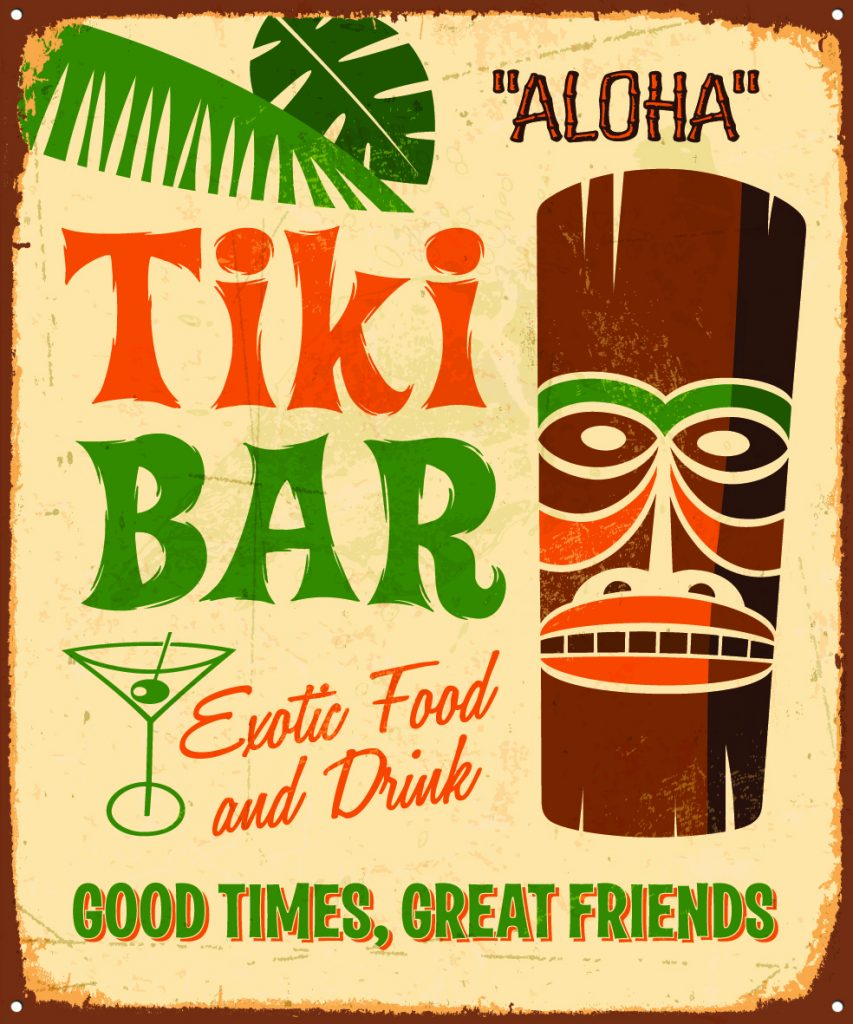 Island cocktails experience a resurgence with ingredients like ghee-washed bourbon, concepts like space-themed tiki bars, and much more. 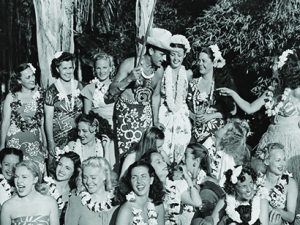 Bamboo, tiki torches and lanterns, pupu platters and rum-filled drinks galore – enter the world of the tiki bar. Tiki bars are certainly nothing new, with most sources agreeing the trend originated in the 1930s with Don the Beachcomber (real name: Ernest Raymond Beaumont-Gantt), who brought South Pacific-inspired décor and island drinks to Los Angeles when he opened his eponymous tiki bar. Then came the invention of what’s likely the most iconic tiki drink there is, the Mai Tai, which both Don the Beachcomber and Victor Bergeron, founder of the other early trend-setting tiki bar, Trader Vic’s, claim to have invented.

After the initial onslaught of tiki culture, the then-fad fizzled out for several decades. Over the past few years, tiki bars have come back into vogue again with most major cities across the country boasting at least one or two popular tiki bars. Craft cocktails continue to surge in popularity, and tiki bars are at the forefront of some of the most unique innovations in the space. Publications like Restaurant Hospitality have prominently featured the tiki craze, including “tiki time” as one of its nine major restaurant trends for 2017.

Tiki cocktails and concepts have certainly resonated with consumers. In Datassential’s MenuTrends Keynote Report: Alcoholic Beverages, we asked consumers about their interest in various alcohol megatrends, and tiki cocktails (described as “tropical rum and fruit-based drinks”) scored the highest, with over a third of consumers interested in trying them. In our recent issue of Creative Concepts: Next-Level Cocktail Bars, Datassential found that nearly three out of four consumers were interested in visiting a tiki bar, the single highest ranked cocktail concept we tested, as it outscored concepts like single-spirit bars and bars with cocktail tasting menus. 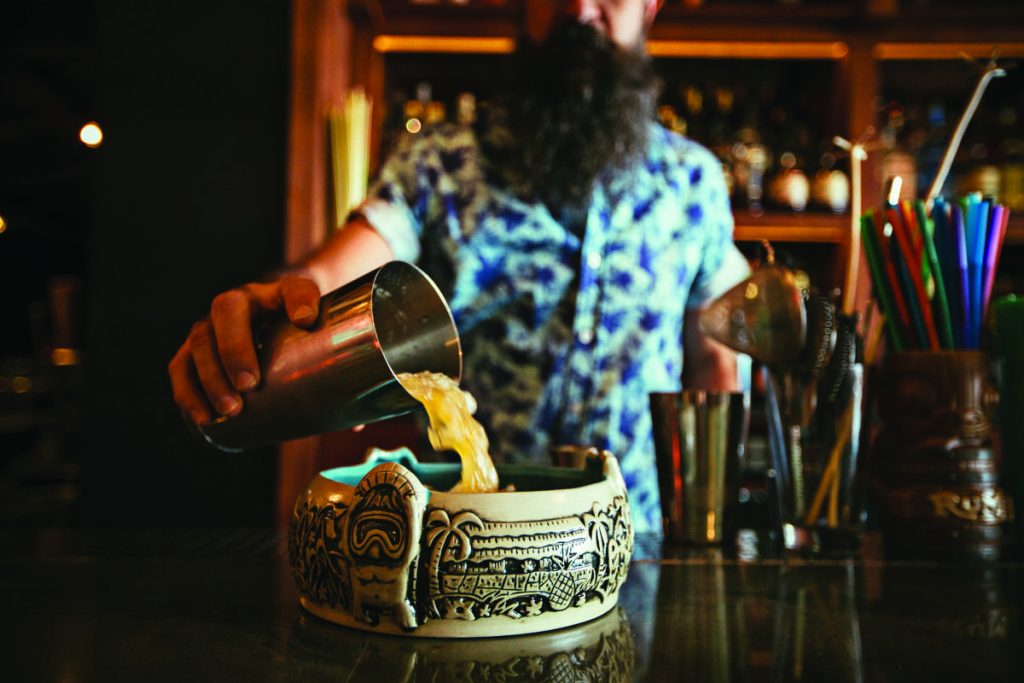 Like most everything else found in food service and hospitality, tiki drinks are undergoing a serious revival. What’s old, like Mai Tais, are new again as many tiki bars are now using artisanal rums, fresh juices and lesser-known spirits to elevate classics. That’s true even at cocktail bars where tiki drinks aren’t necessarily the focus. At the NoMad Bar in New York, Bar Director Leo Robitschek experimented with various recipes for a modern version of the Mai Tai, which, according to PUNCH, has gone through four revisions since it appeared on the menu 10 years ago. Robitschek refined a recipe from Trader Vic’s, house-making several versions of orgeat syrup and adding both Rhum Agricole and Jamaican rum to NoMad’s version. For another layer of flavor, a Guyanese rum derived from Demerara sugar is also added to the mix. Demerara has been trending on restaurant menus, according to Datassential’s menu tracker, MenuTrends.

In Chicago, Paul McGee, the acclaimed mixologist and beverage director behind several concepts, left the iconic tiki bar Three Dots and a Dash to open his next chapter in tiki-ology, Lost Lake. Opened in 2015 and named Imbibe magazine’s 2016 Cocktail Bar of the Year, its customers will still find tiki classics like daiquiris at Lost Lake – in its first year of business the team went through over 13,000 banana dolphins, the signature garnish on the popular Bunny’s Banana Daiquiri – but they’ll also find drinks made with spirits not so commonly integrated into tiki menus. The Curative Vibrations cocktail includes bourbon and a tamarind shrub combined with tiki bitters and pomegranate, while the Some Days Last a Long Time mixes Scotch whisky with sherry, lemon and absinthe, all highlighted with the island flavor of coconut.

Classic tiki drinks have inspired unique drinks at cocktail bars across the country. At Whitechapel Gin Bar in San Francisco, you’ll find North America’s largest selection of gins, along with a 17-page cocktail menu featuring options like The Modern Prometheus, a riff on the Zombie made with Royal Dock Navy Strength Gin, Diep 9 Oude Genever, Plymouth Sloe Gin, Velvet Falernum, absinthe, grapefruit, cinnamon bitters and lime. Another San Francisco bar, Louie Gen Gen Room, located underneath Liholiho Yacht Club, offers island-inspired drinks to complement Hawaiian cuisine. The Castaway cocktail “manages to extract a whole lot of complexity from just three ingredients,” PUNCH says of the manzanilla sherry, green chartreuse and salted Falernum drink. Mother of Pearl in New York City calls itself a post-modern Polynesian-inspired tiki restaurant and cocktail bar, complete with drinks like the Shark Eye with curacao and bourbon, passion fruit, lemon and maraschino bitters, served inside a shark’s head glass. Gothamist calls the Imperial Bulldog the bar’s most photogenic drink, made with cachaça and aquavit, and served with a garnish of raspberries and an overturned bottle of Underberg, a German digestif. The menu also includes large-format drinks (shared drinks served in vessels like a treasure chest are staples at tiki bars) like the Regents Royal with rum, green tea cachaça, dry curacao, sparkling wine and the fruity flavors of pineapple, strawberry and lime. 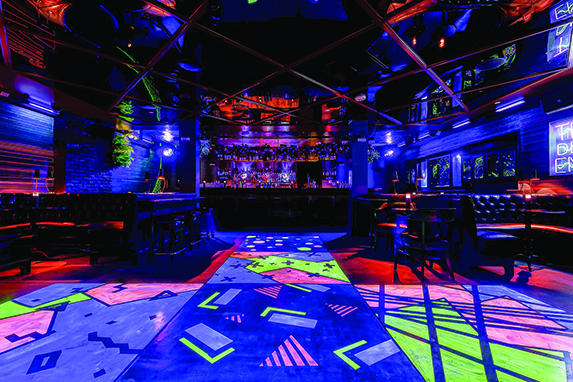 Next Level Tiki – Where to Next?

While the original tiki wave faded out for few decades, it’s safe to say the current trend is anything but a fad. The tiki bar is far more than just a watering hole with tropical, fruity drinks. Further fueling its resurgence is the tiki bar’s ability to transport customers into a different land altogether. As island culture and Hawaiian-inspired foods and beverages continue to trend in restaurants, expect tiki operators to become even more innovative and adventurous. Many tiki mashups have also opened, adding another level of uniqueness to the original tiki bar concept. Chicago’s Bunny Slope, a ski-themed bar that plays into eatertainment venues, offers a mix of ski- and tiki-themed cocktails housed in a space complete with log cabin walls, snowflake floors and a hot tub. The Deep End at downtown Los Angeles’ Honeycut transformed into a self-described “space-age tiki-ish bar” last year, complete with décor accents like a neon aquarium and glow-in-the-dark dance floor crafted with UV-reactive paint, and out-of-the-ordinary takes on tiki drinks. Clarified lime is used in the Cave of Wonders with two different types of rum, Campari and pineapple – and of course, garnished with an umbrella – while the Proper Motion, served in a classic tiki mask vessel, mixes ghee-washed Cognac-Armagnac, ristretto, vanilla, pineapple and lime. At Porco Lounge in Cleveland, the new Polpetta at Porco lounge marries tiki cocktails with meatballs (because, why not?), a pairing that first made “absolutely no sense” to chef Brian Okin, but actually worked out perfectly, because as he told CleveScene, “Everybody loves meatballs.”

For more on how the tiki bar could evolve even further with other craft cocktail trends, contact Datassential, an expert food and beverage market research company.

This article has been provided by Renee Lee, Senior Publications Specialist at Datassential, a leading consulting firm and supplier of trends analysis and concept testing for the food industry. (renee.lee@datassential.com)