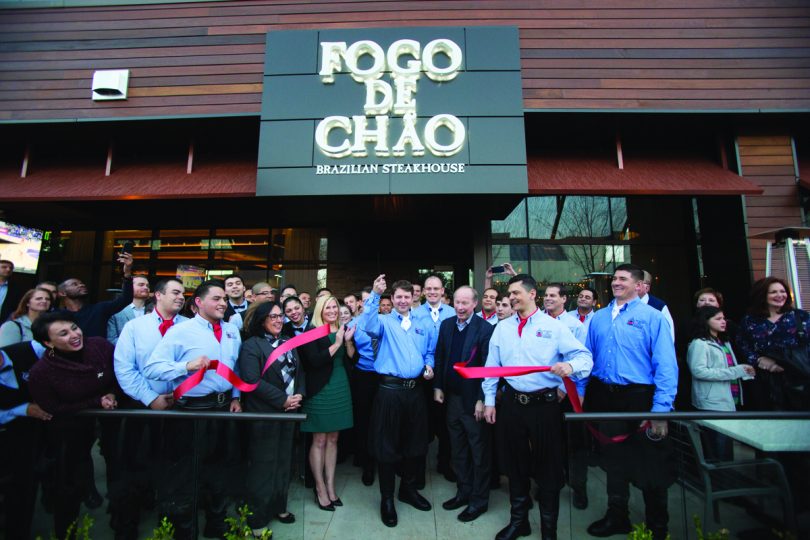 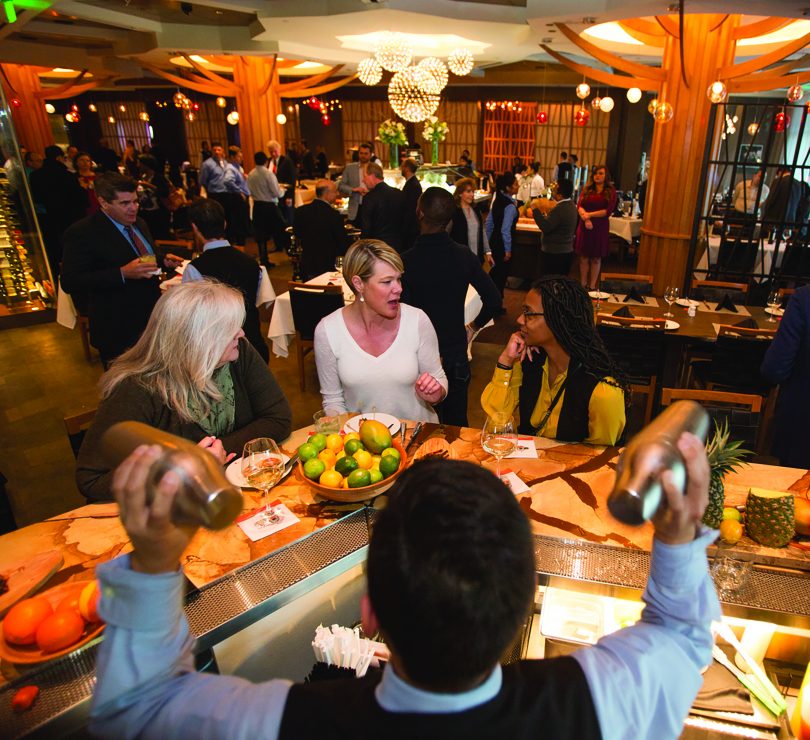 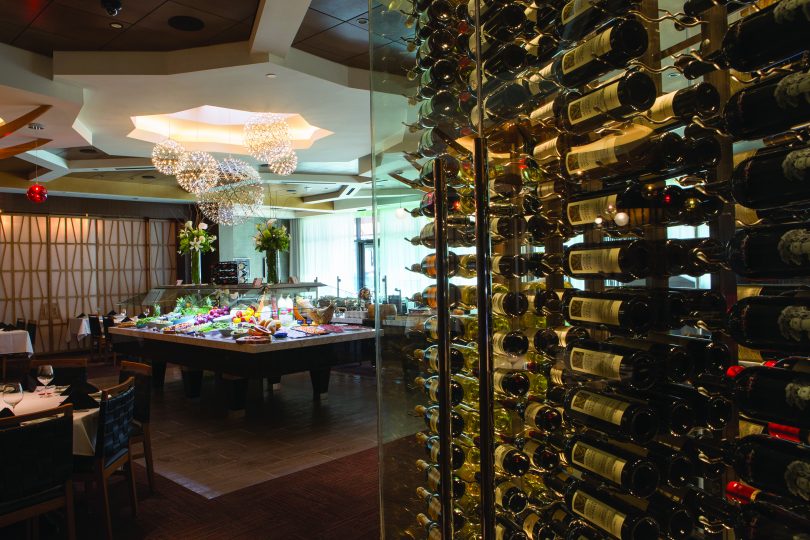 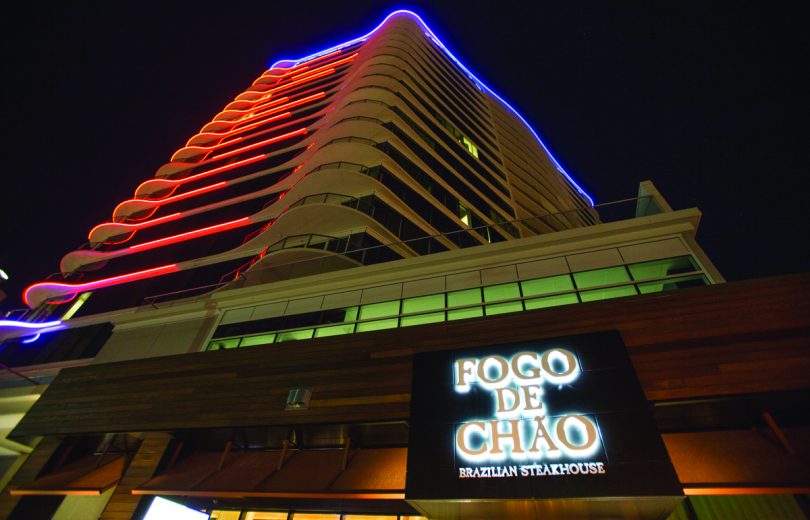 Located in the luxurious One Uptown high-rise apartment tower. 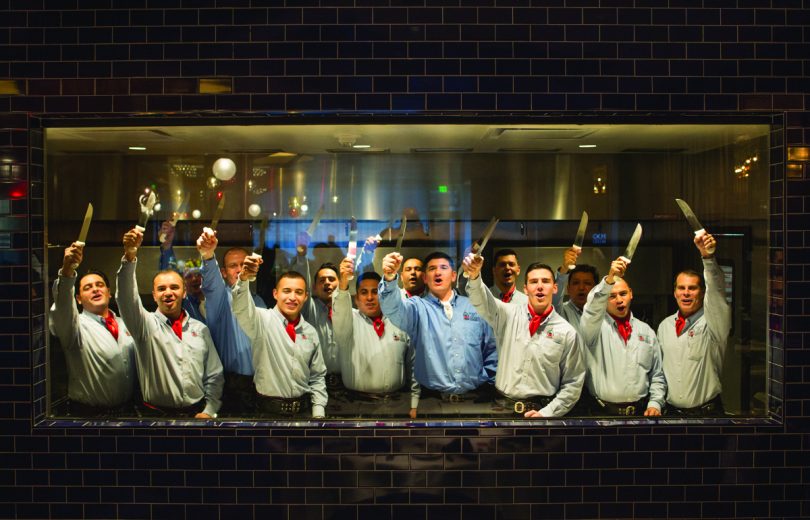 “Our Addison, Texas location, which opened in 1997, was the first place in the world to host a Fogo de Chão outside of Brazil,” said Larry Johnson, Chief Executive Officer of Fogo de Chão. “We’re excited to add a second Dallas-area location in the heart of Uptown, one of the most dynamic and fastest-growing neighborhoods in the country, and believe that our guests will love our new space at One Uptown.”

Fogo de Chão shares the Brazilian gaucho traditions of “churrasco,” the art of roasting meats over an open fire, and “espeto corrido,” or “continuous service.” The menu features a wealth of savory, fire-roasted meats that are prepared and carved tableside for each guest by a team of authentic Brazilian-trained gaucho chefs. Guest favorites include filet mignon, lamb chops and ribeye, as well signature Brazilian cuts like the house specialty, Picanha sirloin. As a complement to the variety of protein options, guests can also enjoy the gourmet Market Table and Feijoada Bar, which includes seasonal salads, soups, fresh vegetables, Feijoada (Brazilian black bean stew) and authentic Brazilian side dishes. Boasting a vibrant dining room, expansive outdoor patio and lively bar area, the new Uptown Dallas location offers a variety of dining options and experiences for everyone. 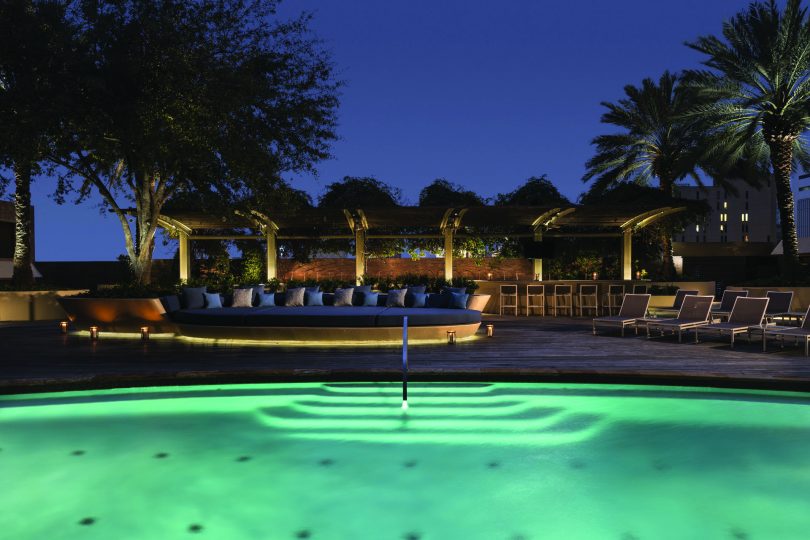 The pool setting at night. 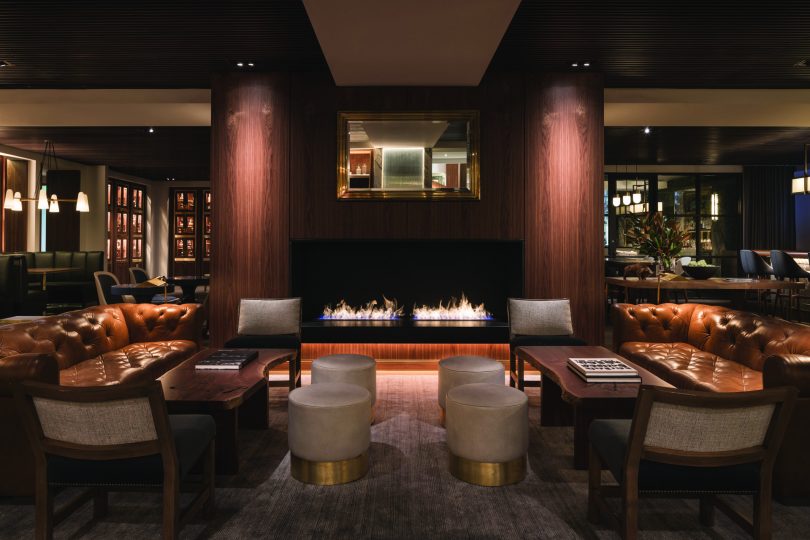 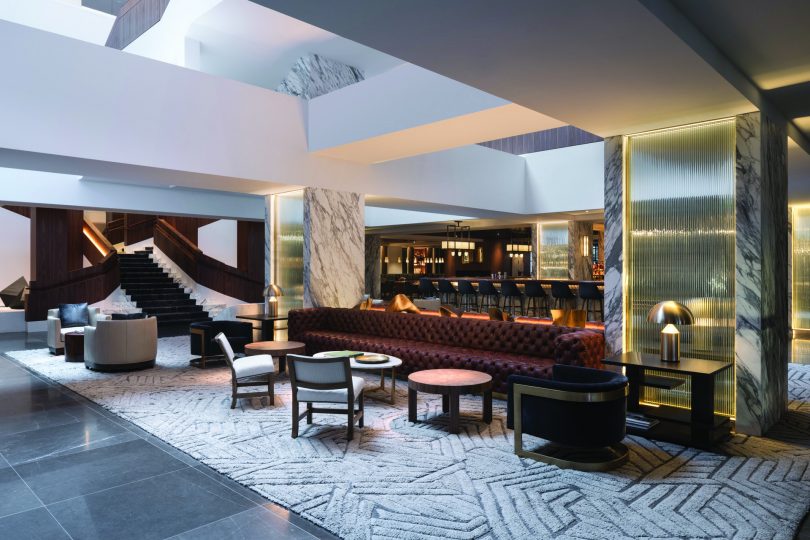 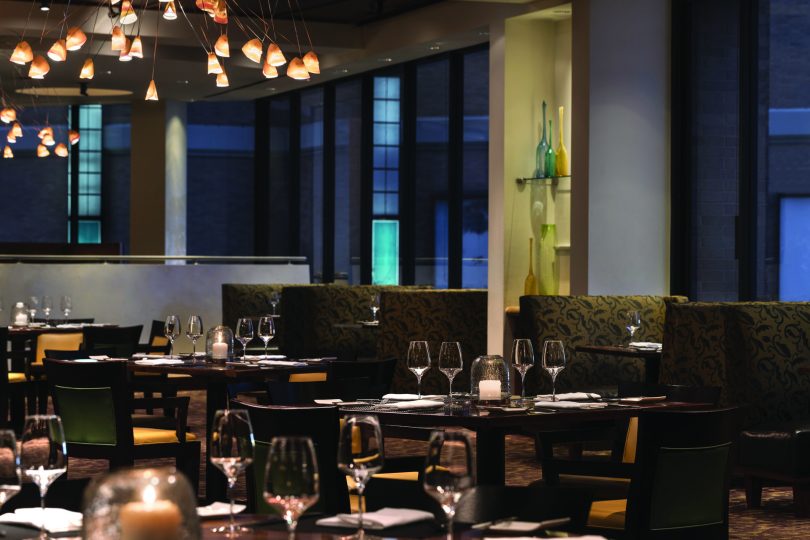 Dining room of the Quattro Restaurant, meaning “four” in Italian and representing the four “faces” of the restaurant: breakfast, lunch, dinner and a lively antipasto bar.

Four Seasons Hotel Houston unveiled Phase II of its massive and extensive year-long renovation project this past January 2017. The project rolled out exhilarating new amenities that have converted the downtown fixture into a one-stop shop for social gatherings, meetings, recreation and relaxation.

“The completion of Phase II of the extensive renovation project at Four Seasons Hotel Houston represents the culmination of hard work on the part of multiple parties and a vision that places Four Seasons firmly at the forefront of downtown Houston’s future,” commented General Manager Tom Segesta, a 28-year Four Seasons veteran. 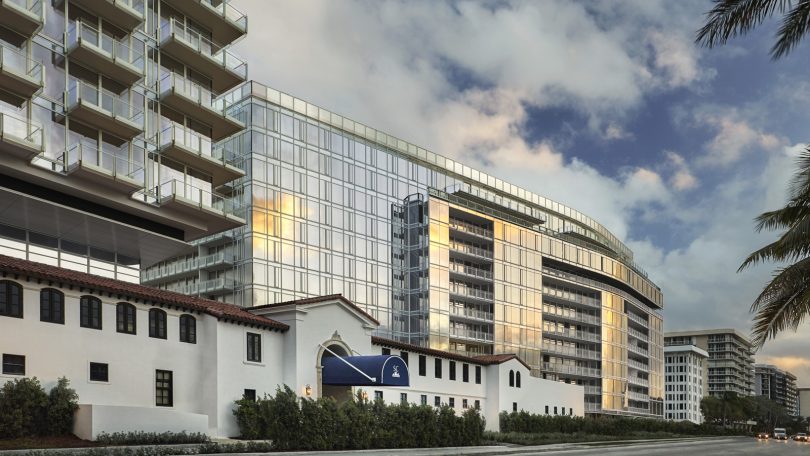 The grandeur of The Surf Club. 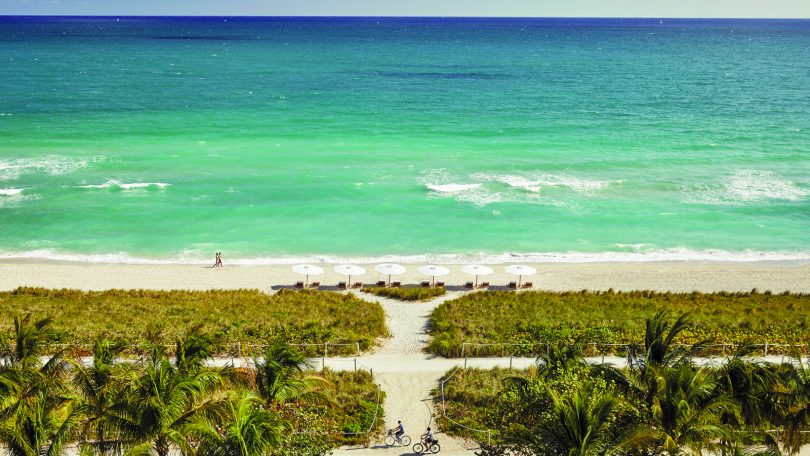 The beautiful beach on the Atlantic Ocean. 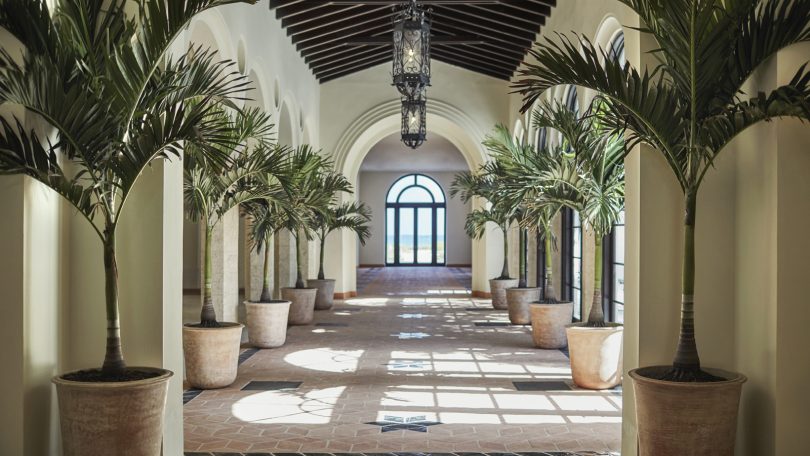 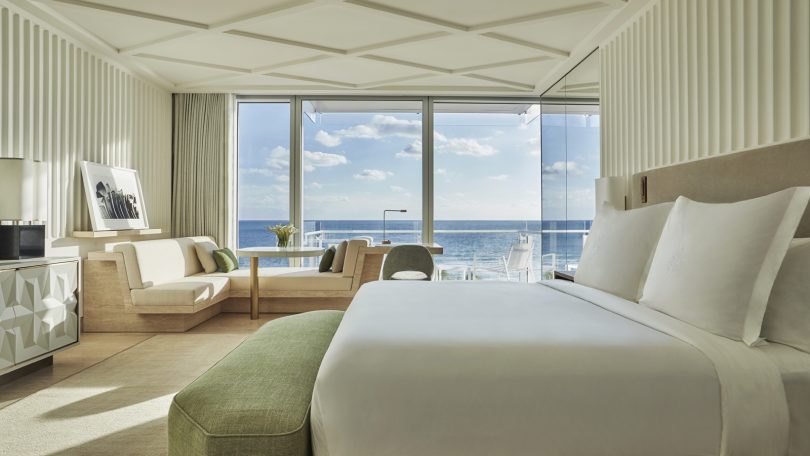 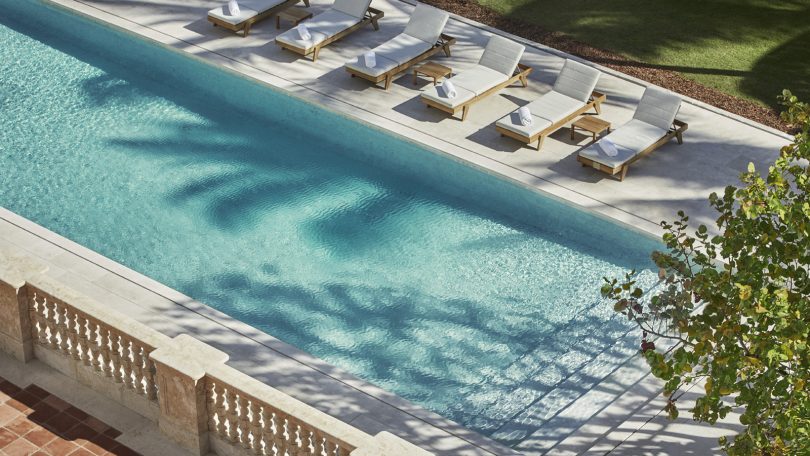 One of the three glistening pools.

“The Surf Club’s success has always been determined by quality, passion and relaxed precision, and that remains our priority today – being intuitive, exceeding our guests’ every expectation and creating memories that will last a lifetime,” says General Manager Reed Kandalaft. 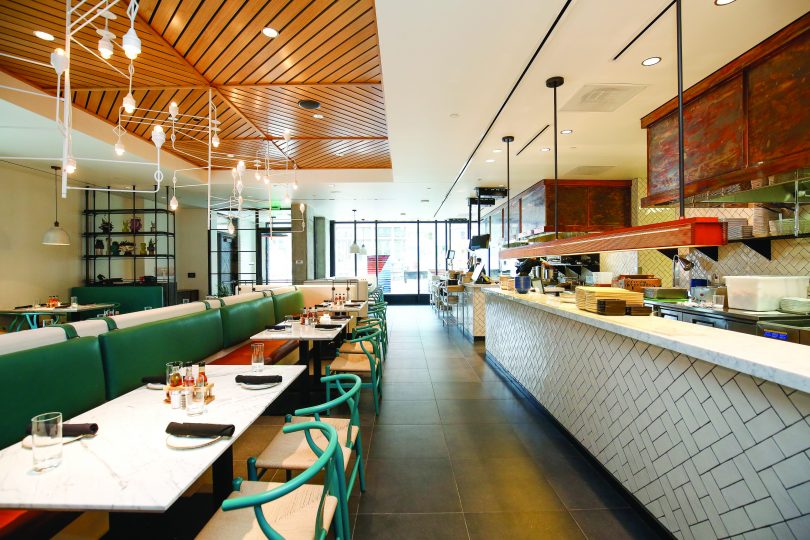 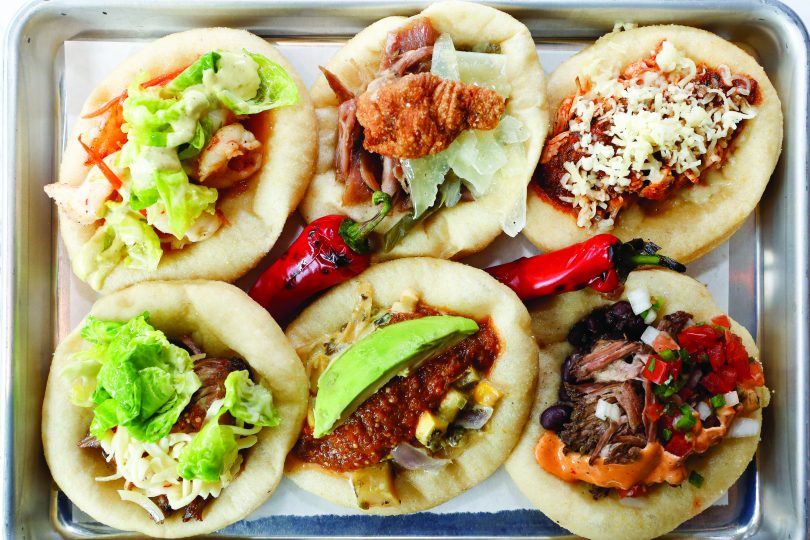 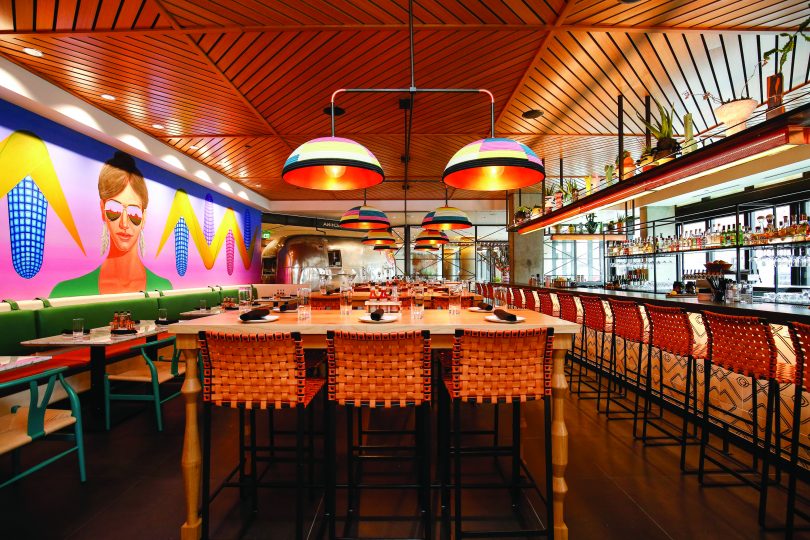 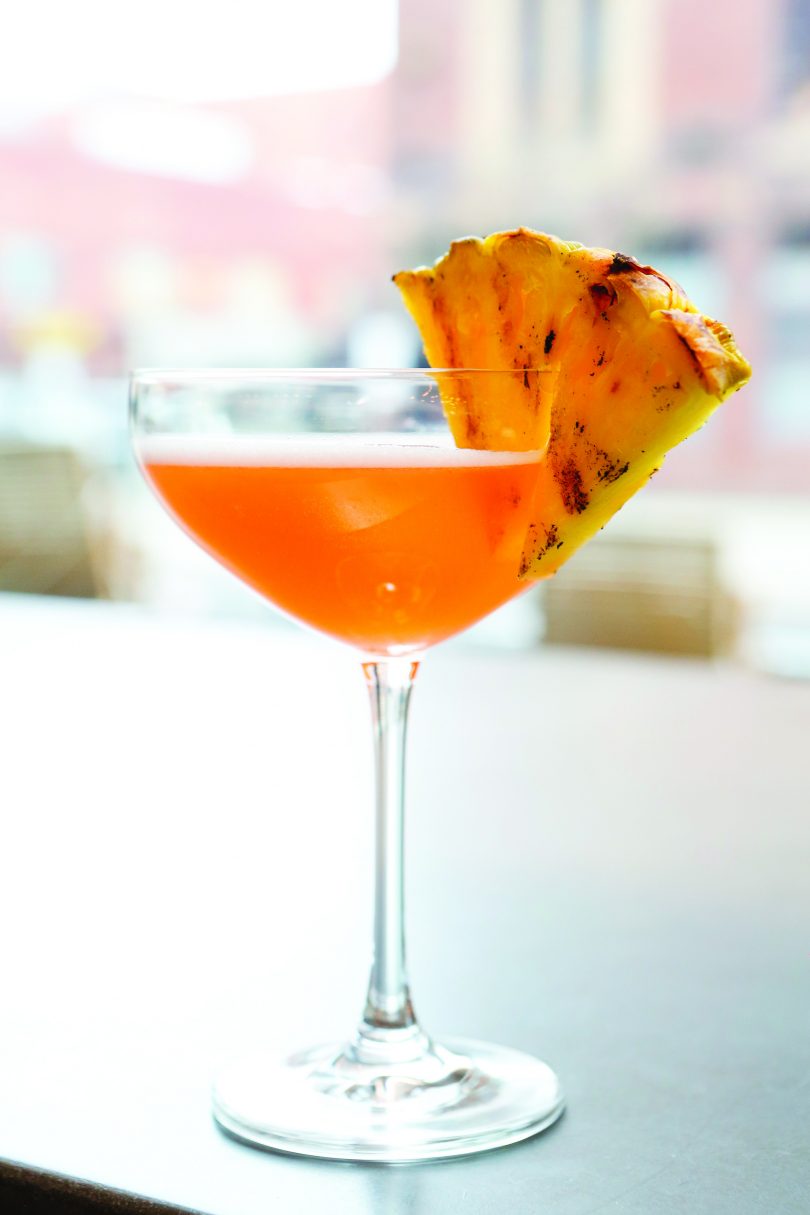 “Kachina Southwestern Grill is a truly unique concept, fusing together authentic flavors of the Southwest for a contemporary dining experience,” says Peter Karpinski, Co-Founder of SRG and Denver resident. “I’m proud to introduce Kachina to downtown Denver – the restaurant’s inventive menu, cocktails and unique décor will undoubtedly make it a destination for both local and visiting diners.”

Under the guidance of Executive Chef Jeff Bolton, who helmed the kitchen of Kachina’s first location in Westminster, the restaurant’s cuisine combines the culinary styles of the American Southwest and New World. Kachina’s in-house butcher program reinforces a native respect for the land, in that the whole animal is used in the most creative and succulent manner. The restaurant’s partnerships with Native American tribes’ businesses, such as Ramona Farms located on the Gila River Indian Reservation in Arizona, and exploration of their unique Southwestern ingredients, brings a whole new layer of spice and originality to the menu. 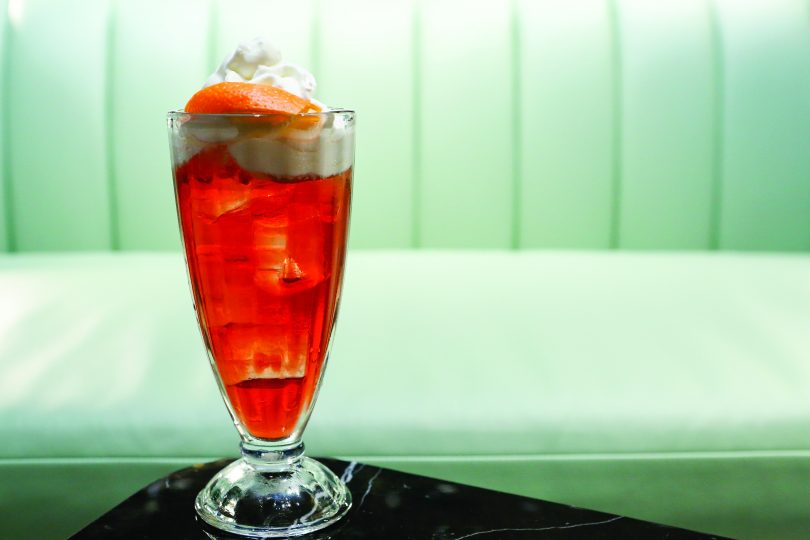 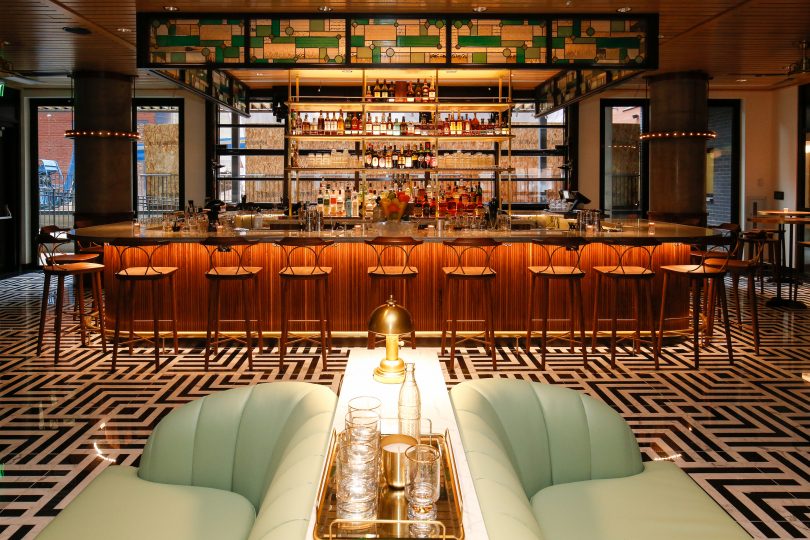 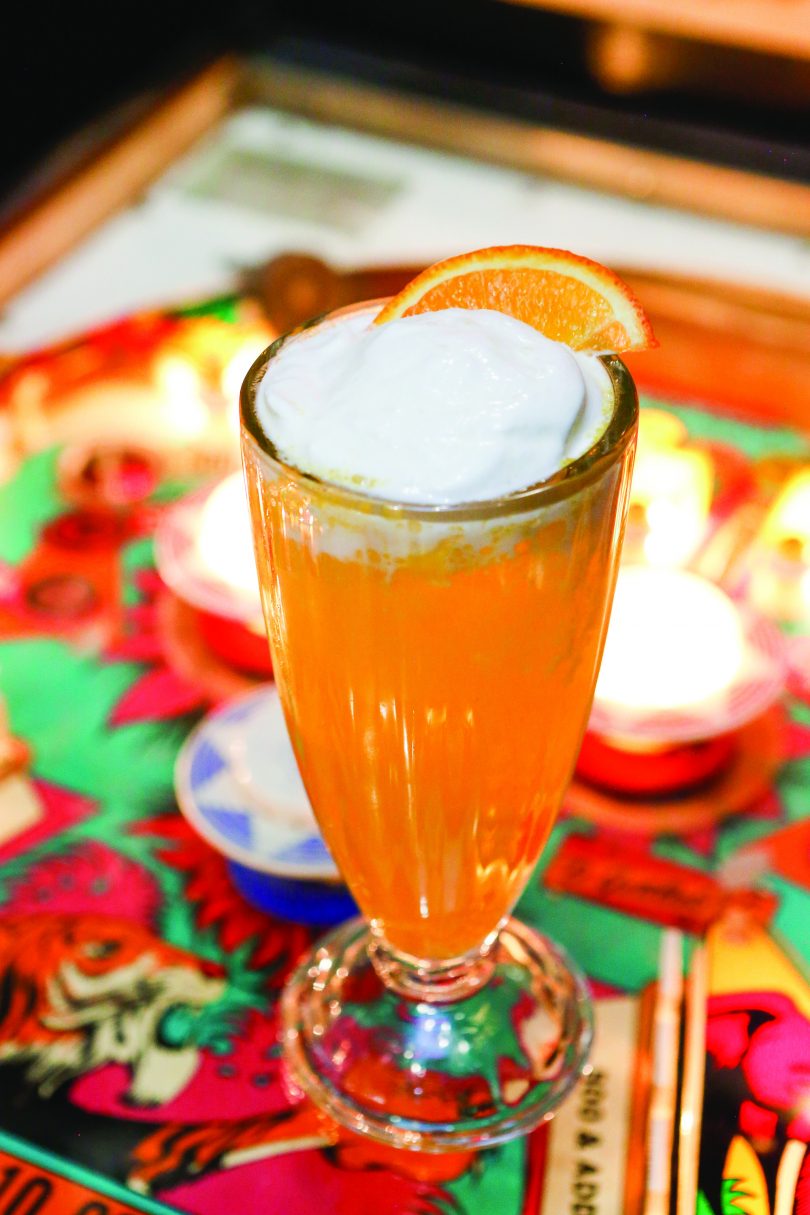 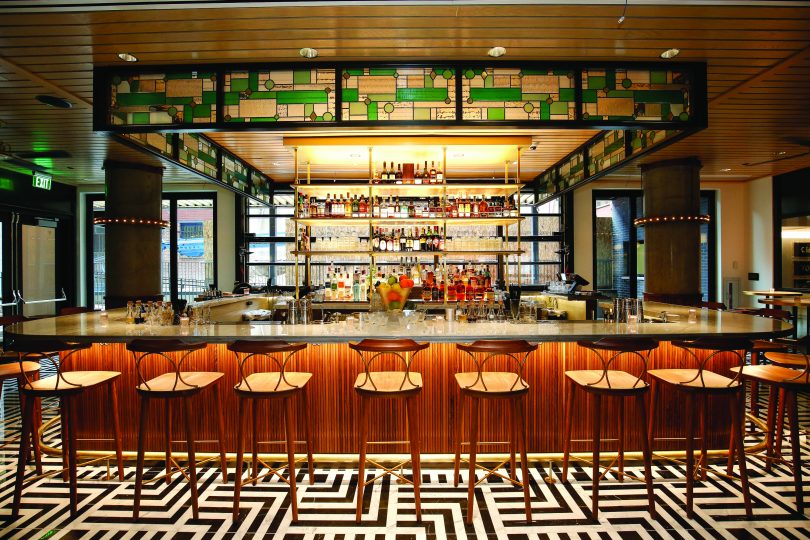 “We created Poka Lola Social Club to simply be a fun place, from the 1950s-inspired design and its inviting, open layout, right down to the fountain-style cocktails and cheeky phrases on the coasters,” says Peter Karpinski, Co-Founder of SRG. “With a prime location at the new Dairy Block, this bar will be in the core of downtown Denver’s most exciting development. We’re eager to meet and have a drink with all of our guests, with the hope that everyone feels at home.”

Unique to Poka Lola are specialty sodas made with locally sourced seasonal ingredients, which are bottled on-site for use in cocktails, to be enjoyed on their own or be taken home by guests. 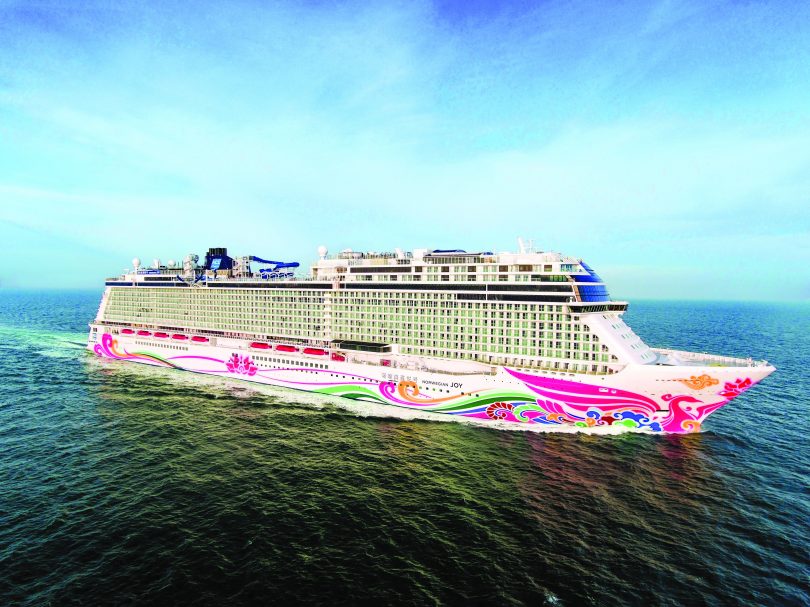 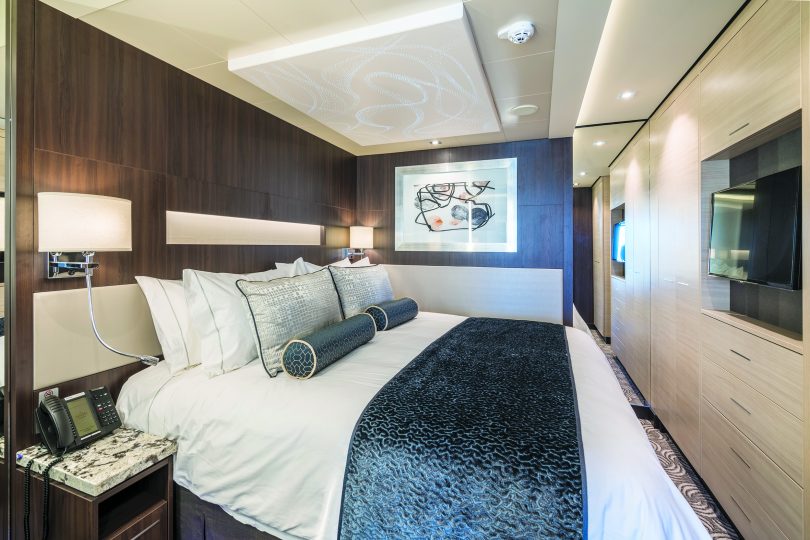 The Courtyard Suite is one of the many accommodation choices aboard the Joy. 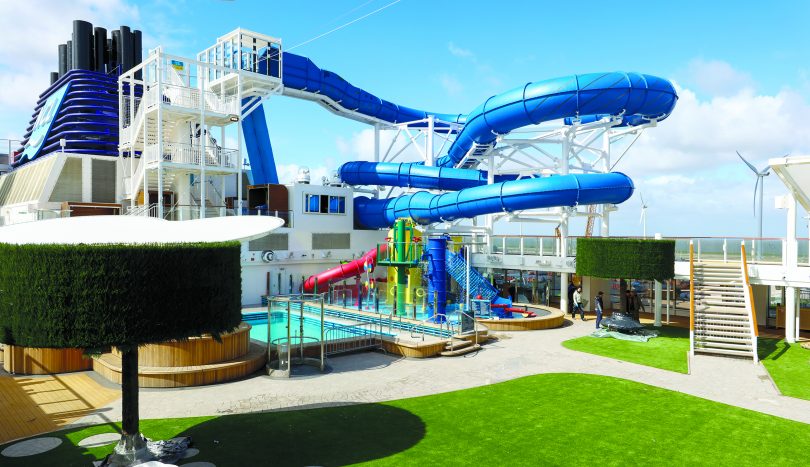 The waterslides and park area being readied for the opening.

Norwegian Cruise Line took delivery of Norwegian Joy this past April, from MEYER WERFT during an on-board ceremony in Bremerhaven, Germany. It is the brand’s 15th ship and the first one custom designed for the Chinese cruise market. At 167,725 gross tons and accommodating 3,883 guests, Norwegian Joy is the second ship in the line’s Breakaway-Plus class. It features an innovative design with amenities tailored to provide a “First Class at Sea” experience for Chinese guests, with the elements of freedom and flexibility that Norwegian Cruise Line has become known for across the globe.

“With this incredible ship, we have taken Norwegian’s signature on-board experience and expanded and customized it with exciting features, services and amenities that combine the best of the East and the West,” said David Herrera, president of Norwegian Cruise Line Holdings China. “We are honored to deliver this spectacular ship to our Chinese guests and we can’t wait to see Norwegian Joy come to life when she welcomes her first guests upon her arrival in China this June.”