Before the start of the conference, the official charity of VIBE, Children of Restaurant Employees (CORE) invited operators to its annual “Giving Back to Our Own” party on Monday, Feb. 27. During the party, guests bid on a variety of prizes available at the nonprofit’s silent auction while listening to CORE parent Todd Davidson playing in a three-piece jazz trio. There was also a surprise guest – Todd’s daughter and CORE grant recipient Julia Davidson, who sang her favorite song, “Rainbow Connection,” for party attendees. Through the event and its partnership with VIBE, CORE raised $56,000 for families in the food and beverage industry facing terminal illnesses or sudden losses. 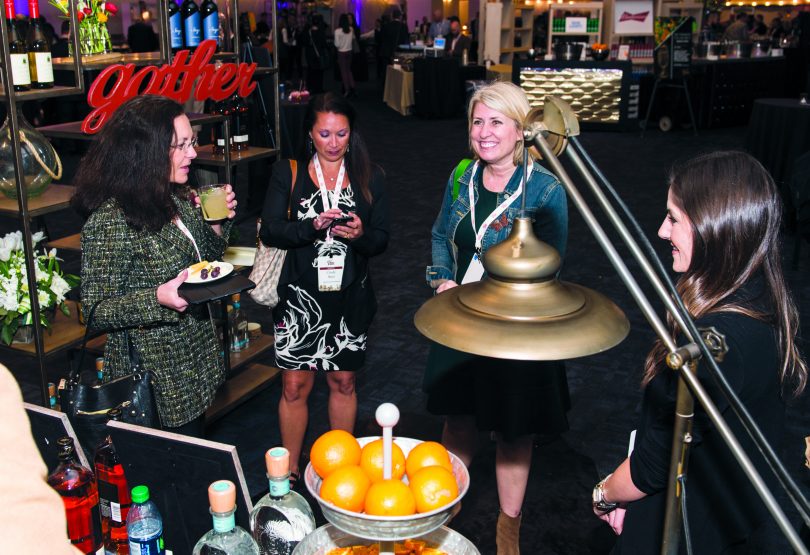 Socializing and networking are always key elements of the VIBE Conference. 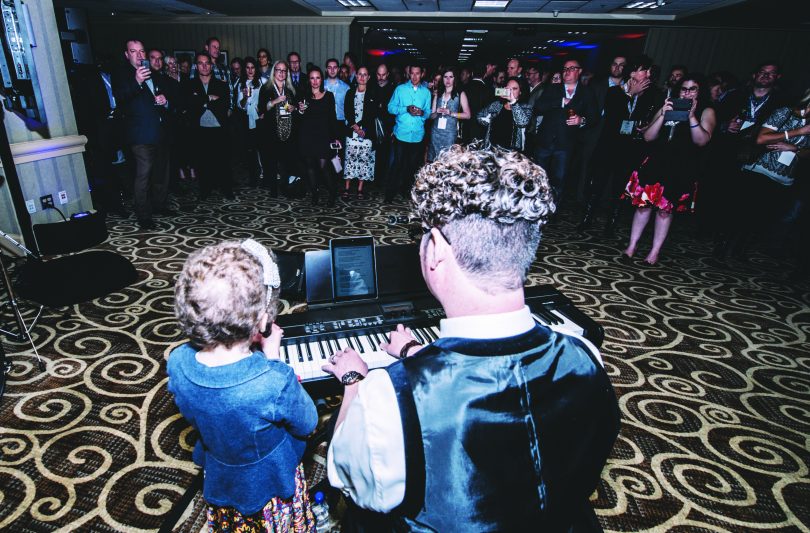 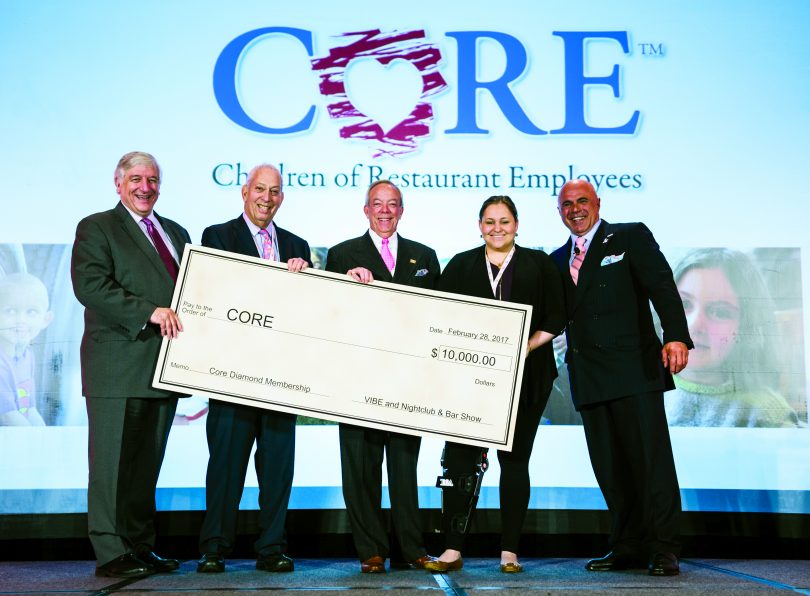 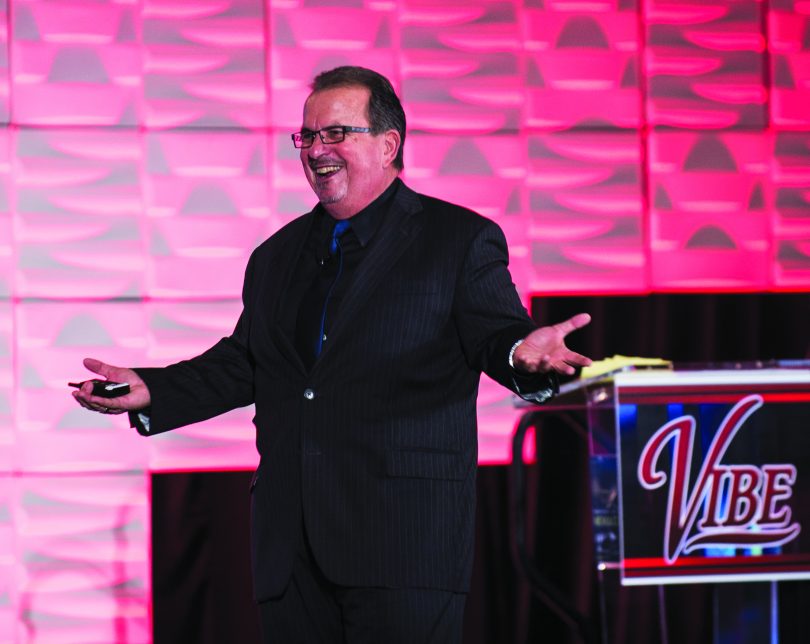 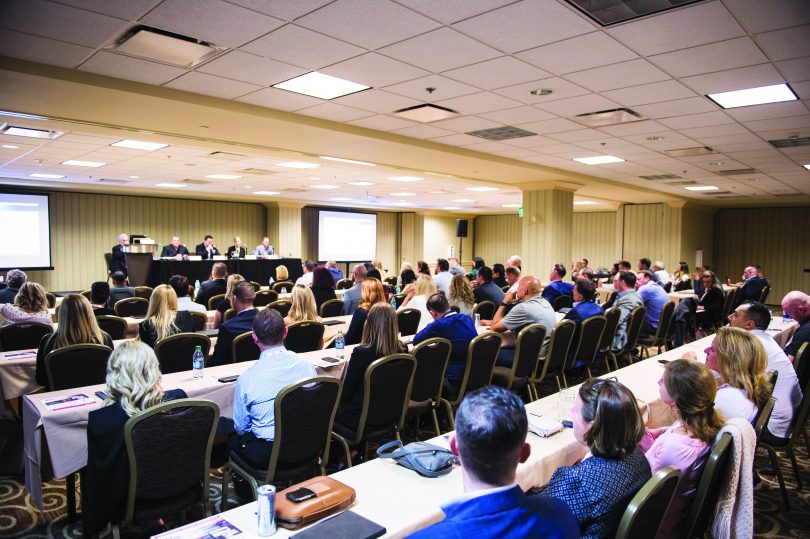 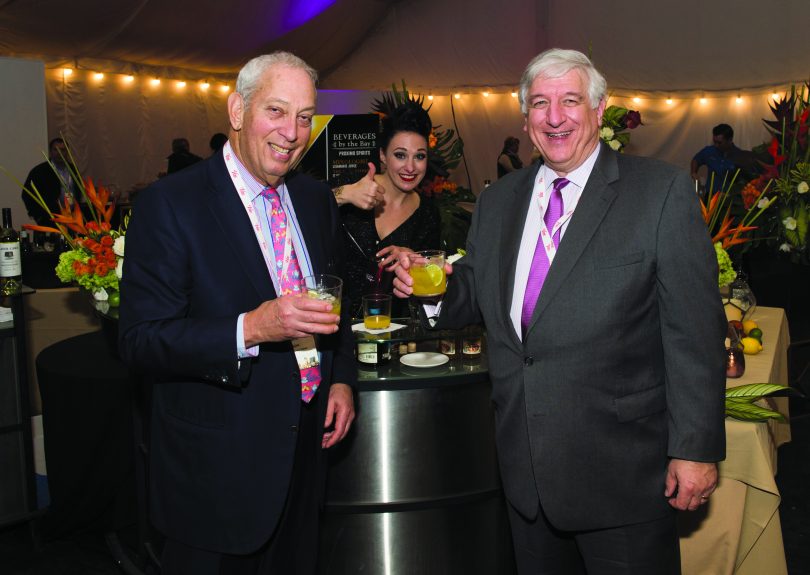 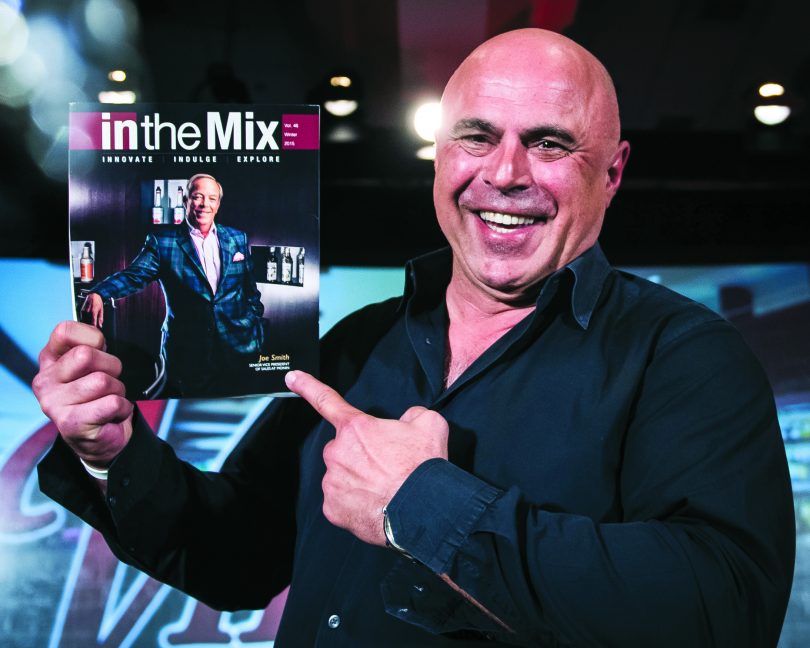 Tony Abou-Ganim holding up in the Mix magazine featuring Joe Smith from Monin on the cover.

On Tuesday, Feb. 28, President and CEO of Questex LLC, Kerry Gumas and celebrity mixologist, Tony Abou-Ganim, kicked off the main two-day event by welcoming operators to the VIBE Conference inside the Sheraton San Diego Bayfront. Following the opening remarks, attendees were treated to an innovative keynote session with the President of KGC Direct, LLC, Kenneth Gronbach. During his session, Gronbach spoke about forecasting societal, political, economic, cultural and commercial phenomena through understanding demographics.

General sessions included “Voice of the Millennial Consumer” presented by Donna Hood-Crecca and Dave Henkes of Technomic, and “Annual VIBE On-premise Beverage Consumer Trend Study” presented by Mike Ginley of Next Level Marketing. Hood-Crecca and Henkes led a panel of Millennials to share what they look for in drink offerings and what influences their purchases. Ginley shared results of a study conducted just prior to the conference, offering the most current information available in the beverage industry.

During the conference, operators had access to four workshop series featuring a variety of tastings, research sessions and discussion panels.

After the sessions, attendees networked at the welcoming cocktail party, while sipping on delicious craft cocktails prepared by celebrity mixologists as well as enjoying beer and wine at the sponsored themed bars.

The final workshop series concluded with a panel of the VIBE Vista award winners discussing their winning programs with Novack. Closing out the conference, operators attended the “Thumbs Up & Thumbs Down” session presented by chain account beverage specialist David Commer and a panel of beverage executives. Speakers weighed in on trends regarding liquor, beer, wine and alcohol-free spirits.

VIBE Conference, a division of Boston, Massachusetts-based Nightclub & Bar Media Group, is the premier event for chain and hotel adult beverage executives and suppliers. This top on-premise conference is held annually and involves high-level content, tastings and networking opportunities. The 2018 conference will be held at the Sheraton San Diego Hotel & Marina, Feb. 26-28. 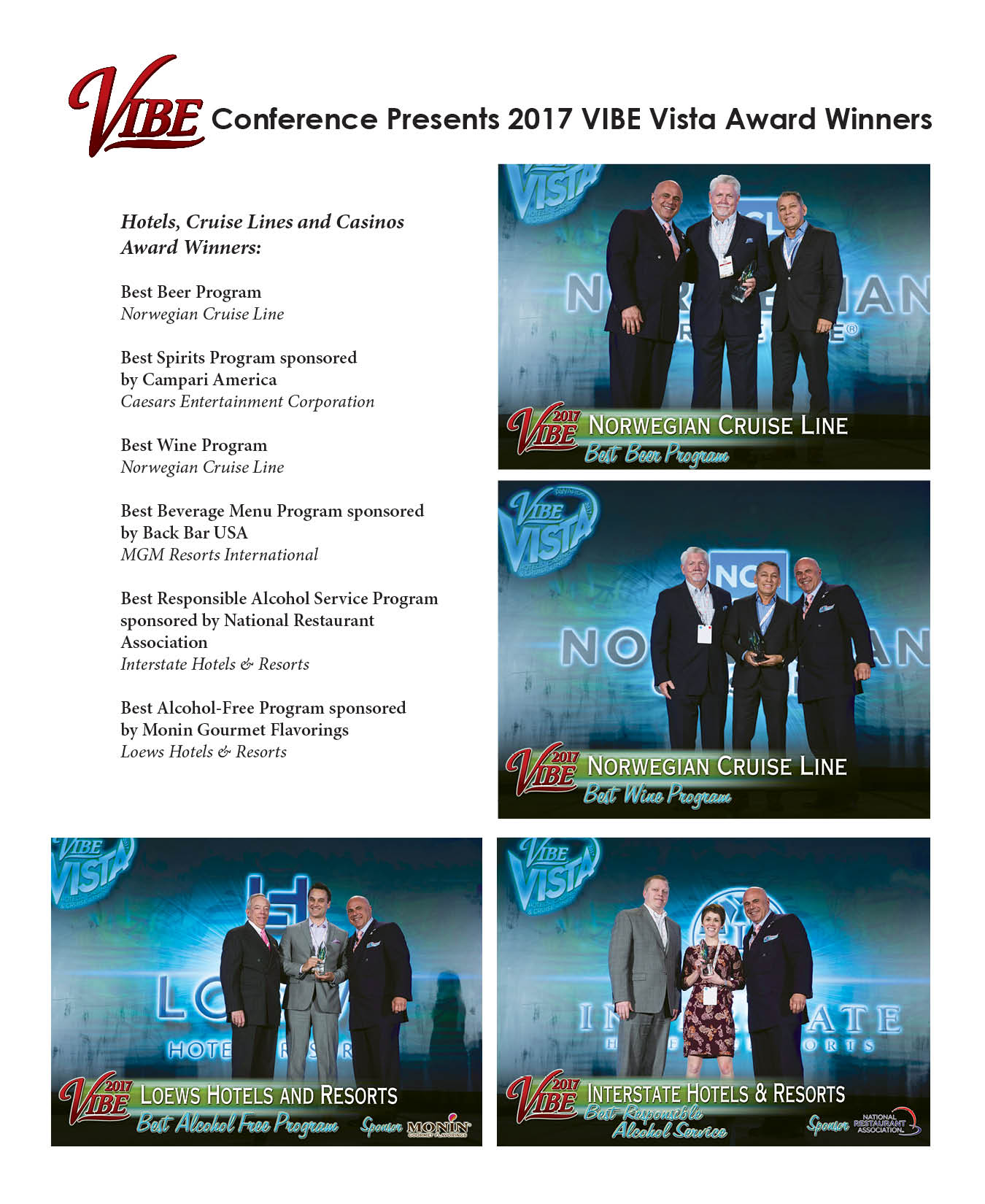 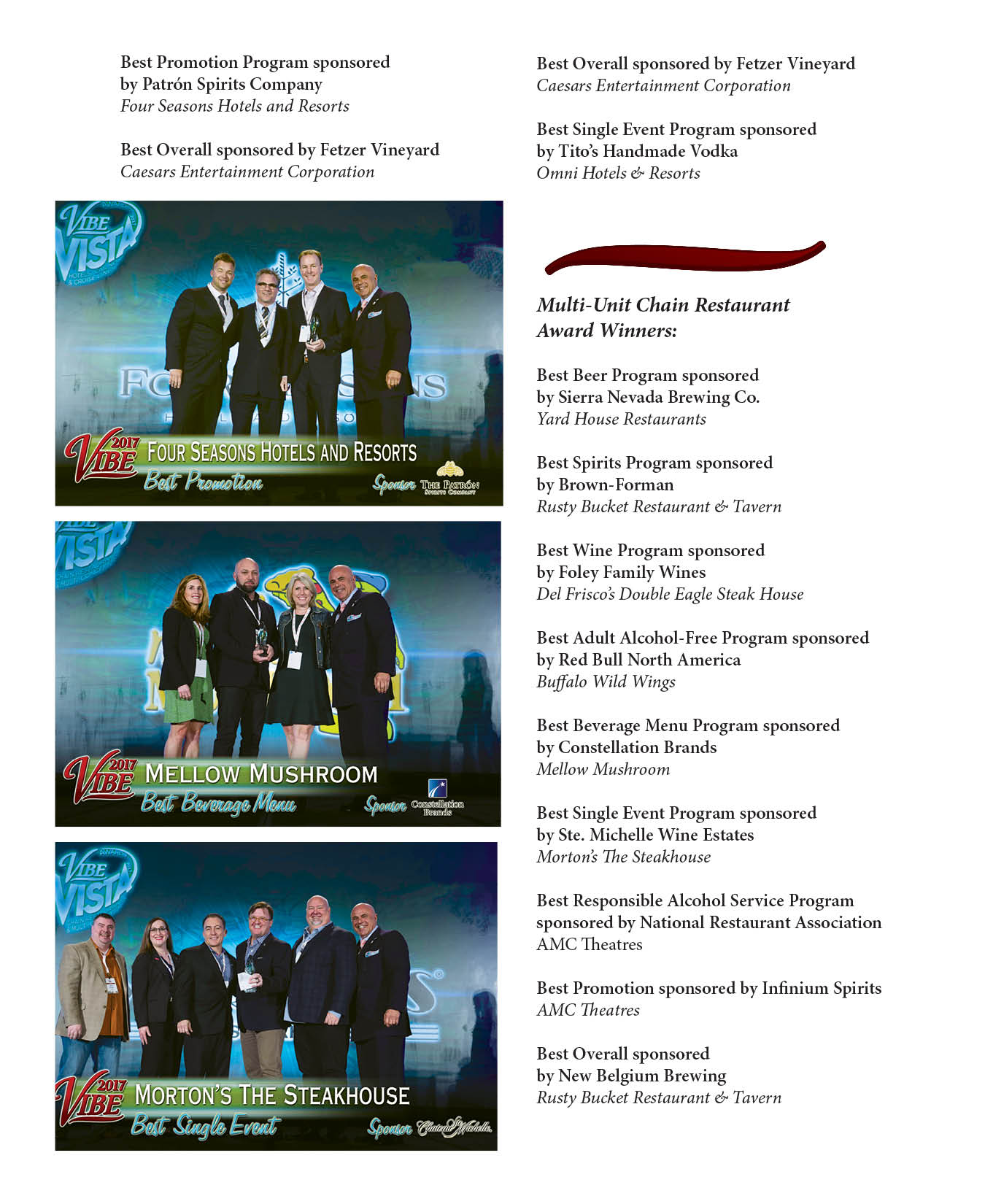