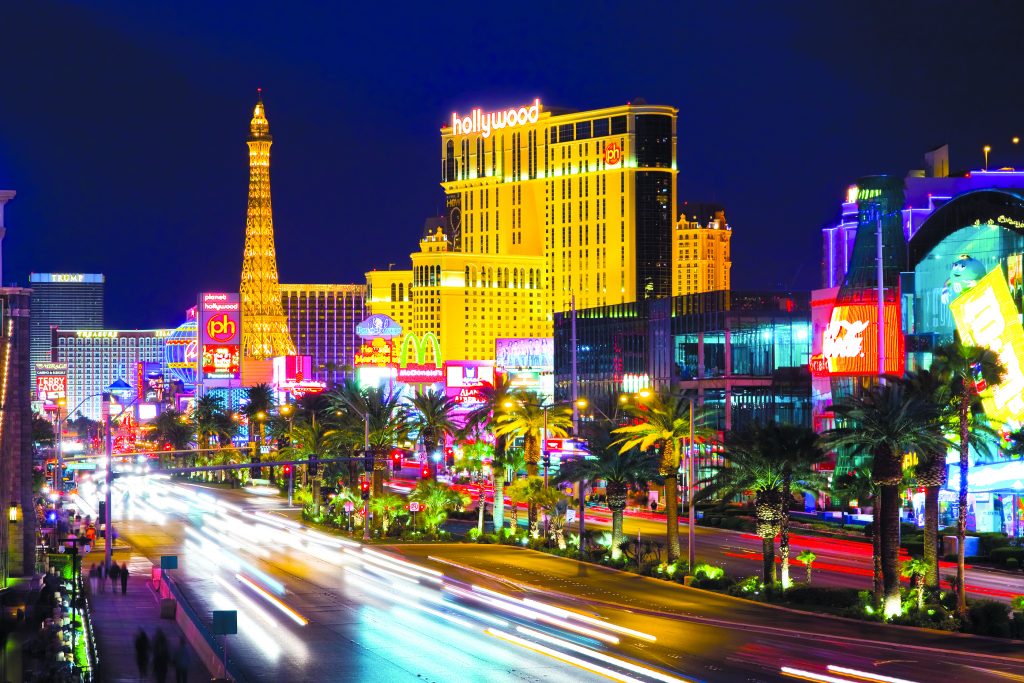 George, back in Las Vegas, was craving dim sum and that always meant a trip to Fat Dumpling. So he grabbed a cab from the Strip and made the short trip to Chinatown, where a plate of steamed dumplings awaited. He arrived early in the night and the small restaurant was not yet busy, so he was seated quickly. After perusing the extensive menu, he ordered all his favorites, starting with a lamb kebab, green onion pancake and pot stickers. He followed this up with an order of steamed pork buns, pork & cabbage dumplings and some Singapore rice noodles. Yes, he was a little hungry and everything was so good he always had a hard time deciding, so why not have it all?

His meal was fantastic but the only thing wrong with Fat Dumpling is they don’t serve any booze. George had some hot green tea with his meal but was desperately in need of some liquid stimulation. After paying the check, he asked his server for a recommendation to a nearby drinking establishment.

“You just need to go four doors down and visit my friends at Golden Tiki,” his server answered. “They make some tasty tropical drinks.”

Walking into Golden Tiki reminded George of a visit to Trader Vic’s years ago, as it was decorated with tropical, Polynesian artifacts, so he knew he was in the right place to find a drink to wash down his yummy dim sum dinner. Grabbing a spot at the end of the long bar in front of a blinking video poker machine, he was quickly approached by an extremely personable bartender. 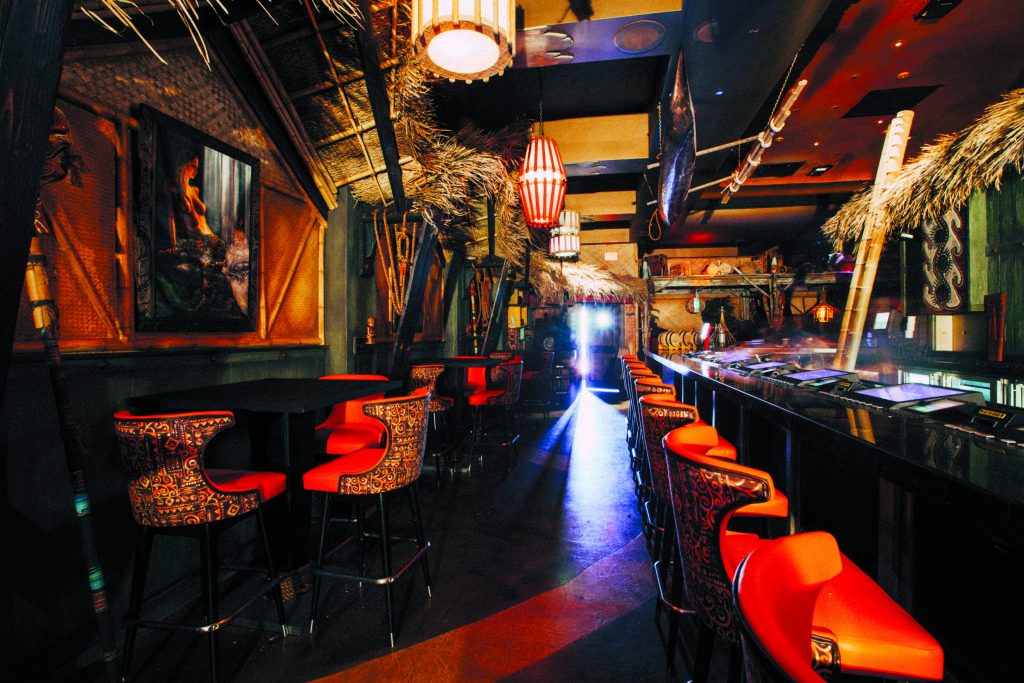 “Hi, I’m Jada. Welcome to Golden Tiki. Would you like to see our menu?” she inquired.

“Hello, Jada. Well yes, but I just ate next door at Fat Dumpling and would love to have something to drink that would work with their wonderful dumplings,” George replied.

“I love Fat Dumpling! You should have one of our Singapore Slings — they’re one of my personal favorite things on the menu,” she suggested.

“I have not had a Singapore Sling in years,” George responded. “It’s basically a Tom Collins with cherry brandy, right?”

“Well, that’s one way to make it, I guess,” she said, smiling. “We base our recipe off of the Raffles Hotel’s in Singapore, where the drink was allegedly first created in 1915.”

“I’ll have one,” George ordered.

While the bartender was preparing his Sling, George put $60 in the video poker machine just for fun, always being a sucker for a slot machine.

George took a sip of the tall, dark pink libation and found it to be very refreshing, with a touch of cherry sweetness balanced nicely with acidity coming from freshly squeezed lime juice and the sharpness of the gin. It was indeed the perfect complement to the dim sum he had just enjoyed.

“So, what do you think — did I steer you wrong?” Jada inquired.

“Delicious — just what I had envisioned. Matter of fact, I think I’ll have another,” George answered.

Just then, he drew four aces on the video poker machine, which paid $200. George cashed out, finished his Sling, paid his tab, and tipped and thanked Jada. His winnings also covered the cost of his dinner at Fat Dumpling, his cab fare to and from the Strip, and he still had $30 left for a nightcap back at the hotel. You have got to love Las Vegas!

On the ride back to the hotel, George couldn’t stop thinking about the Singapore Sling and the Raffles Hotel where the drink was created over a hundred years ago. By the time he reached the hotel, he had made up his mind to book a trip to Singapore and visit the historic Raffles Hotel, to get to the bottom of this mysterious libation.

The next morning George called his travel agent, who he keeps on speed dial, and inquired about a trip to Singapore. She informed him that his favorite cruise line, Crystal, had a cruise departing from Singapore in four days, en route to Hong Kong. Well, it took about 30 seconds to make up his mind and have his agent book a business class ticket on the United Dreamliner to Singapore, a night at Raffles Hotel and a balcony cabin on Crystal Symphony. 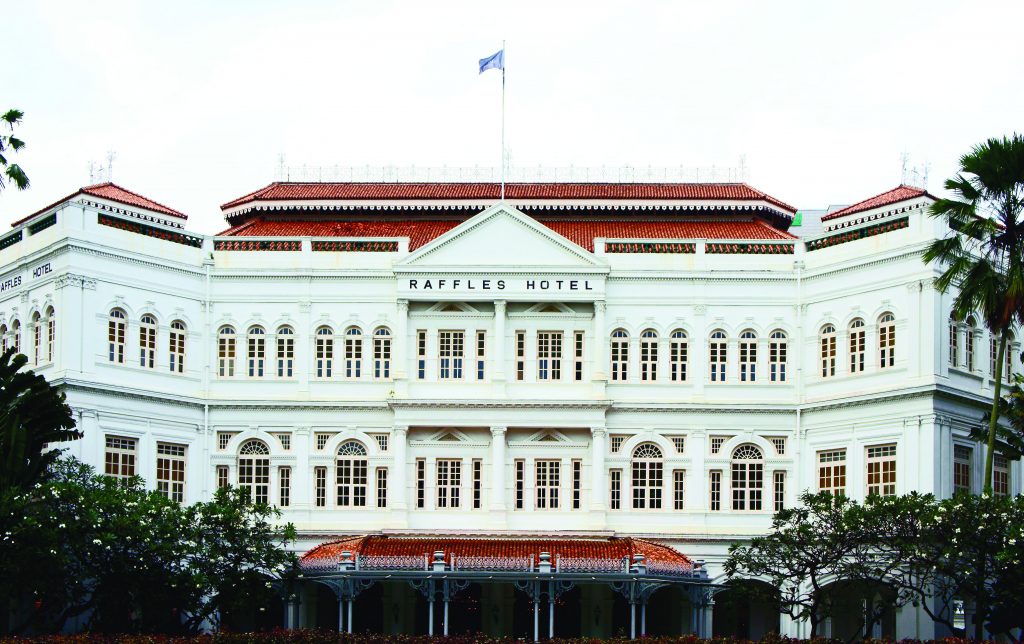 George arrived in Singapore 48 hours later, suffering from jet lag, and checked into his room at Raffles. He made a reservation at The Bar & Billiards, where the Sling was currently being served, as the Long Bar was closed for remodeling. Then he lay down for a much needed nap.

Later, George received his wake up call feeling refreshed from his nap and excited to experience his first, authentic Singapore Sling. He had made a reservation for 12:30 p.m. When he arrived, the bar was already full and there was a line of people waiting for a spot. After checking in with the host, he was escorted to the last available seat at the crowded bar, where he was greeted by a very friendly barman who presented him with a menu and a large bag of peanuts.

“Feel free to throw the shells on the floor. This is the only place in Singapore where littering is encouraged,” he explained. “I’ll be right back to get your order.”

When the barman returned he did not seem at all surprised when George ordered a Singapore Sling, since virtually everyone in the place was sipping on this signature cocktail. Feeling rather parched from the hot and humid climate, George took a long slug of the tall, frothy, pink concoction. He found it to be sweet and fruity yet strikingly refreshing, with a significant gin kick that paired well with the cherry brandy and fresh pineapple juice.

“So, what is the story behind Raffles and the Singapore Sling?” George inquired.

The barman smiled and began to recite his well-rehearsed spiel that he most likely recites countless times during the course of the day. “The Singapore Sling, which is widely considered our national drink, was created here at Raffles by lead bartender Ngiam Tong Boon in 1915,” he stated. “It is a gin-based drink that also includes pineapple and lime juices, along with Benedictine and Cointreau. The addition of cherry brandy gives it the telltale flavor and, along with grenadine syrup, its bright, rosy color.”

George ordered a second Sling and after the barman skillfully prepared it, as they do some 750 times a day, he continued to tell the story behind the Sling’s creation. “Following the turn of the 20th century, Raffles became the gathering spot in Singapore and the Long Bar was where the gentlemen would quench their thirst with spirituous drink. Unfortunately for the women of that era, it was seen as bad taste for them to drink alcohol in public and they were destined to knock back tea or fruit juices,” he continued. “Bartender Ngiam Tong Boon didn’t think it was fair for the ladies to suffer through the sweltering heat with just fruit juice, so he concocted the Singapore Sling. He gave the drink its illuminating pink glow and feminine feel, which led people to believe it was simply a fruity punch that was more than acceptable for ladies. And it worked!”

By now, George had finished his second Sling and realized that half a bag of peanuts, whose shells found their way to the floor around his stool, was not going to sustain him. So he thanked the barman for the informative history lesson, paid the check and inquired about a nearby restaurant that was casual and served great dim sum.

“Check out Din Tai Fong. It’s right across the street and they have fantastic dumplings!” he replied.

Leaving Raffles in the hot, muggy, late afternoon air and surrounded by palm fronds, George could almost picture gentlemen of the day in their casual white suits escorting ladies with their parasols and fans into the Long Bar for a cool, bracing Singapore Sling. 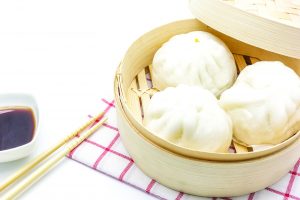 He found Din Tai Fong and after a short wait, was seated and served an ice cold Tiger beer. He ordered crab & pork dumplings, chili crab & pork buns, deep fried vegetable & pork wontons, and their famous xiao long baos (steamed pork dumplings). After a couple more cold Tiger beers and the wonderful dumplings, the jet lag finally caught up to George. Tomorrow was to be an early day, so he paid his check and returned to Raffles, to call it a day.

The next morning he checked out and hailed a cab for the harbor where he would board the beautiful Crystal Symphony for his cruise to Hong Kong. Once on board and seated at the bar inside the Crystal Cove, he just happened to notice that the drink of the day was a Singapore Sling.

“I’ll have a Singapore Sling, please,” he ordered. He found it to be very fresh, complex and balanced, and not nearly as sweet or fruity as the ones he’d had at Raffles.

“Is this the same recipe they serve at Raffles?” he inquired.

“Pretty much,” the bartender answered. “We use Tony Abou-Ganim’s recipe, which contains more gin and Angostura bitters, but less pineapple juice and no grenadine syrup.”

George liked this version as well, although he thought there would never be any way to substitute the experience of drinking a Singapore Sling at Raffles, but the Crystal Symphony does come close. 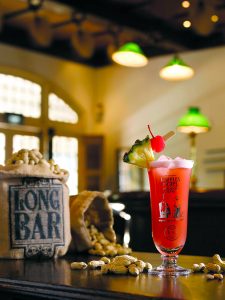 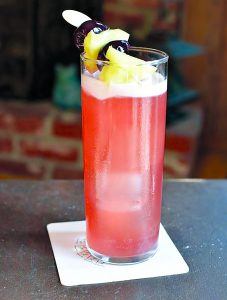