George was excited to be returning to Las Vegas for a convention, as this would give him an opportunity to visit Libertine Social again. It had been highly recommended to him on his trip last summer. He had very much enjoyed the cocktails and chef McClain’s wonderful food, but most of all, he’d enjoyed the wonderful hospitality of the staff. The venue had just recently opened during his previous trip and he was very curious to see how things had transformed since his last visit. After checking in at the Delano and a quick shower, George was more than ready for a stiff drink after his journey. He made the short walk from the elevator to the restaurant and was greeted by the welcoming hostess.

“Good evening. A table for one tonight?” she asked.

“Good evening to you. I believe I’ll dine at the bar this evening,” he replied.

She smiled and led him into the lounge area where he found a seat at the long, inviting bar. The bartender welcomed him with a glass of purified water and a cocktail menu.

“Wow, yes – that’s amazing! I apologize but I don’t recall your name,” he responded.

“No worries, my friend. It’s Derek. Nice to see you and welcome back. Will you be joining us for dinner tonight or just cocktails?” he asked.

“Thank you, Derek. Dinner for sure but first I need a stiff drink. What do you recommend?” George asked.

“Well, if you like Cognac and Rye Whiskey, we just dumped a batch of Vieux Carré that we barrel-aged for five weeks,” Derek replied. “They’re fantastic!”

“I’m a big fan of Cognac and Rye but I’m not familiar with the Vieux Carré, so I think I should try one,” George replied.

As Derek prepared his cocktail, George perused the dinner menu and settled on an order of Scotch olives and the creamy garlic hummus, followed by the Libertine Burger.

“So what do you think of the Vieux Carré?” Derek asked.

George found the drink to be robust, complex and incredibly well balanced, with the Benedictine and Cinzano 1757 softening the spice and power of the Wild Turkey 101 Rye Whiskey. It also proved to be the perfect complement to the Scotch olives and the hummus. “Delicious!” he answered.

“Along with the Sazerac, this is perhaps New Orleans’ greatest contribution to cocktail culture,” Derek enlightened. “I’m headed to NOLA on Monday for Tales of the Cocktail and plan to visit the Hotel Monteleone where the Vieux Carré was invented.”

“Tales of the Cocktail – what in the world is that?” George inquired.

“It is the world’s premier cocktail festival, held in New Orleans each year, that brings together bartenders and drinks enthusiasts to celebrate the cocktail,” he answered. “You should check it out!”

As George enjoyed his second barrel-aged Vieux Carré accompanying his two patties of ground beef perfectly cooked on the flat top with gooey house-made cheese, caramelized onions and bordelaise sauce, he contemplated the idea of attending Tales of the Cocktail. By the time he finished the last delectable bite his mind was made up! “Thank you for the great cocktails and a wonderful meal Derek. Perhaps I’ll see you in New Orleans!” George said, as he paid his check.

“If you do go to Tales, in addition to the Carousel Bar at the Hotel Monteleone you must stop by the Sazerac Bar at the Roosevelt Hotel for their namesake cocktail, which just happens to be the official cocktail of New Orleans,” Derek added, as he said his goodbyes. 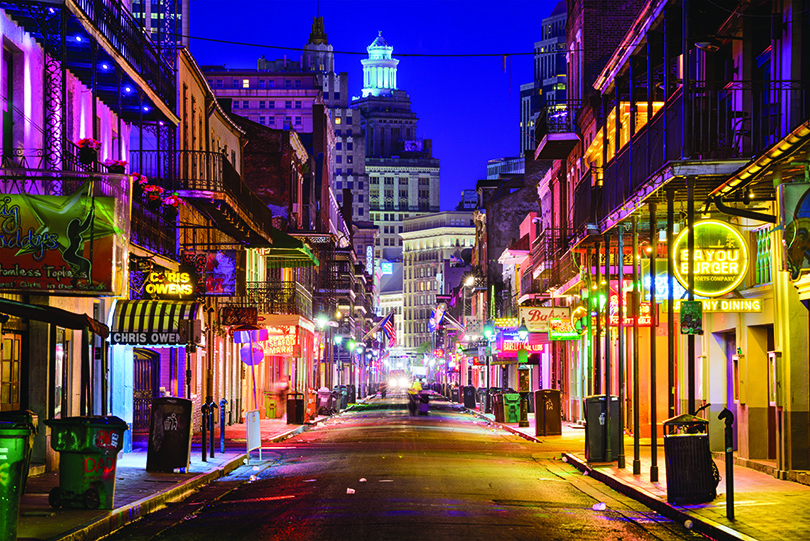 George arrived in New Orleans and, unable to book a room at the Hotel Monteleone, he took Derek’s recommendation and secured a suite at the Roosevelt. After checking in, he headed directly to the Sazerac Bar for a much-anticipated cocktail.

George walked into the Sazerac Bar and was immediately taken by the classic art deco style of the joint, the chandeliers and the wall-length Paul Ninas murals. The room had a certain elegance and George felt he would not be out of place wearing a zoot suit and a fedora. He was greeted by an extremely welcoming barman who presented a menu, a glass of water and some bar snacks.

“Do you need a minute or do you know what you’d like?” he inquired.

“Well, I think I should have the specialty of the house,” George replied.

“So that’d be either a Sazerac or a Ramos Fizz,” the barman replied. “The bar was named after the Sazerac and it’s the official cocktail of New Orleans, but the hotel trademarked the Ramos Fizz in 1894, and it was Governor Huey Long’s favorite drink.”

“They both sound great but I’ll have a Sazerac, please,” George ordered.

George lifted his glass and was met with aromas of anise and citrus mingled with black pepper, clove and vanilla. As he tasted the Sazerac, he found the Rye Whiskey to be powerful with notes of spice, and licorice tempered by a citrus sweetness and a touch of bitterness. What a wonderful, yet uniquely different libation, with layers of flavor and complexity. “Fantastic!” George replied when the barman inquired how it was. “Next I need to try a Vieux Carré.”

“Well, I’m happy to make you one but if you really want to learn about that drink you should have one at the Hotel Monteleone, where the drink was invented,” the barman countered.

“Great idea! Thank you. I’ll be back for one of your Ramos Fizzes later,” George answered, paying his check.

“Make sure you say ‘Hi’ to Marvin,” the barman said, as George said his goodbyes. 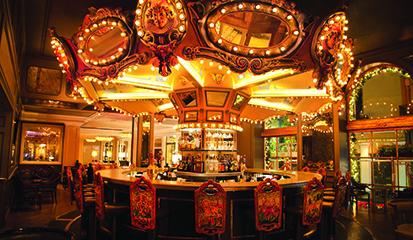 George made his way to the Hotel Monteleone and walked immediately into the throes of a Tales of the Cocktail reception. He could tell instantly that the hotel must be ground zero for this massive bartending celebration. Making his way through the crowd, he found the entrance to the equally packed Carousel Bar, which features a whimsical circus merry-go-round that actually revolves. Finding the last open seat at the bar as it slowly passed by, he jumped on for the slow ride that apparently makes a complete revolution every 15 minutes. He was immediately greeted by a very busy bartender.

“By any chance, are you Marvin?” George inquired.

“Indeed I am. What can I get for you?” Marvin answered.

“I’m here for a Vieux Carré,” he replied.

While Marvin prepared his drink, George took in the sights of the bar. In addition to the many bartenders congregating at the Carousel and mingling with locals and cocktail fanatics from all over the world, he could not help but admire the bar itself. Jazz-era portraits by Alfred Cheney adorn the walls alongside Ziegfeld Follies icons from the 1920s and ‘30s.

“The Vieux Carré was created in 1938 or 1939 – no one is quite sure which year – by Walter Bergeron, who was the lead bartender here at the Monteleone. It was forgotten for a while but has returned in the last 15–20 years with a vengeance. As the folklore goes, he created it as a tribute to the different ethnic groups of the French Quarter – the French with the Benedictine and Cognac, the Americans with the Rye Whiskey, the Italians with the Sweet Vermouth, and the Islanders of the Caribbean with the bitters,” Marvin explained. “It was originated to pay tribute to the French Quarter of New Orleans, known as the Vieux Carré. I think that it was probably a riff on the Sazerac, which was a well-known cocktail at the time.”

George could see how busy Marvin was and how crazy the spinning Carousel Bar had become, so he quickly finished his Vieux Carré, paid his check and thanked his host. Then he started for the door to join the masses of bartenders who had descended on this amazing city to experience its history, culture and love of cocktails. Just then he felt a hand on his shoulder – it was Marvin, and he handed George a folded cocktail napkin.

“I wrote down my recipe for the Vieux Carré so you can make them at home,” he said, smiling, and then jumped back behind the busy bar.

Now that is truly the art of hospitality, George thought as he went in search of a plate of oysters, a shrimp Po Boy and a cold Abita beer.

Build in a rocks glass filled with ice, in the order given from top to bottom. Give a quick stir just to mix and garnish with a twist of fresh lemon.

I like the Bulliet Rye, Ferrand 1840 Cognac. We use Martini and Rossi for the Sweet Vermouth. 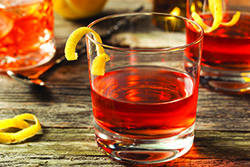 Empty the ice from the first glass and coat the glass with the Herbsaint, then discard the remaining Herbsaint. Strain the whiskey/bitters/sugar mixture from the second glass into the Herbsaint-prepared glass and garnish with lemon peel.