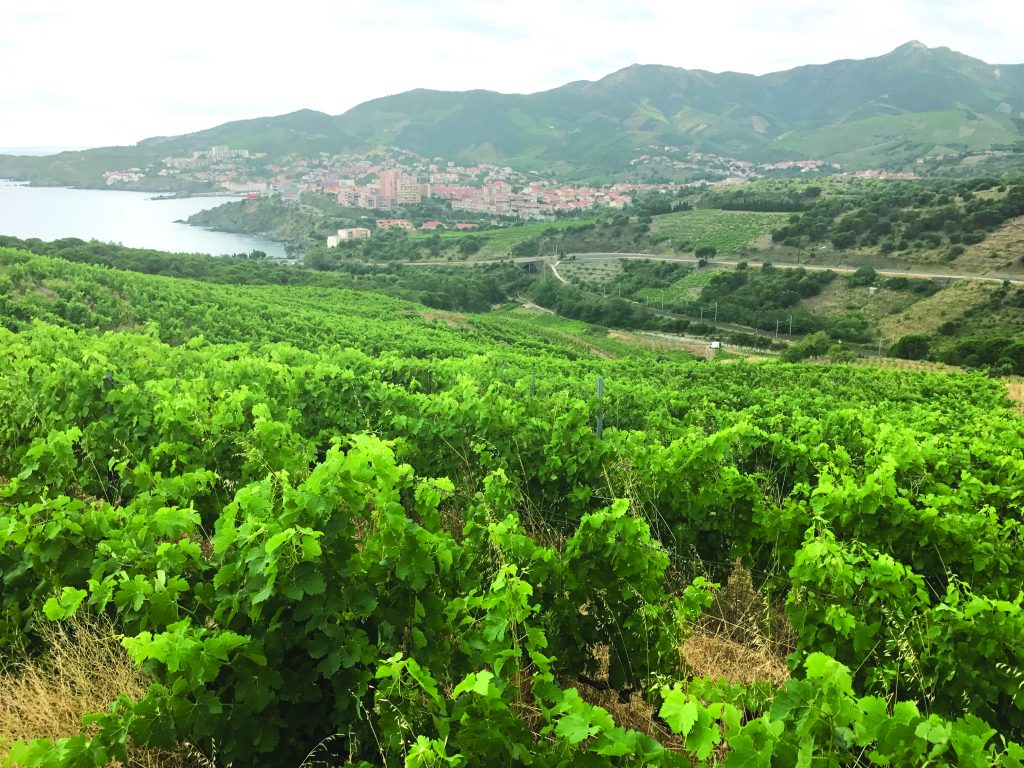 A recent trip to Roussillon opened my eyes to a region that has traditionally been lumped together with Languedoc. This misleading combination resulted in Roussillon’s special characteristics being camouflaged by its much larger and more prolific northern partner. To begin with, Roussillon’s history has much more in common with its western Spanish neighbor of Catalunya, because of their shared kingdom for many centuries in the Middle Ages when ruled by the King of Majorca. It is culturally, linguistically, culinarily and viticulturally more similar to the Catalan, though it is definitely part of France’s Pyrénées-Orientales.

Roussillon has 28 centuries of viticultural history, having been first established by ancient Greeks and further developed by Etruscans and Romans. Its wine industry evolved from the development of the Canal du Midi in the 17th century, and later by the railway system that interconnected France and commerce in the 19th century. Roussillon represents only 2 percent of France’s wine production but 80 percent of France’s fortified Vins Doux Naturels (VDN). The latter is not surprising because the 1284 “invention” of mutage, or fortification of wine, is credited to Arnaud de Villeneuve, the rector of the nearby University of Montpelier, and doctor to the King of Majorca, whose court was located in Roussillon’s capital city of Perpignan.

Roussillon is located in the southern-most part of France bordering Spain. Its amphitheater-like shape is ringed by the Pyrenees with the dominant Canigou Mountain to the west, the Albères Mountains to the south, the Corbières Mountains to the north separating it from Languedoc, and finally, the Mediterranean Sea to the east. These mountains impact the climate of Roussillon with seven differently named winds, the most significant being the Tramontane, which, like the Mistral in the Rhône Valley, reduces the impact of fungal and insect pressure on vineyards. It is the main reason that Roussillon has the highest percentage of organic and biodynamic vineyards in France. It has three major valleys formed by the Agly, Têt and Tech rivers, where many vineyards and fruit orchards are found. However, more than 80 percent of 52,880 acres of vineyards lie on slopes reaching 2,100 feet in elevation. The geological impact of mountains and uplift has resulted in the greatest diversity of soils dominated by schistous clay with calcareous limestone and gravel.

Although Roussillon is small in size, its dominant geographic features result in many diverse terroirs, which are reflected by its 17 Appellations d’ Origine Protegées (AOPs) and IGPs, amounting to 16 million gallons. The vineyards are, for the most part, small family holdings of fewer than 24 acres. The 2,200 family growers combine their resources so that 75 percent of total wine production is made by 25 co-operatives. One of the more recent changes is not only the increased determination by young winemakers to produce their own wines, but also the investments by foreigners such as David Phinney of Napa fame with his Department 66, so that there are now over 350 independent wineries. There is also an infusion of the latest natural winemaking techniques such as what we witnessed at Château de L’Ou, where small ovoid shaped fermenters and hand pigéage, or punch down techniques, were employed.

In a region this small, it was somewhat surprising to discover such a wide range of styles of wines. There are 24 varieties and one of the more significant discoveries I made was just how delicious the whites made from Grenache Blanc, Grenache Gris and Macabeu can be. Examples included Collioure Blanc Les Toiles Fauves and Domaine de la Rectoire’s Les Argyles. Occasionally, Grenache Blanc is blended with Vermentino. Château de l’Ou wines, made by the stylish Séverine Bourrier, and Imprint du Temps Grenache Blanc or Grenache Gris made by Ferrer Ribière, a small organic and biodynamic producer, are other superb examples.

In addition to the delicious whites, Roussillon is better known for its very low-yielding Grenache Noir, Carignan, Mourvèdre and Syrah. Roussillon has the lowest yields of any wine region of France, the average being less than half other French AOPs. This is a result of vineyards being planted on very schistous and granitic rocky slopes, the dry sunny growing season, the age of vines and the lack of irrigation. 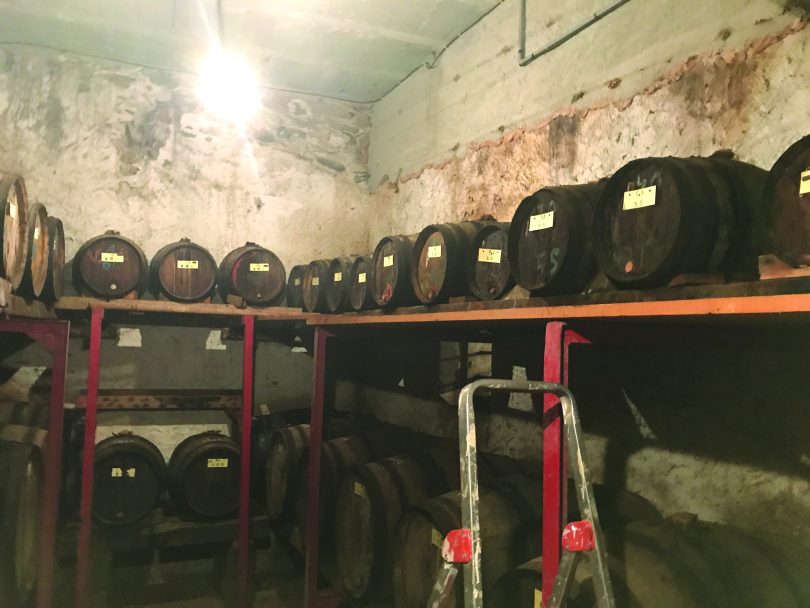 Domaine de Rancy in the aging cellars with vintages in barrels going back to 1909. 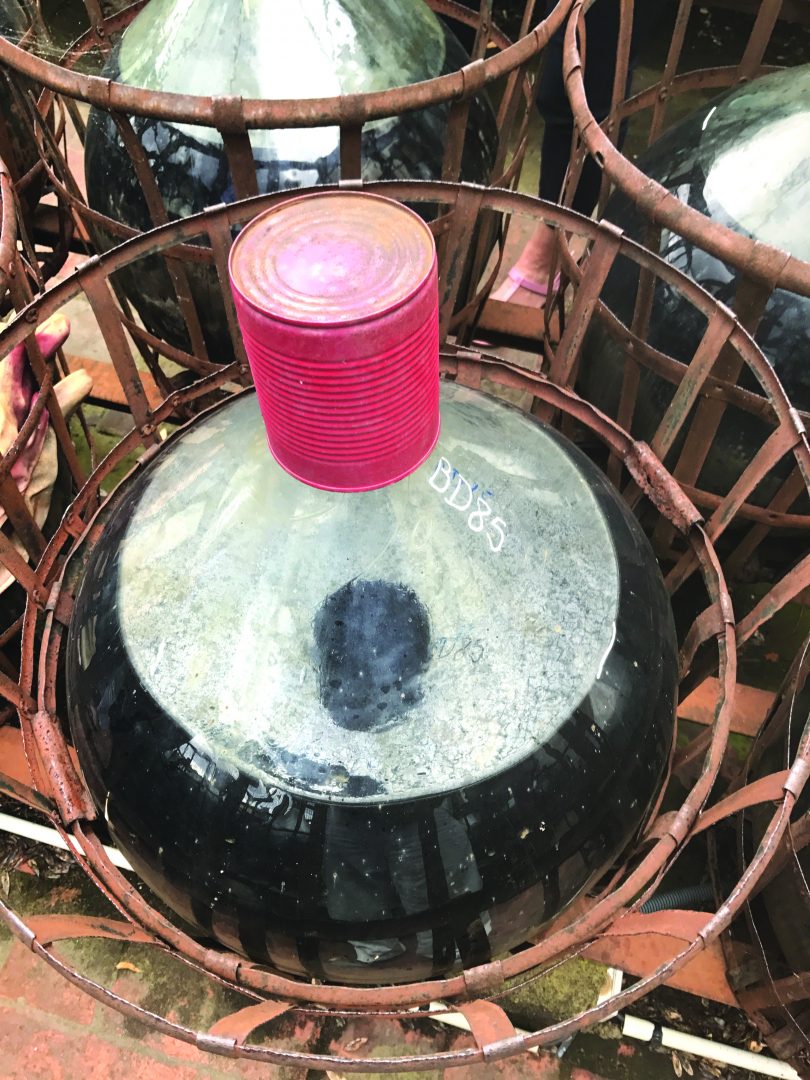 Banyuls resting in demijohns (bonbonnes) to allow them to oxidize. They remain in these for 12 months.

Banyuls resting in demijohns (bonbonnes) to allow them to oxidize. They remain in these for 12 months. 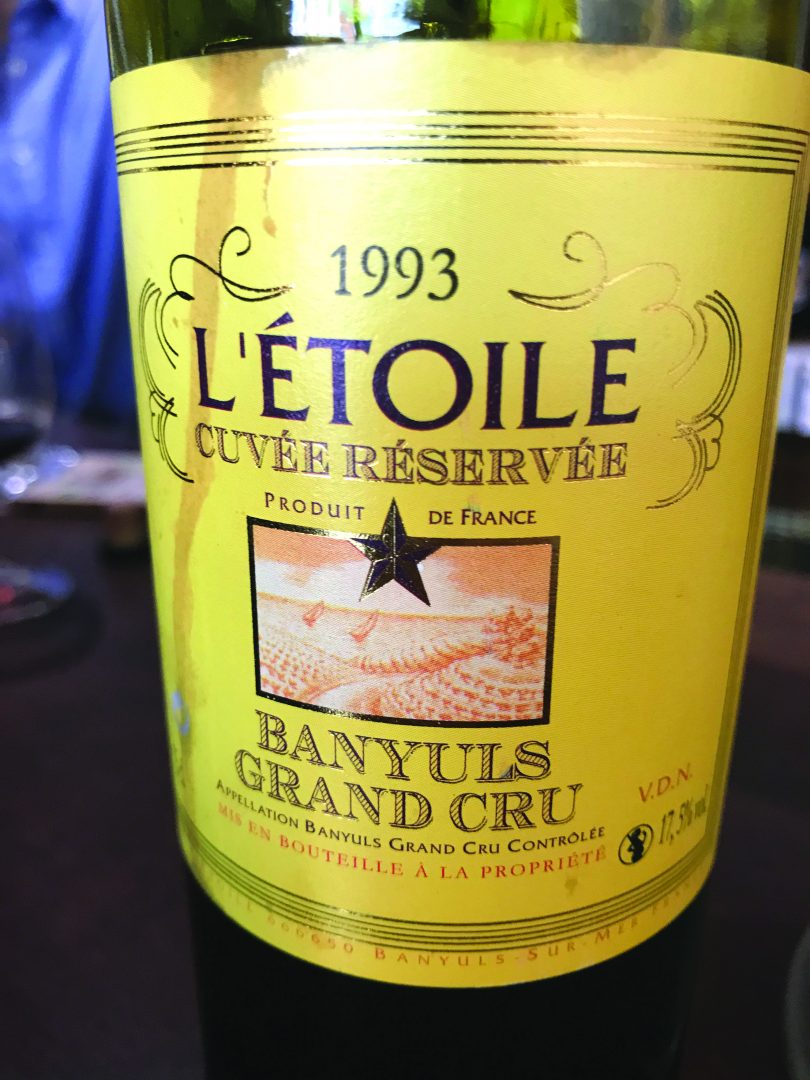 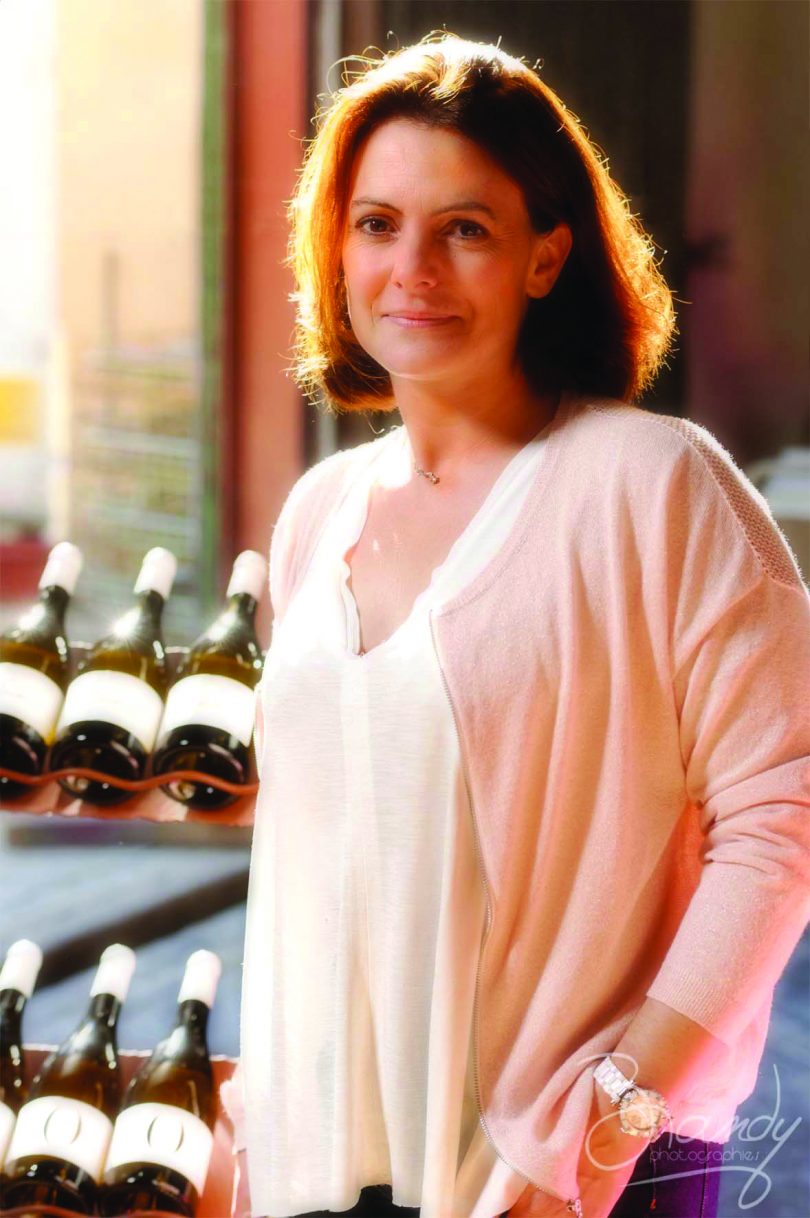 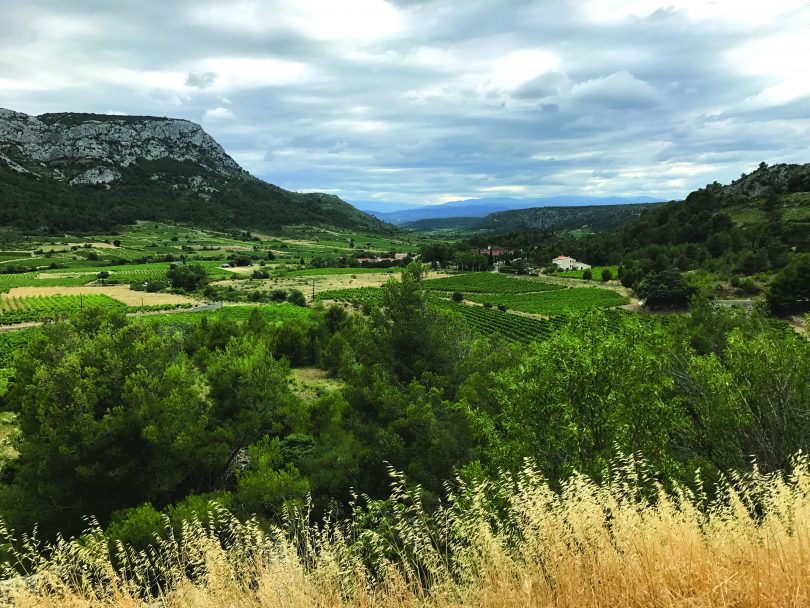 Vineyards in Tautavel, northern Roussillon. Tautavel is a village of some 800 inhabitants in the Roussillon.

The reds not only have great balance and distinct varietal characteristics but also have the aromas of the garrigue. “Garrigue” is the French word for the scrubland one finds in southern France, which is comprised of different wild growing plants, herbs and flowers. Particularly widespread are wild fennel, wild thyme, rosemary, cistus or rockrose, lavender and olive trees. One smells these aromas in the air, and their volatile aromatic compounds attach themselves to the skins of maturing grapes, lending added aromatic complexity to the wines and giving them a greater sense of place. While we prized very many delicious Grenache red and rosé wines, for me the Carignan Noir wines were most revelatory. Normally associated with being very tannic and lacking defined fruit character, the wines based or blended with Carignan, instead, had deep violet floral notes and intense black fruit flavors with rounded spicy tannins. Examples included Ferrer Ribière’s Carignan Noir 2014 from 140-year-old vines, and Roc des Anges’ Relief 2014 from the Côtes de Roussillon and Côtes de Roussillon Villages. Some outstanding blends of Grenache Noir, its clone of Lladoner Pelut, Carignan and Syrah include Domaine des Schistes Côtes de Roussillon La Coumeille, which is available in the U.S.

What differentiates Roussillon from all other French regions is its tradition and variety of Vins Doux Naturels, which as noted, began in the mid-13th century. The tradition has resulted in five different VDN appellations and two broadly defined styles of a fresh non-oxidative style and an oxidative style. The appellations include Rivesaltes, Maury, Banyuls, all in oxidative and non-oxidative styles, and Banyuls Grand Cru and finally, Muscat de Rivesaltes. The wines are fortified with very high, 97 percent pure ethanol made from grape distillate, which is added in smaller quantities than in similar fortified wines such as Port or Madeira. The delightfully aromatic non-oxidative or fresh Muscat de Rivesaltes are both a perfect accompaniment to many cheeses or desserts, and provide intensity and freshness. Grenat-style wines are Grenache Noir-based fortified wines from Rivesaltes and Maury; in Banyuls, they are referred to as Rimage. They are young, non-oxidized and are lighter than Port wines but a perfect accompaniment for chocolate, desserts with dried fruits, and cheeses, particularly blue cheeses.

Oxidized and rancio-styled wines are some of the most miraculous wines made anywhere. The old cellars filled with large to small barrels that are countless decades old allow wines to magically be transformed by time, temperature and humidity. We were privileged to visit Domaine de Rancy in the village of Latour de France, whose specialty is to produce dry rancio styles of wines and the more prevalent sweet Ambré wines of Rivesaltes. We tasted wines including the 1948 that had aged in barrel up to 65 years, though we were not fortunate enough to taste the 1909 vintage that was still in a small barrel. To convey a semblance of the experience, I’d say I found almost indescribable complexity in this dark mahogany-colored elixir. While there was slight sweetness, it was so balanced by the acidity and other components that one didn’t realize there was residual sugar. There were dried fruit notes of figs, coffee, cocoa, tobacco, leather, nuts, marmite, spices and, no matter the vintage tasted, always an orange peel note to the finish. You needn’t go to the extreme of purchasing such an old vintage (not that they are so expensive) because one derives many of the same aromatic and taste qualities from 20-year-old Ambré wines that are absurdly inexpensive, given their pedigree.

Banyuls Grand Cru wines are another treasure from this region. The beautiful vineyards located on steep schistous slopes facing the Mediterranean offer the potential for making these wines special, not that I didn’t very much appreciate many of the Grenache-based dry white and red wines that are sold under the appellation of Collioure. The Rimage non-oxidative style of wines made primarily from Grenache Noir and Carignan had deep concentrated black fruit aromas of plum, blackberries and cinnamon spice, with a long persistent finish. The oxidized style of tuilé (tawny) colored style had more pomegranate and nutty aromas with cocoa and coffee notes.

The L’Etoile co-op was first formed in 1921; its wines represent 100 growers and 260 acres of vineyards. The fully oxidized Banyuls Grand Cru is aged in demi-muids (600-liter wooden vats). The wines may be blended with other wines from the same vintage that were purposefully aged in clear glass bonbonnes, or demijohns, and have been exposed to all the elements such as the heat of the sun, rain or cold weather, for 12 months or more. The resulting wines, after undergoing oxidative aging for years and decades, become complex while retaining freshness. For example, the L’Etoile Banyuls Grand Cru 1993 had a slight tawny hue with dried fruit notes of figs, black cherries and dates, cinnamon, cardamom, cocoa and tobacco. This style of wine is absurdly inexpensive and provides potential customers with a unique experience. There are many readily available oxidative-style wines from Roussillon that are decades old, and who isn’t intrigued to taste a wine older than one’s self? And to find such readily available wines at very affordable prices makes it potentially an unforgettable experience for one’s clientele.

For those wanting a touch of history, and to experience the product of man’s indomitable will to contour nature in order to provide deliciously elegant dry white, rosé, red or lightly fortified dry or sweet wines unique to a region – then, there are no better options than the wines of Roussillon.