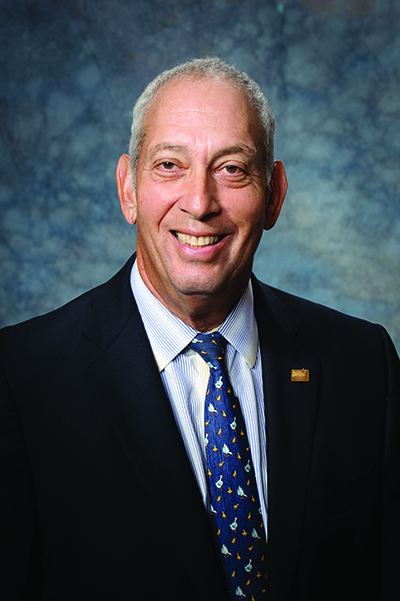 Laddie Weiss
Co-Founder and Event Director of the VIBE Conference

The mission of the annual VIBE Conference is to provide current, actionable and pertinent education to beverage executives, which enables these multi-unit operators to produce a cutting edge beverage program for their concepts. Vibe conference is the #1 education program for onpremise beverage decision makers!

ITM: Laddie, how many years has VIBE (Very Important Business Executives) been in existence?

Laddie: 2018 will be year number nine. The first six were in Las Vegas and in 2018, we will return to the Sheraton in San Diego the 26th through the 28th of February.

ITM: Why did you move from Las Vegas?

LW: It was time for a change and there was a need to improve the quality of networking.

LW: Based on our Survey Monkey questionnaire, which approximately 300 attendees submitted, the metrics were strong and the program was highly rated. We had a record 750 in attendance, which was an all time high.

ITM: Can you talk about the program planning and development process for VIBE?

LW: First, VIBE is a team effort. I am the Director and have responsibility for the program. Donna Bruns in Operations handles most of the sponsorships and interfaces with the hotel, and with David Commer and Barbara Akin of Commer Beverage, who produce the evening’s cocktail events. The details to make things happen are summarized in a portfolio of Excel spreadsheets. Just coordinating, determining and receiving product from our supplier sponsors is a major task. Hotel details are equally as complex, as well as dealing with a host of outside vendors. Charlie Forman works with Donna on sponsorships.

Michelle Osborne is responsible for marketing. Andrea Floyd works with Michelle and is responsible for the VIBE Vista Awards; she provides support to Edward Korry and his team of 12 at Johnson & Wales University, who determine the finalists and winners. Kirsten Lewis and her team handle administration including the hotel selection, room reservations, registration, etc.

The starting point each year is a thorough review of our event survey, handled by Survey Monkey, which is a detailed questionnaire filled out by approximately 300 attendees. In addition to the average rating numbers, all verbatim comments are read and categorized. It is our experience that attendees who take the time to explain their answers need to be given extra weight. In addition to Survey Monkey, there is a conference app used to evaluate the 16 workshops. We separate the two surveys; otherwise, it would take too long to fill out if all the workshops were included in both.

ITM: What is their mission?

LW: Ten percent is to review by exception the current conference with emphasis on items that need to be improved. Ninety percent is on the next year’s conference.

ITM: Who is on the board?

LW: There are approximately 40 members: 25 operators, four Pinnacle Sponsors, three agency partners and eight consultants, including our research partners. This is an active board; a normal attendance is about 30.

ITM: Can you explain what takes place in the board meetings?

LW: I am the chair of the meeting, which is broken up into four segments – each segment is approximately two hours with a 30-minute break between segments 1 and 2, and 3 and 4. In addition to the opening discussion about the current conference, the balance of the agenda is broken up into 10 general subjects like beer, wine and spirits. Each subject is allocated 30 minutes and the discussion leader is one of the VAC members. At the meeting, Michelle and Andrea take notes, which are distributed several days after the meeting.

ITM: What takes place after the VAC meeting?

LW: I condense the notes and prepare a first draft of the 2018 program. Following the meeting, I speak with some of the discussion leaders to drill down deeper into subjects that were discussed that are of interest to VIBE attendees. Based on those discussions, a second program draft is prepared and the process of finalizing the agenda subjects takes place. Concurrently, some of the speakers are invited. Generally, all general session and workshop speakers are confirmed on or about July 15. Where panelists are involved, that takes an additional month.

ITM: What are the speakers’ responsibilities?

LW: First is to prepare a title and brief description for the program, which is due by August 1; second revisions are due by October 1; and then their speaker outline the first week of December. They also have to submit a copy of the PowerPoint that will be posted on our website after the conference ends. Attendees receive a password, after they fill out the Survey Monkey, that allows them to obtain the speakers’ presentations.

ITM: Who handles the audio/visual needs?

LW: Bruce Hadley of Hadley Creative Services and Craig Jakubs of Show Doctor handle the A/V support for the educational program and awards presentations. Bruce and Craig have been with us since the beginning.

ITM: Next, let’s talk about sponsorships.

LW: The planning document for sponsorships is called “Sponsorship Fee & Benefits.” Donna Bruns and I review the numbers from the previous year and in most years, there may be a few minor modifications. Last year was the first time in over five years that we took a modest increase. There is no plan for an increase in basic sponsorships this year. Once Donna Bruns and I agree on the fee structure, she prepares the proposal for the various sponsorship levels. That process is completed in late July. Renewals are sent out late summer.

ITM: What about new sponsors?

LW: Charlie Forman handles new sponsors or prospects. Suffice it to say that, before we get into full swing with prospects, Donna needs to have an idea of the number of non-renewals, which is usually a low percentage. Based on last year’s ratio of operators-to-sponsors, we will only be able to replace non-renewals.

ITM: How do you handle the marketing?

LW: Michelle and Andrea handle the very important marketing function. The process starts prior to the VAC meeting, when the team meets at Questex to review the current year’s conference that concluded about a month ago. A general discussion takes place regarding all aspects of the marketing timeline. Michelle prepares a detailed timeline in late June-early July, for Team VIBE to approve. Sometimes a few edits are required prior to finalizing. Michelle and Andrea work with our three agency partners to develop and execute the marketing support. Our long time agency partners are IMI Agency, MarkeTeam and Patrick Henry Creative Promotions.

ITM: What awards do you present?

LW: We have two award programs: the VIBE Vista Awards for operators and Supplier Awards for the suppliers.

ITM: Can you give us some details about the VIBE Vista Awards?

LW: The operators and suppliers – but mostly the agencies – submit nominations for these awards. Johnson & Wales University (JWU) faculty and alumni judge the finalists and winners. In previous years we had 18 award categories, which included separate categories for chain restaurants and hotels. However, because some of the categories were slim-to-none on nominations, we have decided to combine the award categories for hotels and restaurants, with the exception of “Best Overall Adult Beverage Program.” In addition, two individual awards will be added, for “Innovator” and “Legend.” Details will be forthcoming on that.

ITM: How about the “Supplier of the Year” award – how is that handled?

LW: Only chain hotel and restaurant operators are eligible to vote and Technomic handles the voting process. There are awards for best beer, spirit, wine and alcohol-free categories – in small, medium and large companies.

ITM: We look forward to another great conference in 2018.

LW: Thanks. See you there.