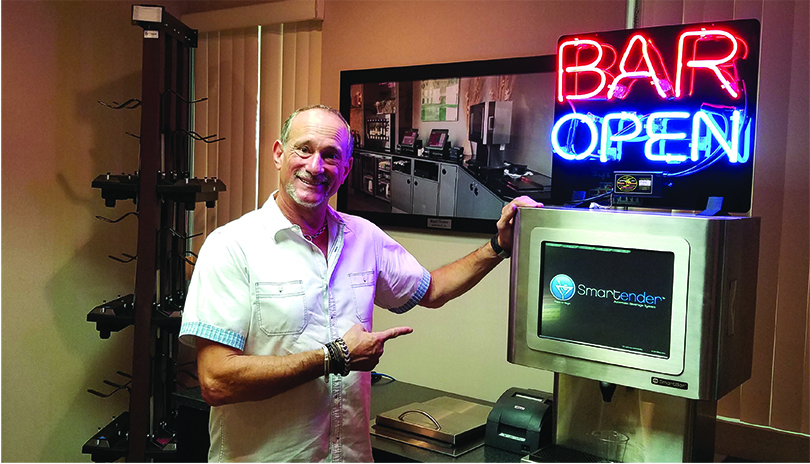 Smart Bar USA manufactures and distributes a patented automated cocktail dispensing machine, the SmarTender. There is a portable, fully self-contained version as well as a modular, fixed installed machine. Neither system requires any bartending experience. More than six hundred types of drinks can be made at the push of a button. All Smart Bar products are made in the USA. The company was launched in 2012. Today, the company has installations all over the U.S.

ITM 1: Are the units easy for the operators to use? Do you help train them?

Barry: The whole purpose of the proprietary software inside the SmarTender is to make the machine user friendly and simple to operate. The primary users of the SmarTender are cocktail servers and waiters/waitresses. If you can read the name of a drink and press a button, you can operate the machine. When your SmarTender is delivered, it includes full training on the machine’s capabilities and use.

ITM 2: The portable unit must have a lot of applications. How are your portable units being used in the real world?

Barry: Today we have installations in movie theaters all over the U.S., including many Regal Cinemas. We have installed numerous units in hotel casino gaming properties (both American Indian gaming and non-American Indian gaming). The SmarTenders are deployed at service bars, pool cabanas, theaters and restaurants. We have also placed our SmarTenders in private suites at major stadiums including those for the Cleveland Indians and Minnesota Twins. Cruise lines are currently looking into using our machines as well. Portable SmarTenders are also currently utilized in banquet and catering halls. Really, anywhere you would like to serve a cocktail, you can place a full service SmarTender quickly and efficiently.

ITM 3: The SmarTender must have a lot of advantages for bars. What are those advantages?

Barry: First of all, both the portable and modular SmarTender units fully mix hundreds of cocktails and can be programed to a customer’s own recipes, allowing for crafted cocktails as well. The SmarTender does not need an experienced bartender – the servers prepare the cocktail and serve the customer without the necessity of any interaction with a bartender. The SmarTender is placed in a service bar area either in front of the house (end of the bar), or in a back-of-house service bar area utilized by servers. The order is placed into the customer’s POS (we integrate with most POS systems) and the SmarTender prepares the drink for the server upon demand. The portable SmarTender has the whole bar stored in its on-board computer, and it currently utilizes 16 liquors, 12 mixers (bag in a box), water and CO2. It also takes care of waste and includes an ice bin and carbonator. Just plug it in and press a button. The modular SmarTender can be mounted on a bar top in the service area and connected to an existing bag in a box and CO2 that is normally provided by Coke or Pepsi. A liquor drawer is installed under the counter or close by, housing the 16 different liquors. Our modular units also fully integrate with both Berg and Easy Bar pump room installations, which are normally found in many hotel casinos.

ITM 4: Tell us what the software on the machine can do.

Barry: The proprietary software installed into our dispensing head is very sophisticated and does many things. The SmarTender has a built-in, on-board POS for systems that do not wish to integrate into their own systems. This is useful for portable units in catering or remote locations. The software mixes and dispenses BOTH the liquor and the mixer, per the user-programed recipes, while dispensing the drink into the customer’s glass. The software also prevents unauthorized use by automatically locking the system after each user’s order is complete. Each user is provided an access code or employee swipe card, and all drinks prepared by that access code are stored and recorded in the on-board management screen.

Management can have remote access to see how many drinks are being served and by whom. There is a portion control screen allowing management to adjust portions of liquor (shot, or shot and a half) in 1/10 portions. The SmarTender can also be a self-serve soda machine, as the software allows for the liquor drinks to be locked out. It really is an amazing product and can’t be fully appreciated until you actually see one in action.

ITM: How does using a SmarTender improve operations in service and in the bottom line – earnings?

Barry: The SmarTender will not replace a bartender who serves those customers seated at the bar; that is part of the relationship a proprietor has with a customer. There are many applications where a customer orders a drink and never sees it made by a bartender. In these cases, a service bar is utilized and a “service” bartender prepares drinks for servers. SmarTender can eliminate the need for that extra bartender, thereby affecting labor costs. The servers do not share their tips with a service bartender because there isn’t one – this makes the servers happy. The customer gets their drink faster (keeping the customer happy and more drinks sold) because the server is in control and not dependent on a service bartender. All drinks are made the exact same way every time, as the same recipe is being followed for every single drink. Studies have shown that the average drink manually poured might tend to be off by 1/8 of an ounce, resulting in inconsistent drink flavor and expensive, wasteful use of alcohol. Fewer mistakes save money and deliver a drink made exactly to the recipe every time. Lower labor costs, less waste from over-pours and mistakes, happy employees, happy customers – all make happy owners with better margins.