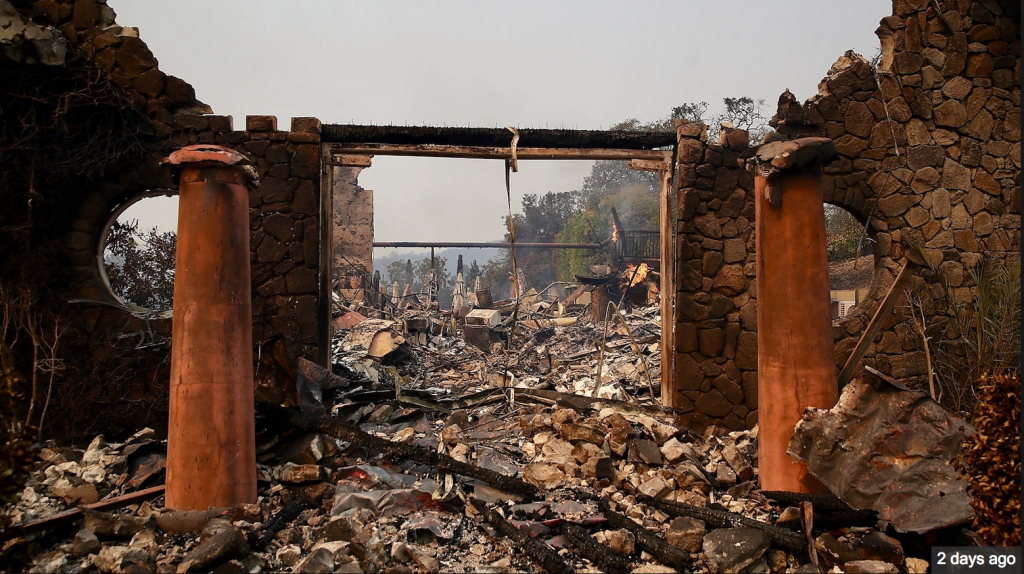 Photo by: Justin Sullivan/Getty Images • Signorello Estate Winery in the aftermath of the blaze.

As fires continue to burn throughout much of Northern California, reports are surfacing more regularly about the fates of wineries throughout Napa, Sonoma and Mendocino counties. Here is what we know so far about those damaged or destroyed (and we are including only those for which we have confirmation from the wineries themselves or our reporters on the ground):

Helena View Johnston Vineyards, 3500 CA-128, Calistoga: According to the owner’s brother, this organic winery burned to the ground early Monday morning and “all is lost.”

Robert Sinskey Vineyards, 6320 Silverado Trail, Napa: Only some vegetation around the winery had burned by Tuesday.

Signorello Estate Vineyards, 4500 Silverado Trail, Napa: The winery and residence in the Stag’s Leap District burned to the ground Monday. According to spokesperson Charlotte Milan, winery and vineyard employees fought the fire Sunday night into Monday morning but had to retreat when flames overcame the building. All 25 winery employees were safe and proprietor Ray Signorello says he will rebuild.

Stag’s Leap Winery, 6150 Silverado Trail, Napa: The main winery and tasting room in the Stag’s Leap District are intact, but some outer buildings on the property were lost.

VinRoc, 4069 Atlas Peak Road, Napa: Proprietor and winemaker Michael Parmenter had to evacuate late Sunday night and confirmed Tuesday that his Atlas Peak district winery and home were destroyed. “Total loss, everything gone except our (wine) cave,” he said.

White Rock Vineyards, 1115 Loma Vista Dr., Napa: Owned by the Vandendriessche family since 1870, the winery confirmed it was destroyed by the fire that ravaged nearby Soda Canyon Road.

Chateau St. Jean, 8555 Sonoma Highway, Kenwood: Despite early reports that the winery was destroyed, a drive-by Tuesday showed damage to some outbuilding and archway entries from the parking lot, but the main structure appeared unharmed. The main structure appeared unharmed. Blackened earth rimmed the property and billowing smoke still rose from the nearby hills as a helicopter dropped water on the flames.

Gundlach Bundschu Winery, 2000 Denmark St., Sonoma: Despite earlier reports of significant fire damage, the winery buildings are structurally sound, said Katie Bundschu. But the property was on the fire line so Bundschu said the family is still assessing crop damage.

Nicholson Ranch, 4200 Napa Road, Sonoma: A Facebook post on the winery page clarified that damage was not significant. “The winery was in the path of the fire but escaped being engulfed by the flames. We have some damage to fix,” the post read.

Paradise Ridge Winery, 4545 Thomas Lake Harris Drive, Santa Rosa: The winery was completely destroyed on Monday by the Tubbs Fire. The Byck family, which owns the winery, posted on their website that they will rebuild. “The winery may be broken but our estate vineyards survived, which is foundation of our wine.”

Frey Vineyards, 14000 Tomki Road, Redwood Valley: The country’s first organic and biodynamic winery was lost in the Redwood Fire and all wine orders have been suspended temporarily until the family can fully assess the loss.