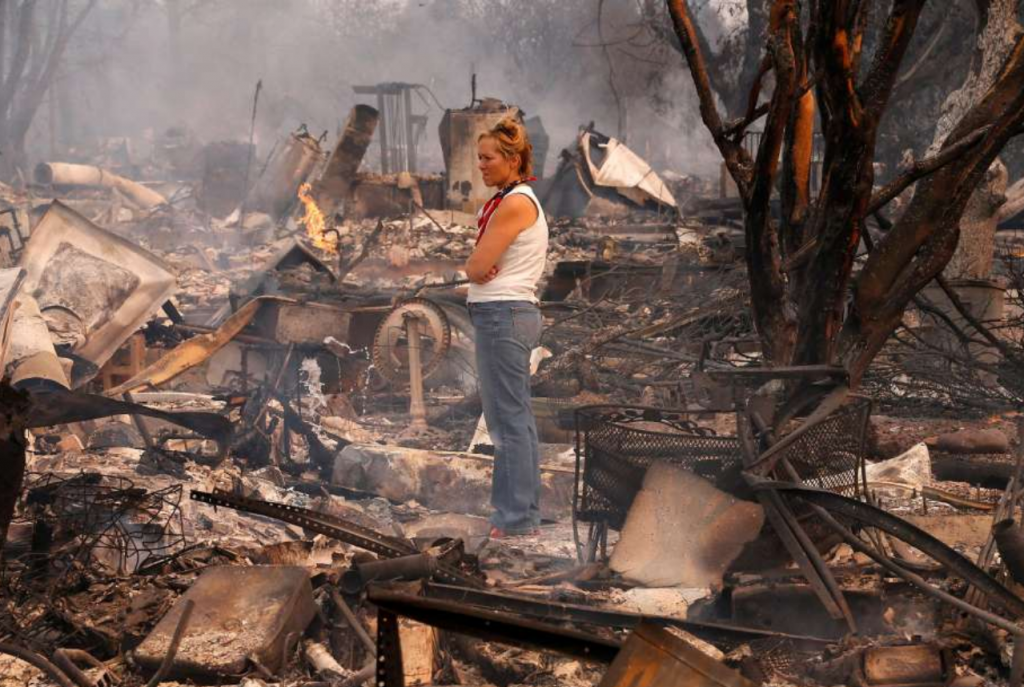 Photo: Michael Macor, The Chronicle • Terrie Burns stands in the middle of her destroyed at the scene of the Tubbs Fire in Santa Rosa, Ca., on Monday October 9, 2017.

California’s sun-tinged wine country is familiar with the life and death of the growing cycle, from green buds to purple grapes to dry, gnarled vines. But the fires sweeping through three wine-growing counties have shaken this cycle to a core, with possible repercussions for years to come.

As thousands of firefighters try to contain 10 Northern California blazes, vineyards in Napa, Sonoma and Mendocino counties are coming to grips with the damage and what they should do to rebuild – if they do.

“In terms of (future) production, a lot of people will have to rebuild and replant, so we’re bound to see a bit of a (grape) shortage,” says Mary McAuley, founder of Ripe Life Wines in Healdsburg, which buys its grapes from vineyards in nearby Mendocino County.

She counts herself lucky that her winery managed to miss the flames incinerating other parts of Sonoma County. The region’s fires, some of which were still uncontained Wednesday, have already claimed at least 21 lives and resulted in the destruction of 3,500 homes and businesses.

“I think, longer term, a lot of people are going to bring in more technologies to protect against earthquakes and fire damage now that they have to rebuild their facilities,” she said.

Some may even choose not to rebuild, she said. Wine industry experts say that even if a winery’s vineyards remain standing, they face steep challenges as their employees struggle with burned or damaged homes. The region counts wine and tourism as top employers, and many workers who pick grapes or work in hotels may be compelled to relocate after losing everything.

Napa and Sonoma counties are home to around 900 wineries (of 4,600 statewide), with most boutique businesses making higher-end wines. The two counties represent 13% of the state’s output. And the state itself supplies 85% of the nation’s wine production, making it the fourth-largest producer of wines after Italy, France and Spain.

Northern California wine country is laced with mountains and valleys that partly determined which neighborhoods and business got hit. A bigger factor were the winds, which whipped by at 60 miles per hour or more, sealing the fate of anyone in its path.

Katy Biller lives near B.R. Cohn winery in Glen Ellen, which is owned by Bruce Cohn, the manager of the hit ’70s group The Doobie Brothers. Biller could only watch as some structures nearby burned on Monday.

“We just sat and watched the flames from the road,” she said. “There was nothing we could do.”

The winery tweeted Tuesday that “Although it is still a very active fire scene in our area, B.R. Cohn is standing strong. Thanks for all the messages of concern and support.”

Several well known wineries, including Chateau Montelena and PlumpJack Winery, posted word to their Facebook pages that while power and accessibility were an issue, there was no damage to the properties.

“All the information we have is related to the health and safety of people, so we will wait to see how the vineyards have been impacted by the heat and the flames,” says Greg Clark, Napa County Agriculture Commissioner. “We’ll be working to assess the agricultural losses soon.”

The region’s growers may have timing on their side. By mid-October, many varieties of grape will have already been harvested, with specific varieties such as cabernet perhaps remaining on the vines. But any grapes that were harvested and not yet shipped to other winemakers could have been lost.

As for future harvest impact, some experts note that one repercussion of the fire could be a smokey or charred taste to subsequent wines.

Chateau St. Jean posted a note on its website saying it was closed due to the fires. The hillside near Hamel Family Wines, which is located in the Sonoma hills, was spotted burning by area neighbors. Signorello Estates sustained damage to its buildings but the owner told ABC7 most of its grapes were already picked.

Paradise Ridge posted on its website saying “The Byck family and Paradise Ridge team is heartbroken by the loss of our winery this morning in the Tubbs Fire, which has devastated our corner of Sonoma County.”

The note added: “The winery may be broken but our estate vineyards survived, which is foundation of our wine… We are resilient and we will rebuild.”

If vines are singed by the heat but not completely destroyed, they can bounce back.

But if intense heat was able to not only kill vines but also destroy vital and expensive infrastructure such as trellises and water drip systems, that can be harder to restore without deep reserves of capital.

“Ultimately, if you’re operating a small vineyard and everything has burned to the ground, that can be devastating,” John Aguirre, president of the California Association of Wine Grape Growers.

Another potential setback for affected vintners include how badly their workers were affected by the blaze, as well as whether road closures and other logistics matters could make it difficult for them to even get to work and help with the rebuilding process.

Even if a winery was spared the fire’s wrath, there will be trickle down effects stemming from the damage to area homes, which often belong to winery employees, says Rob McMillan, founder of Silicon Valley Bank, which provides advisory and banking services to the wine and technology industries.

And he adds that even if a winery carried full insurance – the kind that will pay out on loses at a retail level, “so you preserve the profit you were expecting on each bottle” – rebuilding tasting rooms and other facilities could take a year or more, time that could allow a brand to fade from memory.

“When you’re out of sight, you’re also out of mind with the folks handling your accounts or customers,” he says. “That’s tough.”