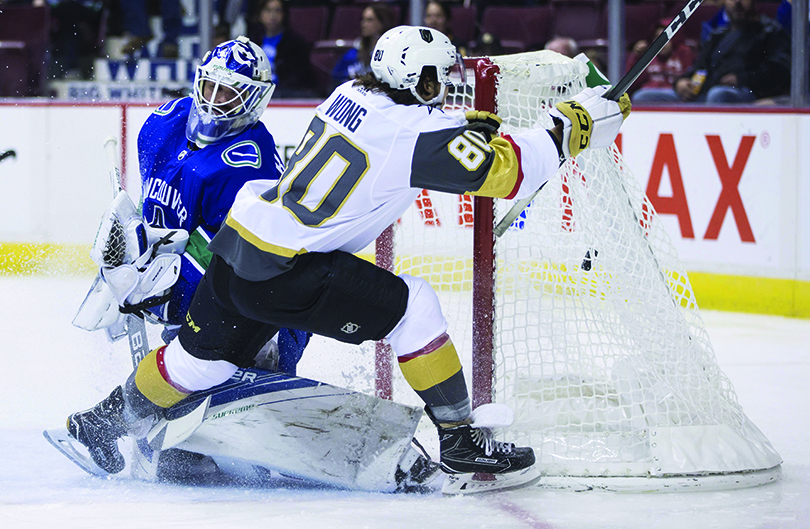 George, being a big hockey fan, was headed to Las Vegas to watch the city’s first-ever professional sports team, the Vegas Golden Knights, play the Detroit Red Wings. He was able to secure a ticket for the sold-out game and made his way to the beautiful new T-Mobile Arena. After finding the suite level, George was directed to his seat in the lodge section across from the Goose Island Lounge. He got settled and was taking in his amazing view of the ice, but sensing the slight chill in the arena, he felt the need for some liquid fortification so he headed to the bar.

“Good evening and welcome to Goose Island. What can I get for you?” the bartender inquired.

George, taking a quick peek at the bartender’s name tag, quickly responded, “Well Tim, I’m a little frosty – can you recommend something to warm me up?”

“You should try our Hot Buttered Rum. It’s guaranteed to take away the chill and put a smile on your face. It’s like a blanket for your insides,” Tim suggested.

“Sounds fantastic! I’ll try one, for sure,” he ordered.

George returned to his seat with his steaming mug of Hot Buttered Rum just as the puck was dropped to begin the game. Taking his first sip, he found the tipple to not only be piping hot temperature-wise, but also the potent Rum warmed and fortified him. The drink developed with a richness from the creamy butter and brown sugar, followed by the baking spices and opulent Rum finish. George soon found himself in a very happy place. By the end of the first period, he was ready for another cup of Tim’s yummy warm brew.

“Hey Tim, that was delicious,” George declared, as he approached the bar. “The last time I had a Hot Buttered Rum was years ago at the Bellagio.”

“Great! Let me fix you another one,” Tim replied. “We use the same recipe the Bellagio used featuring TAG’s homemade batter, but we substitute Pyrat XO Rum in place of Mount Gay Eclipse. So glad you like it!”

Returning to his seat and taking a large slug from his second mug of Hot Buttered Rum, George quickly noticed that the earlier chill he experienced had now completely disappeared. His toes were tingling and his heart was merry. With the Golden Knights up 3–2 at the end of the second period, George decided to pay Tim one last visit at Goose Island for a final final.

“One more?” Tim inquired as he saw George approaching his bar.

“What is it with these things? They truly do warm the soul and are very addictive,” he replied. “What’s the story on their history anyway?”

“Well, Hot Buttered Rum dates as far back as George Washington’s time when, according to the American Heritage Cookbook, the drink ‘found its way into domestic politics.’ Candidates would provide generous quantities to constituents in order to influence the vote,” Tim answered. “The drink has its origins in Europe where hot, spicy alcoholic tipples have been used to warm souls against bitter cold winters for centuries.”

Tim illuminated that in the 1650s, Jamaica began exporting molasses to Colonial America, where New Englanders started distilling it and utilizing Rum in cold weather beverages such as hot toddies. They then added butter and spices to enrich the beverage, thus creating the Hot Buttered Rum. But not everyone was a fan of the steaming beverage, Tim went on to explain. Even cocktail enthusiast David Embury wrote in his 1948 book, The Fine Art of Mixing Drinks, that it was “the worst” hot concoction. He described it like this:

“The lump of butter is the final insult. It blends with the hot Rum just about as satisfactorily as warm olive oil blends with Champagne! I believe that the drinking of Hot Buttered Rum should be permitted only in the Northwest Passage and, even there, only by highly imaginative and overenthusiastic novelists.”

“The key to a great Hot Buttered Rum is preparing it with a batter that has been made in advance, to give the spices, butter and brown sugar an opportunity to come together and get acquainted,” Tim continued. “Can I make you one more for the last period?”

Well, unfortunately the Red Wings owned the third period and defeated the Vegas Golden Knights 6–3, but George could not have been happier as he saw a great game in a great new arena and got reintroduced to a fantastic cold weather libation. On his way out, he made a point of stopping at Goose Island Lounge to thank Tim for his amazing hospitality.

“Hey Tim, I just wanted to say thanks for the amazing Hot Buttered Rum and making my time here at T-Mobile Arena a treat,” George acknowledged.

“My pleasure. And by the way, January 17th is National Hot Buttered Rum Day, in case you want to celebrate,” Tim explained. “You can even buy pre-made Hot Buttered Rum batter from Trader Vic’s, but I wrote down the recipe for TAG’s homemade batter for you so you can make our recipe at home.”

George left the arena with the recipe in hand, a big smile on his face and a warm, happy feeling coming from inside!
Happiness! 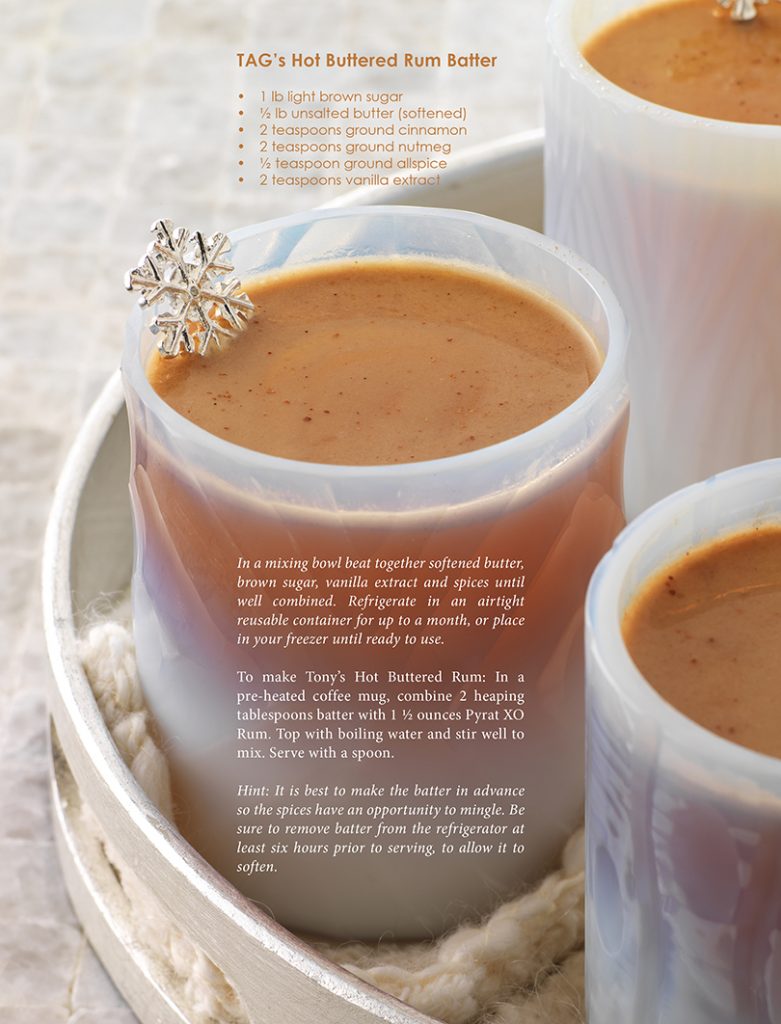