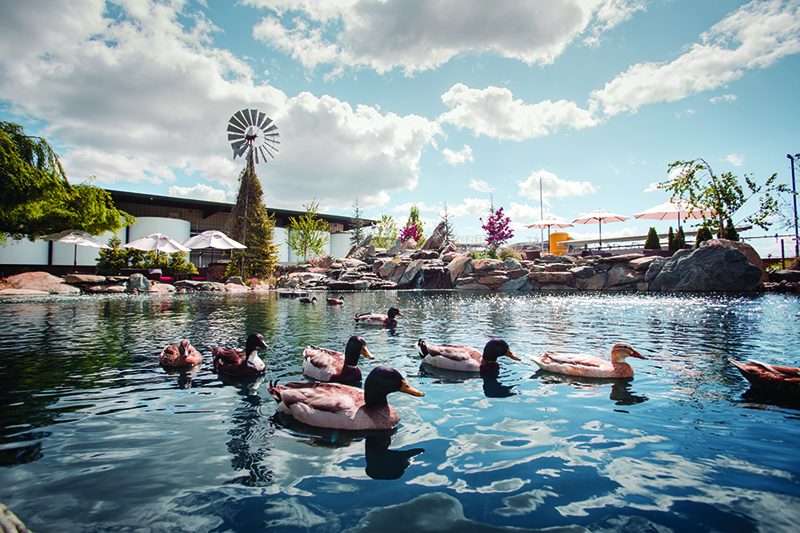 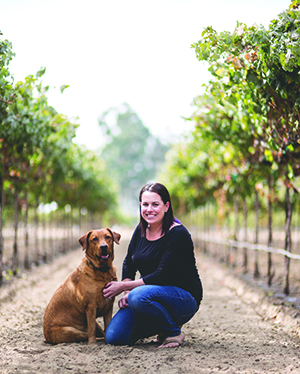 Melissa and her dog Hazel.

Michael and David Phillips represent the fifth generation of their pioneering Lodi grape-growing family. The winery was established in 1984, and it was one of only seven wineries in the Lodi appellation at the time. They built their current winery in 2009, a Lodi landmark. Michael’s son Kevin Phillips and daughter Melissa Phillips Stroud are now overseeing day-to-day operations at the winery. The winery has grown over the years but recently the family has begun a very large expansion project that will triple the size of the current winery over the next three years.

After releasing their 7 DEADLY ZINS old-vines Zinfandel in 2002, the winery realized huge growth and expanded its line-up of eclectic wines to include EARTHQUAKE, INKBLOT, FREAKSHOW, RAPTURE and the newest, MICHAEL DAVID WINES. Many of us enjoying these wines had no idea they came from the Michael David Winery. In 2013, the Michael David label was created with Chardonnay, Sauvignon Blanc, Ancient Vine Cinsault and Petite Syrah. Melissa Phillips Stroud gave us some insights into the winery’s expanded offerings. 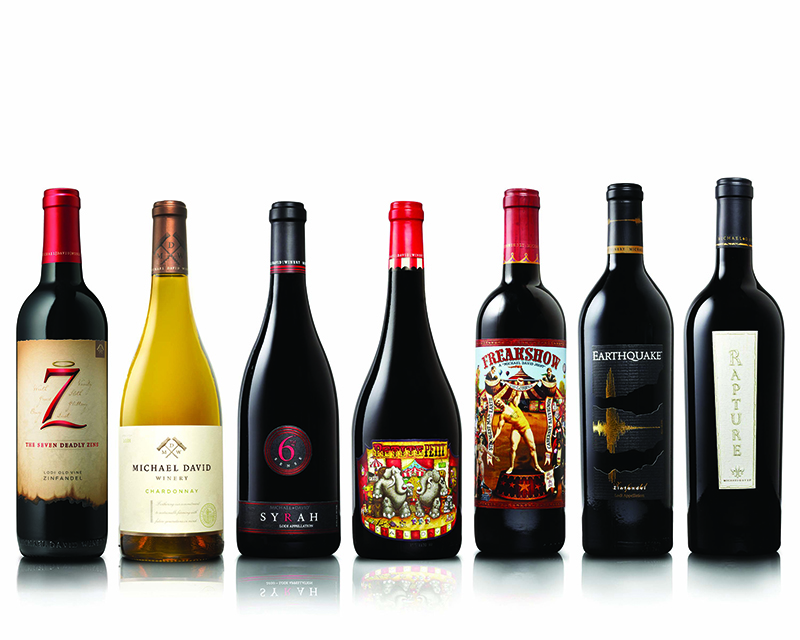 Mike: The newest addition to the portfolio, Michael David Wines, has a traditional label – an escape from the eclectic labels of your other wines. Why the transformation?

Melissa: While we are known for being rather eclectic, we believe there’s still a place for a traditional label. It really came down to a few key components: branding the Michael David name, paying homage to our family history, and adorning our Chardonnay, the largest volume wine under this label, with a more consumer appropriate package for the varietal.

We felt a more traditional label would also present the opportunity to market Michael David Winery as a brand, with small lot varietals that pay tribute to our growing history in the Lodi region. Many consumers know our individual brands like 7 Deadly Zins or Freakshow, but they didn’t know all these wines were produced by the same winery. This label reflects our winery logo of crossed corkscrews and family seal that has adorned our bottles since the winery’s establishment in 1984. The more we can brand Michael David, the easier it will be for consumers to recognize all the different wines produced by Michael David Winery. 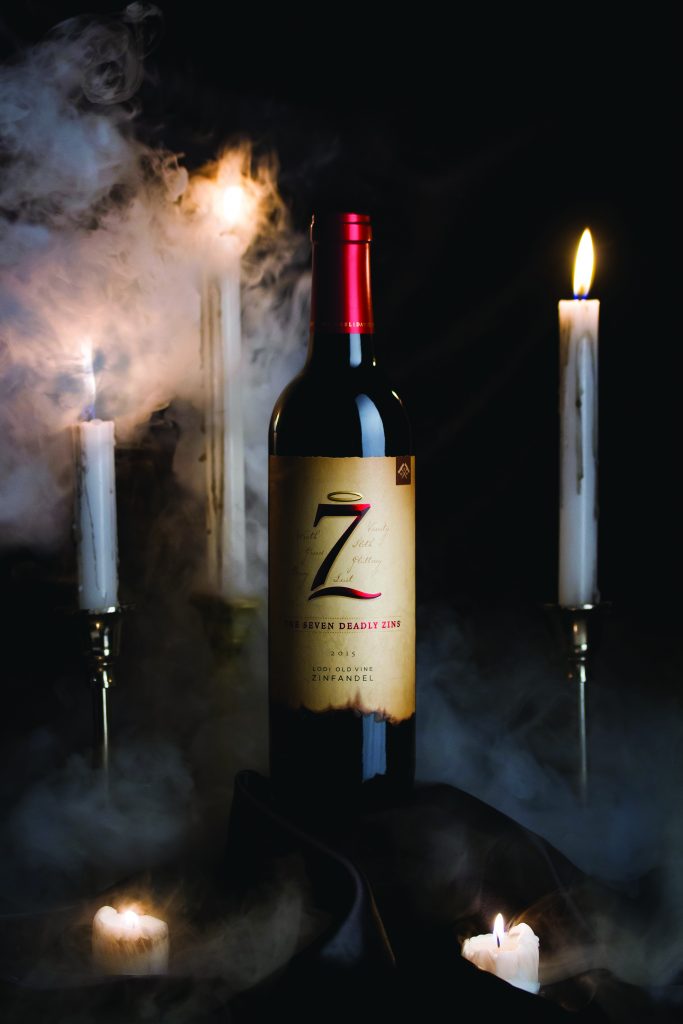 MR: 7 Deadly Zins has been a continued success for the winery. You also produce a red wine under the label with the Lodi appellation. What is that blend?

MPS: 7 Deadly Zins has been our most popular wine for over 15 years and is now the number one Zinfandel in America! Though we have seen immense growth for our Zinfandel, the varietal is a small segment of overall wine purchases at just two percent. Our new blend is a great way to reach consumers in a growing category and introduce them to Lodi Zinfandel. It changes a bit from vintage to vintage, but the 2016 is comprised of Zinfandel, Petite Sirah, Cabernet Sauvignon and Merlot.

MR: The Freakshow label is certainly heterogeneous. Who came up with that?

MPS: We have a fantastic marketing department that works with great designers. They came up with the name and worked with a long-time designer partner. There was also inspiration from my dad, Mike, who frequents antique stores and developed a fondness for old circus posters from the 1930s. Over the years it has continued to evolve and just keeps getting better!

MR: The Freakshow Cabernet is the best seller, I presume, and the 2015 Red Wine looks worthy of note. Can you tell us about that?

MPS: Within the Freakshow brand, the Cabernet is indeed the best seller. The Red Wine is rather new but is proving it can run with the big dogs, as both the Cab and Red are our fastest growing brands. Freakshow Red is a Syrah-based blend that has been a great line extension to the Cabernet. As a family, our 6th Sense Syrah has always been our favorite wine, despite the fact that Syrah as a category is grossly underappreciated. We saw a way to use one of our favorite varietals as a base for an amazing red wine and put a little pizzazz in it, and it has done better than our expectations. Freakshow Red has now become one of my favorite wines in the Michael David lineup. 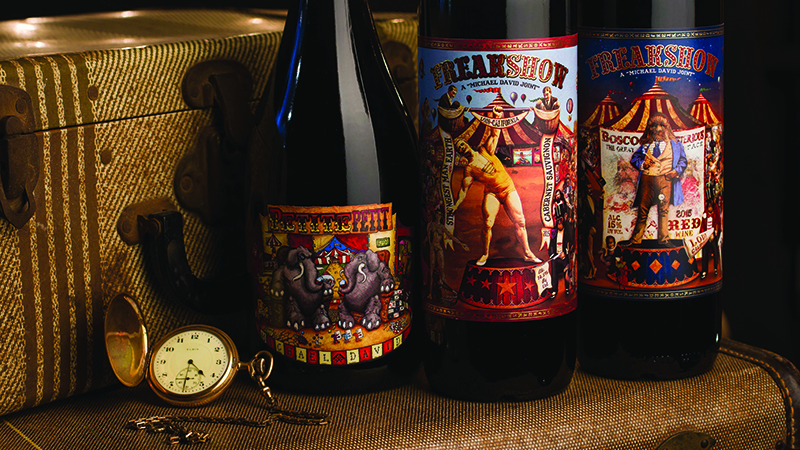 MR: Inkblot has two wines of notable Bordeaux grape varieties, Cabernet Franc and Petit Verdot. Are these grapes grown on your Lodi property?

MPS: I wish I could say these varietals were grown on our property, but unfortunately, we can’t take credit for them. We source both the Petit Verdot and Cabernet Franc from longtime grower friends of ours with whom we have a standing contract; they are Certified 100% Sustainable. The Cabernet Franc is grown very close to the winery on the west side of Lodi, and the Petit Verdot vineyard is on the northeast side of town.

MR: Tell me, am I supposed to be seeing an image in the inkblot on the label? 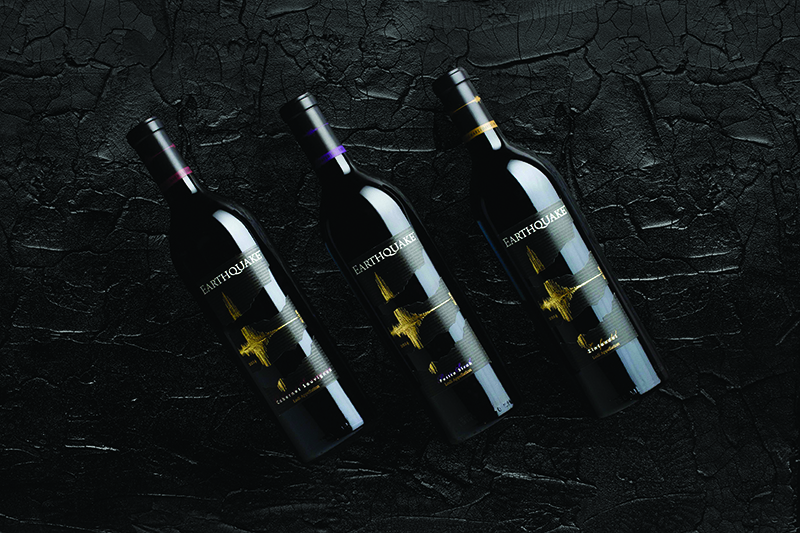 MR: Tell me about the Earthquake line of Cabernet, Zinfandel and Petite Syrah and why it’s called Earthquake.

MPS: These are big, bold wines that will leave your senses quivering! It started with Earthquake Zin, the main varietal for the Earthquake brand. The original vineyard from which we produced this Zin was planted in 1906, the year of the big earthquake in San Francisco. Mike and Dave were walking the vineyard one day and decided to make a wine from these vines and call it Earthquake. It just seemed fitting of the over-the-top wine that came from these grapes. Over time, we have added certain varietals that also fit the big, bold vein-shattering style of Earthquake. 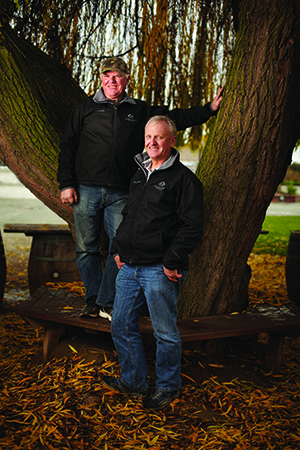 All three varietals are great wines with their own following. Earthquake Cab can be found in some of the top steakhouses in the U.S., like Mastro’s. The Zin is a fan favorite of ZAP followers, and Petite Sirah is adored by “P.S. I Love You” fans, as well as Wine Enthusiast, which awards 93 points to the 2014 vintage.

MR: Rapture, your reasonably priced high-end Cabernet, looks to be an exceptional value considering the production process. Can you give us a little insight as to its creation?

MPS: Rapture is an exceptional wine, especially for the price. It sees 100 percent new French oak barrels and comes from our family vineyard with very low yielding fruit. There is just a hint of religious connotation, due to Mike and Dave’s Catholic school upbringing, which people seem to relate to and really enjoy. We always say, “With such a small production of this wine, don’t be left behind!”