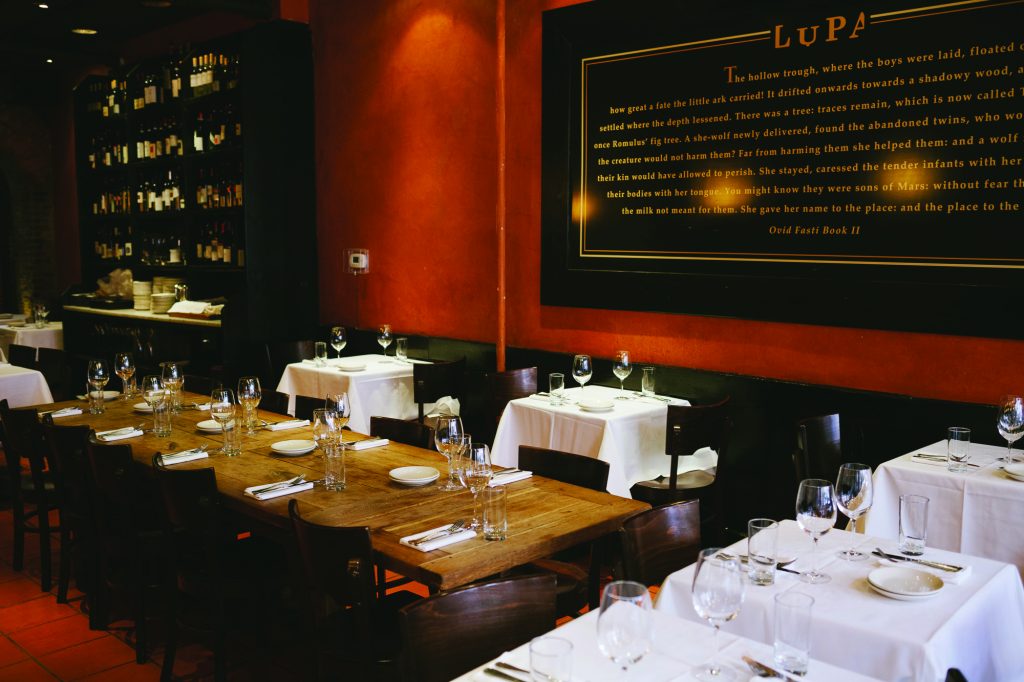 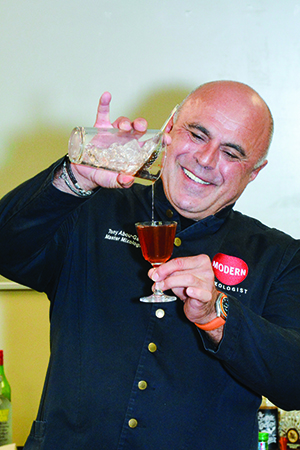 George, being a bit of a bon vivant and someone who truly appreciates and loves the finer things in life, had the opportunity to attend a Gin seminar presented by the always-charming Charlotte Voisey. During the presentation, he learned the subtler details that distinguish one Gin from another and he was quite inspired by a quote of Charlotte’s: “Through greater knowledge comes deeper enjoyment.” This simple statement had such a profound impact on George that from that moment forward, he continuously strived to improve his spirit and cocktail knowledge. So when the opportunity to apply for the prestigious BAR 5-Day Certification Program presented itself, he jumped at the chance and was lucky enough to be one of 64 participants selected.

George arrived in New York, checked into the Ritz-Carlton and headed directly to one of his all-time favorite Manhattan restaurants, LUPA. He grabbed a seat at the little bar and quickly ordered an Aperol Spritz and the Affetatti Piccolo, which consisted of Salumi, Prosciutto di Parma Gran Riserva, Coppa Cotta, Bresaola, Lingua and Testa. Yum! Finishing the last, thinly sliced piece of prosciutto, George contemplated the primi section of the menu, knowing that he had to have the Bavette Cacio e Pepe, but also wanting to try something new. So he asked the bartender for some recommendations.

“Well, if you’re really hungry and you can’t make up your mind, I would suggest the Roman Pasta Tasting Menu,” she suggested, “and pair it with a glass of Bastianich Vespa Bianco from Friuli.”

In addition to his favorite, he also sampled delicious bowls of Saltimbocca Ravioli, Bucatini All’Amatriciana, Spaghetti alla Carbonara, and finished with Pajata Finta.

“Did you save room for dessert?” she asked.

“Not possible, but I would love an espresso and a glass of Averna,” he answered.

George finished his coffee and Amaro, paid the check and headed back to the Ritz where he was anxiously anticipating a very good night’s sleep before launching into the next five days of spirit and cocktail education, known simply as BAR 5-Day.

Over the course of the next four days, George was exposed to virtually every spirit on the planet and many of the most famous cocktails crafted from them. He learned to distinguish between a Vodka made from Rye and one made from potatoes, and was fascinated by the histories surrounding the fantastic profession of bartending, the bartenders who rose to fame during the Golden Age, and the cocktails they fashioned. He was inundated with facts, stories, anecdotes, rumors and tales by the likes of Paul Pacult, David Wondrich, Steve Olson, Doug Frost, Andy Seymour and Dale DeGroff. By Thursday night, he needed a stiff drink! 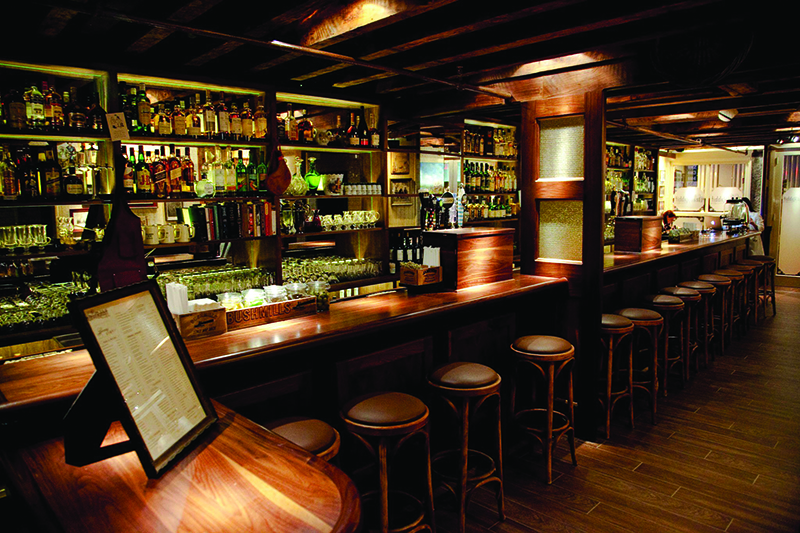 “Hey George, would you like to join my wife, Jill, and myself for some dinner and drinks at the Dead Rabbit?” Dale inquired.

“Sounds amazing! I would love to join you, as long as it’s not an imposition,” George replied.

Within minutes they were pulling up in front of the Dead Rabbit and were greeted by the doorman who led them up the stairs to the parlor, where a welcoming host directed them to the table. George had never been able to get a reservation at the legendary saloon but it helps when you’re with Dale. They were presented with the cocktail menu and a complementary teacup of punch, and then the waitress approached the table to take their order.

After perusing the serious cocktail menu featuring some fantastic, creative concoctions by Jillian Voss, Dale ordered. “I would really love a Manhattan with Bulleit Rye, and if you could ask Jillian to use my bitters I would appreciate it, and a Hot Toddy for Jill.”

They all enjoyed the punch until their cocktails arrived.

“I do enjoy a well-made Manhattan,” George replied, “and this one is fantastic!”

“Many of the boroughs of New York have cocktails named after them – the Brooklyn, the Bronx and the Queens – but none are as famous as the Manhattan,” Dale continued. “A popular story suggests that the drink originated at the Manhattan Club in New York City in 1874, where it was invented by Dr. Iain Marshall at a party hosted by Lady Randolph Churchill, Winston’s mother, in honor of presidential candidate Samuel J. Tilden.”

“And that’s not the story?” George questioned.

“Well, thanks to our good friend David Wondrich, we know that Lady Churchill was in England about to give birth to Winston at the time of the supposed party,” Dale explained. “So perhaps the drink was created at and named for the Manhattan Club, but not at that particular shindig.”

“So what is the story behind the drink? It surely must have been invented in the city,” George commented. 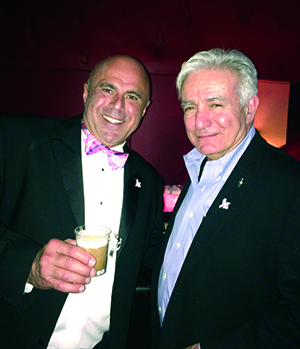 Dale caught the waiter’s attention and ordered another round of Manhattans and a couple of dozen oysters. Then he continued, “No one knows for certain. But according to William F. Mulhall, a bartender who worked at New York’s Hoffman House in the early 1880s, the Manhattan cocktail was invented by a man named Black, who kept a place 10 doors below Houston Street on Broadway in the 1860s. It was probably the most famous drink in the world in its time.”

The second round of Manhattans arrived and George found them to be icy cold, boozy-strong and spicy, with an extra layer of complexity provided by the pimento bitters. As he sipped, he felt the satin-like nectar slowly warm him from the inside out, providing a soothing glow and putting a large smile on his face. All was well in the world.

The oysters were delivered, freshly shucked, and Dale ordered a couple of pints of Guinness to accompany them. The rich, dark, creamy stout turned out to be the perfect match to the sharp saltiness, subtle sweetness and mild brininess of the oysters – who knew? I guess Dale did.

As much as George would have loved to sit there late into the night, drinking another pint and listening to Dale’s stories, he knew that tomorrow morning brought with it the practical and written exams, and he wanted to do a little more preparation. “I would love to but tomorrow is a big day and I think it’s time for me to call it a night,” George answered.

“Us, too!” Jill interjected.

As they were all leaving, Dale made a point of thanking Jillian for the wonderful Manhattans, tipping the piano player and saying goodnight to the doorman. What a class act!

Back at the hotel and settling into bed, George reflected on the amazing evening he had just experienced, and the memory of his father’s words came flooding back to him: “George, a gentleman knows how to tie a bowtie, always gets the door for a lady, tips the piano player and appreciates the beauty that is the Manhattan cocktail!” 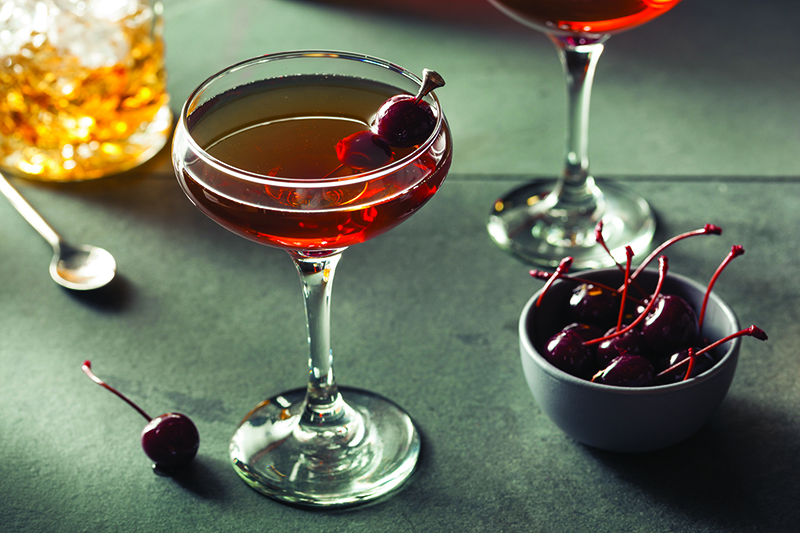