iManagePromo™, powered by IMI Agency, is an online application that engages managers in LTOs and assists them in activating their promotions. By providing clear goals and the ability to track their progress, it is designed to keep managers focused and incentivized along the way. The iManagePromo™ platform has successfully executed over 40 LTOs across the hospitality and casual dining industries. With each LTO being unique, the platform is able to accommodate all types of promotions with different types of goals and incentives.

This summer, iManagePromo™ partnered with IHOP for the third time, to support the introduction of their Ultimate Steakburger. A pre-launch teaser campaign hinting a brand name change from IHOP to “IHOb” went viral and sparked a media frenzy. Everywhere, everyone was talking about IHOP and what the mysterious “b” could be. On day one of the promotion, it was announced the “b” stood for “burger,” and people rushed to their nearest IHOP to give it a try. 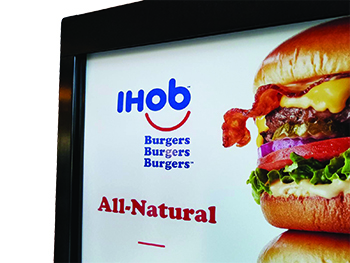 During the first week of the promotion, burger sales grew at an unprecedented rate, with some locations growing their burger sales more than four times over comps! The excitement of the LTO ignited the staff among all IHOP locations. Restaurants were contacting the promo team almost daily asking when the current week’s scores would be posted to their iManagePromo™ site, and watching as the leaders competed for the top spots. Once the first week’s results were in, we were truly blown away and were curious if this growth rate was sustainable. The second week’s results came in and showed, without question, that the LTO was a major success. As each week’s sales totals were reported, the IHOP team proved that the Ultimate Steakburgers are here to stay.

“IHOP’s Ultimate Steakburger Contest was my first opportunity to manage a client LTO of such large scale. iManagePromo’s platform was user-friendly and encouraged a sense of competition amongst the participating restaurants. The excitement generated by the marketing campaign coupled with the ability to easily track performance against other locations in the region motivated the teams to achieve jaw-dropping increases!”
– Jeanette Rolla, IMI Account Manager on the IHOP team

“The launch of our new Ultimate Steakburgers program was our first step in establishing IHOP as more than a breakfast destination, and we knew that servers were critical to driving the trial. The Server Incentive Contest was a great way to inspire friendly competition, make our servers the ambassadors of our delicious new product, and ultimately drive strong sales results. IMI’s scoreboard portal was the contest’s home base – an essential tool to update restaurants in real time and sustain motivation throughout the length of the contest.”
– Sarah Ghavim, Senior Manager, IHOP Brand Marketing

During the course of the four-week promotion, there were over 20,000 page views on the iManagePromo™ platform, with over 1,500 participating locations. After the contest concluded, the prizes were distributed to the winning locations, and another successful LTO had been executed.

For more information about iManagePromo™ please visit our website at http://imanagepromo.com/ or contact our promo team at support@imiagency.com.