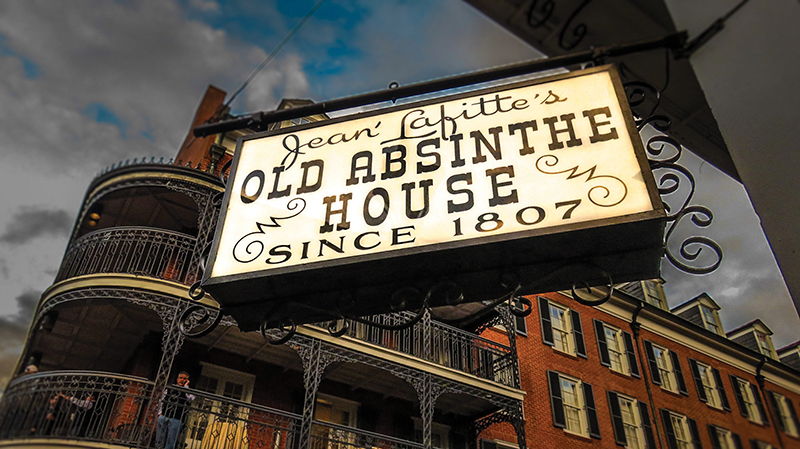 George was sitting at the bar at Shawn McClain’s Sage, one of his absolute favorite restaurants in Las Vegas, finishing a wonderful meal, when he noticed a bar cart with a classic water fountain and several ornate looking bottles roll into the dining room. “What’s on the cart?” George inquired of the barman, as he finished the last bite of his lamb neck pappardelle.

“That’s our Absinthe service we offer tableside,” he explained, handing George a dessert menu. “Have you ever tried Absinthe?”

George had read much about the mysterious green liquid that the bohemian crowd in France embraced during the 19th century; it was what many famous writers, poets and artists would imbibe while searching for inspiration. Although he was very studied on the subject, he had never actually tried “la fée verte” (French for “the green fairy”). “I’ve never actually experienced Absinthe,” George responded. “Let’s have some. Which one would you recommend?”

“I really like the La Clandestine from Switzerland,” the barman replied. “It is a “La Bleue,” or clear absinthe, and at only 106 proof, very approachable.”

George watched as Aaron, the barman, began the ritual by first placing the vintage Absinthe fountain in front of him. Next he poured a measure of the clear liquid into a classic Pontarlier Absinthe glass, placed the slotted spoon atop the glass and placed a single cube of sugar on the spoon. He then placed the glass under the spout and opened the spigot just enough to allow the icy-cold water to slowly drip onto the sugar cube. The sugar sweetened water flowed into and blended with the awaiting La Clandestine, and George watched with anticipation as the clear liquid gradually took on a milky opalescence. 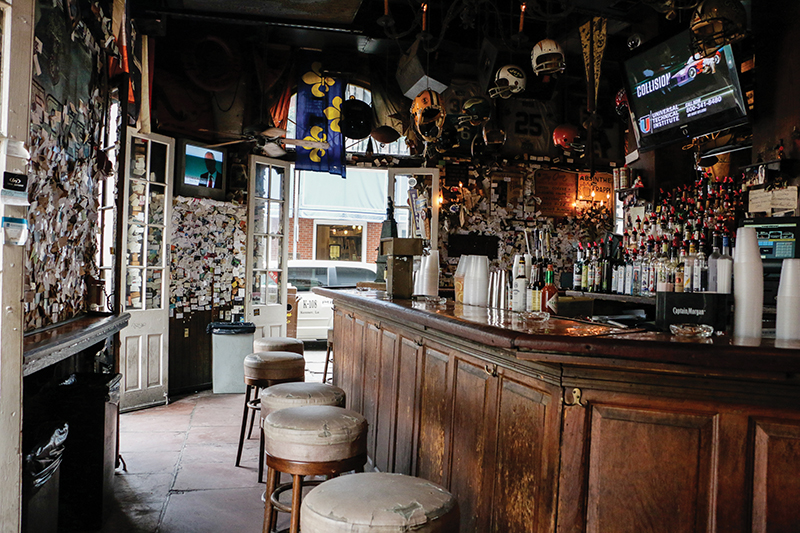 Inside the historic Old Absinthe House, a “must visit” when in NOLA. Try a Gin Fizz – the best in town!

“This is the traditional French preparation. As the water dilutes the Absinthe, the essential oils from the herbs come out of solution, which causes the drink to louche. This also sweetens the Absinthe and causes it to ‘blossom,’ bringing out the herbal flavors and aromas that are otherwise muted,” Arron explained.

Aaron gave the finished drink one last stir with the slotted spoon to ensure the sugar was completely dissolved and the Absinthe drip perfectly prepared, before placing the glass in front of George. Upon smelling the milky liquid, George detected fennel and anise with a pleasant floral note. When he tasted the silky elixir, a sweet licorice prevailed with a well-balanced nod of bitterness. George was an instant fan!

Finishing the last of his drink, George paid his tab and thanked Aaron for a wonderful meal, his great hospitality and exposing him to the virtues of Absinthe. “If you really want to experience Absinthe and the cocktails fashioned from it, you should pay New Orleans a visit!” Aaron suggested, as George departed.

As George headed back to his hotel, Aaron’s words continued to resonate in his mind. After all, it had been quite some time since he had visited the Crescent City. By the time he arrived at his room, the decision was made – he would fly to New Orleans in the morning and discover everything he could about this magical elixir.

Checking into the historic Roosevelt Hotel, George made a beeline for the Sazerac Bar and their signature namesake cocktail. When he arrived, the bar was bustling with activity with most tables occupied. There were only a few empty seats at the historic bar, which features the wonderful murals of Paul Ninas that set the stage of the grandeur that was old New Orleans. George grabbed a barstool and was happy he was wearing a suit and tie. He was quickly presented a bar menu and a glass of water, while the attentive barman awaited his order.

“I see you use Herbsaint in your Sazerac. Wasn’t it originally made with Absinthe?” George inquired.

“Well, it was originally made with Sazerac-de-Forge et Fils French Brandy until phylloxera decimated much of Europe’s vines. Sometime in the 1870s, Rye Whiskey replaced the Brandy and there was the addition of Absinthe,” he enlightened George. “And then in 1912, Absinthe was banned in the United States. Most likely, bartenders used some type of Pastis in its place. Herbsaint was created as an Absinthe substitute without the wormwood and quickly found its way into the drink’s recipe, but I’m happy to make you one with Pernod Absinthe.” 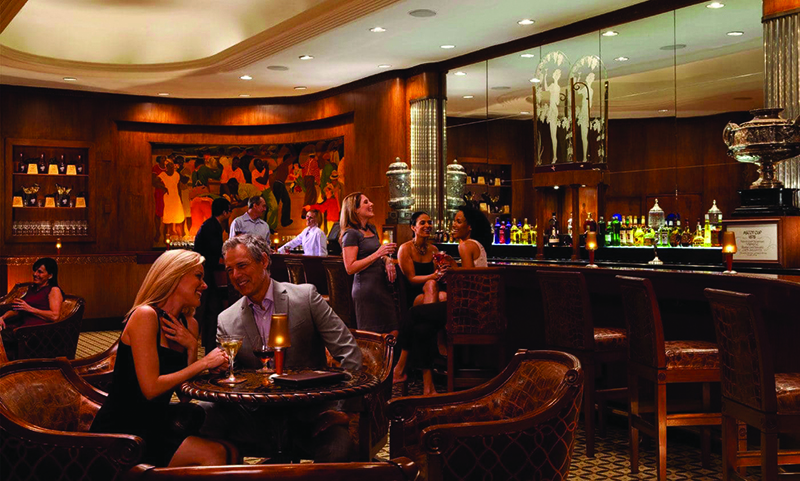 The Sazerac Bar in The Roosevelt Hotel New Orleans, A Waldorf Astoria Hotel.

George found the Sazerac to be bold and powerful from the spicy Rye Whiskey, with just the memory of the bitter herbal notes from the Pernod Absinthe, accented beautifully by the licorice, saffron and citrus contributions of the Peychaud’s bitters. “Fantastic! I’ll have one more and the check please. Tomorrow will be a long day,” George said.

With much Absinthe to be consumed, George’s first stop would require securing a good base and nowhere better than Breakfast at Brennan’s. The restaurant was very busy and George had to wait until a seat opened up at the bar.

“Hi, I’m Jeanette. Here’s our breakfast menu, and what can I get you to drink?”

“I’m in New Orleans to learn about Absinthe. What do you recommend?” George answered.

“Let me make you an Ojen Frappe. It’s an anise-based liqueur, not Absinthe, but very popular here, especially during Mardi Gras,” Jeanette replied. The drink, served over frapped ice, reminded him of a sweet anisette, coupled with the fruity, herbal, spice notes of the Peychaud’s bitters. It proved to be the perfect precursor to brunch.

“This was a very popular drink here at Brennan’s, especially with the Rex Crew during Mardi Gras. They would always drink Ojen Frappes before they got on their float!” Jeanette explained. “It was originally made in Spain but eventually the only place that bought it was New Orleans, so they stopped making it and Ojen disappeared until the Sazerac Company began making it here in NOLA, in 2016.” 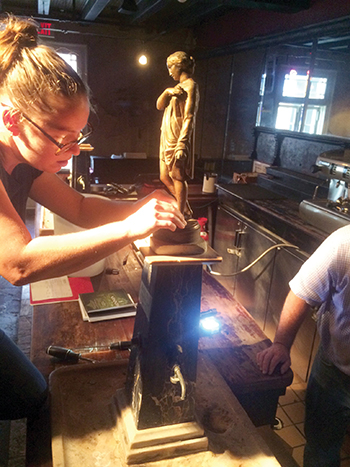 George was now officially famished and ordered a big breakfast starting with the Turtle Soup with Sherry, followed by the fried Rabbit Rushing with creamed collards, eggs over easy and a couple more Ojen Frappes. “If you’re interested in Absinthe, you should go see Laura Bellucci, who’s opening Belle Époque at the Old Absinthe House on Bourbon Street,” Jeanette expounded.

George thanked Jeanette for the recommendation, wonderful breakfast, amazing hospitality and exposing him to a wonderful new cocktail! With a full stomach and a happy, warm glow, he headed to Bourbon Street and found a seat at the Old Absinthe House bar, where Trish recommended an Absinthe Suissesse. The Suissesse was light, fluffy and very refreshing, with the Absinthe balanced beautifully with the Crème de Menthe and the wonderful almond flavor of the orgeat.

“Any chance Laura Bellucci is around?” George inquired. “I would love to talk to her about Belle Époque.”

George waited anxiously, sipping his Absinthe Suissesse, watching as the world passed by on Bourbon Street, until he was snapped back to reality.

“Hello, my name is George. I came to New Orleans to learn about Absinthe and I’ve been told you are the person to talk to,” he replied.

“So, we are opening Belle Époque later this year. Would you like a tour?”

“That would be amazing!” George exclaimed.

“New Orleans holds a strong connection to Absinthe,” Laura began. “The Old Absinthe House is one of New Orleans’ most prominent historical landmarks. Its building was constructed in 1806. In 1869, Cayetano Ferrer began working for the Jacinto Family. Ferrer had honed his craft in the Catalan region of Spain, where Absinthe was all the rage. Along with his love of Absinthe, he also helped introduce the practice of serving Dripped Absinthe Francoise, the slow water drip over a sugar cube to louche the glass of Absinthe,” Laura explained, as she led George into The Parlor, which was doubling as her temporary office. “Can I make you a drink?” 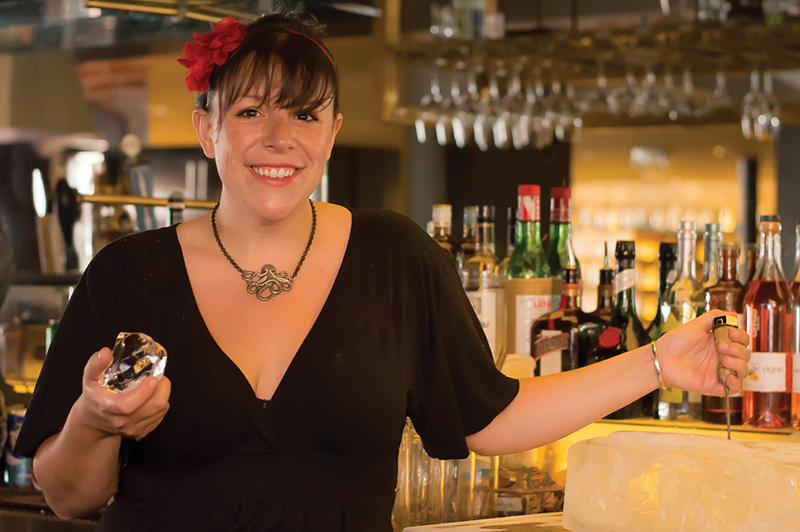 Laura proceeded to make a couple of Absinthe highballs with Butterfly Absinthe, soda water and fresh lime. “Butterfly is the first pre-ban Absinthe of American origin to return to the U.S.A. It was originally made in Boston, circa 1902, at the Dempsey Distillery. Today it’s being made in Switzerland,” she stated. “What dealt the blow to Absinthe in America was the ban of Absinthe in 1912. Sensational stories from France of the deaths of famous authors and artists and mild-men-turned-murderers from Absinthe drinking regularly surfaced in American newspapers. The Old Absinthe House survived the banning of Absinthe by switching to Herbsaint from 1912 to 2007. Our guest books from the 1930s proudly feature the slogan ‘We serve HERBSAINT when ABSINTHE is called for.’”

“So tell me a little about the new joint,” George encouraged.

Laura replied, “Belle Époque will be a clandestine cocktail lounge in the heart of the French Quarter and will offer an intimate introduction to the world of Absinthe and Absinthe-based libations, as well as the spirit’s important place in the history of New Orleans. The original cypress bar and marble fountains of the 1800s are being resurrected from the murky waters of time and restored to their former grandeur, as we strive to untangle the sordid history of our patron saint, the captivating and damnable ‘la fée verte.’”

George finished his Absinthe highball, thanked Laura for her time and promised to return to share another glass and help celebrate the opening of Belle Époque. 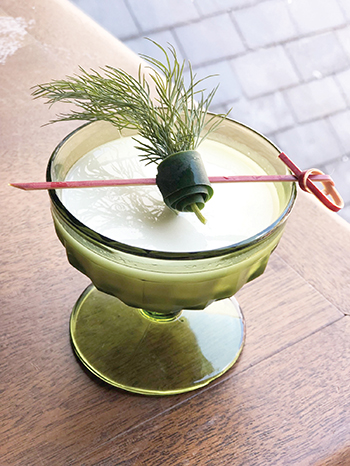