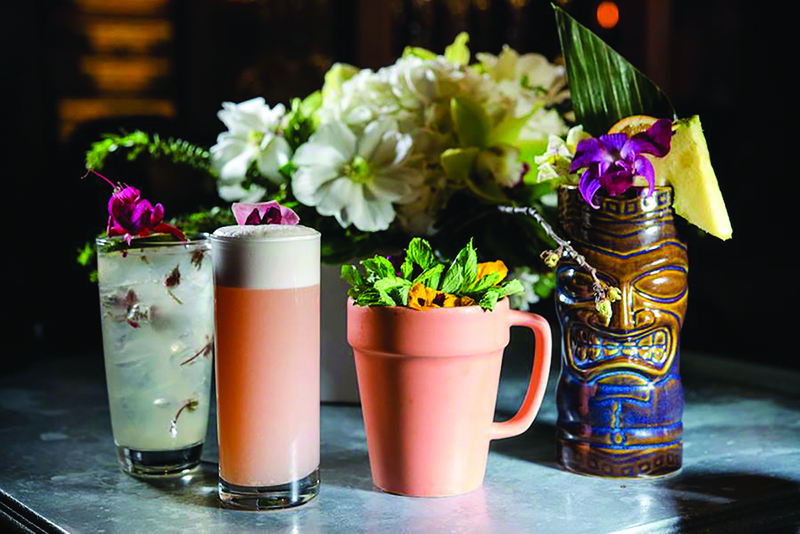 While there’s nothing quite as cozy or comforting as sipping spiked hot cocoa or a hot toddy in front of the fire, it’s safe to say that most of us are ready to put the frigid days of winter behind us. It’s time to look ahead to warmer weather. Even if some areas may still be getting snow in March, we’re forecasting the future will be filled with fresh new flavors this spring, as operators look for ways to stand out and take flavor inspiration from the garden – literally. You won’t find flowers or bugs just in your backyard anymore, as these ingredients are increasingly showing up on cocktail menus and in alcoholic beverage products. Flowers and bugs can be featured in a variety of ways when it comes to drinks, whether it’s as an eye-catching garnish or as a flavor, giving customers an authentic way to experience spring in a cup.

Floral Flavors are Blooming on Menus
As the saying goes, “we eat with our eyes first” and that goes for drinks, too. Flowers don’t have to be relegated to the role of a decorative centerpiece on tables anymore – why not incorporate edible flowers into cocktails for a colorful, Instagram-worthy drink? Take inspiration from New York City’s Arthouse Hotel, which for the past two years has hosted a Flower Market pop-up each spring featuring a floral-inspired cocktail menu at the hotel’s LOCL Bar. Last year’s pop-up included botanical drinks like the Mrs. Green Thumb made with Codigio 1530 Rosa Tequila, safflower syrup, Giffard Fleur de Sureau Savage Elderflower Liqueur and kiwi purée. To really drive home the theme, the cocktail was brought to the table in a mini watering can, and then poured into a flowerpot-shaped mug filled with flowers and mint garnish. Although simply topping a drink with a fresh flower is one way to create a visually appealing drink, mixologists can also leverage edible flowers as garnishes in more subtle ways, such as creating rimmers made with a blend of salt or sugar and powdered or crushed flowers. 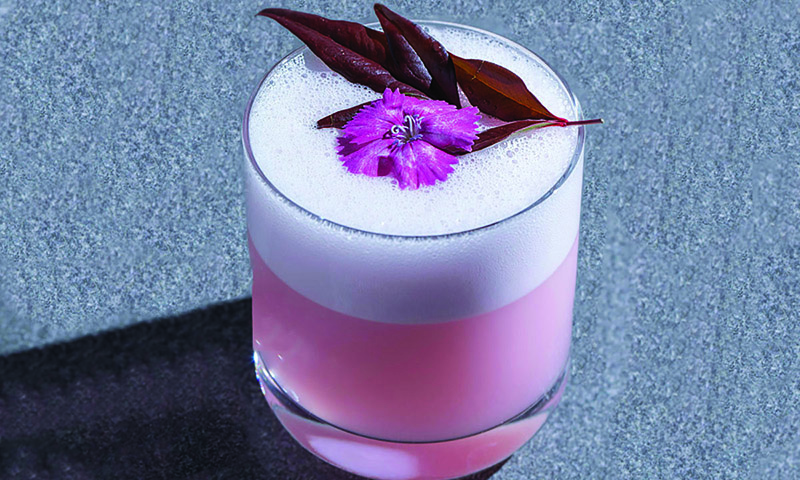 Additionally, flower-infused syrups, bitters and liqueurs are increasingly being used to highlight flavors from the garden. Elderflower, for example, is a trending ingredient in cocktails; it has grown nearly 80 percent on alcoholic beverage menus over the past four years, according to Datassential’s menu tracking tool MenuTrends. The Behind the Green Door cocktail at Cortina, acclaimed chef Ethan Stowell’s Italian restaurant in Seattle, mixes elderflower with Gin, lemon, cucumber, rosemary and celery bitters. And casual dining chain Chili’s is getting into the elderflower craze as well, featuring the Cherry Blossom as its January 2019 Margarita of the Month made with Lunazul Blanco Tequila, St. Germain elderflower liqueur, Chili’s fresh sour and grenadine. Other flavors like lavender and hibiscus are also gaining significant traction. Hibiscus has increased 68 percent on alcoholic beverage menus over the past four years, while lavender has grown 155 percent in the same period. When looking to add a hint of botanic flavor to a drink, bartenders can look to pre-made products like rosewater, orange blossom water or crème de violette. Or they can simply create their own infused ingredients to have greater control over the final taste – just combine fresh edible flowers, tea leaves or even spruce or pine needles with simple syrups or neutral-flavored spirits, for house-made infusions.

Spring also heralds the coming of “sakura” (Japanese for “cherry blossom”) season, and while cherry blossoms have cultural significance in Japan (where picnic-like flower-viewing parties with food and sake are often held), operators stateside are beginning to get into the sakura spirit, too. With Japanese flavors and ingredients trending (half of U.S. consumers love or like Japanese food, according to Datassential FLAVOR), showcasing a special cocktail menu for cherry blossom season could help drum up customer interest. International izakaya-inspired restaurant chain Zuma celebrated cherry blossom season last year with sakura-themed drinks like the Hanami Sour, which combined Ciroc Vodka, aloe vera, jasmine and rose yogurt, and almond syrup. Meanwhile, Washington, D.C.’s Pop Up Bar, which runs various themed pop-ups throughout the year, hosted a Cherry Blossom Pop-up Bar last spring that featured a massive canopy of cherry blossoms and a sakura-inspired spin on a classic Gin and tonic made with Tanqueray and cherry blossom tonic.

Creepy Crawly Cocktails
While flowers are one way to make your cocktail creation Instagram-worthy, there’s another ingredient you can leverage that’ll have customers reaching for their camera (and raising their eyebrows): bugs. While insects can add shock value and make a drink more memorable, there’s also a more serious rationale behind the incorporation of bugs in alcoholic beverages. With growing consumer concerns about environmental sustainability, a number of operators and manufacturers are turning to insects as a lower-cost and more sustainable source of protein compared to more traditional animal meats. While overcoming negative consumer perception of insects is still an ongoing struggle, some mixologists are choosing to embrace bugs with open arms, featuring them front and center on the menu. The Black Ant in New York, for instance, features grasshoppers and ants on nearly every part of the menu including the cocktail list. The restaurant’s namesake black ant is specially foraged from Oaxaca and is used to make “sal de hormiga,” or “ant salt,” which tops the rim of the Yum Kaax cocktail (Mezcal, corn juice, lemon and agave). Similarly, “sal de gusano” or “worm salt” is a common ingredient in Mexico made from ground-up rock salt, moth larva and dried chile peppers. It tops the rim of the Pineapple Express – a blend of El Jimador Reposado, lime and grilled pineapple syrup – at Pajarito in St. Paul, Minnesota. 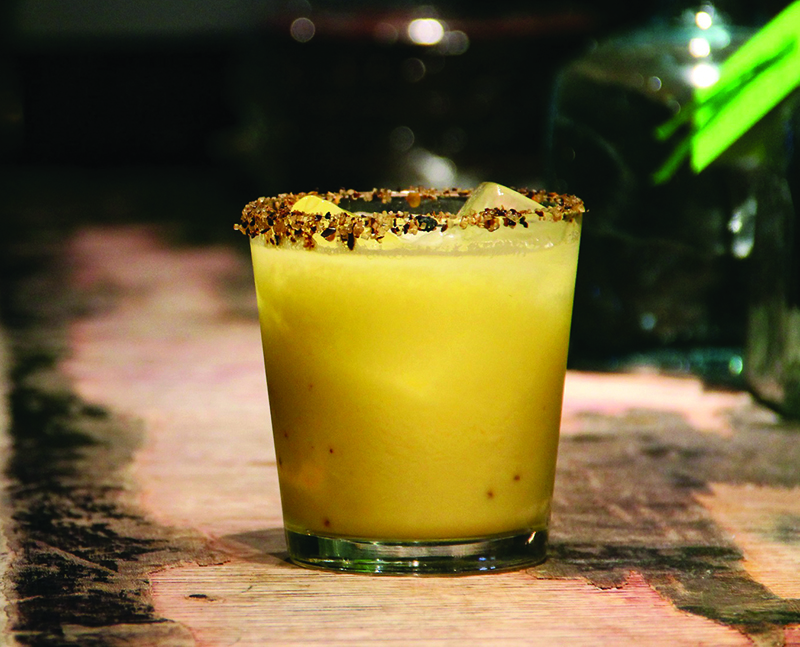 We know what you’re thinking: Worms, ants, gosh … what’s next? Well, how about crickets? Also sometimes called “chapulines” (Spanish for “crickets”), the crunchy arthropods are one of the more commonly featured bugs in cocktails. At Bitter & Twisted Cocktail Parlour in Phoenix, Arizona, the classic grasshopper cocktail is taken quite literally with a green chile liqueur that’s blended into traditional crème de menthe, cream and Fernet Branca Menta, with a small cone full of (what else but) grasshoppers sautéed with chile and chocolate, garnishing the side of the glass. In the past, San Diego’s Madison on Park has menued a limited-time Santa Muerte cocktail for Halloween, featuring Critter Bitters (a type of bitters made from roasted crickets that’s available at retail), Tequila, beet and lemon juices, egg white and a roasted cricket garnish.

Need a Breath of Fresh Air? Take a Walk Through the Garden
While customer reactions to flowers versus bugs can be wildly different, when featured in a cocktail, both ingredients can be effective differentiators for any alcoholic beverage establishment. With customers placing more value on seasonality and fresh ingredients – 61 percent of consumers love or like seasonal ingredients, according to Datassential FLAVOR – consider going a step beyond simply featuring in-season fruits in your alcoholic drinks, by experimenting with in-season flowers as well. Similarly, as the dialogue around sustainable food practices continues, mixologists who leverage insects in cocktails may be perceived as more trend-forward than the competition. According to Datassential’s TIPS: Fall 2015, 33 percent of consumers consider insects as ingredients to be innovative and adventurous, while roughly a quarter of consumers under age 30 say they would be likely to try insects at a restaurant (pretty good for creepy crawlies, no?).

With the winter chill finally behind us, don’t let your alcoholic beverage menu stay frozen in time – wow customers by incorporating some fresh ingredients that are popping (and hopping) up this spring.