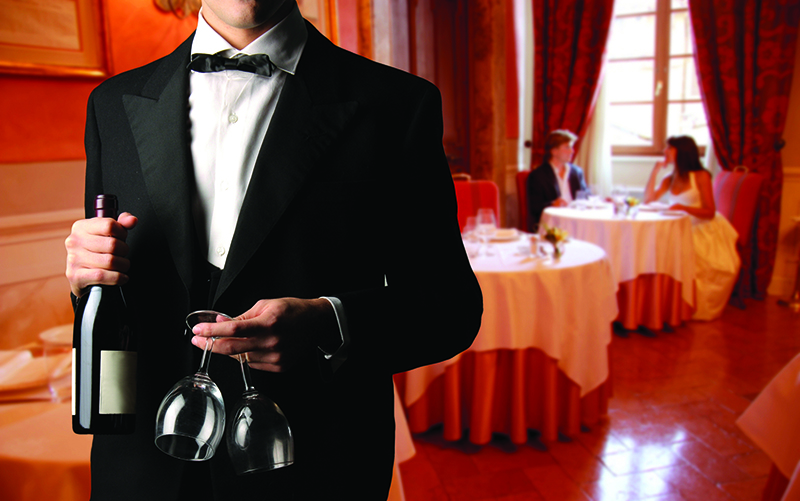 A number of restaurant wine experiences in the past six months gave rise to this article. Complaints about the level or quality of service are nothing new, especially as it becomes increasingly difficult to find appropriately skilled servers. Personality and soft skills go a long way toward mitigating lack of knowledge or skills, but when that lack of knowledge or skills negatively impacts the guests’ experience, guests are not so forgiving. Knowledge should include rudimentary recognition of some wine faults.

Wine Faults
TCA (Trichloroanisole)
Wines, in general, are less faulty than ever before. However, faults do exist and those involved in wine sales and service should be aware of them and have the ability to identify them. One of the most common faults that one encounters is cork taint caused by TCA (Trichloroanisole), which emanates primarily but not exclusively from tainted cork. I am reminded of the surprise experienced when opening multiple bottles from a case of screw-capped wines, all of which suffered from TCA or its close relative, TBA (Tribromoanisole). Wines at barely perceptible levels of TCA may lack fruit character, but most commonly will have a dank, musty basement smell. Most consumers are oblivious, as are most servers. The consumer will think that the wine wasn’t particularly good and never order it again. Recently, I experienced such a wine and as soon as I mentioned it, the server sniffed the glass and said, “My apologies. I’ll be back with another bottle” which he brought with a fresh glass. But I had another recent experience at a “fine dining” establishment where the server stared at me blankly and had no idea what I was talking about. Not that I am ever unwilling to share what wine knowledge I may have, but the audience must at least pretend to be interested.

Incidences of cork taint seem to have declined in recent years and some cork companies, such as DIAM, now guarantee against such a flaw, but it is still estimated that between two and four percent of all bottled wines with corks have this flaw. How many other consumer products exist with failure rates represented by bottled wine? None. Servers should be able to recognize it, and, in my mind, it is the highest act of service for a server to open a bottle and sniff the cork and the wine prior to offering it to the guest. I was taught that sniffing the cork would merely reflect the smelling of wine on cork. But years of experience have led me to support the notion that smelling the cork may reveal cork taint, while it is less obvious in the glass. Cork taint may have been the greatest impetus for the use of Stelvin or screw-cap closure in the industry.

Reductive Wine Faults
Certainly, Australian and New Zealander winemakers have been in the forefront of the use of screw caps. With decades of research and improved technology applied to such closures, there is less likelihood of reductive development of wine that is represented by hydrogen sulfide (rotten egg) or onion and skunky aromas from the development of mercaptans. In fact, wine development can and does take place even under screw cap. The challenge with screw caps used to be the lack of oxygen/air ingress, leading to potential reductiveness. If ever you open a screw-capped bottle that seems “closed” or “dumb” and lacking any aromatics, I would suggest pouring the wine into a decanter or carafe and swirling it to see how the wine reacts with aeration. Can it open up and reveal its potential quality? Or you may prefer to invest in one of those aeration devices that are placed on a bottle and seem to have some positive impact. Screw caps are still decried by many and associated with inexpensive, low quality wines but they have the advantage of both ease of opening and being a good closure. The caveat I have is that if the screw cap area has been banged up through mishandling, you will often get some slow leakage and probable oxidation – another major wine fault, though less prevalent today.

I have also had three experiences in the last two months with “natural” wines that relate to this discussion. Two of the wines were biodynamic and the other an organic/biological wine. In all three cases, the wines seemed on the verge of being faulty at first, with reductive smells. There were definite funky aromas that were not derived from brettanomyces, which I will briefly describe later. Swirling the wine in the glass was to no avail so I asked the server to bring a decanter and decant the wine, which was done but far too delicately. After swirling the wine for several minutes, in each case I found the wine to “open up” and reveal some of its more attractive qualities. An hour or so later, the wines were in a condition to drink, but by that time our entrees had long been eaten. I had a similar experience with one of my wine classes, where the wine was left opened after most of the bottle had been tasted, and by the next day, the wine had fully opened up and tasted delicious! What is a restaurateur to do? I would suggest having a few aerators on hand to expedite the time needed for the wine to open up, even though it is unlikely the wine will achieve its apex while the diners are there. Know your wines and keep your audience in mind. If the wine isn’t going to open up quickly, then perhaps forego it.

There are other synthetic closures in common use today, including corks made from glass by the German company Vinolok. While they certainly look fancier than screw caps, the potential negative issue is that the seal between Vinolok’s synthetic ring and the bottle may be imperfect, allowing air ingress and the wine to become quickly oxidized. Other closures such as Nomacorc’s biodegradable sugarcane byproduct are much improved and some even give the appearance of a “natural” product. The challenge in the past was that either the cork was so tight it was almost impossible to uncork a bottle without some glass chipping from the mouth of the bottle, or that if the closure was loose, the wines were oxidized.

Oxidation Wine Faults
Oxidation-derived faults in wines are less common today but still prevalent. They occur more frequently in white wines that lack the antioxidants of reds. An oxidized wine might smell less aromatic, almost dull, and in more extreme examples, like cardboard. If you smell a wine that reminds you of a bruised apple, it is one reflection of the formation of aldehydes – a step toward acetaldehyde. Another fault is volatile acidity, especially vinegary smells. If one encounters dill pickle juice aromas that don’t lead to complexity and become too dominant, it is a fault. These faults may be due to a less-than-good cork closure or poor wine-cellaring where the cork has been allowed to dry out because of insufficient humidity. There are other forms of oxidation that are too technical to list here. Wines should smell fresh, unless fortified, and if they don’t, your antennae should be up. 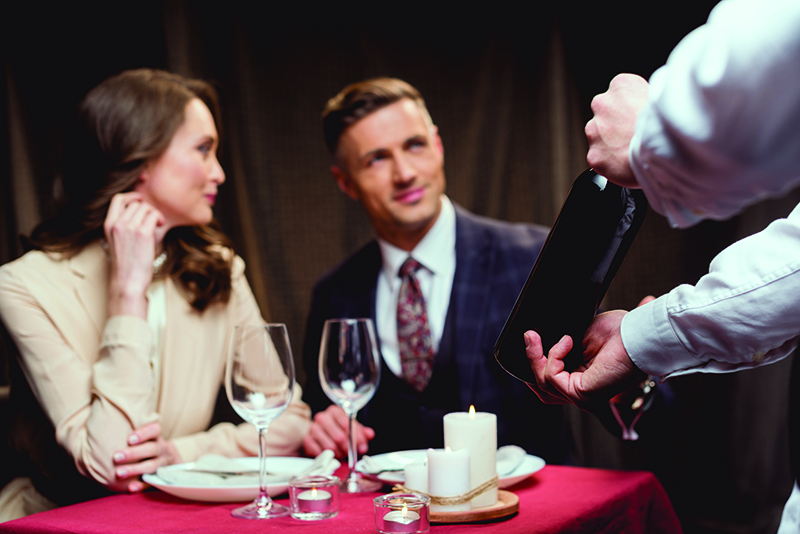 Dekkera/ Brettanomyces
A fault, or as the French used to say, “goût de terroir” (taste of the soil/place)? The “Brettanomyces” is a fault, which used to be described by the French as “gout de terrior,” meaning “taste of the soil/place.” The aromas found from this, ever-present in a winery’s yeast family, are medicinal smelling compounds associated with Bandaids® or medicine cabinets. In low concentrations, one can get clove and spice notes. Other compounds formed by this yeast include barnyard and earthy smells. “Brett,” as it is often referred to, lowers the perception of fruitiness and increases the perception of alcohol and tannins. It mostly impacts lower acid red wines and is seldom an issue with whites.

Biggest Wine Service Faults
Aside from the lack of familiarity with the wine or merely having a canned verbal representation to offer, it is the lack of attention and care of the customer that is the biggest challenge. Servers are too busy or untrained to watch the customer’s first taste of the wine (or food) in order to read whether or not they are enjoying the experience.

A close second is the incorrect service temperature of wine, which is often the greatest challenge to a customer’s enjoyment. Whites are served chilled because colder temperatures reduce our perception of acidity. Think of tasting warm orange juice in the morning and you will understand what I mean. But if served too cold, a wine may not reveal itself in terms of aromas. The more alcoholic and the less acidic the white, e.g., most Chardonnays, the warmer its service temperature should be. A big oaky California Chardonnay would do well being served at 50F, not 40F. But serving white wines really chilled is not as egregious as serving reds at “room temperature,” which in today’s restaurant world is 70–72 degrees. No wine should be served over 64 degrees as the warmer the temperature, the more noticeable the alcohol and acidity. The wine becomes less refreshing and less of a pleasing accompaniment to the food one is enjoying; it will subsume the food. Enhance a light-bodied red having high acidity and low tannins by serving it with a slight chill to it.

There’s not much you can do about wine faults when you come across them, except to educate your staff as to how faults affect wine; however, there’s certainly something restaurateurs can do about the biggest wine service faults. Addressing those will go a long way toward getting customers to be on the restaurateur’s side and support the venue’s mission to serve customers and treat them with all the hospitality due them.