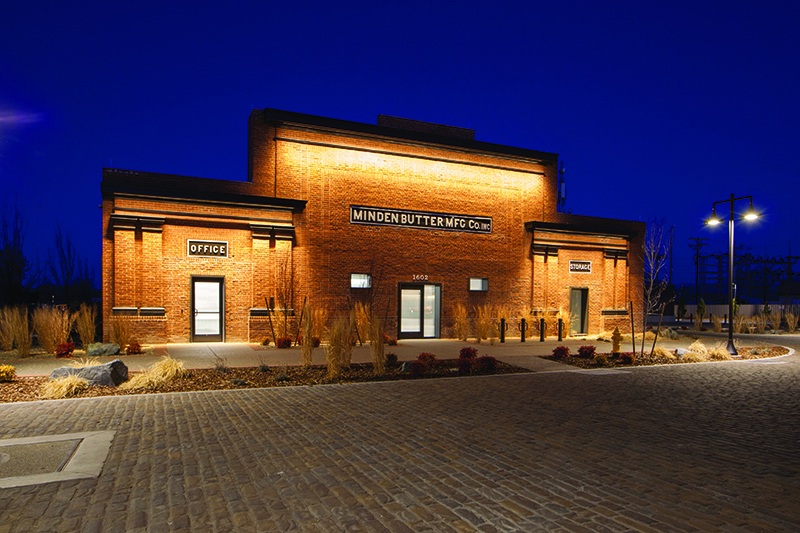 The Creamery at night

George is back in Las Vegas for a poker tournament and after a grueling day of Texas Hold’em, he has developed a staggering thirst. As the tournament is being held at Mandalay Bay, he quickly makes his way to one of his favorite haunts, Libertine Social. When he arrives, the bar is bustling with what appears to be an after work, or after convention, or after a day of playing poker crowd. George secures a seat at the end of the long bar and is presented a menu and a tall glass of iced water.

“Welcome back to Libertine Social and Happy World Cocktail Day*,” the young man behind the bar welcomes him. “I’m Fabian and I’ll give you a minute to look over the menu. Let me know if you have any questions.”

George peruses the cocktail menu, scaning the list of swizzles, fizzes and highballs before spotting a drink called a Bee’s Knees, listed under cocktails. “What’s a Bee’s Knees?” George inquires.

“It’s a Prohibition-era cocktail that most likely was created to mask the flavor of bathtub Gin with citrus and honey,” Fabian explained. “We feature Juniper Grove Gin, which definitely doesn’t need to be masked and makes a delicious Bee’s Knees!”

Fabian places a chilled cocktail coupe in front of George and gently pours the frothing mixture from a shaker into his glass, carefully garnishing it with a dehydrated lemon wheel and delicate white edible flower. George raises the glass to his lips and upon taking his first sip, he notices the bright juniper, citrus and floral notes of the Gin shining through and being complemented beautifully by the sharp, fresh lemon juice that was balanced perfectly with sweet, desert honey.

“Well, what do you think?” Fabian inquired, looking at George’s empty glass.

“Fantastic!” George replied. “It’s amazing how yummy those three ingredients are together. I better try another one!”

“Great! May I recommend an order of our Scotch olives to go with this one? They pair beautifully together,” Fabian suggested.

George found the rich, creamy feta cheese and lamb sausage together with the briny olive, to be a stunning match for the Bee’s Knees. “I’ll take one more and the check please, but I also have a question. I’ve never heard of Juniper Grove Gin before — what’s their story?” George inquired.

“Juniper Grove is made right here in Nevada, at Bently Heritage Estate Distillery in Minden,” Fabian replied. “It’s just an hour’s flight from here, near beautiful Lake Tahoe. You should check them out.”

Well, George did not need to think twice; he had already decided that once the poker tournament was finished he would make a side trip to Minden to visit the Bently Heritage Estate Distillery. Upon his arrival at Bently Heritage, he immediately notices the level of detail in everything from the historic building preservation to the cobblestone streets and property signage. This isn’t some craft distillery thrown together on a budget — these guys are serious. He walks into the main building and is immediately greeted by a friendly woman asking how she can help him. George explains he traveled from Las Vegas to see the distillery. The woman then signs George up for a full tour and tasting experience that will forever change his view on how spirits should be made. 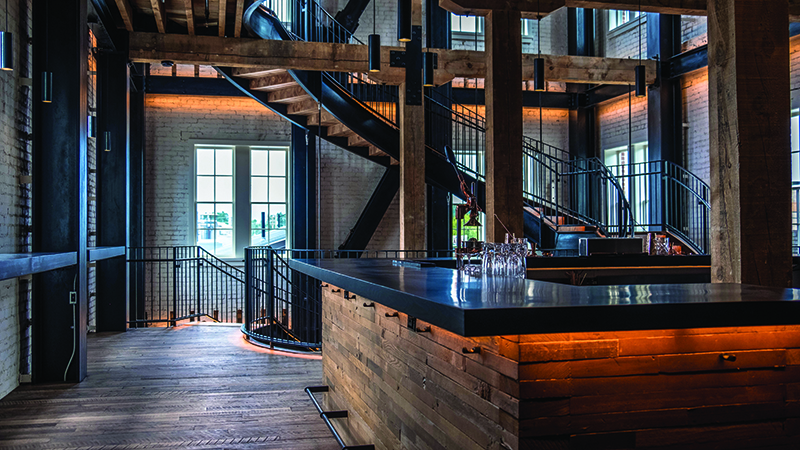 The bar on the second floor 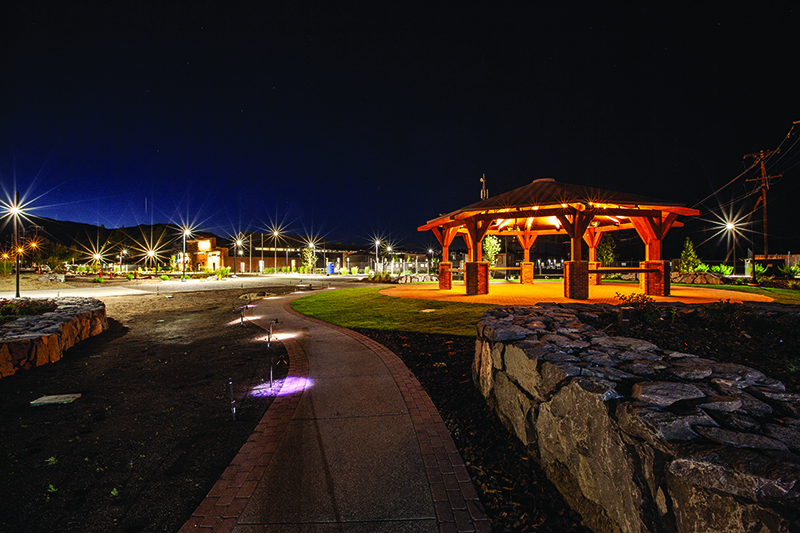 The beautiful gazebo at nigh 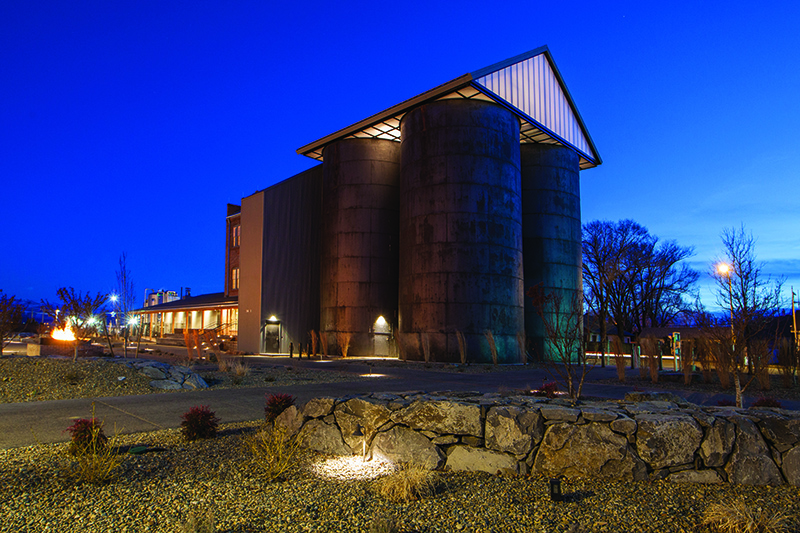 The distillery’s mill and silo 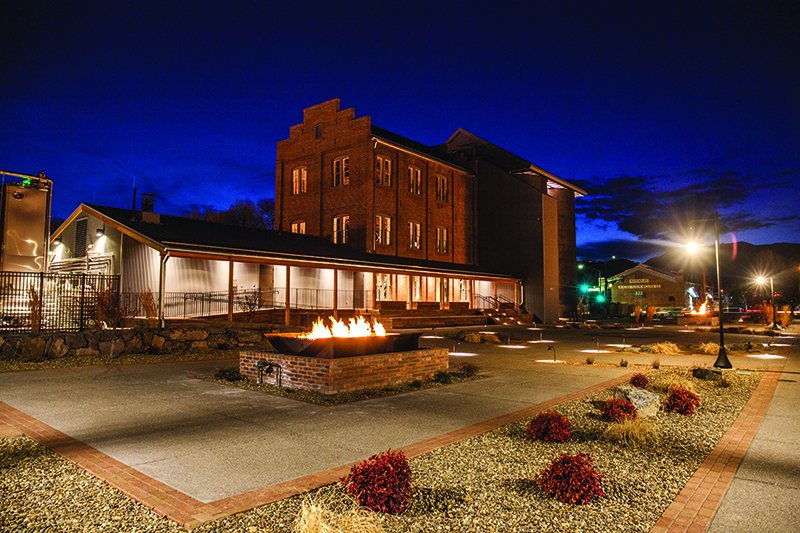 First, a fully restored classic 1943 White Coach Motors tour limo picks him up in front of the distillery. It takes him and 10 other visitors out to Bently Ranch. Tom, the very friendly and knowledgeable guide explains how all the grains used in every spirit Bently Heritage makes is grown on the ranch. Each non-GMO heritage seed type was selected specifically to pair with the yeast strains chosen, soil type and climate of the area. They have been growing and experimenting with different seeds for years to ensure the right choice for each spirit, as they developed Heritage Bloody Butcher corn, winter wheat, barley and oats.

“No one else is doing this?” George asks.

“That’s correct,” Tom replies, “and it doesn’t stop there. Next stop is the malthouse.”

Once inside the malthouse, they meet Matt the Maltster, one of a very few in the country. Matt oversees the grain processing. There are two large automalters and a huge floor malting room. When the grain is milled and malted, with some smoked for the Whiskey, the grain is sent to the distillery.

“Bently Heritage has feet in two worlds: that of tradition and heritage, and another in the most state-of-the-art processes for making spirits today. Both are necessary to keep culture, quality and intent clearly focused on the best product humanly possible,” Matt explains.

Next, they head out to the rick house where the Whiskey is being aged. The aging is taking place in casks formerly used for Oloroso Sherry from Spain, Port from Portugal, as well as in wine and charred oak from Napa and France, all of which are used to create different flavor profiles for Whiskey, from Bourbon to Single Malt. The casks are stacked in several separate climate-controlled rooms where temperature and humidity are all perfect for aging requirements. “Each room simulates a different climate depending on what’s being aged and what they want from the barrels: cool, or warm and humid ramping temperatures in varying time increments. We leave nothing to chance,” explains Tom.

George is blown away — he has toured distilleries in America, Mexico, Ireland, Japan and Scotland, and has never seen anything like this.

Next, they return to the distillery where George gets a full tour of the distilling operation. In the Creamery distillery, which is in an old creamery, there is a huge Carl 40 column still. Behind it is a continuous column still for Bourbon, and at the other end of the room is a small Carl still. Carlito is the size of most craft distilleries’ main stills and is used for R&D and small batches. On one side of the room are four huge stainless fermenters for neutral spirit, and the other side has four huge wood fermenters for Whiskey. A long hallway leads to the casking and disgorging room, the fully automated bottling line and tanks upon tanks holding finished spirit waiting for barreling or bottling.

Finally, they return to the old mill where George’s day began. He proceeds up an incredible spiral staircase that dissects the whole building for three floors. On the second floor, he sees a bar with friendly bartenders ready to take his order but it’s what’s behind them that grabs his attention. Behind a glass wall in the center of four silos that have been cut out to create a distilling floor are two massive copper Forsyth stills.

“These stills were hand-forged in Scotland,” says Tom. “They are made specifically for Single Malt Whiskey and are what 90 percent of the Scotch producers use in Scotland.” They are works of art and look almost like a movie set, as there are no visible pipes around them. The Bentlys used wineries as their inspiration rather than other distilleries. Wineries are much more beautiful and made to host guests, where distilleries are usually very industrial looking places.

“There was a huge engineering effort to plumb everything below the floor so all you see are these beautiful stills and the wood fermentation tanks behind them,” says Tom. “Beauty was as important as functionality when we were designing this distillery.”

George is blown away again, but now it’s time for him to try a house-made cocktail. The bartenders are fun yet professional; they grasp the concept of hospitality as well, if not better than in most bars George has visited. He quickly learned that they make great cocktails, created only with spirits and tinctures made at the distillery by Bently Heritage.

“This is our twist on an Old Fashioned featuring our Sherry-rested Vodka,” Lucas Huff, bar manager and lead mixologist, explained. “The Bentlys wanted a world-class cocktail experience worthy of the spirits they make.”

George loved Lucas’ Old Fashioned and quickly understood that Bently Heritage is truly world class and was built to produce the finest spirits in the world with honesty and transparency. It is 100 percent estate, beautiful and one of a kind. He made one last stop at the gift shop to buy a bottle of Juniper Grove Gin and the Sherry-rested Vodka before thanking Tom and Lucas for the tour and their wonderful hospitality! 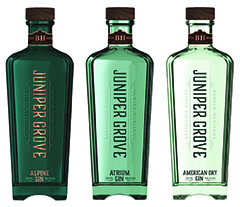