— Not When It Came to Inventory, Cost-Control, or Insights … until Partender

How  Dave &  Buster’s is  Putting the “Fun” into Inventory  to  Drive the Best Guest Experience, Employee Happiness, and Higher Corporate Earnings

Remember your days as a server or bartender? Crazy long hours working doubles, long inventory nights, no potential career path… What made you stay or leave the many industry jobs you may have had? Now, fast-forward to today’s workforce. As an executive, you find turnover is a major issue — we hear all the time that today’s employee pool is different. Why can’t you keep your managers, servers and bartenders? Why are they not doing what you need them to do — what is the real issue?

In our transient industry with a staggering 74.9% employee turnover, Dave &  Buster’s, the brainchild of two entrepreneurs who merged their arcade-bar and restaurant concepts in the early ‘80s, is continuing to create employee loyalty, from bartenders to their COO Margo Manning, who started with the actual Dave and Buster 20 years ago. This culture has been vital for the company’s recent rapid expansion and long-term success. If you get a chance to sneak into their trainings, you’ll see their incredible culture and energy.

Boasting 130 locations and counting, Dave & Buster’s is mastering scale in “Eatertainment” (think Topgolf, SPIN, Punch Bowl Social, Alamo Drafthouse, and AMC’s MacGuffins Bar) with one of their competitive focuses being people. “We live and die by our culture being our differentiator. From day one, our goal has been to get all staff to realize the potential of a real career in this industry with us, provide them the tools and support to perform at their peak in their role, and then push them to grow and stay challenged. Investing in operational efficacy and staff ’s success is a win-win and results in business success,” states Dave & Buster’s Ryan Nowicki, Senior Director, Operations Excellence. From the company’s unique Blue and Orange leadership training program to competitive pay, Dave & Buster’s innovates to attract the best talent, increase retention and empower employees, for the best guest experience and long-term success.

However, no matter how big or small — from Dave and Buster’s and mega-casino resorts to the small businesses and the world’s most popular craft cocktail bars — everyone in this industry suffers from labor shortages and rising costs. Dave & Buster’s knows that to tackle these challenges, especially at the scale of their size, the industry needs to think outside the box.

Amidst the current rising wages, Dave & Buster’s had been looking for ways to cut costs without sacrificing quality. And that’s when inventory crossed Nowicki’s desk. Stores were spending an average of 15 labor hours per inventory on a Bevintel weight-based system and reportedly couldn’t get the support they needed. Corporate almost considered reducing inventory to just once a month. “Inventory is unsexy, so our industry doesn’t give it a second thought, but we realized there had to be a better way,” says Nowicki.

Isn’t it crazy how we count the few hundred dollars in the register multiple times a day, and how just $10 missing from the register can be a fireable offense, but so many organizations only count the hundreds of thousands, if not millions, of dollars in liquid cash just once a month if at all? Everyone wants to count the hundreds of thousands in liquid cash more often — but inventory has always been a long, complicated, inaccurate, and hard process, and the importance of inventory takes lower priority, perpetuating the industry’s loss of $28 Billion in on-premise alcohol sales each year. 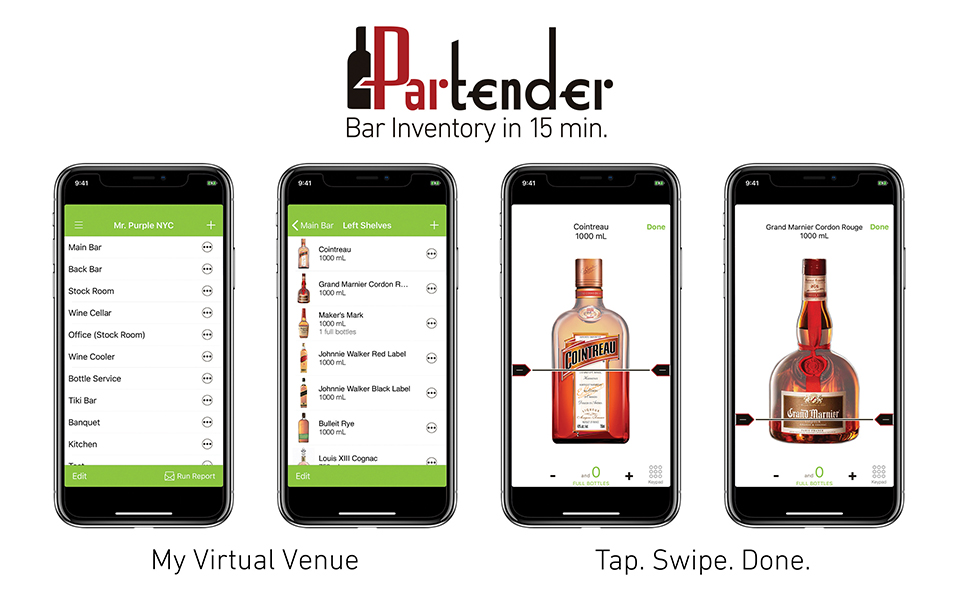 Inventory, Ordering, and Analytics in Minutes: “We never imagined an inventory system this user-friendly. We needed a tool that could easily scale and empower a novice to be a savvy bar manager,” states Dave & Buster’s Ryan Nowicki, Senior Director, Operations Excellence. “Since Partender allows us to count our millions of dollars of liquid cash faster and accurately, we can count it more frequently and make a ton more money.”

Nowicki and his nimble team put out feelers for a beverage inventory solution and found buzz around Partender, both within the organization and externally. Partender’s slick and patented solution promised inventory, ordering, accounting, and trends in minutes, “which sounded too good to be true,” reflects Taylor Bonnewell, Operations Support Specialist, who started as a bartender at Dave & Buster’s five years ago and now leads training and technology as part of Nowicki’s corporate team. Bonnewell goes on to say, “Still, if we could cut inventory time by half and reduces stress, it’d be worth it, and we’d be much better off compared to what we were doing.” Dave & Buster’s decided to pilot Partender at three stores.

With the top three goals of speed, accuracy and world-class support and training, the company also opted for Partender’s new “Onboarding 2.0” Package, which entailed On-Site Implementation, scalable “train the trainer” materials, and high-touch consulting from the Partender National Accounts Team.

After the first Partender On-Site at the Fort Myers store, the staff and corporate were blown away by results.

By the end of the first day of the Partender On-Site in Fort Myers, team members:

– Were trained on the importance of inventory;
– Organized every shelf, well, and rail for faster speed-of-service and faster inventory time (critically important to building the right habits at a New Store Opening);
– Set up the entire Partender system on mobile and web;
– Had all of their pricing audited and corrected by Partender’s team;
– Completed a full 1st inventory with an Instant Value On-Hand and Auto-Suggested Purchase Orders, in less than 45 minutes.

“Kick-off, training, organization, implementation and full inventory with an automatic beverage cost were all completed in less time than it was taking stores to do just one inventory count with Bevintel,” Bonnewell says. “Word traveled fast, and other stores were already starting to ask when they could get Partender.” A month after the first On-Site, Nowicki, Bonnewell, and Vice President of Operations Ed Forler added nine more stores to the original three-store pilot, and loved the impact and immediate ROI of the on-site onboarding so much that they opted for the Partender Onboarding 2.0 Package for each store. “As we rolled out, the stores kept telling us they had their minds blown; we did, too,” reflects Bonnewell.

In fact, Dave & Buster’s top three goals were accomplished during each store’s first day of Partender’s On-Site Implementation, which is included in Partender’s Onboarding 2.0 Package. “We never imagined an inventory system this user-friendly. With the number of units we have, we needed a tool that’s as easy to use as Facebook, and can easily scale and empower a novice to be a savvy bar manager,” states Nowicki.

With beverage inventory for just the 12 stores nearly equaling $500,000 in liquid cash per month, Nowicki and Bonnewell attended the Partender On-Site Implementations as opportunities to deep-dive into how stores currently handle and could improve the management of one of the company’s largest assets.

“When we’d organize the bar and back of house for Partender,” Bonnewell says, “I was surprised by the amount of dead stock and the opportunity to improve, given the high bar we set for our stores. I realize that our staff didn’t have time in the week or a tool like Partender to prompt strategic conversations.” With Partender, stores cut down average inventory time from 15 labor hours to 45 minutes (including recounts, orders, and COGS calculation). She adds, “Now with Partender’s speed and accuracy, stores can do inventory more often, and also get more reliable, actionable, and user-friendly real-time data. With this transparency, managers can course-correct in real time, and also rally all staff, from the barback to the GM, to engage in the beverage program strategy and create a stronger and more profitable operation.”

While Partender integrates with Compeat and several other ERPs, stores are using Partender’s simple-to-use suggested ordering and analytics tools on their own to identify what’s trending and missing in real time, without the standard delay you’d expect for any corporation’s back office team to update and maintain. Partender is selfmaintainable.

Nowicki reiterates and attributes the importance of Partender’s Onboarding 2.0 and On-Site Implementation to the success Dave & Buster’s has seen so quickly. “We’ve celebrated wins from day one of onboarding and beyond, thanks to the Partender team coming on-site. They’ve helped us learn so much we’re not always privy to by being our true partners and providing simple solutions and consulting from day one.” 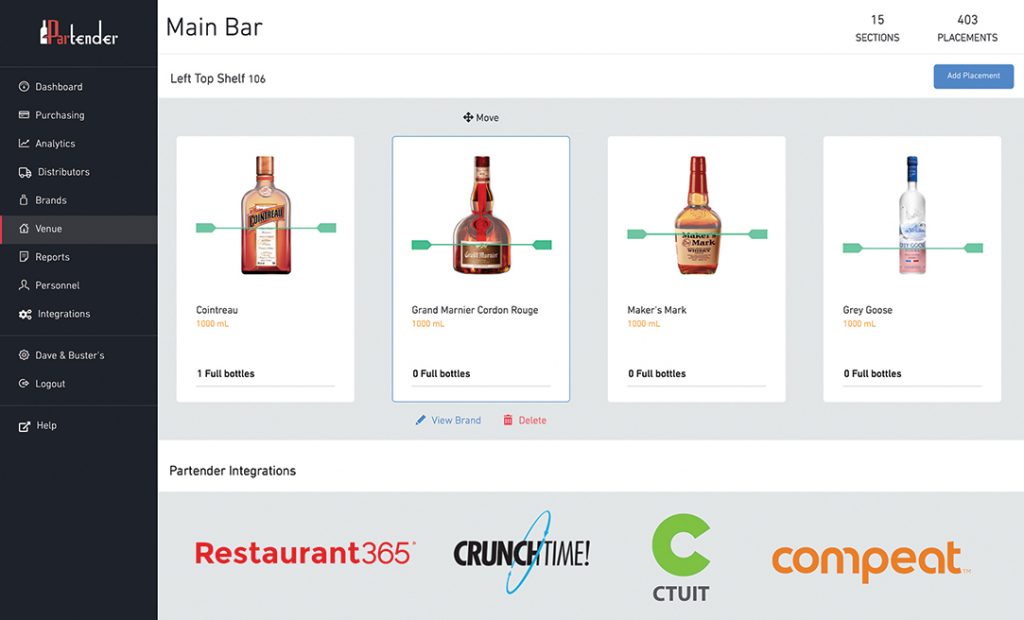 Partender’s Virtual Venue and Portal: Perfect for generating, editing, and placing Suggested Orders, getting real-time alerts when prices change on invoices, and ensuring stores comply to corporate mandates. Also: Easy exporting of data into your back office system!

Since the 12 stores were able to count their $500,000 of monthly liquid cash more often and accurately, Dave & Buster’s experienced additional ROI well-beyond its top three goals for inventory.

In less than three months, by inventorying with Partender, stores:

“When Partender allows us to count our millions of dollars of liquid cash faster and accurately, we count it more frequently, and we get earlier data, increased profits, and can help all stakeholders — from the bartender to regional manager to C-levels executive — make better decisions for the business,” Nowicki summarized. “We went from thinking about scaling back to once-a-month inventory due to time … to some of our stores doing it daily, and in less time overall. That’s incredible ROI.”

With the industry upgrading focus on bar education yet still turning to generalized — and expensive — data sources to revamp menu items and drive training, an innovative food and beverage strategy that is powerful and cost-efficient has become an even greater focus for forward-looking organizations like Dave & Buster’s. Utilizing the new time back from Partender, operators can use its real-time consumer insights from within their own four walls to drive menu innovations that prove ROI (and quickly — with real data), increase employee productivity and retention, and reduce costs, dead stock, and inefficient ordering, all of which increase cash flow to maximize sales and deliver the ultimate guest experience.

To bring it back to our original question: How can we come out on top in an industry with an employee turnover rate just shy of 75%?

Sometimes, it might just be investing in the right tools, workflows, and simplest of solutions for your staff to feel invested, more productive, and happier. 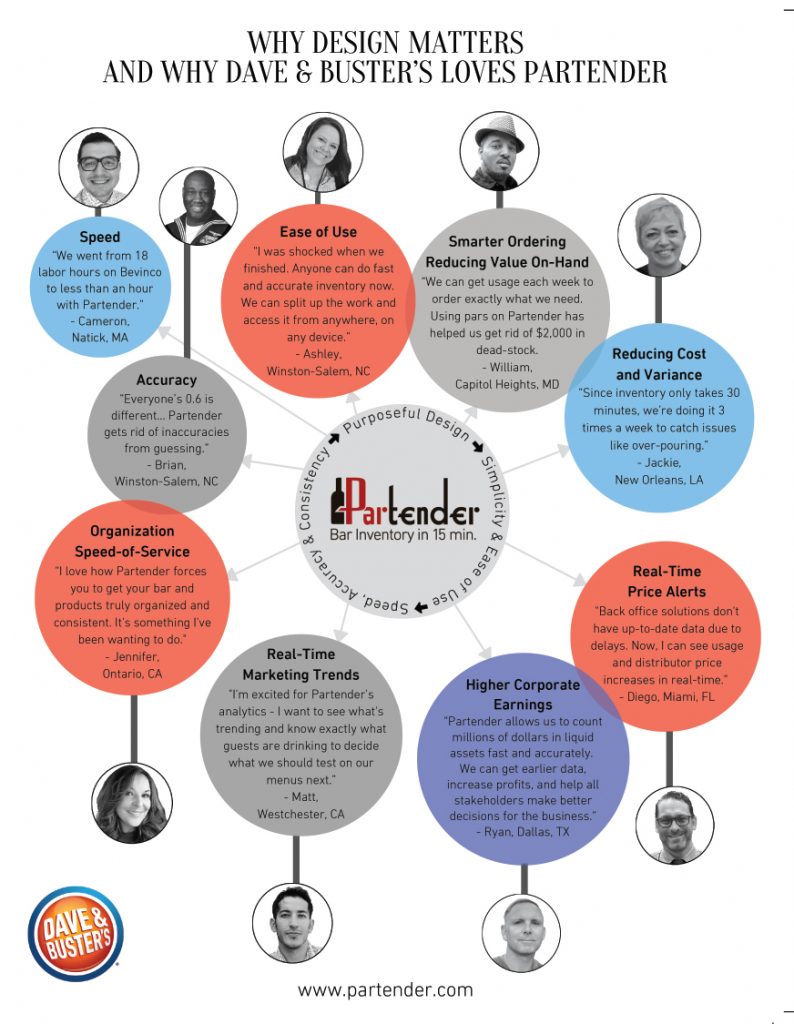