Tablas Creek’s botanical garden for the biodynamic potions they make for their soils and sprays.

This past early June I travelled with seven other Johnson & Wales University wine faculty members to Central California. It all too often gets short shrift in comparison to Napa and Sonoma. Wine has a relatively old history in Paso Robles, beginning with the mission of San Miguel in 1797, followed by Andrew York and the first winery in 1882. While it was formerly known as Zinfandel wine country, much has changed. With over 40,000 acres and 200 wineries, Paso Robles was created as an AVA in 1983 and is taking its place as a leading California wine appellation. In 2013, the TTB finally approved its petitioned 11 sub-appellations, as a reflection of the diversity of climates, soils and altitude, making greater sense of California’s largest AVA of over 614,000 acres. Paso Robles AVA region spreads over 30 miles north to south and over 40 miles east to west, with over 20 inches of rain variation between the west at 10 inches and 35 inches to the east, and a great variation of altitude, which explains the wide spectrum of varieties. Cabernet Sauvignon dominates with Merlot, Syrah and Zinfandel also being significant plantings. Yet, it is the experimentation and plantings of many other Mediterranean and Rhone varieties, such as Picpoul, Roussanne, Marsanne, Grenache Blanc and Mourvedre, Syrah, Grenache, Tempranillo and Counoise, that also bring further differentiation to this region.

We visited a number of wineries that reflected very different approaches to winemaking, beginning with Justin Winery in the Santa Lucia Mountain region, which has vineyards ranging from 900 to 1,500 feet in altitude. As we drove up from the city of Paso Robles, which has changed into a delightfully charming town with great restaurants, we encountered banks of fog that rose from the lower reaches of the valley. The diurnal range during the growing season is 40 to 50 degrees between day and nighttime temperatures, thereby providing longer hang time for flavor and tannin ripeness while preserving some acidity. As many other vineyards do, Justin practices deficit irrigation along its vines so they are appropriately stressed to provide intense fruit expression. We learned about Justin’s uncommon grape sorting machine, which applies an air pulsing system that replaces 85–90 percent of expensive grape hand sorting. We tasted their full range of wines, from the crisp and straightforward Sauvignon Blanc, a delicious and classic Viognier 2016, to their famed robust Isosceles and Isosceles Reserve, and a focused, harmonious Syrah 2016.

This was followed by a visit and food and wine pairing at Daou Vineyards and Winery, half an hour’s drive away. While the Estate Cabernet Sauvignon is best known, the Sauvignon Blanc, Semillon Estate 2018 blend, was excellent with a judicious use of oak. The Adelaida District winery at 2,200 feet has remarkable vineyards on a steep amphitheater-shaped slope. The red blend, sold as “Unbound” 2017, was unusual, juicy and balanced with its use of primarily Petite Sirah, Tannat and Tempranillo. The Mayote 2011 blend of Syrah, Cabernet Sauvignon and Petit Verdot was mouth filling, well-structured but evolved with black fruit and black pepper intensity. Our last tasting wine was their iconic Soul of the Lion 2013, which had intense dark fruit and coffee notes. 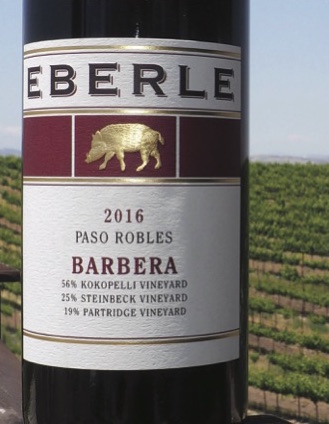 The Daou winery has a spectacular view of the surrounding landscape with the Santa Lucia Highlands in the distance. Cool breezes enabled us to enjoy our tasting and creative, beautifully appointed food dishes al fresco. Daou winery knows how to maximize the wine tourist’s experience with its well-trained, hospitable staff.

Tablas Creek Vineyard is a collaborative venture of Robert Haas, former wine importer, and the Perrin family, owners of Chateau Beaucastel of Chateauneuf-du-Pape in France. The vineyard has been a trailblazer not only for applying biodynamic viticulture but also for introducing Rhone varieties, which now number all 15 used at Beaucastel. Our tasting included their delicious Esprit de Tablas Blanc, a mouth-watering white blend including Roussanne and Grenache Blanc, as well as a bright, light and red fruit aromatic Counoise. Their reds, including the Mourvedre-dominated blends labeled Esprit de Tablas, have a core vibrancy rarely matched by others.

Our next winery visit was to J. Lohr, which is the largest producer in Paso Robles and is located in the flatter landscape just northeast of the city. This large successful winery has a multi-tiered marketing approach, from good value to exceptional wines. J. Lohr can also be credited with leading the drive for environmental and economic sustainability and social equity. They understand, as do others, that the greatest threat to California and specifically to the Paso Robles wine industry, is the lack of water and the state restrictions that will make it more challenging. We enjoyed a number of barrel samples including the value Seven Oaks Cabernet Sauvignon 2015, the Hilltop Cabernet Sauvignon 2015 and the Tower Road Petite Sirah 2016, all of which reflected an emphasis on tannin management.

Our last Paso Robles winery visit was to Eberle Winery, a pioneer from the ‘70s and an iconoclast. His approach is as unpretentious and wine-focused as can be. The Zinfandel and Steinbeck Vineyard Syrah wines especially are balanced and outstanding.

Paso Robles has a diversity of landscape, climate and soils that offer a wide spectrum of very good white, Rosé or red wines. It offers both great value and iconic super premium wines. There is a diversity of wine styles and varietals unmatched by other appellations in California. While water availability may be a challenge, there is an adventuresome and experimental approach that would indicate nothing but Paso Robles’ future continued wine success.