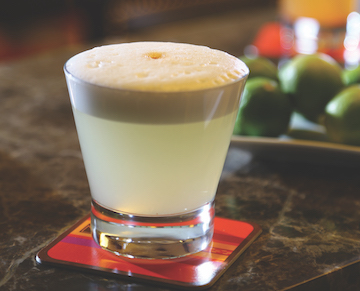 Pisco Sour
Recipe and photo courtesy of Sumaq Machu Picchu Hotel, Aguas Calientes, Peru
Both Peru and Chile lay claim to the ubiquitous unaged Brandy that’s the basis of this tangy, foamy cocktail. But its origins most likely date back to the 16th century near the Peruvian town which bears its name — one that prospered thanks to the vineyards imported by the Spainards. At this hotel, just a short hike from the Inca citadel Machu Picchu, bartenders shake up a classic version using a Pisco Quebranta, a single varietal spirit most commonly used in the drink. “The soil quality, climate, cultivation of the vines and storage in large vessels give Pisco its incomparable flavor and texture,” says bartender Miguel Chacon. Riff on it by muddling passion fruit, mango or kumquat before adding the other ingredients. And to make it vegan, substitute aquafaba, the liquid in a can of chickpeas, for the egg white.

Add the first 4 ingredients to a cocktail shaker, add ice and shake until well-chilled. Strain into a cocktail glass and add 2 drops of Angostura Bitters to garnish, decorating it with a toothpick if you desire. 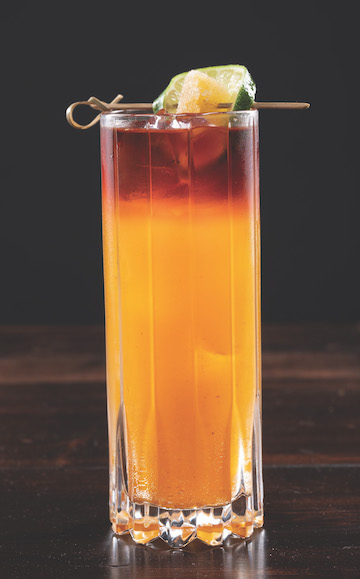 One of only four cocktail names to be trademarked by the U.S. patent office, Bermuda’s national drink was created in the 1920s by the British Navy stationed there, who quickly realized that the ginger beer they concocted to ward off the queasiness brought on by seasickness went swimmingly with the locally-distilled Gosling’s Black Seal Rum. The spicy, fizzy elixir quickly became the most popular thirst-quencher on the island. “Our goal with the trademark is to ensure that consumers enjoy the authentic taste of this Bermudian classic whether they’re ordering at a bar in London, Hong Kong or New York,” explains Malcolm Gosling, Jr. “Lime optional; enjoyment mandatory.” Extra points if you sip one while wearing long pink shorts, though.

In a tall glass filled with ice, add 4 to 5 ounces of ginger beer. Top with the Rum, stir gently and garnish with a lime wedge, if desired. 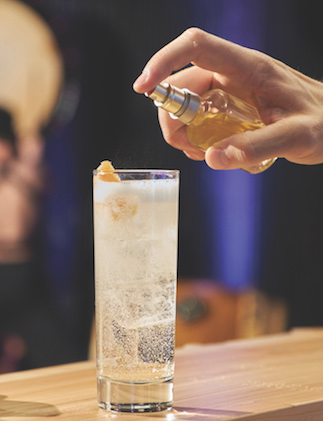 In the 1950s, Shinjiro Torii, the founder of Japanese Whisky company Suntory, promoted Highballs in Japan as a refreshing libation. As they became more popular, bartenders began paying astute attention to details including preparation, serving temperature, ice, carbonation levels and balance. “The Japanese praised this simple, stylish cocktail as a refreshing way to drink Whisky [and] also loved how well it paired with Japanese cuisine,” says senior Suntory Japanese Whisky ambassador Gardner Dunn. With the recent release of Suntory Toki Whisky, the Japanese Highball is more popular than ever, with its execution made even easier using the automated Highball machines in bars and restaurants that dispense chilled Toki and soda water in the right proportions, straight into the guest’s glass. Kanpai!

Fill a highball glass to the brim with ice. Add the Whisky, stir to cool and add more ice to the brim. Add the chilled soda along the side of the glass to avoid melting the ice or bursting the bubbles. Garnish with a lemon or grapefruit twist. 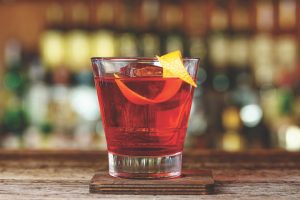 2019 marks 100 years since Count Camillo Negroni asked Fosco Scarselli, bartender at Caffè Casoni in Florence, Italy, to make his beloved Americano more potent by adding Gin instead of soda water. Scarselli also took it upon himself to replace the lemon garnish with orange to show that it was a different drink, and the classic cocktail was born. Today the Negroni remains one of the world’s most popular drinks, gorgeous in its simplicity (equal parts of three ingredients), striking red hue and beautiful balance of bitter, herbal, sweet and boozy. “The culinary tradition of Italy is to create a few things, perhaps seemingly simple, and then spend over a century perfecting them,” says Anne Louise Marquis, Campari America National Portfolio Brand Ambassador. “The Negroni became closely associated with Italy around the world because it seems to embody the country itself.” For an even more nuanced dimensional variation, replace regular Gin with barrel-aged, or swap out Campari for new Campari Cask Tales, which is finished in Bourbon barrels to lend it subtle spiciness, oaky smokiness and creamy tones.

Add the first 3 ingredients to a rocks glass over a large ice cube; stir and garnish with an orange peel. 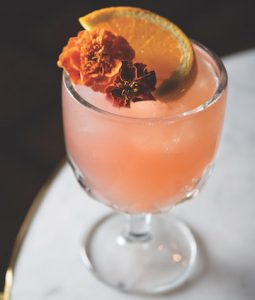 The “veddy British” tipple, the Pimm’s Cup, is made with Pimm’s No. 1, a Gin-based liqueur that’s reddish brown in hue and tastes of spicy and citrus. It is served over ice mixed with lemonade and various garnishes including cucumbers, apples, oranges, lemons, strawberries and mint. “The Pimm’s Cup is just about as English as it gets — you can even buy them from vending machines in some U.K. hotels,” Castro points out. “That is when I knew that the English don’t want anything standing in the way of enjoying a Pimm’s Cup when needed.” His riff uses lighter summer fruit and flavors that are playful and lighter on the palate.

Add the raspberries to a cocktail shaker and muddle gently. Add the rest of the ingredients except club soda and garnishes; add ice and shake until well-chilled. Strain into a Collins glass over fresh ice, top with club soda, stir gently and garnish with the edible flower and orange slice. 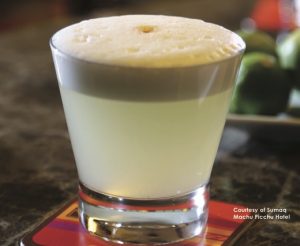 Legend has it that this cocktail was created when Ernest Hemingway walked into Floridita Restaurant and Bar in Havana, Cuba and asked bartender Constantino Ribalaigua Vert to make him a Daiquiri made with no sugar and double the Rum. A few years later, Floridita bartender Antonio Melian tweaked the recipe to add the maraschino liqueur and grapefruit juice, and it became known as the Papa Doble. This one uses a Rum brand based out of Key West that’s an homage to the renowned author’s nautical adventures between Florida and Cuba on his boat, Pilar. “Papa was larger than life … a man who made bold choices and stuck to his strong decisions,” says Papa’s Pilar Rum Advocacy and Events Manager Andy Borbely. “The Papa Doble made to spec is still quite tart, [yet] it’s a fun cocktail to explore because so many versions of the story have been told, authenticated, debunked and brought back to life.”

Add all ingredients except garnish to a cocktail shaker, add ice and shake until well-chilled. Strain into a chilled cocktail glass and garnish with the grapefruit wedge. 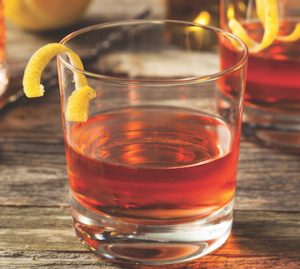 The Sazerac was the world’s very first branded cocktail, created in New Orleans in 1850 with French Brandy and Peychaud’s Bitters and crafted by apothecary owner Antoine Amedie Peychaud. In 1873, the recipe was altered to replace the French Brandy with American Rye Whiskey and a touch of Absinthe was added. The official version changed again in 1940 to substitute Herbsaint for Absinthe, and Sazerac Kentucky Straight Rye Whiskey became the official base spirit in 2000. “The Sazerac cocktail and its roots are deeply entrenched in New Orleans,” says Sazerac Senior Marketing Director Kevin Richards. Not only do the booze and bitters have local origins, the sugar is a nod to Louisiana’s legendary crop and even the lemon garnish pays homage to the Sicilian population who immigrated in the early 20th century. “From the ingredients to the rich history the cocktail has enjoyed for over 170 years, New Orleans is the soul of this great classic cocktail,” Richards says.

Pack an Old Fashioned glass with ice. In a second Old Fashioned glass, place the sugar cube; add the Peychaud’s Bitters and crush the cube with a bar spoon. Add the Rye Whiskey to the second glass with the sugar and bitters. Empty the ice from the first glass, pour in the Herbsaint, swirl to coat and pour out the remaining Herbsaint. Empty the Whiskey, bitters and sugar mixture from the second glass into the first glass, and garnish with lemon peel. 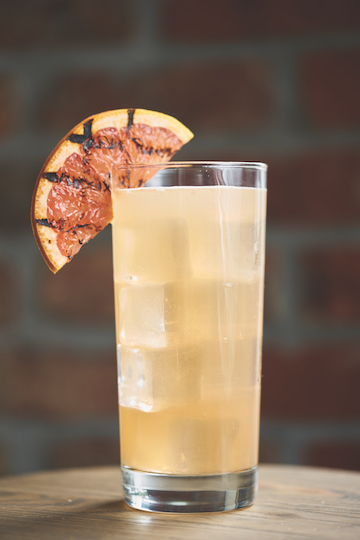 The name of this drink translates to “dove,” and it’s actually the Paloma, not the more expected Margarita, that is the most popular Tequila-based drink in Mexico. As with much booze lore, its origins are unclear but it is thought to have been first created by Don Javier Delgado Corona at La Capilla, a bar in Jalisco in the town of (what else?) Tequila. The original Paloma includes grapefruit soda and Tequila over ice. That’s nice, as is this take, which is sweetened with a ginger sage syrup and garnished with a grilled grapefruit slice. Mix things up next Cinco de Mayo by making it your go-to party cocktail.

Add the first 4 ingredients to a cocktail shaker, add ice and shake until well-chilled. Strain into a highball glass filled with ice and top with grapefruit beer. Stir gently to combine and garnish with the grilled grapefruit slice and sage sprig.

For the ginger sage syrup:
Combine ½ cup water and ½ cup white sugar with 2 peeled ¼-inch-thick ginger slices and 4 sage sprigs. Bring to a boil, reduce to a simmer until sugar dissolves, and remove from the heat. Allow to steep for 20 minutes or until flavor is achieved, then strain out solids. Store in the refrigerator for up to a week. 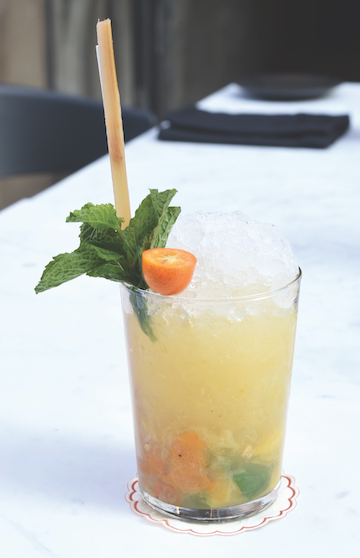 Muddled Cachaça, lime and sugar — Brazil’s national cocktail is just as often sipped on the beaches of Rio as it is in the clubs of Copacabana. Michael Lay, Bar Director at Bon Temps, wanted his Caipirinha to be fresh, delicious and straightforward, with a twist, so he added tangy kumquats and tamarind. “It is connected to Brazil’s essence in a deeper way, in that it is drunk everywhere and by everyone, across social class and experience, but it grounds Brazilians to their rural roots in sugarcane,” says Peter Nevenglosky, co-founder of Avuá Prata Cachaça and founder of Drifter Spirits. “At its core it marries acid, sweet and alcohol: a local fruit — whether lime, passion fruit, or others — with raw cane sugar [and] the earthiness of Cachaça.”

Muddle kumquats, lime wedges and sugar in the bottom of a cocktail shaker. Add Cachaça, tamarind syrup and ice, and shake until well-chilled. Dump the contents of the shaker into a large rocks glass and garnish with the kumquat and mint sprig.

For the tamarind syrup:
Combine ⅛ pound tamarinds (removed from pods), 1 cup water and 1 cup sugar in a small saucepan. Bring to a boil, reduce heat and simmer for 10 minutes. Remove the mixture from the heat; let steep for 10 minutes. Strain out solids and store the syrup in the refrigerator for up to a week.

Kelly Magyarics, DWS, is a beverage, food, travel and lifestyle writer in the Washington, D.C. area. She can be reached through her website, www.kellymagyarics.com or on Twitter and Instagram @kmagyarics.