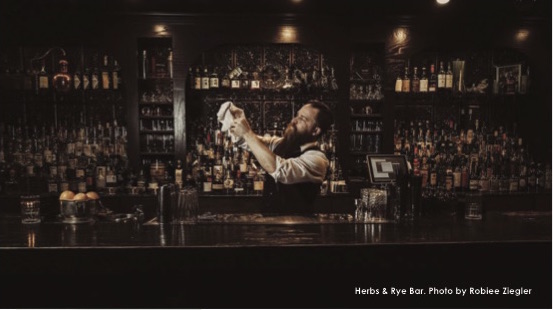 “Now is the time for all good barflies to come to the aid of the party, since Erskine Gwynne crashed in with his Boulevardier Cocktail: 1/3 Campari, 1/3 Italian Vermouth, 1/3 Bourbon Whisky.”

George was back in Las Vegas and had a night to kill before his conference began. Since he just got word that his friends at Herbs & Rye had won a Spirited Award for Best Bar Team at this year’s Tales of the Cocktail, he decided to stop by and congratulate Nectaly and his crew. He arrived at Herbs & Rye just after 6:00 p.m.but the joint was already jumping and there were only a couple of seats available at the long bar. He just got seated when Nectaly spotted him from behind the stick and quickly approached him with a warm and welcoming embrace.

“George, welcome back. So good to see you, my friend!” Nectaly said.

“Hey Nectaly, great to see you. I’m just back in town and wanted to say hello and congratulations on the Tales Spirited Award!” George replied.

“Thank you very much but that is all on our team. They are the ones that make it happen every night. What are you drinking?” Nectaly inquired.

“It’s a great honor and I know you’re very proud, and you make Las Vegas very proud! I’ll have one of your fantastic Negronis, please,” he requested.

“Have you ever tried a Boulevardier?” the gentleman seated next to George asked. “It’s basically a Negroni but you substitute Bourbon for the Gin.”

“No, I have not, but it sounds wonderful.I’ll try one next,” George answered, taking a sip of his Negroni. “My name is George.”

As the drinks were being prepared, Bobby explained to George that the drink was allegedly created at Harry’s New York Bar in Paris in the 1920s, and was the signature drink of writer Erskine Gwynne. Gwynne became the editor of a monthly publication called The Boulevardier, and the drink first shows up in Harry’s 1927 book, Barflies and Cocktails.

George found the drink to be the perfect combination of sweet and bitter in textbook balance, supported by the richness of the Whiskey.

“I love the Knob Creek Single Barrel in the Boulevardier because at 120 proof, it really buoys the Campari and Sweet Vermouth,” Bobby explained. “I’m headed to Kentucky next week with Tony from Libertine Social to pick out a Single Barrel for their latest project, Highlands & Hearth at the Renaissance Center in Detroit. You should join us.”

“Wow, really? I would love that, but I wouldn’t want to impose,” George replied.

“No imposition at all. It’ll be fun and you might even get to meet Jim Beam’s great-grandson, Fred Noe!” Bobby countered.

That Monday, George found himself on a plane headed to Kentucky to help select a Single Barrel of Knob Creek destined for a new restaurant scheduled to open later in the year in Detroit, Michigan, with people he had never met before—isn’t life wonderful! He arrived at the Louisville airport where he was to meet up with Bobby G and drive together to the distillery, where they would be staying at the Knob Creek House.

“Hey,George, welcome to Louisville!” Bobby greeted him at the luggage claim.

“This is very cool!” George proclaimed, after checking into the Knob Creek house, which would be their home for the next two nights.

“I know,” said Bobby.“We are very lucky it was available.”

Lunch was at Fred’s Smokehouse where they feasted on BBQ pulled pork sandwiches complete with homemade coleslaw, baked beans and some of the best sweet tea he had ever tasted. After lunch they had some free time, so they checked out the gift shop where George discovered “Old Tub,”a bottled-in-bond Bourbon that is only available at the gift shop, and he purchased two bottles. 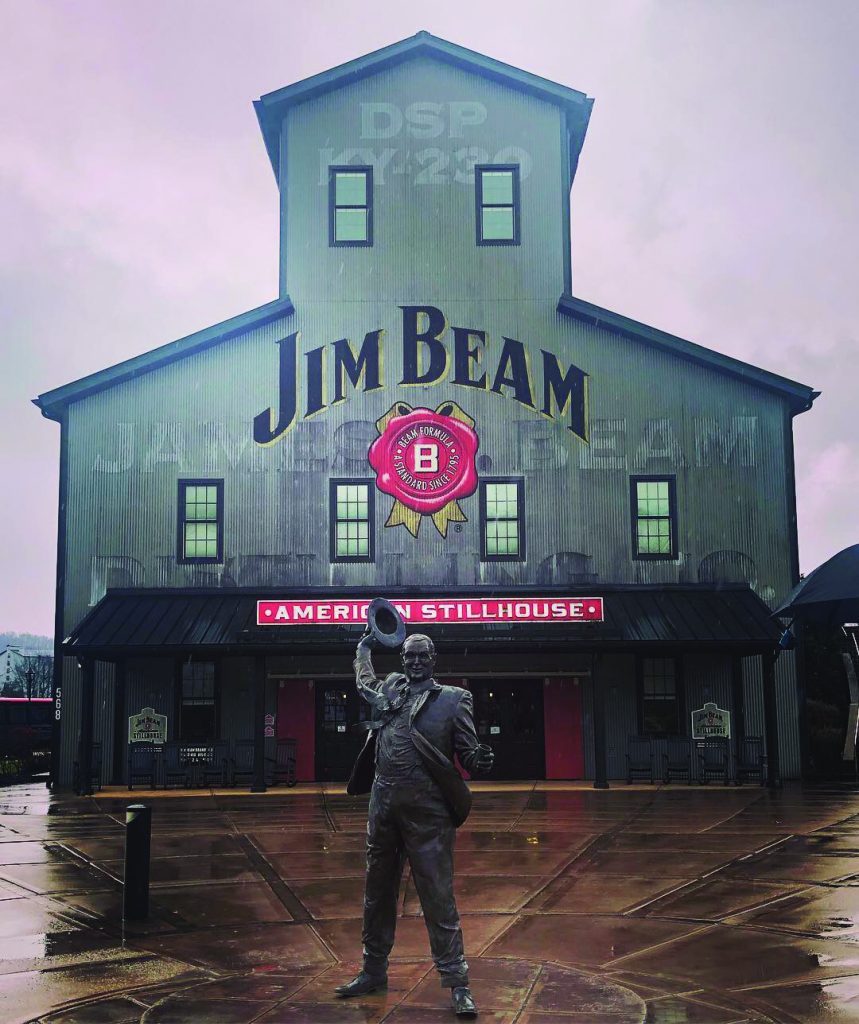 It was now time to meet Grant, who would transport them to the rick house where they were to meet up with Tony and the rest of the Beam team from Michigan, to pick out their barrel. When they arrived, introductions were made and there were three barrels already selected to be tasted, with one of them headed to Michigan. Grant explained that these three barrels were all chosen to become Knob Creek Single Barrel and it was up to everyone —well, mainlyTony —to select the one to be featured at Highlands. He then showed us how to remove the bung from each barrel using a wooden mallet; and, using a wine, or in this case a Whiskey thief, he drew samples from each barrel and put them in front of each of them. No information on age or alcohol proof was provided beforehand to ensure the tasting was done solely on the contents of each glass.

“So, what do you think?” Tony inquired.

“Well, they were all wonderful and all very, very different,” George answered. “I found barrel R to have wonderful notes of caramel, butterscotch, toffee, vanilla and roasted nuts, followed by bright tree fruits and sweet orange, with a long and memorable finish. I would say that was my favorite!”

Grant then let everyone know that Barrel R came from the third floor of warehouse E, Rick 13, Tier 2 and went into the barrel on January 31, 2008, which makes it just over 11 ½ years old. He also informed them that the proof was 123.9, so very little water would need to be added to get it to the bottle strength of 120 proof.

Tony thanked each of them for participating in the barrel selection and invited everyone to Highlands & Hearth for an Old Fashioned made with the Whiskey they all helped him select. He then said his goodbyes, as he had a flight to catch later that evening. Bobby G & George headed back to the Knob Creek House to relax, have a glass or two of Whiskey and play some cribbage before meeting Fred Noe and his wife Sandy, for dinner.

Bobby and George arrived early to the Rickhouse Restaurant in Bardstown, so they bellied up to the bar for a pre-dinner apéritif.

“Hello and welcome to the Rickhouse. Do you know what you would like to drink?” asked the young lady behind the bar.

“Not sure I know that one,” the bartender replied.

“Bourbon, bitters and ginger ale over ice in a tall glass,” Bobby replied. “Make it with Baker’s Bourbon, please.”

Just then, Fred Noe and his wife, Sandy, walked into the bar. Bobby jumped to his feet, gave both Fred and Sandy a big hug and proceeded to make the introductions.

“Fred, Sandy, I would like to introduce you to my good friend,George.”

“Very nice to meet you,” Fred exclaimed. “What are you drinking?”

“Oh, I know what it is. It’s Bobby’s drink,” Fred smiled. “We’ll have a couple ofKnob Creek Whiskies over ice, please,” Fred asked of the bartender, as they were being led to their table.

“So, you came down to pick out a barrel of Knob Creek Bourbon?” Fred inquired. “How did it go?”

“Well, I came along for the ride. Bobby invited me. The barrel was being selected for a new restaurant in Detroit called Highlands & Hearth,” George explained. “But it was an amazing experience!”

Just then, the waiter approached their table to take their dinner order. George started with the Rickhouse Shrimp & Grits, which was comprised of homemade grit cakes covered with their 11-cheese sauce, shrimp and country ham. He followed that up with the 24-ounce bone-in pork chop, topped with Bourbon apricot chutney, and a side of macaroni and cheese, and another BBG. Apparently, a man works up quite a hunger when selecting a barrel of Bourbon.

“So, tell me a little more about the Knob Creek Single Barrel program,” George asked. “I have never heard of anyone buying a whole barrel before.”

Fred replied, “Well, the program started around 2011. Our main goal was to be as transparent as possible and to make a great experience for the customer that comes to Clermont to pick a barrel. We put barrels that vary in flavor in the selection process; this is achieved through having barrels from different storage locations. We have barrels from different houses and different floors to make sure the customer can have different taste profiles to select.”

Continuing, Fred said, “The barrels are usually a little older than the standard Knob Creek and the yield is whatever is left in the barrel after aging, so there is no way to know the exact number of bottles until all the liquid is dumped from the barrel and it is processed for bottling. I feel our experience lets the customer go into the warehouse and thief the Whiskey straight from the barrel they are possibly purchasing.”

“That’s exactly what we got to experience today,” George added. “It was incredible!”

“I hope every customer that comes here to Clermont has a great experience and they have some cases of damn good Bourbon or Rye when they leave here,” Fred concluded.

Dinner ended with a plate of Chocolate Bourbon Bread Pudding and a final glass of Bourbon. George thanked Fred and Sandy for a lovely night, an amazing meal, and a newfound understanding and appreciation for Knob Creek Bourbon. It was now time for bed, as Bobby had a big day planned for tomorrow consisting of a visit to Maker’s Mark and the place that makes the barrels for Knob Creek, Independent Stave Company.

George was blown away by his time in Kentucky, and thanked Bobby G for his generosity and hospitality in including him on this trip. He promised to meet Bobby in Detroit at Highlands to share an Old Fashioned made with the Whiskey they all personally selected. 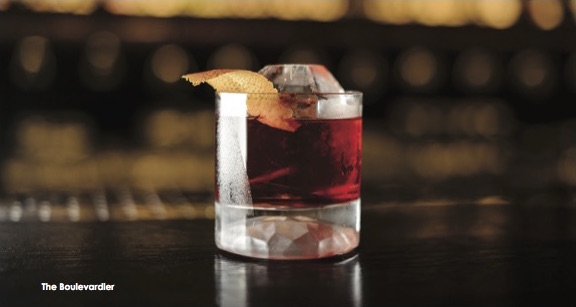 In an ice-filled mixing beaker, add Knob Creek, Campari and Sweet Vermouth; stir until well chilled. Strain over a single, large cube of ice in an Old Fashioned glass. Garnish with a swath of orange peel.