Ask someone what White Claw is, and they’ll probably know the answer — they may even cite some memes (“Claw is the Law,” anyone?). If you’d asked someone about White Claw or the myriad spiked seltzers just a year or two ago, though, you’d have likely been met by cricket chirps. Although seltzers have been around for a while (just think of the LaCroix craze), following on the heels of sparkling water is spiked seltzer, which has become a summertime phenomenon. Many media sources dubbed last summer, for instance, as “the summer of White Claw,” since it was essentially the poster child of refreshing drinks. And in fact, according to Datassential’s MenuTrends tool, which tracks thousands of U.S. and global menus, spiked seltzers seemingly came out of nowhere. Right now, spiked seltzers are on 1 percent of menus, which may not seem earthshattering but is significant given it wasn’t on any menus circa 2016 (plus, spiked seltzers have been largely a retail trend). In our recent fall 2019 issue of TIPS, we found that 55 percent of consumers are aware of spiked seltzers and over a third say they’re likely to purchase them at retail or a restaurant. 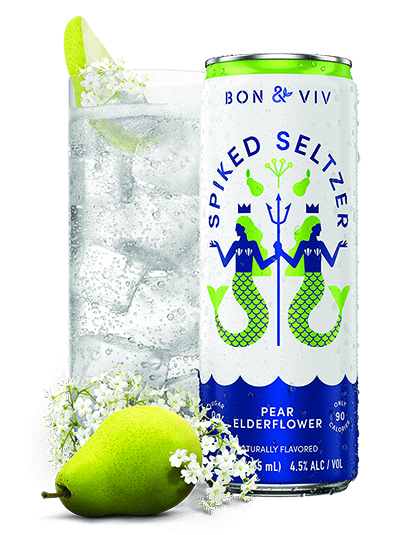 A Spike in Spiked Seltzer SKUs

Because of the rapid growth of spiked seltzers, they might seem like a “flash in the pan” type of trend, but spiked seltzers have shown staying power due to their ability to encompass multiple overarching industry trends. One such trend is better-for-you eating and drinking, which has led some consumers to search for low, or even zero percent, ABV beverages. Spiked seltzers are generally touted as refreshing alcoholic beverages that won’t weigh people down — most hover just around 5% ABV, have fewer than 100 calories per serving and contain little-to-no sugar. Although Mark Anthony Brands (the same company behind Mike’s Hard) debuted White Claw in 2016, after its sudden rise last summer, several other companies have jumped on the seltzer train, filling up store shelves with a variety of options. Companies solely dedicated to spiked seltzers have come into the picture, like Bon & Viv, which offers flavors such as pear-elderflower and prickly pear, two combinations that are certainly more Inception-level for beverages on Datassential’s Menu Adoption Cycle (MAC) framework.

On the opposite end of the MAC spectrum is Ubiquity, which includes more-commonly found flavors and ingredients like Lemon Lime. These flavors are also an option with Bon & Viv spiked seltzers and are on over 20 percent of alcoholic beverage menus, according to Datassential MenuTrends. A variety of other alcohol companies have expanded their product line, branching out from beers to spiked seltzer. Back in September, America faced a White Claw shortage, opening the door for others to seize the seltzer opportunity. Four Loko (yes, that Four Loko) last year teased that it was creating a hard seltzer that would be 14% ABV — way higher than any of its spiked seltzer brethren — before debuting a black cherry flavor with a slightly lower ABV. However, it’s still higher than most, at 12 percent. Natural Light, aka Natty Light, also launched a line of seltzers with flavors like Catalina Lime Mixer and Aloha Beaches.

If spiked seltzers keep on their current trajectory, consider whether your operation could benefit from taking advantage of existing equipment to snag a piece of the seltzer business. For example, Platform Beer Co., a craft brewery in Cleveland, has broadened its range of beverages with the addition of its Seltzer Project seltzers in flavors like Blood Orange Yuzu and Grapefruit Tangerine. According to Platform’s Vice President of Sales, it was “hard to ignore the growing popularity of hard seltzers,” and the company even found that it already had most of the equipment it needed to expand into seltzers.

There’s certainly a level of convenience when it comes to serving spiked seltzers in bars, something operators told Datassential was a plus for stocking spiked seltzers. Similar to serving canned or bottled beers, staff simply have to grab a flavor and open — even a glass of ice is optional — thus reducing the labor of making a cocktail. According to our data, nearly 40 percent of operators view spiked seltzers as a long-term trend, with one saying that it would give consumers the impression they were “remaining on-trend” and that serving seltzers is “very low labor as opposed to mixing a house cocktail.” And even though they can be served straight up, with a glass or with a simple garnish, spiked seltzers are versatile enough that they could be used in more ways than just the obvious. Just as regular seltzers are often used as drink mixers, why not use White Claws or Trulys in cocktails?

Though low- and no-alcohol beverages are trending currently (so much so that we wrote a whole issue about them in Creative Concepts: Spirit-Free Concepts), the truth remains that alcohol is still very much in. Although 29 percent of consumers are interested in low-ABV options, the majority of consumers (70 percent) remain alcohol connoisseurs. So for consumers who aren’t completely sold on low-ABV, bartenders could opt to amp up cocktails with the addition of spiked seltzer. BuzzFeed is all about the idea, too, and last year published an article titled “PSA: You Should Really Be Making White Claw Cocktails,” providing recipe ideas for everything from White Claw Palomas to a spicy margarita that brings an extra punch of alcohol and a little fizz into the mix with Lime White Claw. Both consumers and operators will also soon have even more options when it comes to spiked seltzers to serve and add into mixed drinks. Constellation Brands, for example, is currently in the midst of a $40 million marketing push toward launching Corona Hard Seltzer; according to Beverage Daily, it’ll be the company’s biggest-ever single brand investment. Their new hard seltzer will come in flavors like mango, cherry and blackberry lime.

This article has been provided by Renee Lee Wege, Senior Publications Manager at Datassential, a leading consulting firm and supplier of trends analysis and concept testing for the food industry.