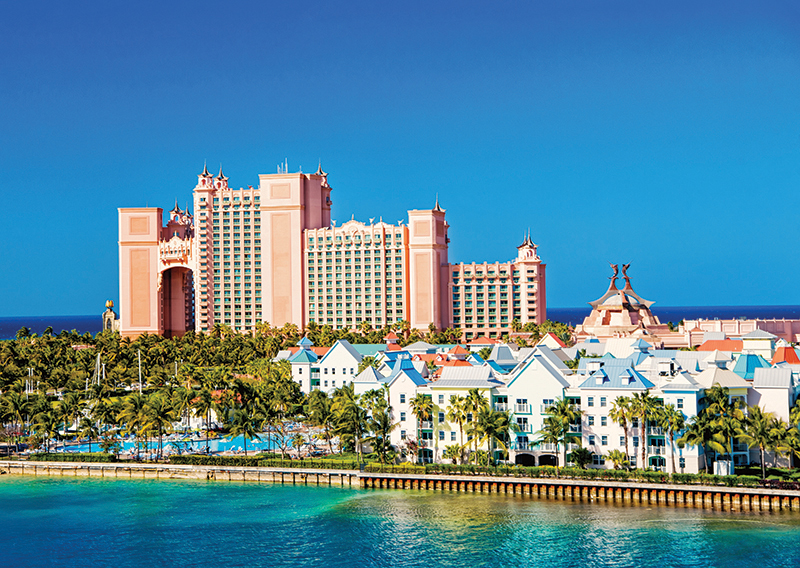 George had a couple of days planned in Las Vegas before his much-anticipated trip to the Atlantis Resort on Paradise Island, Bahamas. So, with a little free time on his hands, George decided to do what he loves to do the most, and that is to visit some of his favorite bartenders and watering holes. Since a tropical location was in his near future, he thought nothing would be better than visiting his good friend Adam at Golden Tiki for a little pre-trip inspiration. George walked through the front door and once his eyes adjusted to the lighting, he felt as if he had been magically transported to the South Pacific. From the thatch roof, hula girls and Menehune, to Don Ho blaring from the speakers, this joint resonates authentic tiki at its best. After grabbing a seat at the end of the bustling bar, George was presented with a cocktail menu and a glass of water. He watched the bartenders feverishly preparing exotic libations while appearing to be having a wonderful time doing so. Just as George was about to order, he spotted Adam heading in his direction.

“George, how are you, my friend? Welcome to town!” Adam greeted him with a warm smile and a handshake.

“I’m just here for a couple of days and wanted to stop by to say hello and get prepared for my trip to the Atlantis, Tiki style,” George replied.

“The Atlantis … nice, lucky guy! So, what are you drinking?” Adam inquired.

“I was thinking about a Suffering Bastard, unless you want to suggest something.” 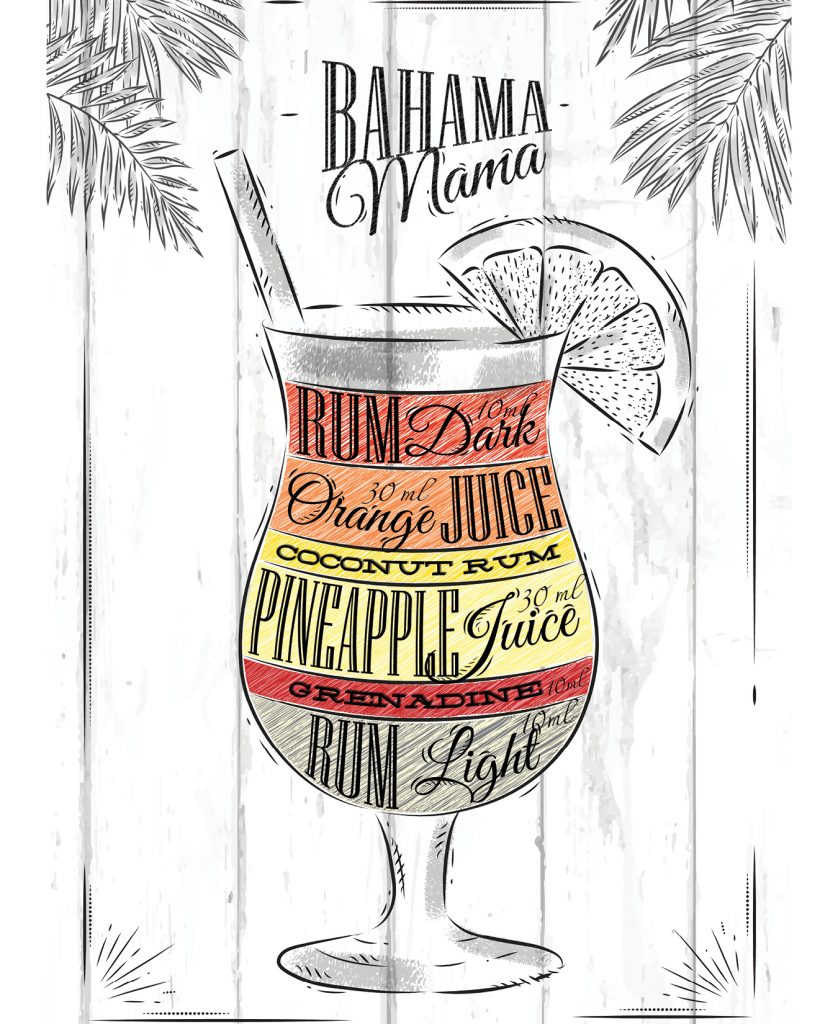 “Well, that is a great drink but if you’re headed to the Bahamas, you have to have a Bahama Mama!” Adam recommended.

As Adam prepared his drink, George continued to peruse the menu, which contained a wide variety of tiki classics, from the well-known Trader Vic’s Mai Tai, to staples such as the Painkiller, Navy Grog and 3 Dots & A Dash.

“Here you are,” Adam presented him with his drink. “With its multiple versions with different ingredients, a varied and contested origin story, a name that rhymes, and the fact that it packs a wallop, the Bahama Mama has all of the elements of a great cocktail!”

With his first sip George picked up the coconut Rum and pineapple juice immediately, followed by the complex layers of the varying Rums, and then just the memory of coffee, which added a new layer to this intriguing tropical tipple. “Wow, that’s really good, and I see what you mean about it packing a wallop!” George exclaimed.

“We don’t serve them a lot but when called for, we try and bring the goods,” Adam responded. “Can I fix you another?”

George felt the Rum warming his insides as Don Ho played and visions of palm trees and sandy beaches raced through his mind. Just then, he was brought back to reality as Adam delivered his second and final Bahama Mama. “Thanks, Adam. You can bring me my check. I have an early flight tomorrow and two of these is definitely my limit!” George said.

After a full day of travel, George was excited to arrive at the Atlantis, check into his room at the Royal Tower, drop off his bags, freshen up and head straight to Plato’s for what would be the first of many Bahama Mamas. George found himself a seat at the beautiful Plato’s lobby bar and quickly spotted the drink he was after on the menu. “I’ll have a Bahama Mama, please,” he requested of the bartender. George watched as the bartender prepared his drink, garnished it with a fresh wedge of pineapple and a cherry, and placed it in front of him with a big Bahamian smile.

“Thank you,” George replied. “I’m here to learn all about the Bahama Mama, so what can you tell me?”

“Well, it was created here and has become quite a Bahamian favorite,” the bartender explained. “But if you really want to know about the drink you need to talk to Michael, our VP of Food & Beverage. Let me introduce you.” The bartender excused himself but quickly returned with another gentleman he introduced as Michael MacDonnell.

“Nice to meet you, George, and welcome to Paradise!” Michael greeted him. “So, I understand you are interested in the recipe and history surrounding the Bahama Mama.”

“Yes indeed, and I must say yours is delicious,” George responded.

“We use three different Rums, including a coconut and over-proof Rum, along with Tia Maria, fresh orange juice, pineapple juice and the must-have grenadine syrup,” he explained. “Be careful, as they do pack a punch.”

“So I am finding out,” George agreed. “It seems like there are a lot of different recipes for the Bahama Mama out there.”

“Boy, are there — mainly in the choice of rums. Most use an aged Rum, and then fortify it with a 151 proof and always a coconut Rum. Some add a little coffee liqueur, which I like as we feel it gives it another layer of complexity. There is always pineapple juice and most also use orange juice; others use lemon, but always, at least on the Island, grenadine syrup,” Michael explained. “If you want to learn more about the drink, check out a part of Nassau called the Fish Fry for lunch. Also, try and track down a bartender by the name of Oswald Greenslade. He last tended bar at the Poop Deck restaurant and is the alleged creator of the Bahama Mama.” 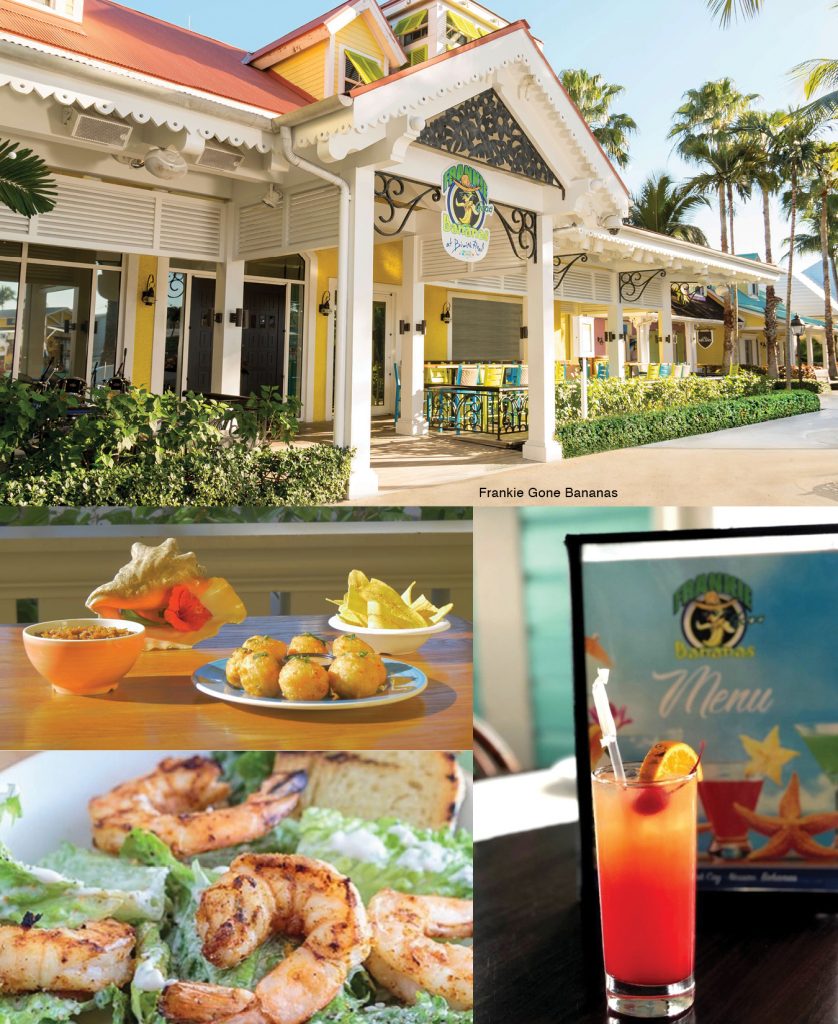 George thanked Michael for his time and invitation for dinner the following night, paid his bar tab and headed to his room for a little in-room dining, as he was beat from his long day of travel. Before turning in, he called the Poop Deck and learned that Oswald had retired but that he agreed to meet with George at the restaurant in two days’ time and bring him a copy of his book.

George was up early the next morning, excited to check out the Fish Fry for some fresh fish and cracked conch. After a light breakfast, he arranged for a car to take him into town and drop him off at the Fish Fry, where he quickly located the Twin Brothers restaurant. As it was still early, the restaurant was rather slow and he was able to grab a table on the outside patio. He ordered the cracked conch, followed by a grilled red snapper and a Bahama Mama. He found the cracked conch to be fresh and perfectly deep fried, but the Bahama Mama was way too sweet and really screamed of pineapple juice and grenadine syrup. When the waiter brought his snapper, George ordered himself a Kalik beer, a local lager, which went very well with the grilled fish. Happy and full, George headed back to the Atlantis for a much-needed nap, as Michael had invited him to join them for a traditional Bahamian dinner at Frankie Gone Bananas.

George met Michael and his beverage team at Frankie Gone Bananas located at the Atlantis later that evening for dinner. Their meal started with conch fritters and cold Kalik beer, followed by local specialties such as cracked conch, fried whole red snapper, jerk chicken and fresh local lobster tail accompanied by signature island staples: peas and rice, mac and cheese and fried plantains. These were accompanied by another traditional Bahamian cocktail the locals call “Sky Juice,” a blend of Gin, coconut water and sweet milk with ground cinnamon. Dinner ended with Rum cake, coconut ice cream and glasses of a John Watling’s Rum, which was produced especially for the Atlantis and finished in Sherry casts. The crew was headed out for after-dinner drinks but George was exhausted, so he thanked Michael and his guests for a wonderful evening and retired to his room for the night.

The next day, George decided to walk to the Poop Deck for his meeting with Oswald Greenslade, which meant walking across the bridge from Paradise Island to Nassau. Mike had recommended a restaurant named McKenzie’s for lunch, which was located under the bridge and rumored to have the best conch in Nassau. George pulled up a stool and looked at the menu, deciding on the conch salad to start, followed by the grilled grouper.

“So, how do you make your Bahama Mamas?” George inquired of Sabrina, the lovely young barmaid.

“We use Bacardi Gold Rum, Ricardo Coconut Rum, grenadine syrup, and orange and pineapple juices,” she replied. “Ricardo is the best coconut Rum; it’s made here in the Bahamas.”

George found the conch salad to be amazing — so fresh with just the right amount of spice and citrus, which worked really nicely to balance the sweetness of the Bahama Mama. The grouper was also wonderful, having been freshly caught and simply grilled. After his fantastic lunch, George thanked Sabrina and decided it was time for the short walk to the Poop Deck.

George walked up a flight of stairs leading to the entrance of the Poop Deck and there, sitting alone at the bar drinking what appeared to be a highball of some type, was a gentleman George knew must be Oswald Greenslade. “Oswald Greenslade?” George inquired, extending his hand.

“Yes sir, and you must be George,” he replied, extending his hand to shake George’s. “Nice to meet you.”

“So, I came all the way from Las Vegas to meet you. I understand you are the bartender who invented the Bahama Mama,” George began.

“I created the Bahama Mama in 1963 at the Pink Elephant Night Club,” declared Oswald. “I named it after Maureen Duvalier, who was a Bahamian cultural icon and hailed as a pioneer of Junkanoo. She was known as Bahama Mama.”

“So, just how did you come up with the recipe?” George queried.

“Well, a couple came in asking for a new drink so I mixed some 151 proof Rum with pineapple and orange juices, grenadine and a float of Dubonnet. They liked it a lot,” Oswald explained. “After that, the drink became popular but we couldn’t get any more Dubonnet, so that’s when I substituted the Ricardo Coconut Rum.”

“So, what about the addition of coffee liqueur? That seems to show up in a lot of the Bahama Mamas I’ve had,” George continued.

“My drink never had coffee liqueur in it, but you know how bartenders like to fiddle with recipes — add this, change that — so some added Nassau Royale and maybe bartenders were looking for something to replace that after they stopped making it,” Oswald explained.

George thanked Oswald for his time, bought a copy of his book, had him sign it and then invited him to come to the mainland so he could return the hospitality.

George returned to the Atlantis to meet Michael for one final Bahama Mama at Plato’s but stopped along the way to buy some Bahamian Rum cakes and a couple of bottles of Ricardo Coconut Rum, so he could enjoy a little taste of the islands with his friends when he got home! 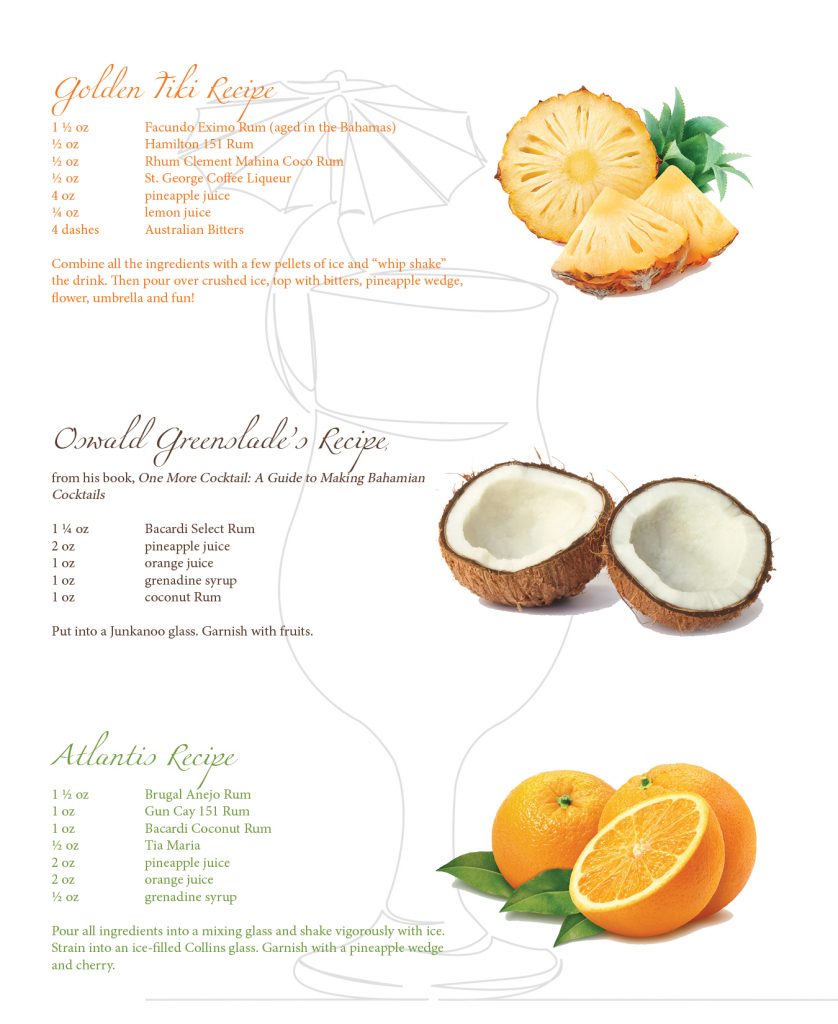